Massive voter turnout has led Democratic nominee Joe Biden to receive more votes for president than any other candidate in US history with 70million counted so far, breaking Barack Obama’s 2008 popular vote record.

The former Vice President racked up more than 70,470,044 votes as of Wednesday at 3.20pm EST, surpassing Obama’s popular vote total of 69.5million.

FiveThirtyEight’s Nate Silver predicts that Biden will get around 52 percent of the popular vote with a turnout of about 80million votes with Trump forecast to pull in 73 to 75million votes. 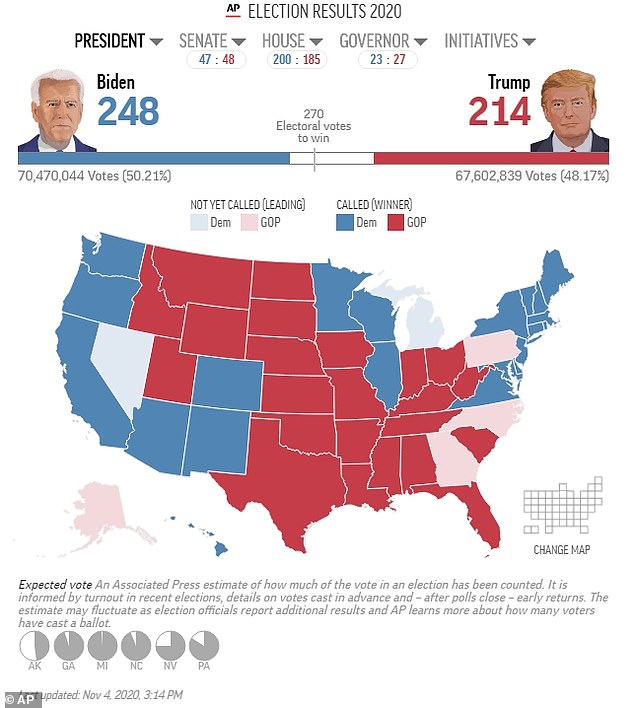 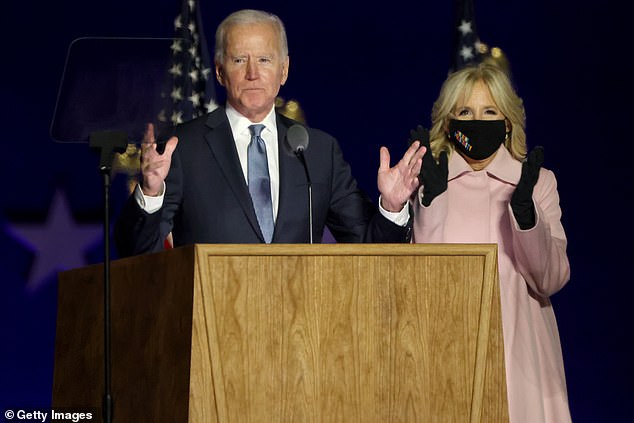 Biden has received now more votes for president than any other candidate in US election history. Biden pictured during his election night rally in the early hours of Wednesday 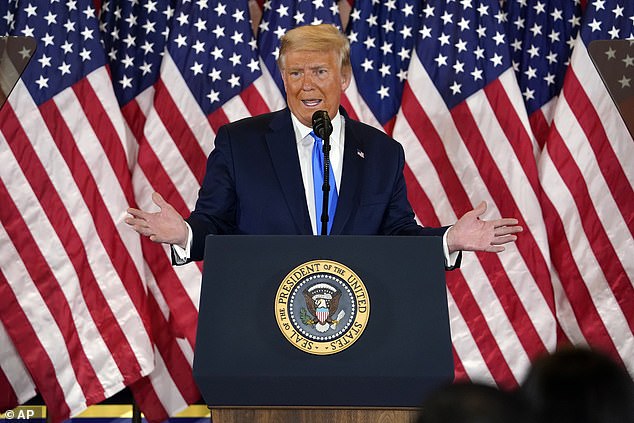 Trump is also projected, along with Biden, to break records and claim to the top two popular vote totals in US history

He said both candidates will likely claim the top two popular vote totals in US history, with both surpassing Obama in 2008.

The 2020 presidential election is expected to have the highest voter turnout since 1908, when 65 percent of eligible Americans voted.

So far the country’s on track to tally 160million votes this year, an eligible turnout rate of about 67 percent.

On Wednesday Biden’s campaign manger declared that he would be elected as the next president after he gained lead in several key swing states.

‘I want to share with all of you that Joe Biden is on track to win this election and he will be the next president of the United States,’ Jen O’Malley Dillon said during a briefing with reporters Wednesday after Tuesday’s intense election night left no clear winner.

‘We believe we are on a clear path to victory by this afternoon. We expect that the vice president will have leads in states that put him over 270 electoral votes,’ she said.

She took aim at Trump who demanded ballots stopped being counted even as absentee ballots are still being tallied across the country as many voters opted to mail in their ballots due to the pandemic.

‘Let’s be extremely clear about something: If Donald Trump got his wish and we stopped counting ballots right now, Vice President Joe Biden would be the next president of the United States,’ O’Malley Dillon said.

The briefing took place after the Trump campaign made a similar claim.

As of Wednesday Biden was edging nearer to election victory after winning the state of Wisconsin and a lead in Michigan with just one percent of the vote there left to count, which has prompted President Trump to claim election fraud, demand recounts and even file lawsuits to try to stop votes from being counted.

Biden won Wisconsin with 20,000 votes. The only votes that are not yet counted are from a small town that is home to 300 people, the state’s Election Commission Administrator Meagan Wolfe said on Wednesday afternoon, giving him a 0.6 % victory with 1.63million votes over Trump’s 1.609million.

Wisconsin gives Biden another 10 electoral college votes and Michigan, which is also in his sights, would bring him another 16.

If he wins Michigan today, and Nevada tomorrow – as Democrats have done in every presidential election since 2004 albeit on a small margin – he will have reached the 270 electoral college votes he needs to claim the White House.

Equally if he wins Michigan today and either North Carolina or Georgia today, he will also have won.

Biden is leading in Michigan by 37,000 votes but there are still 55,000 votes to count, meaning it is still very much in play despite 99 percent of the vote having been counted.

The President is also winning by 9.3% – nearly 400,000 votes – in Pennsylvania, where a result is not expected until Friday and where more than 2million votes remain uncounted.