Joe Biden wins US presidency after defeating Trump in Pennsylvania

Washington: Joe Biden will become the 46th president of the United States after winning the critical state of Pennsylvania, bringing an end to Donald Trump's presidency.

After an excruciating four-day count, Biden's childhood home state of Pennsylvania was called for the long-term Delaware senator and Obama administration vice-president. 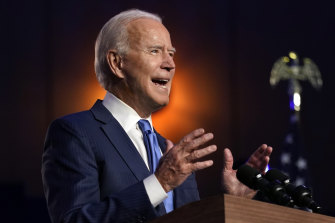 Biden said in a statement: "I am honored and humbled by the trust the American people have placed in me and in Vice President-elect Harris.

"In the face of unprecedented obstacles, a record number of Americans voted. Proving once again, that democracy beats deep in the heart of America. With the campaign over, it’s time to put the anger and the harsh rhetoric behind us and come together as a nation."

Biden – who will be 78 on inauguration day, January 20 – will become the oldest sitting president in US history.

He previously ran for president in 1988 and 2008, but dropped out early after performing poorly in the Democratic primaries.

Biden's victory in Pennsylvania took him to 284 Electoral College votes in the Associated Press's count, pushing him over the 270 votes required to claim the presidency.

Trump, who has claimed the election was marred by widespread fraud, was at his golf course in Virginia when the race was called for Biden. Earlier in the day he had tweeted simply: "I WON THIS ELECTION, BY A LOT!"

The streets of Democratic-leaning cities such as Washington D.C and New York immediately erupted with honking and cheers when media outlets announced Biden as the nation's president-elect.

On the cusp of victory the previous night, Biden addressed the nation from Delaware, claiming a mandate from the American people to take strong action on climate change, the COVID-19 pandemic and systemic racism.

While acknowledging that partisan tensions are running high in the country after the bitterly-contested election, Biden said Americans eventually needed to come together.

"Strong disagreements are healthy; they are a sign of a vigorous debate of deeply held views," he said. 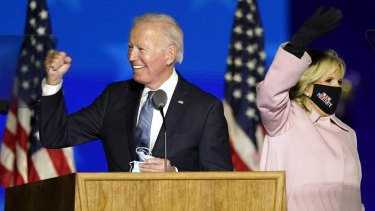 The count continues in other US states Georgia, Arizona and Nevada, with Biden leading in all three.

On Friday, local time, Trump's complaints about the election process were softer than the previous day when he made baseless claims that Democrats were trying to steal the election.

The Trump campaign's attempts to challenge the legality of ballot-counting in Michigan and Georgia were quickly thrown out in those states.

Senior Republicans were also growing more emboldened to push back on the President's claims of rampant fraud. Republican Senator Mitt Romney said Trump was "wrong to say the election was rigged, corrupt and stolen".