John Le Carré died after a fall at his home aged 89, inquest hears

Spy author John Le Carré told doctors he wanted to ‘go home and look after his sick wife’ before he died after a fall at his home aged 89, inquest hears

The spy author John Le Carré told doctors he wanted to ‘go home and look after his sick wife’ before he died after a fall in his bathroom aged 89, an inquest heard.

Le Carré – whose son said was ‘clumsy and heavy of foot’ – suffered fractured ribs following the incident at his home in Cornwall. His condition worsened and he was rushed to hospital where he died on December 12 last year.

Le Carré, born in Poole, Dorset, in 1931, was a novelist and intelligence officer who wrote spy fiction including ‘The Spy Who Came In From The Cold’, ‘Tinker, Tailor, Soldier, Spy’, ‘The Honorable Schoolboy’ and ‘Smiley’s People’.

The coroner read a statement from his son Simon Cornwell who praised staff at the Royal Cornwall Hospital at Treliske who treated his elderly father.

He also said Le Carré had managed two long walks on Hampstead Heath but that 20 years ago he had taken tumbles while walking the cliff paths in Cornwall when he was immersed in his own thoughts. 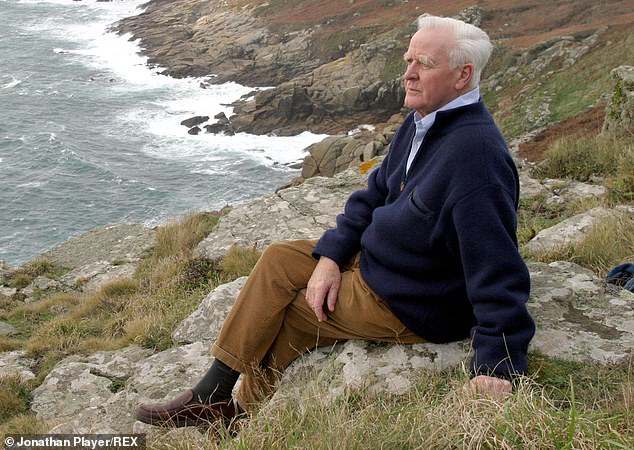 John Le Carré (pictured above, in 2003) – whose son said was ‘clumsy and heavy of foot’ – suffered fractured ribs after a fall in the bathroom at his home in Cornwall aged 89

His half-brother Nick said that the author and former MI5 and MI6 intelligence officer had suffered the fall on December 7th at his cliff top home at Tregiffian near Land’s End.

Le Carré’s wife Jane was seriously ill herself at home at the time and Nick believed his father would be discharged from hospital and return home soon.

The author had earlier told doctors that his wish was to go home and be with his wife who herself was seriously unwell.

His wife was admitted to the same hospital on the day he died, and she too passed away at home in late February from a cancer which had returned late last year.

Mr Cornwell said: ‘I understood dad had got up in the night and slipped or tripped in the bathroom and fallen against the toilet or the bidet.’

He said his father’s mobility had been reduced but he was ambitious and he would generally decline an arm of support.

Mr Cornwell added that his father was ‘clumsy and heavy on his feet’ and less steady as he got older.

But he also said he played football with Nick’s young sons aged seven and ten as Nick hovered behind him in case he had to ‘nudge him back upright’. 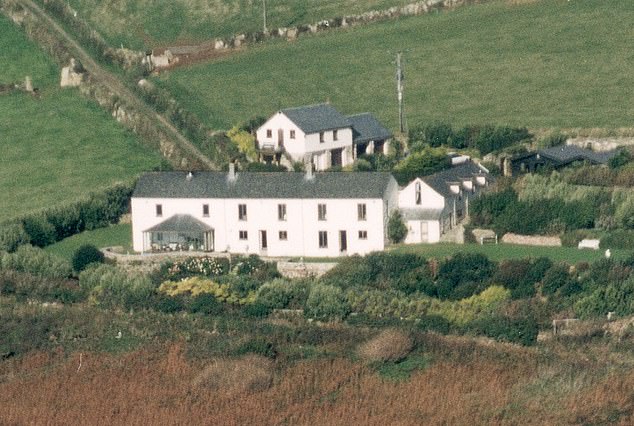 Le Carré’s cliff top home at Tregiffian near Land’s End, pictured above. His son said 20 years ago the author had taken tumbles while walking the cliff paths in Cornwall when he was immersed in his own thoughts

And Le Carré had asked for his favourite walking stick to be brought to Cornwall for his use around his house and added that he was ‘proud and determined’ to lead his life.

Before he died Mr Le Carré left a voicemail message for Nick to say ‘what a friendly place the hospital was’ – it was the final contact from him.

Simon said he wanted to give a ‘shout out’ to the intensive care unit in his father’s final days who did ‘everything they could to save dad’.

The coroner was told Le Carré was suffering from metastatic prostate cancer and was treated in London with PSMA Lutetium therapy which had been successful.

But he was waiting for an ECG for a heart murmur but that was postponed because of the pandemic.

In November last year he complained to his GP of a chronic cough but his chest was clear. 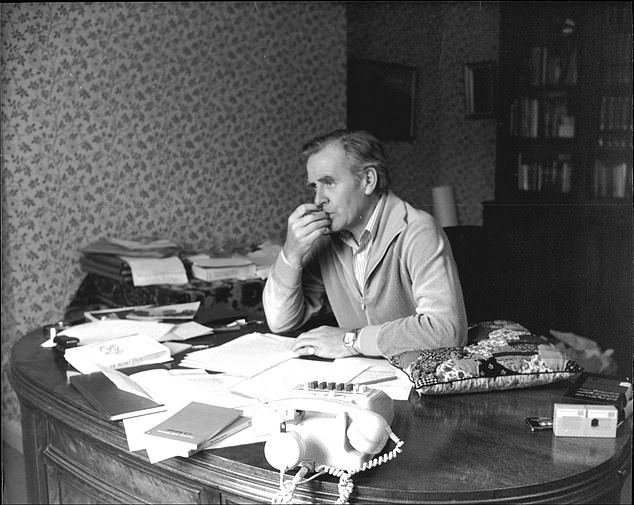 A younger Le Carré pictured sitting at his desk while deep in thought. He was a novelist and intelligence officer who wrote spy fiction including ‘The Spy Who Came In From The Cold’ 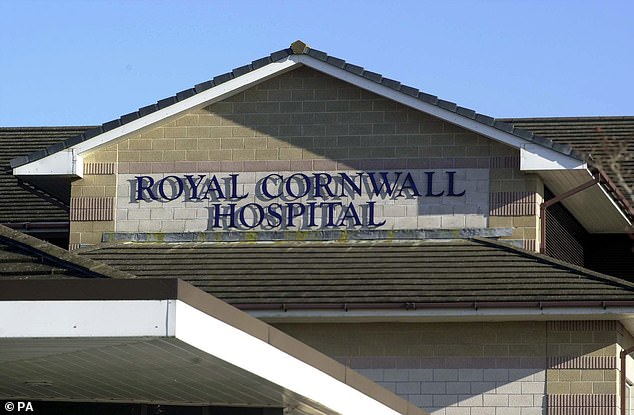 But on December 4 he suffered the bathroom fall injuring the left side of his chest and had tender ribs which he had fractured.

He was prescribed medication but four days later he became suddenly unwell and it was thought he had suffered a pulmonary embolism and was rushed into intensive care.

He was tested for Covid-19 and that was negative but his condition rapidly deteriorated and he died on the evening of December 12 from community acquired pneumonia and cancer.

He said he had gone to use the bathroom at night but had not anticipated falling which led to his decline and death.

Mr Cox sent his condolences to his family who did not attend the inquest as they had no issues or concerns raised to his cause of death.

John Le Carré: The former spy who became one of Britain’s most critically acclaimed authors 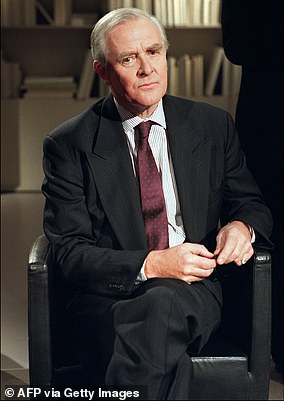 John le Carré – real name was David Cornwell – was born in Poole and educated at Sherborne School and worked for both MI5 and MI6 in the 1950s and 1960s.

After joining the Intelligence Corps of the British Army in 1950, he later worked covertly for MI5, spying on left-wing groups at Lincoln College, Oxford, to detect any potential Soviet agents.

Le Carré’s own upbringing is said to have played a key part in his interests in subterfuge.

His father, who was described as a ‘five-star conman’, was a con man who was an associate of gangsters and spent time in jail for insurance fraud.

His mother deserted the family home when he was just five-years-old after walking out on her abusive husband – but Le Carré managed to track her down when he was 21.

Le Carré’s career as a spy came to an end when it was revealed Kim Philby, one of the infamous Cambridge Five, had shared his true identity with Soviet Russia.

He went on to write 25 books under the pen name John Le Carré, as a means of getting round a ban on Foreign Officers publishing works under their own name, with his body of work dating back to 1961.

The works of Le Carré were often praised for stripping away the glamorous life of a spy often depicted in James Bond novel and instead focusing on the grittier, darker aspects of the job despite one former MI6 boss once claiming his books had given the group a ‘bad name’.

In a career that spanned nearly 50 years, he would become famed for works such as Tinker Tailor Soldier Spy and The Spy Who Came in from the Cold, both of which would become successful film adaptations and contain his renowned character, George Smiley.

The father-of-four, who turned down literary honours and a knighthood, spent lockdown at his Cornish home and was outspoken about the Government’s handling of the pandemic.