La Palma: A volcano erupted on La Palma in the Spanish Canary Islands on Sunday, sending jets of lava and a plume of smoke and ash into the air from the Cumbre Vieja national park in the south of the island.

Authorities had begun evacuating the infirm and some farm animals from surrounding villages before the eruption at 3.15pm local time (11pm AEST) on a wooded slope in the sparsely populated Cabeza de Vaca area, according to the Canary Islands government. 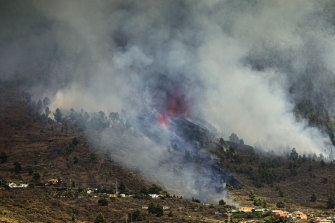 Smoke rises after a volcano on the island of La Palma in the Canaries erupted on Sunday.Credit:AP

Two hours later, with rivers of lava edging down the hillside, the municipality issued a mandatory evacuation order for four villages, including El Paso and Los Llanos de Aridane. Soldiers were deployed to help. Residents were asked to keep mobile phone use to a minimum.

La Palma, with a population of 85,000, is one of eight islands in Spain’s Canary Islands archipelago off Africa’s western coast. At their nearest point, they are 100 kilometres from Morocco.

A 4.2-magnitude earthquake was recorded before the eruption, which took place in an area known as Cabeza de Vaca on the western slope as the ridge descends to the coast.

Video footage showed fountains of red molten lava shooting into the sky, and plumes of smoke could be seen from across the island.

“In no circumstances go near the lava flow,” the municipality warned residents. “If there is volcanic ash, stay in your houses.”

Stavros Meletlidis, a doctor of volcanology at the Spanish Geographical Institute, said the eruption had opened up five fissures in the hillside and that he could not be sure how long it would last.

“We have to measure the lava every day and that will help us to work it out,” he said.

Canary Islands President Angel Victor Torres told TVE that no injuries had been reported so far, but the municipality said several roads had collapsed.

Prime Minister Pedro Sanchez tweeted that he had postponed his trip to the United Nations General Assembly in New York and was on his way to La Palma.

Flights to and from the Canaries were continuing as normal, the airport operator Aena said.

La Palma had been on high alert after more than 22,000 tremors were reported in the space of a week in Cumbre Vieja, a chain of volcanoes that last had a major eruption in 1971. It is one of the most active volcanic regions in the Canaries.

The earliest recorded eruption in La Palma was in 1430, according to the Spanish National Geographical Institute.

In 1971, one man was killed as he was taking photographs near the lava flows, but no property was damaged.