Lawyer ‘not in a relationship’ with Roberts-Smith, court told

A lawyer acting for Ben Roberts-Smith in his proceedings against his ex-wife is “not in a relationship” with the former special forces soldier, his barrister has said in a fiery hearing after questions were raised by a Federal Court judge.

Mr Roberts-Smith launched urgent Federal Court proceedings last week against his former wife, Emma Roberts, who is expected to give evidence for The Age and The Sydney Morning Herald in her ex-husband’s high-stakes defamation case against the mastheads. 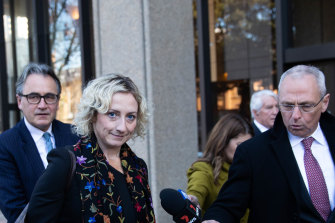 The case against Ms Roberts relates to whether she had access to legally privileged or confidential information from an email account used by Mr Roberts-Smith, and if any information was given to the media outlets.

Urgent orders were made in the case on June 1 in the absence of Ms Roberts.

But Justice Robert Bromwich said on Wednesday he had become aware of “media reporting since then” which suggested a lawyer who swore a crucial affidavit in the case against Mr Roberts-Smith’s ex-wife had been in a relationship with Mr Roberts-Smith at some stage.

Justice Bromwich did not name the lawyer, but media reports since August 2020 have suggested Mr Roberts-Smith and his solicitor Monica Allen, who is also acting for the former soldier in his defamation case, had spent time together socially.

“I wasn’t aware of any of this … I’m uncomfortable with the situation,” Justice Bromwich said.

He said he was “not taking those media reports as being accurate or inaccurate” and “it may all be false” but “I thought I had to raise it”.

Justice Bromwich said if a “material disclosure” had not been made it “has the potential to unravel the entirety of the orders I made on 1 June”.

Justice Bromwich said there was a “world of difference” between a solicitor at arm’s length deposing to certain matters in a court case, and a solicitor in a relationship with Mr Roberts-Smith doing so.

But Arthur Moses, SC, for Mr Roberts-Smith, said “female lawyers have enough to deal with in this profession without these aspersions being put against them”.

After a brief adjournment, Mr Moses returned to court on Wednesday afternoon and said: “The applicant and the deponent are not in a relationship, full stop.”

Asked by Justice Bromwich why he didn’t say that in the morning, Mr Moses said: “The solicitor was in a closed court [in the defamation proceedings] … I had no notice of Your Honour raising that issue with me.” 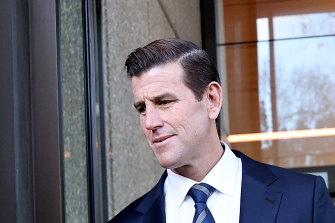 Ben Roberts-Smith outside the Federal Court on Thursday.Credit:Dylan Coker

It was initially unclear which media reports to which Justice Bromwich was referring, but later on Wednesday it appeared likely he was referring either to a gossip item in The Australian Financial Review, or a story in the Herald on June 7. Both mastheads are owned by Nine.

Justice Bromwich said he couldn’t be “100 per cent certain” when shown the Financial Review article by Mr Moses.

Mr Moses raised questions about whether the articles had a tendency to intimidate or threaten lawyers in the defamation proceedings, a “very serious issue” that might constitute contempt of court on Nine’s part.

He raised concerns about the “potential harassment and belittling of a female practitioner”.

The defamation trial started on Monday and is estimated to run for up to 10 weeks.

Mr Roberts-Smith launched the defamation lawsuit in 2018 over reports in The Age, the Herald and The Canberra Times that he says accused him of murder during his 2009 to 2012 tour of Afghanistan and committing an act of domestic violence against a woman with whom he was having an extramarital affair. Along with the two media outlets now owned by Nine, he is suing three journalists and The Canberra Times, which is now under separate ownership.

He denies all wrongdoing. The outlets are seeking to rely chiefly on a defence of truth.

Mr Roberts-Smith was expected to appear in the witness box on Wednesday in the defamation proceedings but the hearing was adjourned until Thursday to allow the parties to deal with preliminary issues.