The Marine Corps is relieving a two-star general of his duties in connection with an assault amphibious vehicle accident last year that left nine service members dead, the military said Wednesday.

The incident, which took place off California’s San Clemente Island on July 30, was described as the worst amphibious assault vehicle (AAV) accident in Marine Corps history.

Maj. Gen. Robert F. Castellvi, who was suspended in April from his new position as the Marine Corps inspector general, was the former commanding general of 1st Marine Division, which was in charge of the AAV platoon when their landing craft sank during the exercise, according to reports. 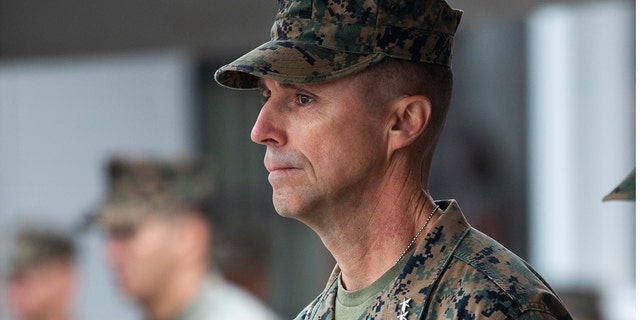 “The commandant [Gen. David Berger] took adverse administration action against [Castellvi],” the Corps said in a statement, according to Stars and Stripes. “The commandant personally and formally counseled him for his failure to properly train the Marines and sailors for whom he was entrusted and for the inadequate evaluation of the AAV platoon before it was attached to the 15th MEU.”

An investigation published in March found that human and mechanical failures caused the sinking of the AAV. It said that inadequate training of troops, inadequate maintenance of the 35-year-old AAV and poor judgment by commanders contributed to the tragedy.

“Contributing factors included lack of training, the material condition of the AAVs assigned to 15th Marine Expeditionary Unit, lack of safety boats in the water, a higher-than-anticipated sea state, and insufficient buoyancy provided by personal flotation devices at depth,” the Marine Corps said in a statement about the findings.

The investigation also noted that Castellvi “bears some responsibility,” for the incident, The Associated Press reported.

In May, a second probe was launched that found the troops hadn’t been given the proper instruction for escaping the AAV.

Castellvi was relieved of his duties after family members of the eight Marines and one Navy sailor killed in the incident questioned why no generals were being held accountable.

One of the Marines, Lance Cpl. Guillermo S. Perez, 19, was pronounced dead on the scene while seven others and a Navy corpsman were later recovered when the vehicle was found on the ocean floor.

Castellvi’s punishment did not include a reduction in rank, Stars and Stripes reported. The action against him will go on his permanent record and will be taken into consideration as to whether the Marine Corps will promote or retain him.

“This action typically prevents an officer from being promoted or serving in a role where he/she would be charged with the responsibility of caring for Marines and sailors,” the Marine Corps said.

At least three other commanders have been dismissed following the incident, including the leader of the 15th Marine Expeditionary Unit.

Fox News’ Sam Dorman and The Associated Press contributed to this report.