London: Six countries are now affected by the widespread outbreaks of coronavirus in the Denmark's mink farms, says the World Health Organisation.

Mink in the country were infected with the virus that causes COVID-19 following exposure from infected humans, the WHO said. 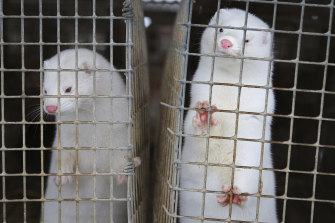 There are nearly 1200 mink farms in Denmark.Credit:AP

Six countries – Denmark, the Netherlands, Spain, Sweden, Italy and the US – have reported SARS-CoV-2 in farmed mink to the World Organisation for Animal Health. The WHO said SARS-CoV-2 strains infecting mink, which are subsequently transmitted to humans, may have acquired "unique combinations of mutations".

Advanced laboratory studies are required to fully understand the impact of specific mutations.

Since June, 214 human cases of COVID-19 have been identified in Denmark with SARS-CoV-2 variants associated with farmed mink, including 12 cases with a unique variant reported on Thursday.

All 12 cases were identified in September in North Jutland, Denmark, and the cases ranged in age from seven to 79 years, with eight having a link to the mink farming industry, while four cases were from the local community.

The WHO said that while initial observations suggest the cases are similar to that of other SARS-CoV-2 viruses, it added that this "cluster 5" variant had "a combination of mutations, or changes that have not been previously observed".

"As viruses move between human and animal populations, genetic modifications in the virus can occur," the WHO said.

Although the virus is believed to be ancestrally linked to bats, the origin of SARS-CoV-2 has not yet been identified.

Several animals in contact with infected humans, such as mink, dogs, domestic cats, lions and tigers, have tested positive for SARS-CoV-2.

Ian Jones, professor of virology at University of Reading, said: "The danger is that the mutated virus could then spread back into man and evade any vaccine response which would have been designed to the original, non-mutated version."

British national or resident travellers who have been in or through Denmark in the last 14 days will be denied entry into the UK, but the government is not planning on extending the travel ban to other countries affected by the mink outbreak.