A LIVE streamer saved a man from a brutal attack in central London and captured it all on camera.

The streamer, who goes by the name Sherwin, was strolling through the streets thought to be near Leceister Square when he spotted the shocking scrap in the middle of the road. 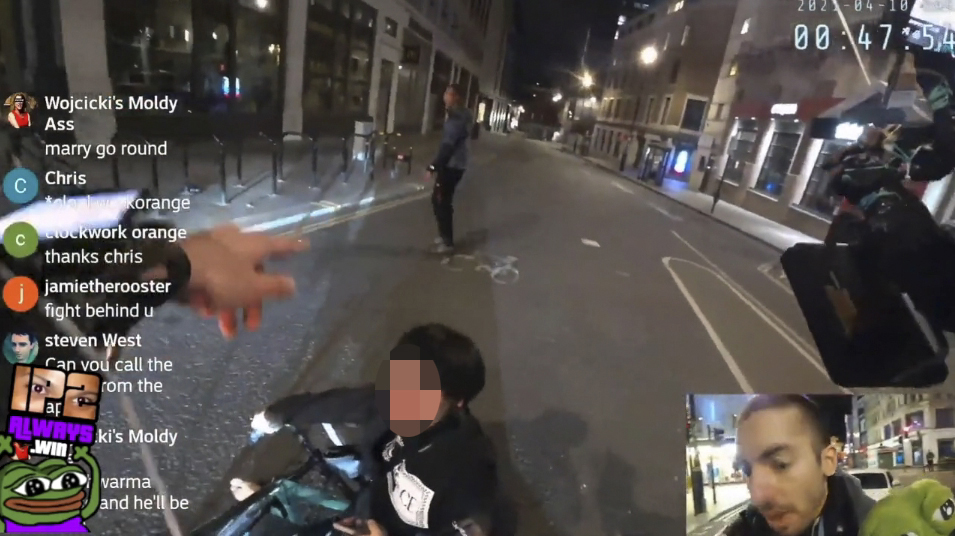 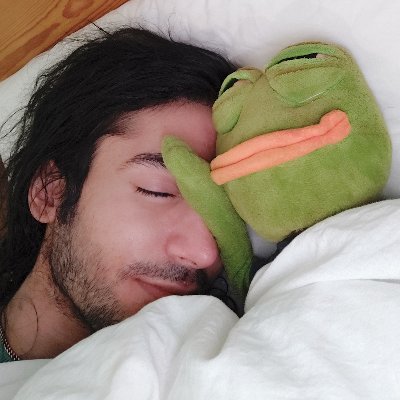 The footage, shared on Reddit, shows Sherwin run over to the victim, who is entangled amongst his bike and recoiling as the unidentified attacker lets rip.

"What's going on? Oh is he getting attacked? Leave him alone! Leave him alone!" Sherwin can be heard shouting as he springs into action and puts himself in between the two.

The assailant briefly scurries away as the streamer gallantly guards the man on the floor, before returning to attempt to attack the victim a further two times.

The casualty can be heard repeatedly begging Sherwin to "Call the police!" as the attacker slips away in the distance.

A group of passers-by also stop in the aftermath to offer their assistance as the victim details the attack while on the phone to the emergency services.

The terrified man cries out, "Help me help me!" before he goes on to explain, "I almost got murdered man".

He describes the attacker as "armed and dangerous" and claims he tried to rob him, before the police and an ambulance promptly arrive on the scene. 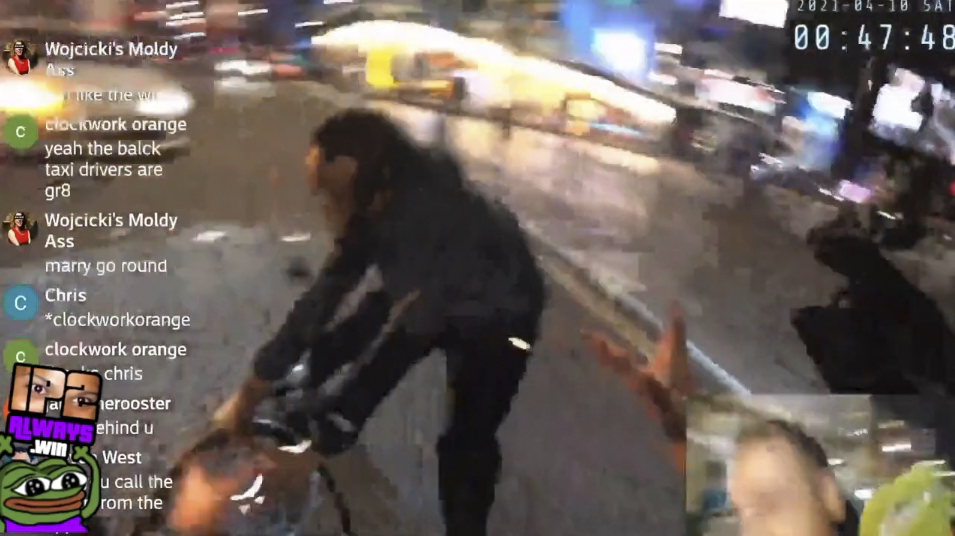 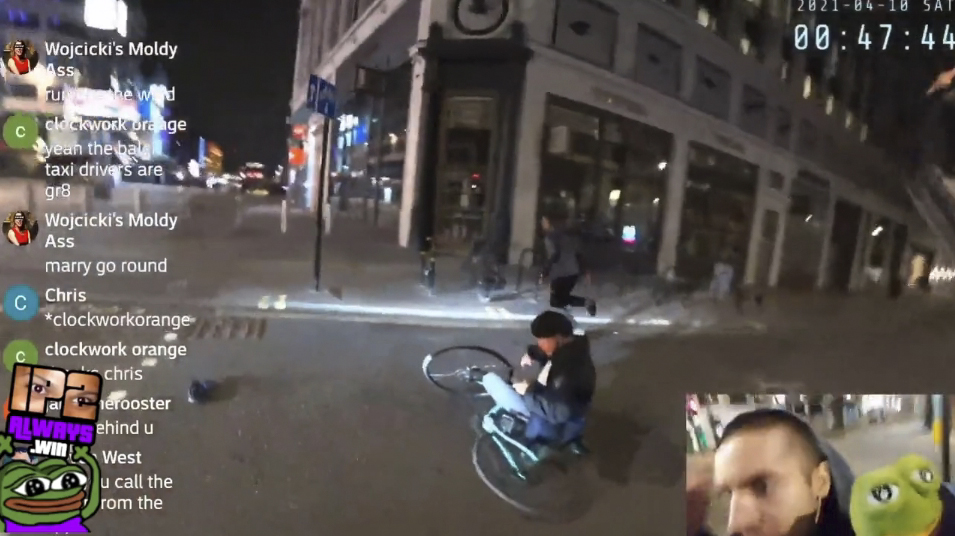 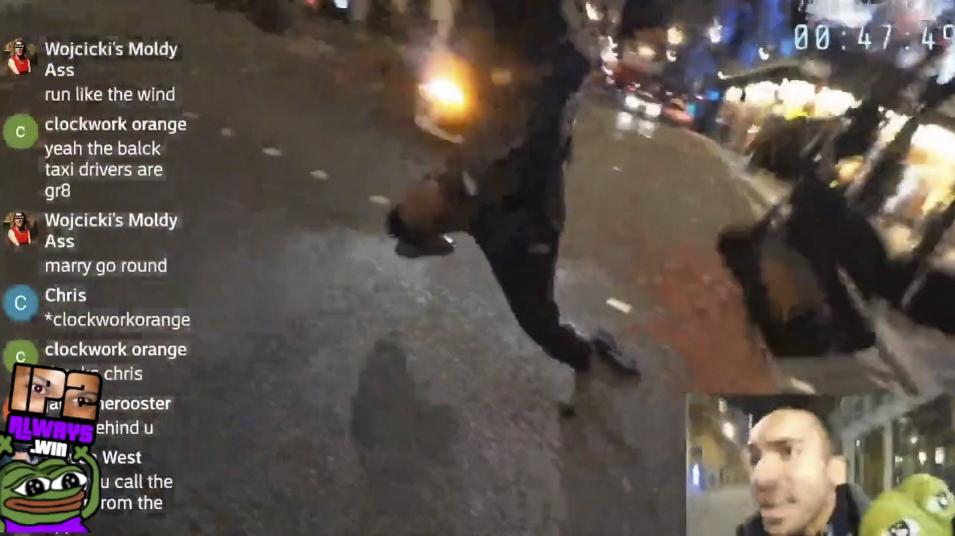 The victim remained coherent but could be seen bleeding from the face in the live stream footage.

Sherwin, who describes himself on his YouTube channel as an "Autistic IRL Live-streamer", has been commended for his bravery during the unnerving attack across social media.

He often posts streams of his day-to-day activities, accompanied by a plush cuddly toy that resembles the notorious meme, Pepe the Frog.

As well as capturing the callous assault on film, Sherwin's double-sided camera also recorded his own impressive reaction.

The video, posted on April 10, has been viewed nearly 20,000 times and has acquired almost 1,000 comments praising his actions.

One admirer wrote: "Big props to the streamer though, realises what’s happening at a glance. Acts upon it immediately, and knows it in his mind he has to be loud and attract attention as much as possible so people come.

"I don’t think there’s even something he could’ve done better to help that guy there." 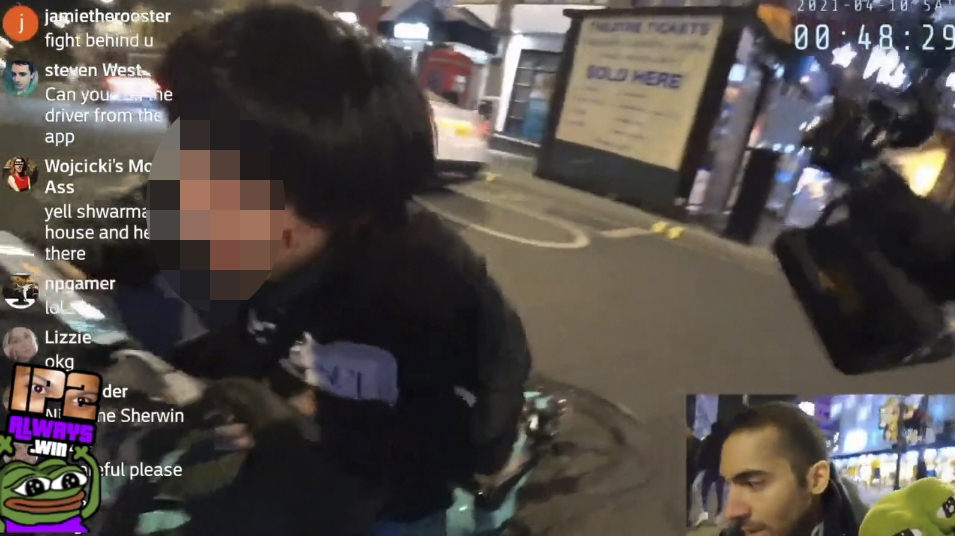 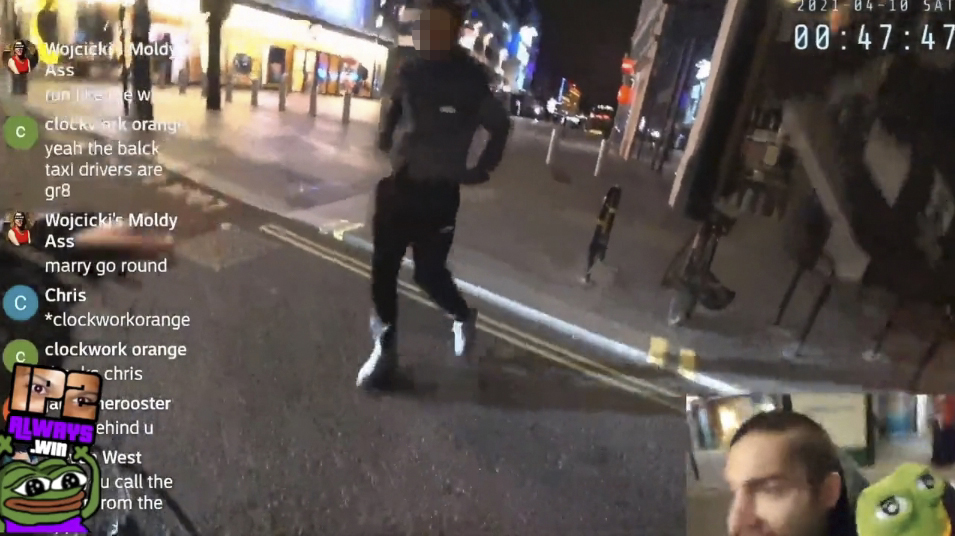 Another used added, "Mad respect to this streamer. The world needs more people like him. Very heartwarming to see."

"In that flash of a moment Sherwin showed that he's the hero we all wish we could all be. Sherwin, you went straight for the scene without a thought for yourself and scared off a guy," another applauded.

"It was your unhesitating courage that made the predator drop his prey and flee on confusion. This is one of the most extraordinary things I have seen."

Others slammed the audacity of the attacker, writing: "I can’t believe the thief tried to come back TWICE. Even after he saw he was on camera and the police was being dialled."

It read: "The admiration, love, appreciation is too cool. Thank you for all the kind messages and comments I'm not used to this I know what it's like to be attacked for no good reason.

"I'm super glad I instinctively reacted fast. I'm happy I saved someone who was in serious danger."

It is not clear if any arrests were made in the wake of the attack.