Neighbours saves a toddler dangling from a three-storey window

Two Chinese men have been hailed as heroes after climbing up a building’s façade with bare hands to save a two-year-old boy.

The toddler got his head trapped between the bars of a window grille three storeys up after accidentally falling out of his flat while being left at home alone on Sunday in north-western China.

Heart-stopping footage shows the youngster helplessly kicking his legs in the air while dangling down by the neck at over 30 feet above the ground before the neighbours rushed to the child’s rescue. 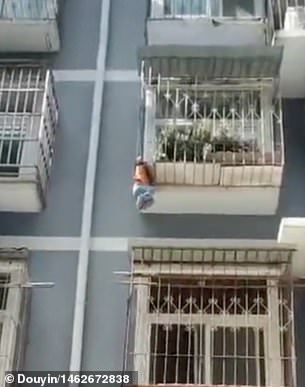 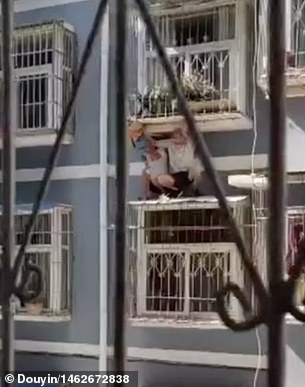 The little boy has survived unhurt from the terrifying incident that took place in Wenxian county of north-western China’s Gansu province.

The toddler accidentally fell out of the three-storey flat after he was left at home alone by his grandmother, according to local outlet Wenxian Media.

One of the saviours, Feng Gang, first spotted the youngster being trapped by the neck between the window grille after hearing him crying.

Mr Feng, a forest keeper who lives in the building opposite to the boy’s home, rushed to the child’s rescue after scaling the building’s façade without any protection.

The second neighbour, Zhao Xiaoping, followed suit and climbed up the exterior wall after noticing the trapped toddler.

The two residents supported the child for about 10 minutes to prevent him from suffocation before the boy’s family arrived to lift him back from inside.

They climbed down to the ground through a fire service ladder after firefighters were called to the scene shortly after.

Chinese web users praised the neighbours for their courage after the footage filmed by an onlooker was shared online.

One commenter wrote: ‘Thumbs up for the two heroes who saved a family!’

Another one said: ‘Thanks to these selfless and brave men, well done!’

A two-year-old Chinese girl also survived unhurt after getting her head trapped between the bars of a window grille five storeys up while being left at home alone earlier this month.

She was saved by her neighbour who rushed to the child’s rescue after climbing up the exterior wall with his bare hands along a gas pipe in Guangxi province of southern China.