Hundreds of NHS workers are taking to the streets of London to protest against their exclusion from a recent public sector pay rise announcement.

Anger is mounting as NHS workers were overlooked in the latest round of public sector pay rises – despite more than 500 NHS and social care staff dying from Covid-19.

Unite, which has a 100,000 members in the health service, is supporting its members wishing to attend the socially-distanced protests, so that the government can see the depth of discontent and frustration of NHS staff, they say, who continue to be in the frontline in the battle against Covid-19.

Protesters made their way along Whitehall towards Downing Street.

Many were carrying placards, including one which said: ‘Boris remember my neighbour Lewis, what about his pay rise?

‘He saved your life now reward us.’ 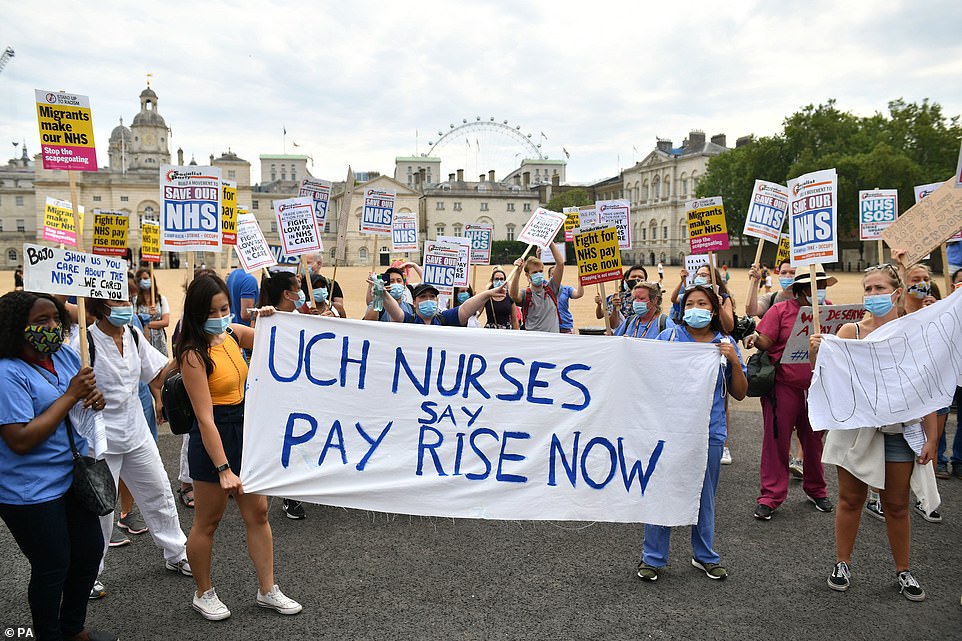 NHS workers gathered in St James’ Park, London, to protest against their exclusion from the most recent public sector pay rise announcement. Thousands are expected to attend the socially distanced protest which forms part of a national demo 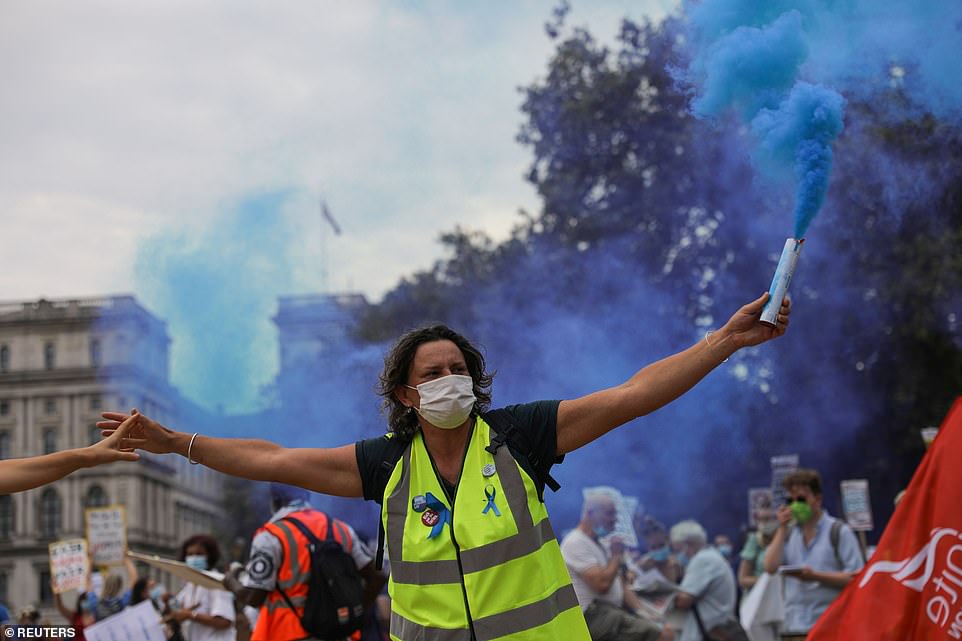 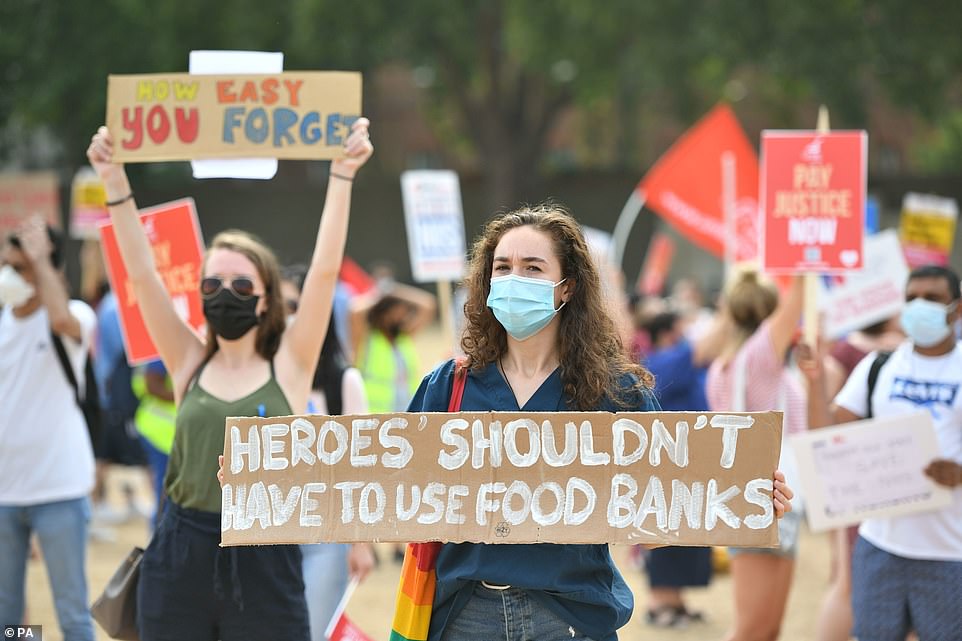 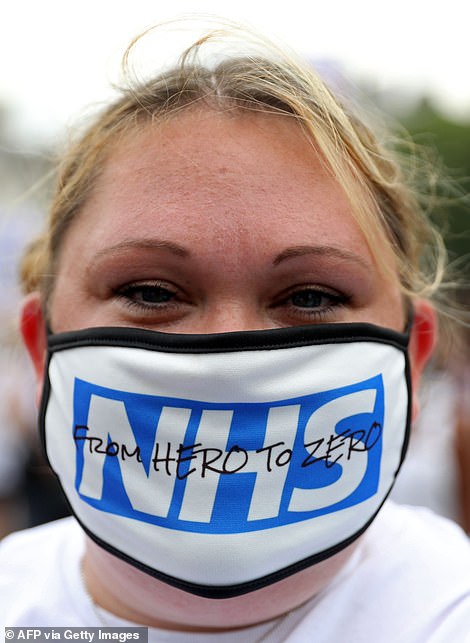 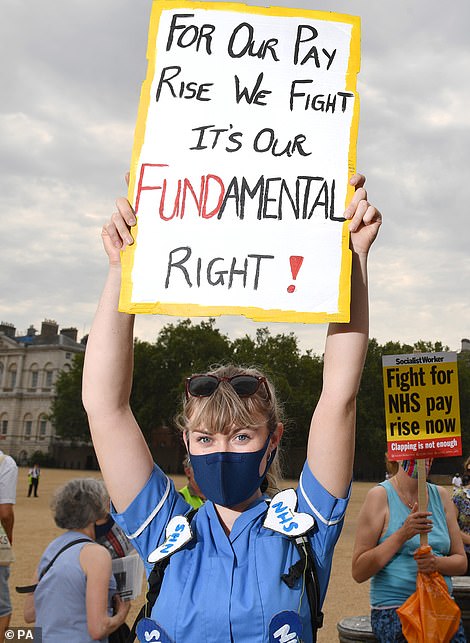 Unite has said that it is seeking a substantial pay increase for its members.

A key demonstration got underway in London, starting at 11.00 am at St. James Park, with protesters then marching along Whitehall to Downing Street and ending with a rally at Parliament Square.

Pictures show hundreds of protesters in masks marching with banners through the capital.

Unite national officer for health Jackie Williams said: ‘Nursing staff and other allied health professionals have reacted with anger to being overlooked when pay rises were given to many in the public sector last month and the government not hearing the health trade unions’ call to bring their pay rise forward from April 2021.

‘Last week, health workers marched to Downing Street to vent their anger that all their efforts during the pandemic, which has claimed so many of their colleagues’ lives, have appeared to be ignored when it comes to recognition in their pay packets.

‘In a decade of Tory austerity, NHS staff has seen their pay cut by 20 per cent in real terms – and no amount of Thursday evening clapping and warm ministerial words can compensate for this dramatic loss in income. 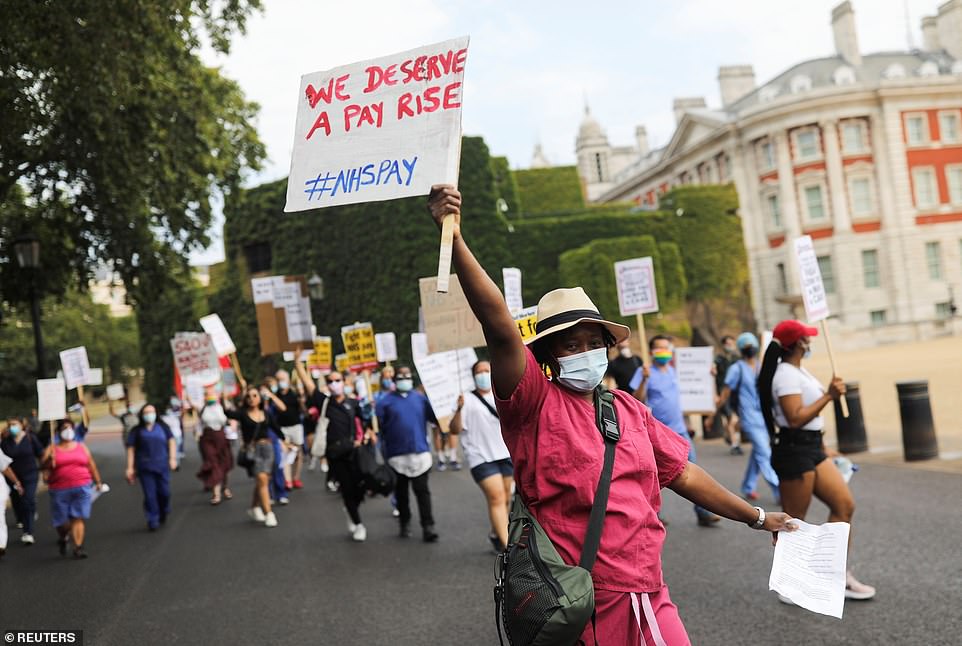 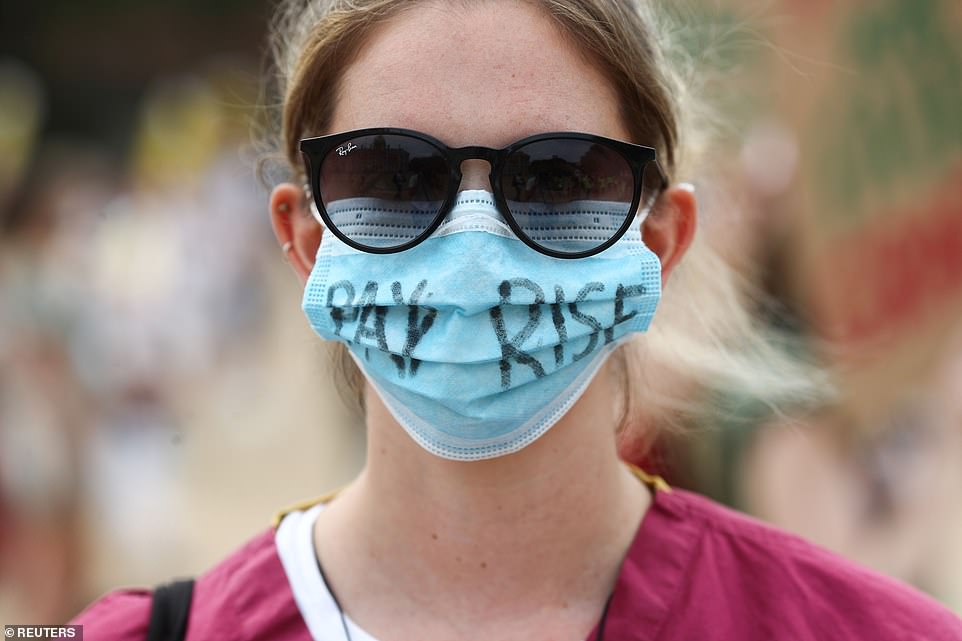 A protestor wearing a face mask attends a demonstration of NHS staff, unions and campaigners protesting the government’s handling of the coronavirus disease (COVID-19) crisis, in London, and how some NHS workers were excluded from pay rises 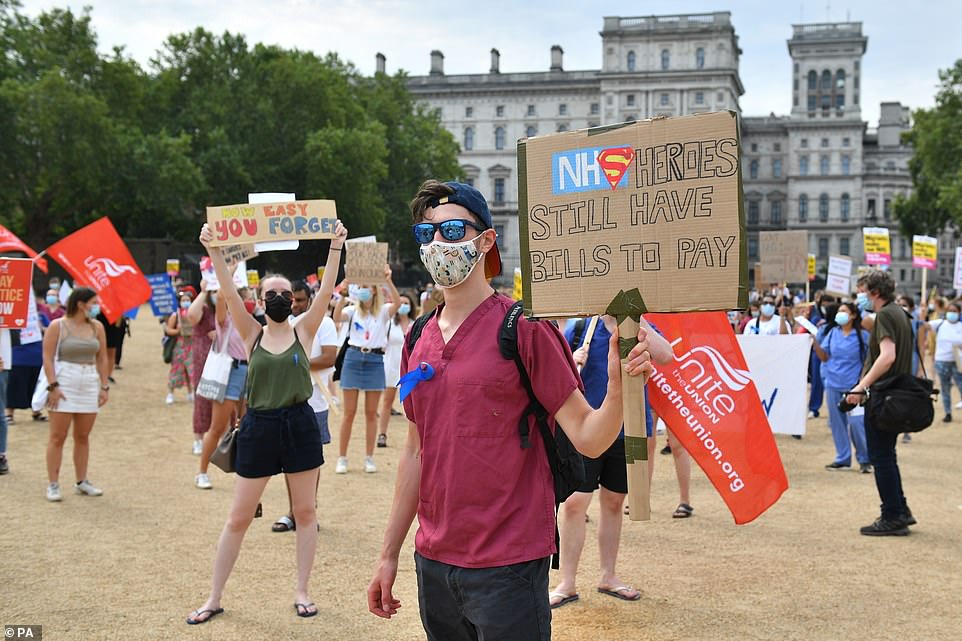 Despite the public and many high profile government figures showing support by clapping for the NHS on Thursdays earlier this year, NHS workers say they deserve a substantial pay increase that reflects their worth to society during the pandemic

Who received a Covid-19 pay rise from the government in July?

‘Poor rates of pay have contributed to the estimated 100,000 vacancies in the NHS and ensuing ‘recruitment and retention’ crisis.

‘Unite is supporting our members wishing to turn out on Saturday. There will be a broad-based rolling campaign for NHS pay justice that will continue for the rest of the year.

‘The public expects – and ministers should deliver – a substantial pay increase for NHS staff that reflects their real worth to the NHS and society more generally. NHS workers shouldn’t have to wait till April 2021.’

Last month, the Government announced nearly 900,000 workers will benefit from a pay rise to reflect their ‘vital contribution’ during the coronavirus pandemic.

Teachers and doctors will see the largest rise at 3.1% and 2.8% respectively ‘recognising their efforts on the frontline during the battle against COVID-19’ the Government said.

The Government said more than one million NHS workers not included in the latest pay rises will continue to benefit from the three-year Agenda for Change pay deal made in 2018.

The next pay rise will be due in April 2021, but unions say the government should bring it forward to this year to thank NHS staff for their sacrifices during the pandemic.

Demonstrations are also set to take place in towns and cities around the UK including in Basildon, Glasgow, Manchester, Liverpool and Ipswich.

A statement from Nurses United, an organisation that helped set up the demonstrations, said: ‘NHS workers care for our patients and place public safety as an utmost priority, which is why we are taking action to improve the pay of all NHS staff. 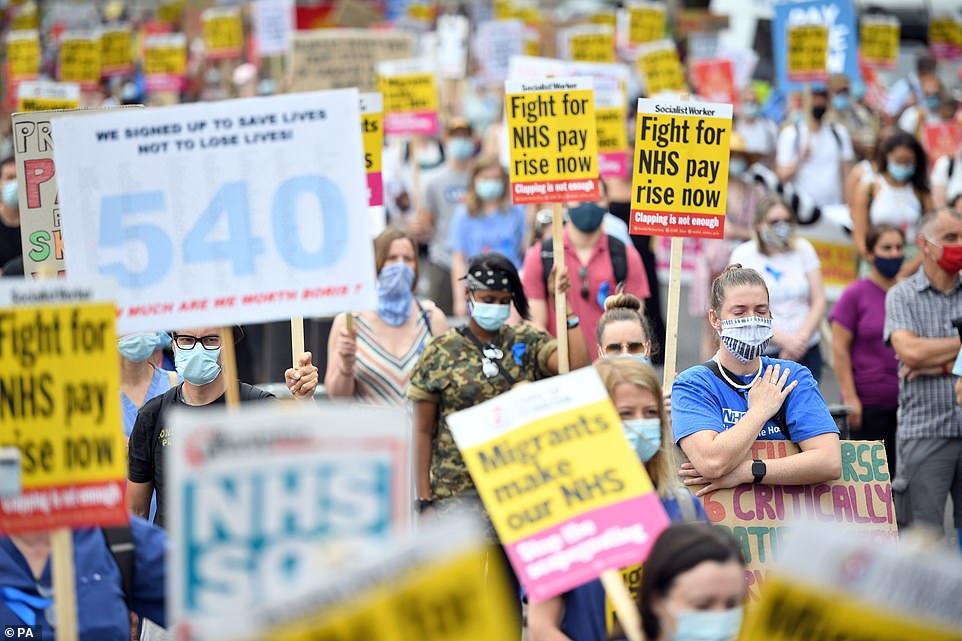 A two minute silence takes place in St James’s Park, London, as anger is mounting as NHS workers were overlooked in the latest round of public sector pay rises – despite more than 500 NHS and social care staff dying from Covid-19 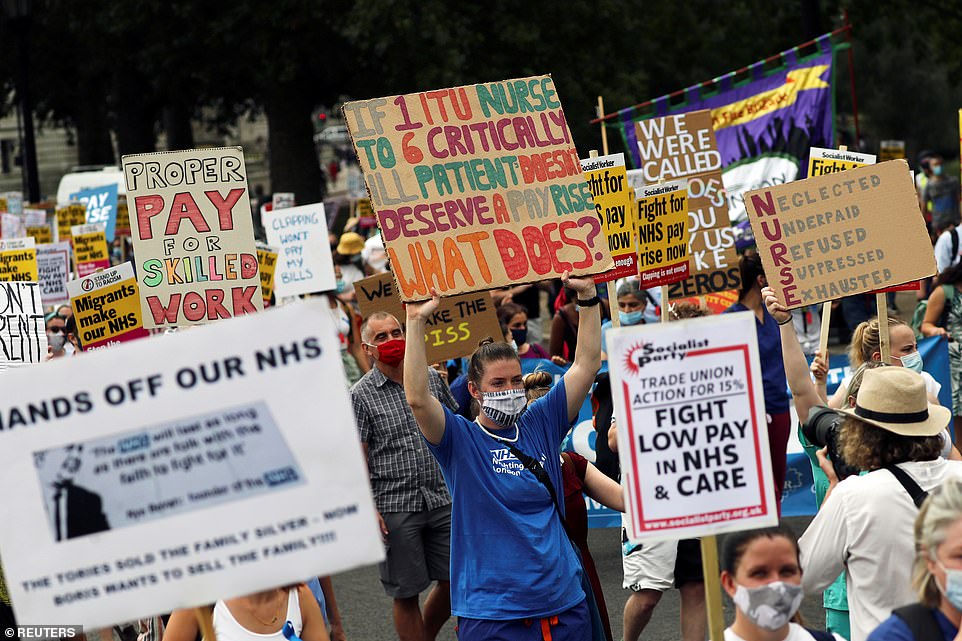 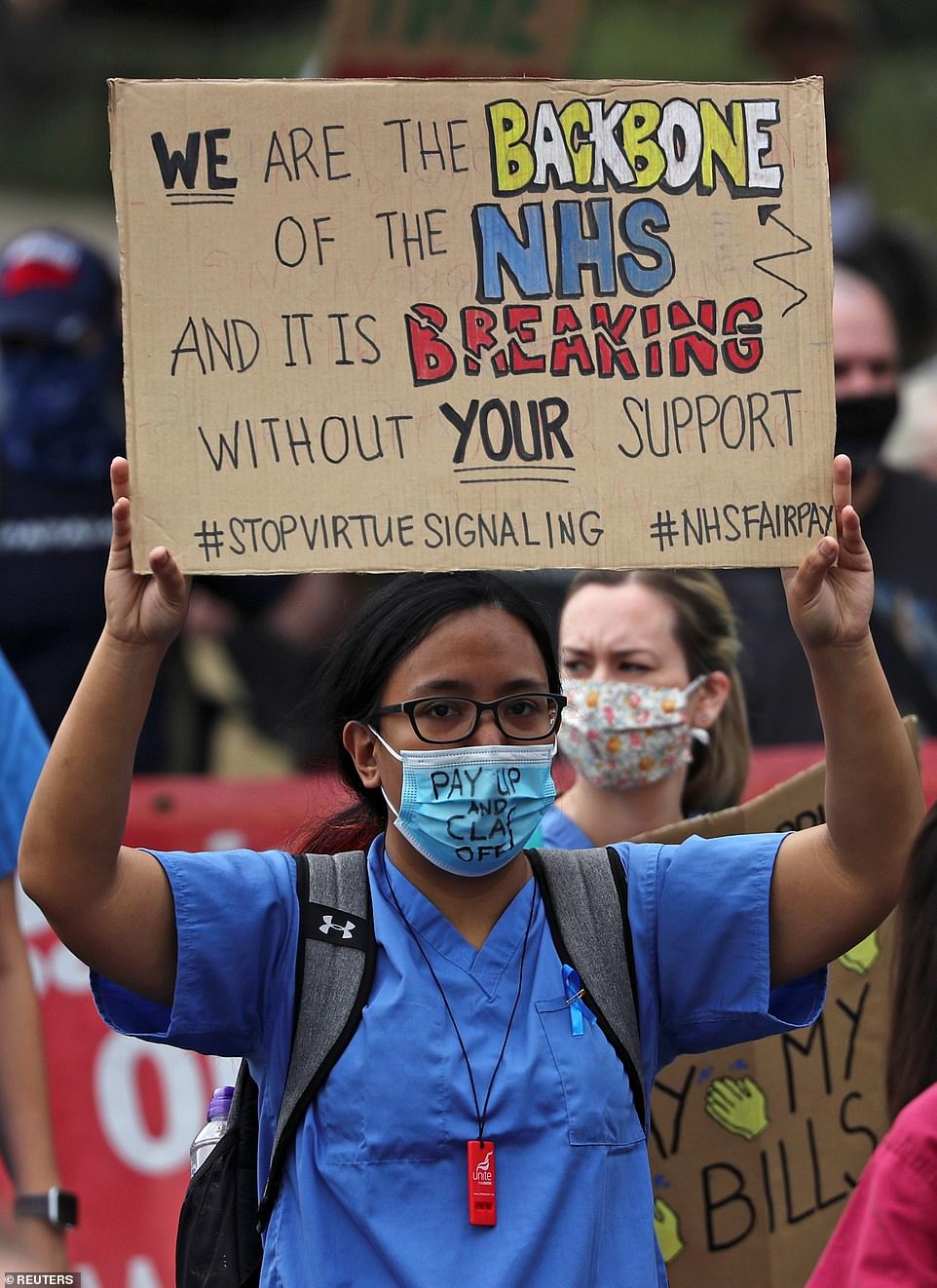 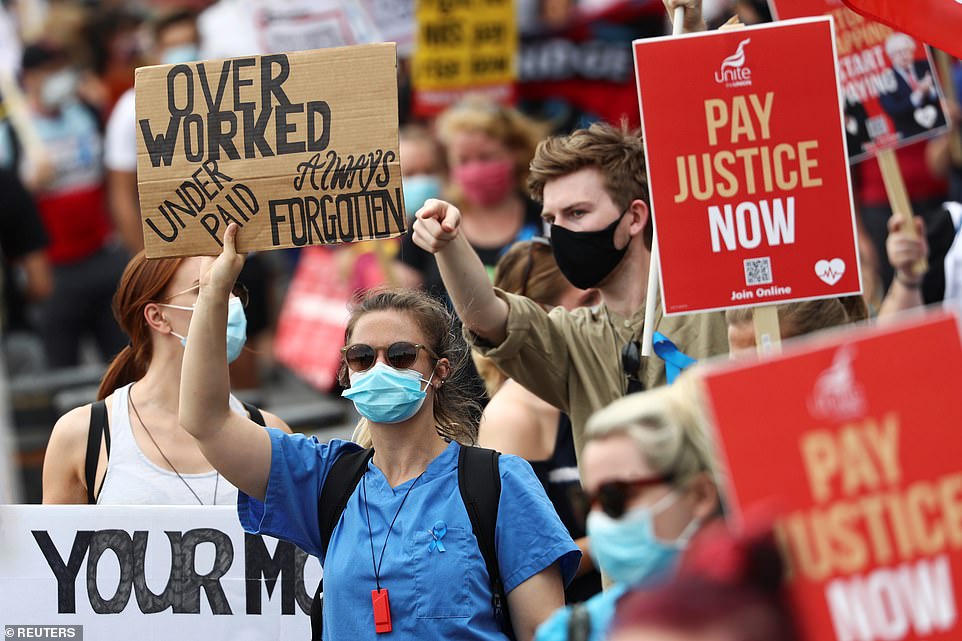 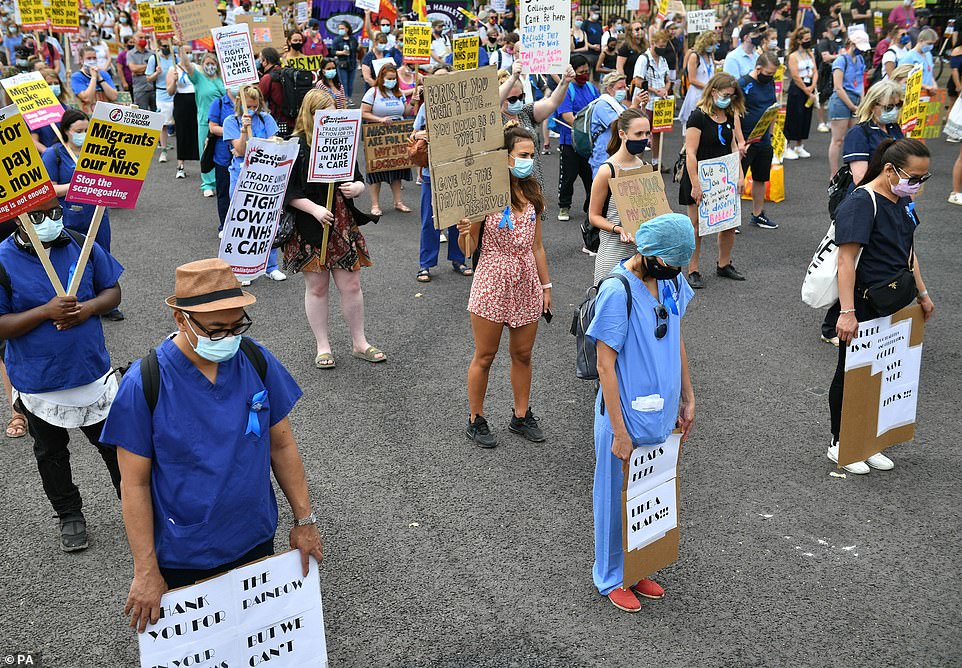 ‘With the average Band 5 NHS worker losing 20% of their pay since 2010 it is no surprise that this has caused over 100,000 vacancies within our NHS.

‘A 15% pay rise is about addressing the conditions which put ourselves and our patients at risk long before COVID-19. NHS workers are understandably angry when their lives are put at risk and the response from this Government is that their work and their lives are not valued.

‘As a group who has been supporting people to independently organise protests to highlight these issues, it is important for demonstration organisers and attendees to keep themselves informed of risks, the latest public health guidance and the latest regulations. These may change rapidly and may differ across the UK.’

The Met has plans in place ahead of this weekend, and people can expect to see officers visible across London.

A spokesman said: ‘We are aware that a number of people may wish to demonstrate this weekend; we would always ask them to engage with us.

‘We want to remind anyone who is taking part in a demonstration in a public place or at a public meeting, not to wear a uniform which is associated with a political purpose, as to do so may be committing an offence under Section 1 of the Public Order Act, 1936.’