NZ suspends quarantine-free travel to and from Sydney

Wellington: Quarantine-free travel from New Zealand to Sydney will be paused following the detection of two new COVID-19 cases in the community.

Flights from New South Wales will be suspended for 48 hours from 11.59pm on Thursday.

COVID-19 Response Minister Chris Hipkins said the government would then lift the restrictions or extend them, depending on how the situation unfolds. 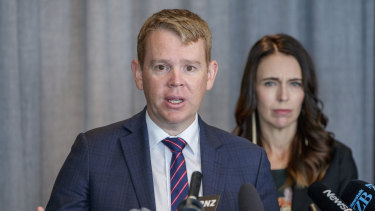 The decision was made following the detection of two community cases in Sydney. The cases have been serologically linked to a case in quarantine, but how they were infected remains unknown.

It was possible there’s a missing link with these cases, Hipkins said.

He acknowledged the flight pause would cause disruptions for travellers, but the possibility of turning the tap off and on was worked into the trans-Tasman bubble arrangement from the start.

Australian officials confirmed the wife of the man who tested positive for the virus on Wednesday had also returned a positive test result.

NSW Health said the man’s case had been linked to an overseas traveller who brought the virus into the country, but officials still don’t know how it spread between the two people.

Restrictions have been announced for the greater Sydney area following the emergence of the virus in the community. From 5pm (Sydney time) no more than 20 visitors are allowed people’s homes, including for weddings.

Mask-wearing at indoor places will be compulsory for the next three days, as well as on public transport and supermarkets.

Hipkins said the NZ government was monitoring the situation across the ditch “very closely”.

He said health officials were in close contact with Australian officials, and further talks were underway on Thursday afternoon.

“We’ll continue to monitor it, and obviously we’ll make decisions where we need to.”

At this stage, flights between New Zealand and Sydney are continuing, with some additional screening measures added for Australian passengers travelling to Aotearoa (New Zealand) prior to boarding, an Air New Zealand spokeswoman said.

Hipkins said if a decision was made to pause any flights, then they could do that reasonably quickly.

“If were to pause, it would take effect probably tomorrow [Friday],” taking into account flight schedules and logistics, he said.

He added that New South Wales had a very good contact tracing system.

The Sydney outbreak is made up of an Indian variant of COVID-19, but not a “variant of concern”, NSW Chief Health Officer Dr Kerry Chant told Australian media on Thursday.