China is facing two major risks that could ignite a fresh coronavirus crisis in the country, according to its National Health Commission.

The authority has urged officials to step up monitoring ‘scattered infections’ and possible ‘regional outbreaks’, triggered by non-native cases and patients with no symptoms.

China today reported no new deaths from the virus for the first time in its daily report since the crisis began last December. 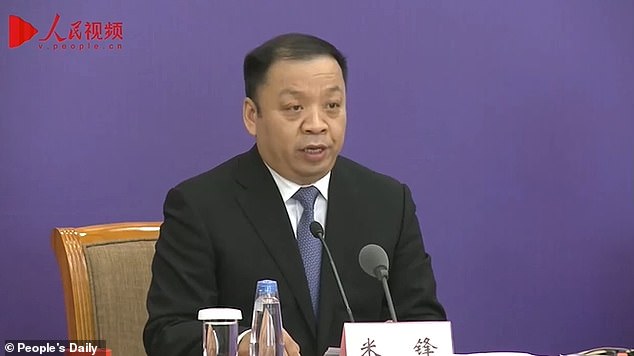 Mi Feng, a spokesperson for the Chinese National Health Commission, has urged the country’s officials to take on ‘arduous tasks’ and prevent a new coronavirus crisis. The screen grab from a video released by state newspaper People’s Daily shows Mr Mi speaking at a press briefing

The number of its local patients who were in critical condition also dropped under 200 for the first time, announced Mi Feng, a spokesperson for the Chinese National Health Commission.

But Mr Mi warned that authorities were still facing ‘arduous tasks’ to prevent the killer bug from sparking a fresh emergency.

He claimed that officials had observed scattered, individual cases continuing to emerge across the country.

His comments come as officials in Wuhan, the former centre of the outbreak, are preparing to lift a 76-day lockdown on the city tomorrow. 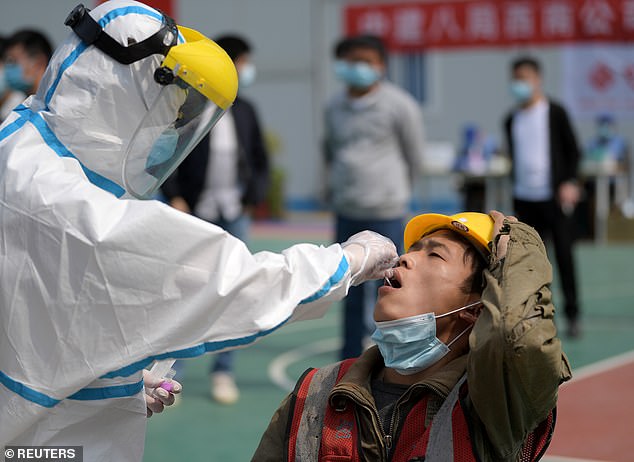 Officials in Wuhan, the former centre of the outbreak, are preparing to lift the travel restrictions imposed on the city after it went into a draconian lockdown on January 23. The picture shows a medic collecting a swab from a worker for nucleic acid test in Wuhan today

In a worrying sign, more than half a million people in central China had to go into a new lockdown last week after three doctors tested positive for the virus despite showing no symptoms.

Imported cases and asymptomatic patients, who show no symptoms but can still pass the virus on, have become China’s chief concern after draconian containment measures succeeded in slashing the overall infection rate.

With the number of new cases dropping to zero in China but soaring abroad, Beijing now views the coronavirus as a ‘foreign’ problem and has increased its efforts to screen new arrivals from abroad. 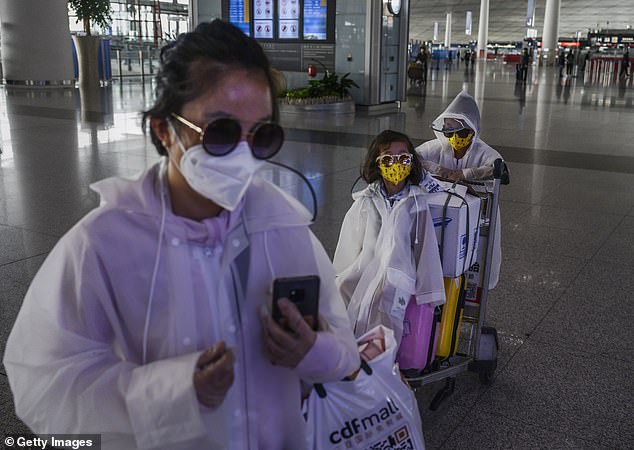 China has stepped up screening people who enter the country from abroad during the coronavirus pandemic. A Chinese family wear protective masks, sunglasses and raincoats are pictured after arriving on a flight at Beijing Capital International Airport on March 24

Major Chinese cities like Beijing and Shanghai, where travellers from overseas land, have set up the so-called ‘medical fortresses’ in their airports to give strict health screening to inbound passengers. All of them must undergo 14-day isolation upon landing.

Chinese National Health Commission reported 32 new cases in its latest daily update, but claimed there were no new fatalities.

Authorities said all the new patients were people returning to China from abroad.

The number of ‘imported cases’ has overtaken that of native cases in China, according to Mr Mi. 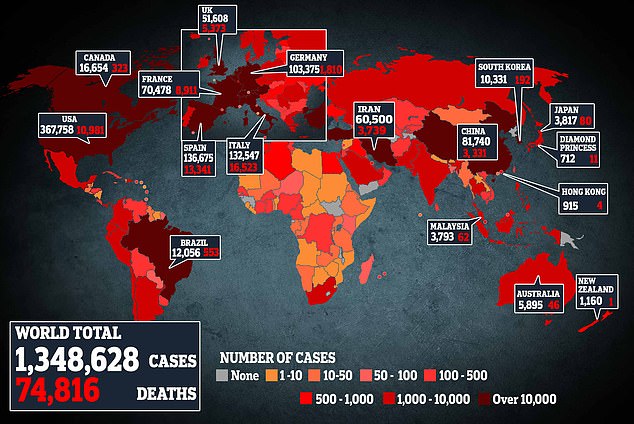 The pandemic has killed more than 74,000 people and infected over 1.3 million worldwide

In total, officials in mainland China have declared 81,740 cases and 3,331 deaths since the outbreak began in Wuhan, a city of around 11 million people in central China.

While 32 people were added to the tally, another 89 were ‘released from hospital after being cured’, a statement said.

Another 12 suspected cases – also all imported – were being kept under observation, along with an additional 30 asymptomatic cases.

At this moment, China has 1,242 confirmed cases in treatment and 1,033 asymptomatic cases under isolation and monitoring.

The pandemic has killed more than 74,000 people and infected over 1.3 million worldwide.