ONE in 55 people in England have Covid-19 with one million falling sick in a week, data has revealed.

Professor Chris Whitty this evening said that cases were starting to flatten in some parts of the UK but that deaths would "continue to increase for some time".

😷 Read our coronavirus live blog for the latest news & updates 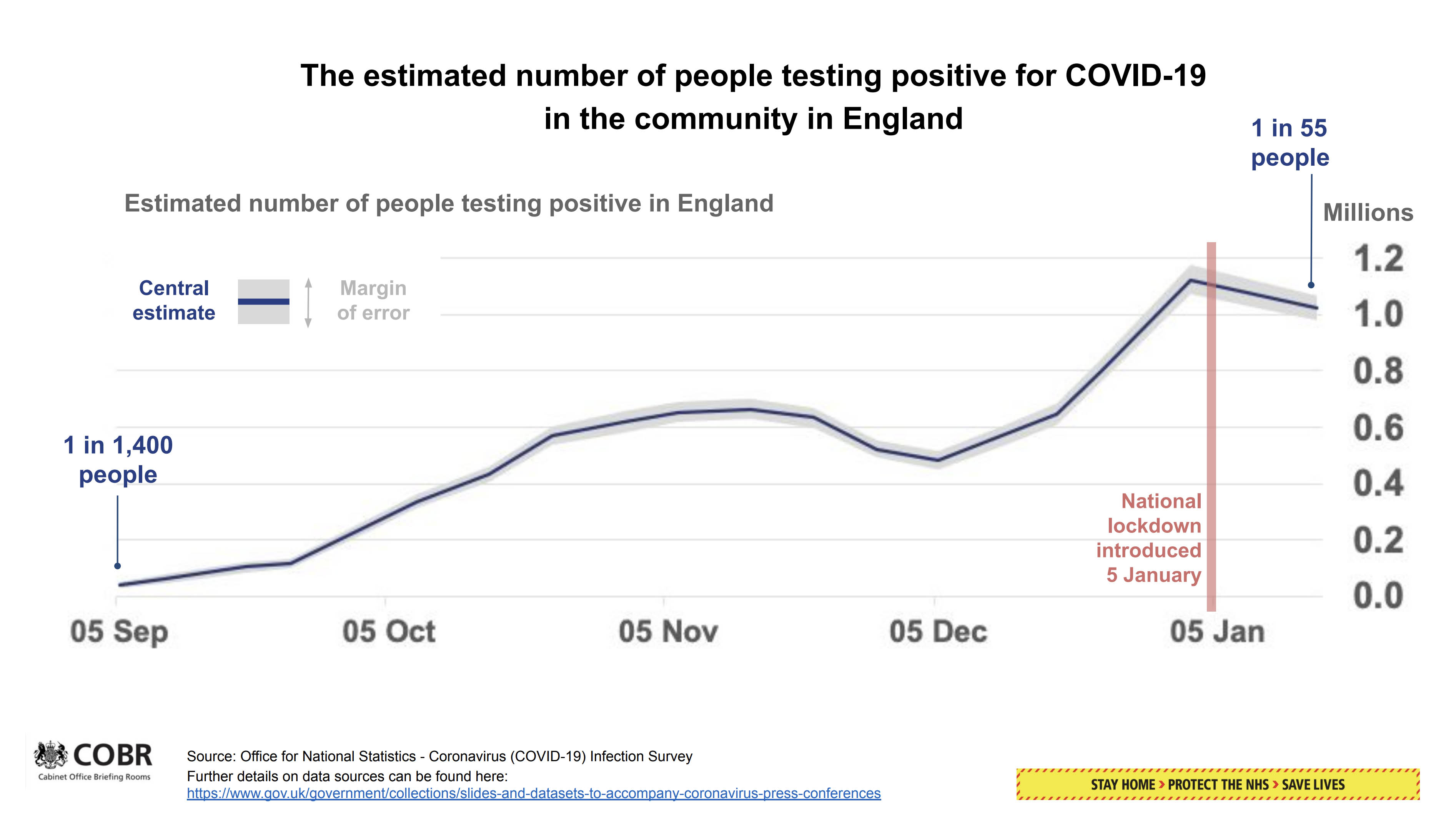 Speaking at a Downing Street press conference this evening Prof Whitty said there were signs that cases had dipped in the South East, East of England and London.

He said there were also signs the number of people in hospital was beginning to flatline in parts of England.

He added: "There has been a turning of the corner on that and the number of people with infections has gone down.

"There are definite signs of improvement but from a very high level".

Prof Whitty said that the number of people dying is steadily increasing.

"This is a very high rate and will take longer to come down and will probably go up over the next week", he added. 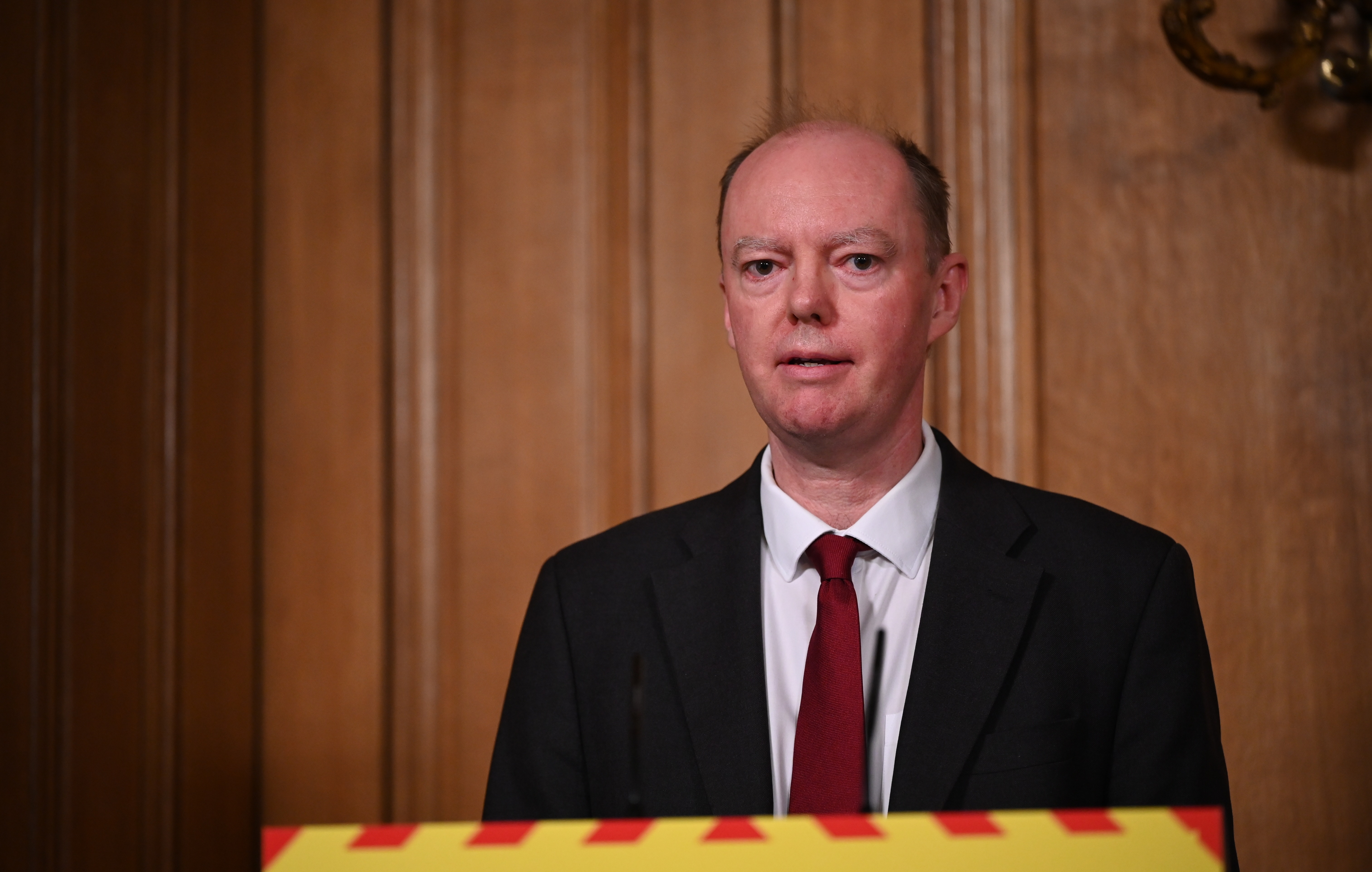 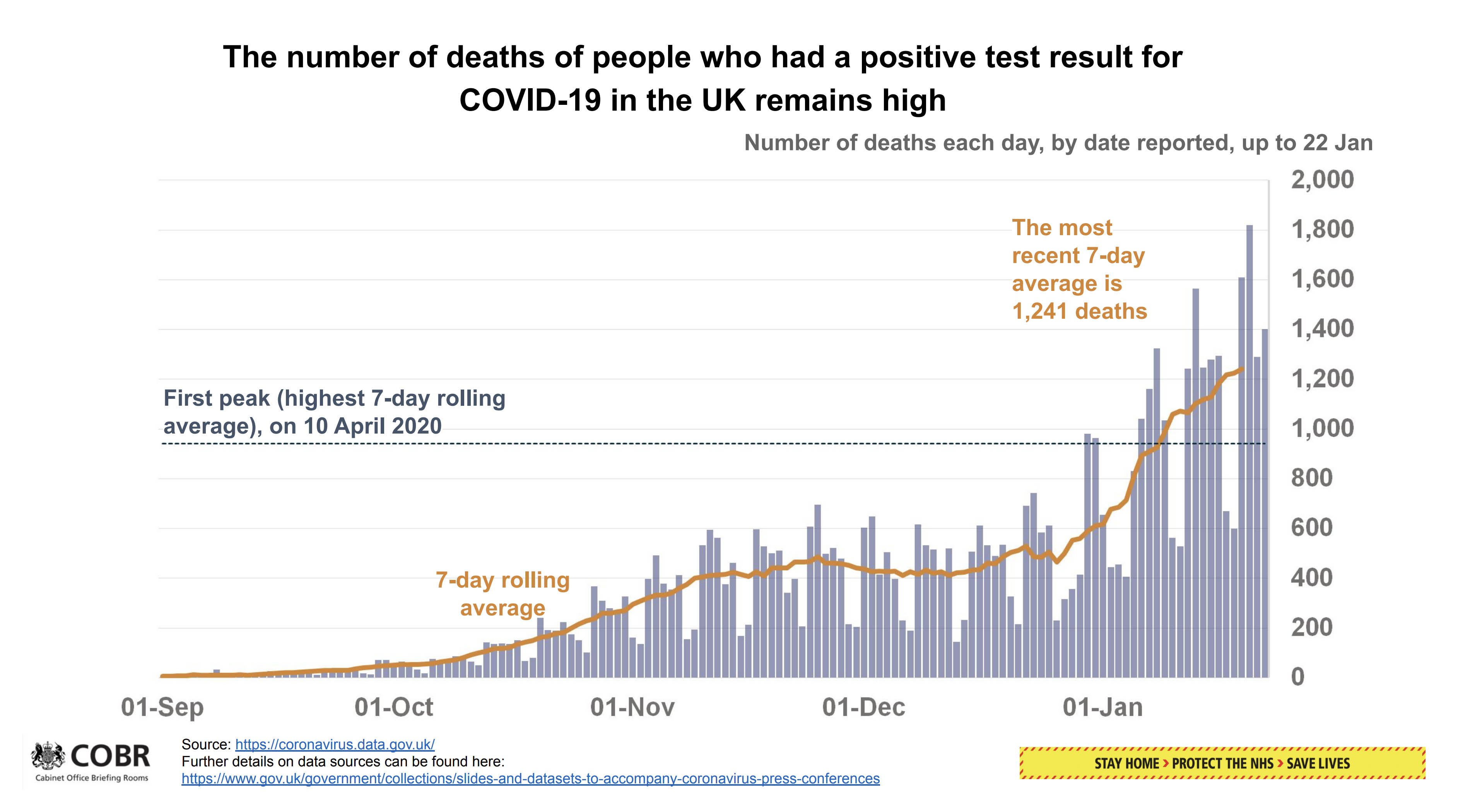 The latest Office for National Statistics report published today found one in 55 people were infected in the week up to January 16.

This is an improvement compared to the Christmas period, where one in 50 had the bug.

And the latest ZOE Covid Symptom Study report shows the number of new infections peaked on January 1 – and has been falling since.

There are now 34,133 daily new symptomatic Covid-19 cases in the UK on average, based on swab tests data from up to five days ago.

Cases appear to have dipped as a result of the national lockdown brought in on January 6.

London remains the Covid hotspot having seen 2.9 per cent of the capital's residents testing positive in the latest data – which does not include hospital or care home cases.

But the percentage of positive cases in secondary school kids has levelled off, and infections from the new variant dropped in London and the South East.

Sarah Crofts, Senior Statistician for the COVID-19 Infection Survey, said:
“In England we have seen a slight decrease in the percentage of people testing positive. 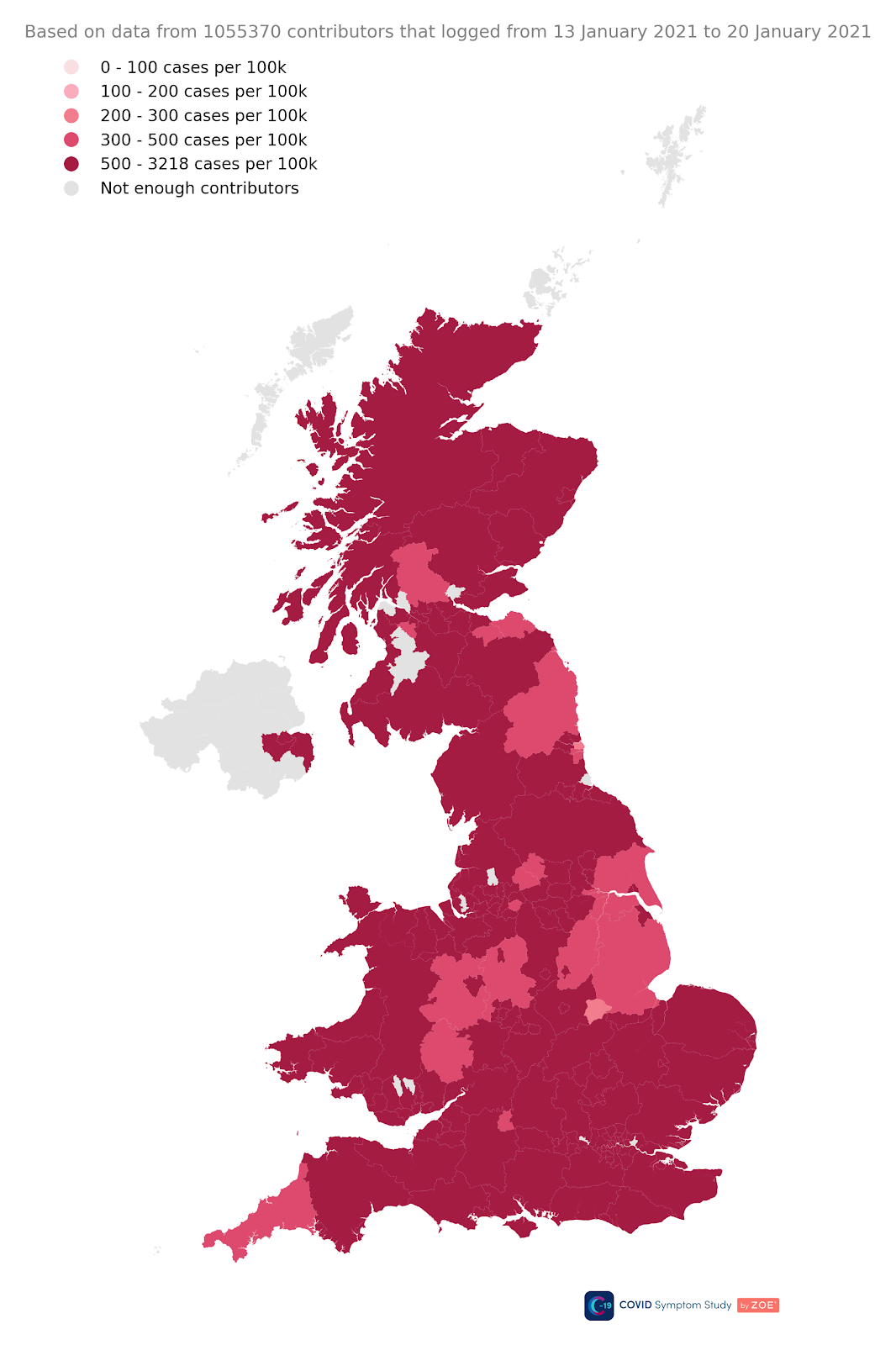 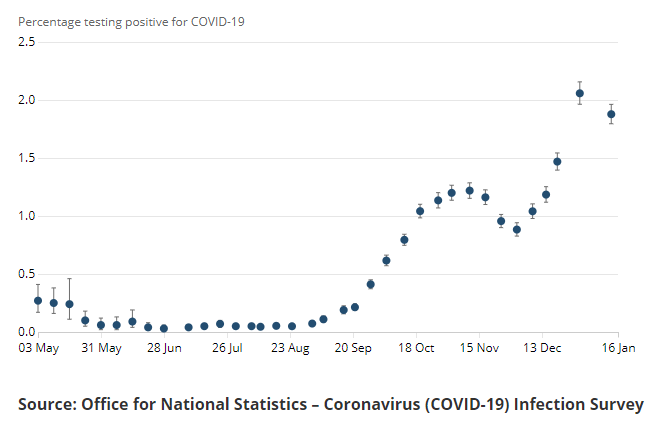 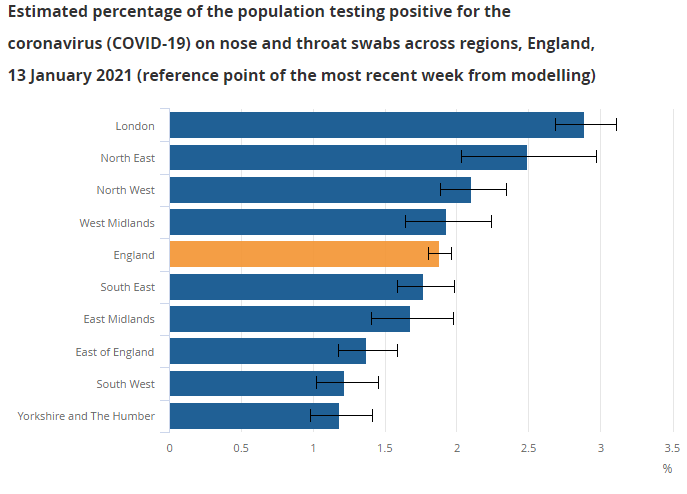 "However, rates remain high and we estimate the level of infection is still over 1 million people.

"The picture across the UK is mixed. In Scotland and Wales rates of infection have levelled off but Northern Ireland has seen an increase in the percentage of people testing positive”

ZOE's data also shows daily new cases are falling in all regions of the UK – although the North West, West Midlands and South West are seeing rates drop at a slower pace.

London, Liverpool City Region, Essex Thurrock and Southend are all the highest risk areas, according to the app report published today.

For the nation as a whole, the R rate – the number of people an infected person will pass Covid onto – is now at 0.8.

It is the first time it has dropped below one for five weeks.

Regionally, the East of England has the lowest R rate between 0.6 and 0.9.

Prof Liam Smeeth, Professor of Clinical Epidemiology, and Dean of the Faculty of Epidemiology and Population Health, London School of Hygiene and Tropical Medicine, said: "Some cautious optimism is warranted."

And Dr Yuliya Kyrychko, Reader in Mathematics at the University of Sussex, said: “It is extremely encouraging to note that the latest estimates of R number have reduced slightly from last week.

“We have to be careful, though, with interpreting this is as a firm evidence of the lockdown being successful, because R number estimates are by their very nature based on lagging data, therefore, they rather represent a situation a week or two ago."

It comes after a separate study called React, from Imperial College London, found the prevalence of coronavirus across England increased by 50 per cent between early December and the second week of January.

Professor Tim Spector, lead scientist on the study and epidemiologist at King’s College London, said: “Cases peaked on January 1 and like confirmed cases, we’ve seen cases continuing to fall with an estimated R of 0.8.

"However, we expect these rapid downward trends will slow down, as we have seen before with this virus.

"Hospital admissions are still high with hospitals full with 23-55 per cent Covid patients across the country. 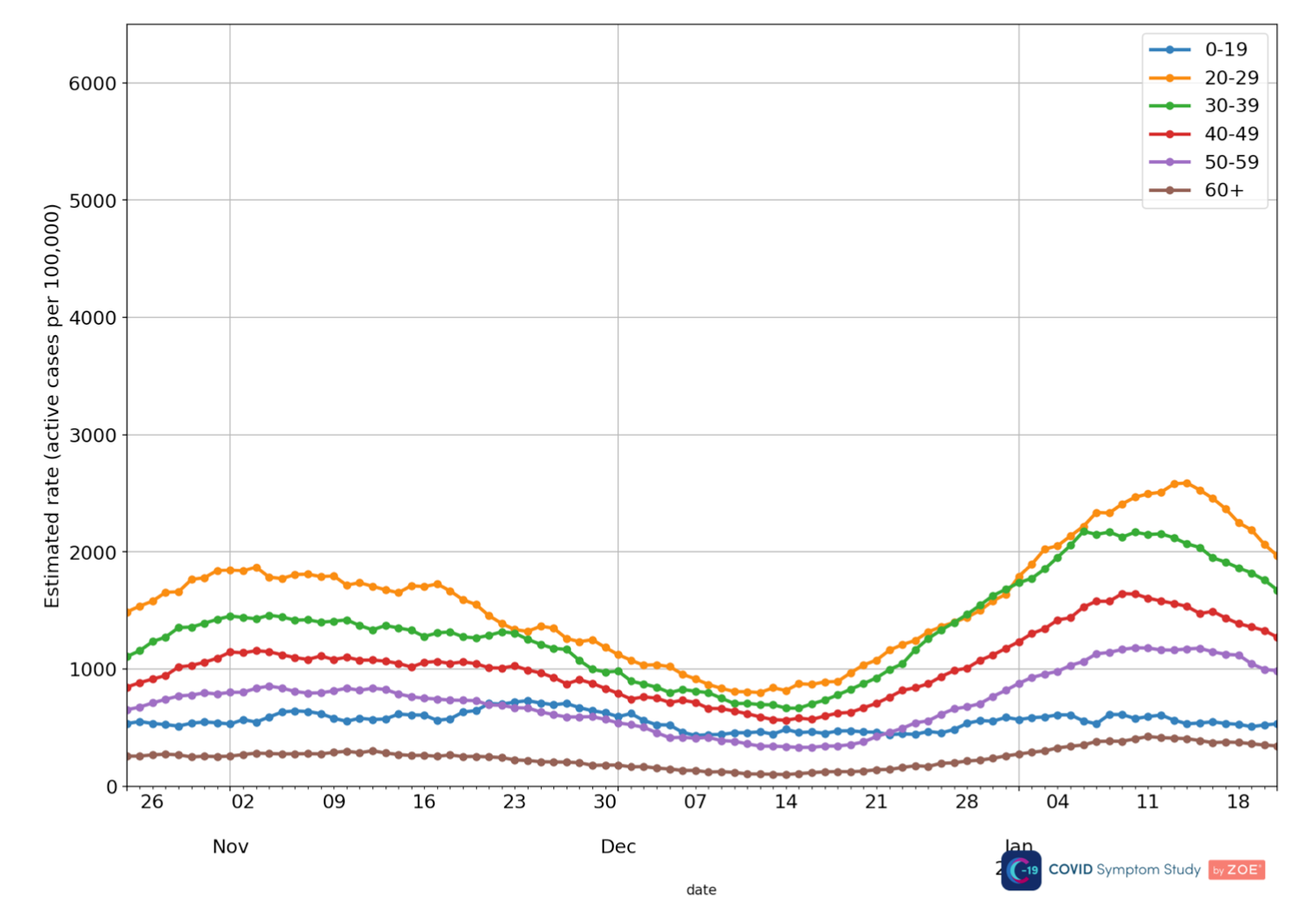 "But admissions have started to flatten, and if the trend continues we expect hospital admissions to fall next week and deaths to start plateauing and falling in the near future.

"Signs are hopeful we’re on our way out of this situation but risk of infection still remains high and we still have a way to go."

The app data is based on around one million weekly reporters and the proportion of newly symptomatic users who have positive swab tests.

These latest survey figures were based on 19,335 recent swab tests done between January 3 and January 17.

It comes as a 1,290 further deaths in the UK were reported on Thursday amid a record-breaking week in Britain's fight against the virus.

Official figures up to January 20 showed 4,973,248 people had received a first dose of a coronavirus vaccine, an increase of 363,508 from the previous day.

Based on the latest figures, an average of 401,070 people a day will need to be vaccinated to meet the target of reaching the 15million highest priority cases by February 15.