One in five adults experienced some form of depression at the start of 2021 – double what was recorded before the coronavirus pandemic.

Data published this morning showed 21 per cent of adults experienced some form of depression in the period between January 27 and March 7 but before the crisis the figure was 10 per cent.

Despite the increase, GP diagnoses for depression tumbled by almost a quarter in 2020, according to the Office for National Statistics.

The ONS said the numbers suggested the pandemic is taking a ‘rising toll on mental health, with many people not necessarily accessing medical help’. 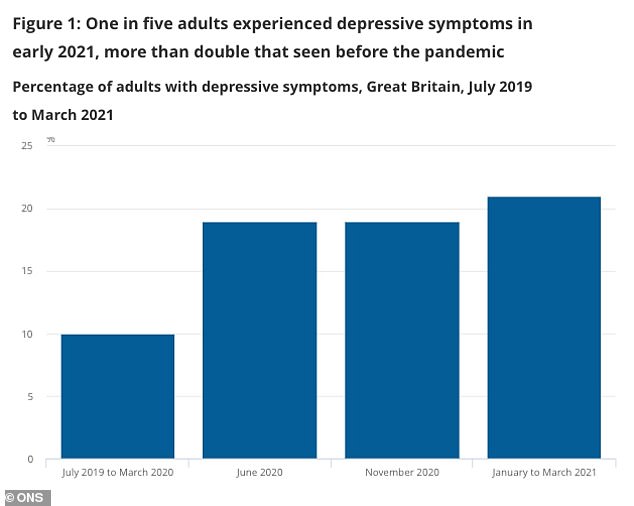 Data published by the Office for National Statistics showed one in five adults experienced depressive symptoms in early 2021, double what was recorded before the Covid-19 pandemic 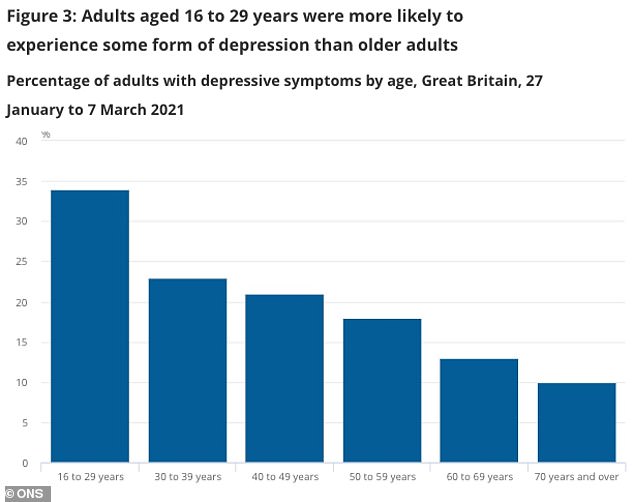 Young adults were more likely to experience some form of depression than older adults, according to the ONS data

The ONS studied trends in GP diagnosed depression among adults in England between March 23 and August 31 last year.

The biggest fall in the number of diagnoses was among the 45 to 54 years age group, with a 30.1 per cent decrease.

Despite the overall fall, depression diagnoses as a percentage of all GP diagnoses actually rose by 1.3 per cent to 15.6 per cent when compared to the same period in 2019.

Theodore Joloza, principal research officer at the ONS, said: ‘While the number of GP-diagnosed cases of adult depression has fallen during the pandemic, these cases make up a larger percentage of overall diagnoses than pre-pandemic.

‘The picture is one of a rising toll on mental health, with many people not necessarily accessing medical help.’

The percentage of adults in Britain experiencing some form of depression in early 2021 – 21 per cent – was up from 19 per cent recorded in November last year.

Rates for adults aged 16 to 39 in early 2021 were more than double what was recorded before the pandemic, 29 per cent compared with 11 per cent.

Ten per cent of people aged 70 and over experienced some form of depression at the start of this year compared with five per cent before the pandemic. 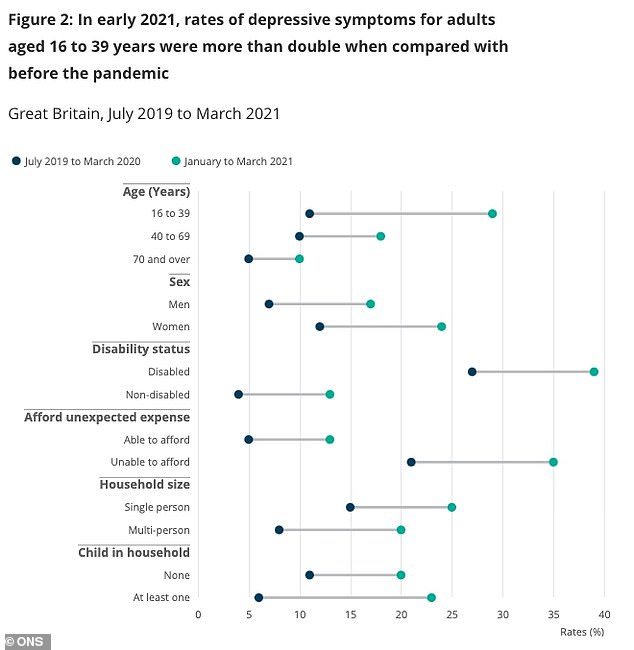 Adults aged 16 to 29 were most likely to experience some form of depression – 34 per cent.

People who rented their home were more likely to have experienced some form of depression than their counterparts who own their home outright, 31 per cent to 13 per cent.

Dr Marianne Trent, a clinical psychologist at Good Thinking Psychological Services, said: ‘That more than a fifth of the adults in this country have been experiencing some form of depression shows the brutal psychological fallout of the pandemic.

‘Once again, young adults, whose jobs were often the first to go as many work in retail or hospitality, have been the hardest hit emotionally.’