One third of whales stranded off Tasmanian coast have died

About one third of a group of 270 whales stranded off Tasmania's west coast have died, with the rescue operation expected to take days.

At a press conference on Tuesday morning, rescuers from the Tasmanian Maritime Conservation Program said they would be focusing on the whales they believed could be saved. 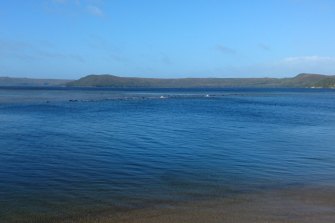 Marine conservation experts were sent to the isolated seaside town of Strahan on Monday following reports of a huge group of whales stranded on the coast.

On Monday, it was believed 25 of the whales had died.

Around 200 whales have been stranded on a sandbar off the Macquarie Heads boat ramp. There is also a group of 30 stranded "several hundred metres away" on another sandbar, and 30 others stranded on Ocean Beach.

Member of the public have been asked to avoid the area.

Related Posts:
World News
Trump rails against Supreme Court for extending ballot deadlines
Bond girl Naomie Harris & Idris Elba speak to Commonwealth youngsters to mark Black History Month for Prince's Trust
Trump ‘CANCELS plan to attend his election night party at his own DC hotel’ as polls put Biden well in front
'Tell my children I love them': Final words of mum killed in Nice terror attack
Thousands flock to Halloween parade in Wuhan, China
Recent Posts
This website uses cookies to improve your user experience and to provide you with advertisements that are relevant to your interests. By continuing to browse the site you are agreeing to our use of cookies.Ok