Parents and children are increasingly feeling the strain of home-schooling during the coronavirus crisis, according to a new official survey.

Data published today by the Office for National Statistics revealed that half of parents (50 per cent) who have personally home-schooled their children said in January that it was negatively affecting their wellbeing.

That figure represents a significant increase on the 28 per cent which was recorded back in April 2020 when the pandemic was in its early stages.

Meanwhile, almost two-thirds of parents (63 per cent) said they believed home-schooling was negatively affecting their children’s wellbeing, compared with 43 per cent last April. 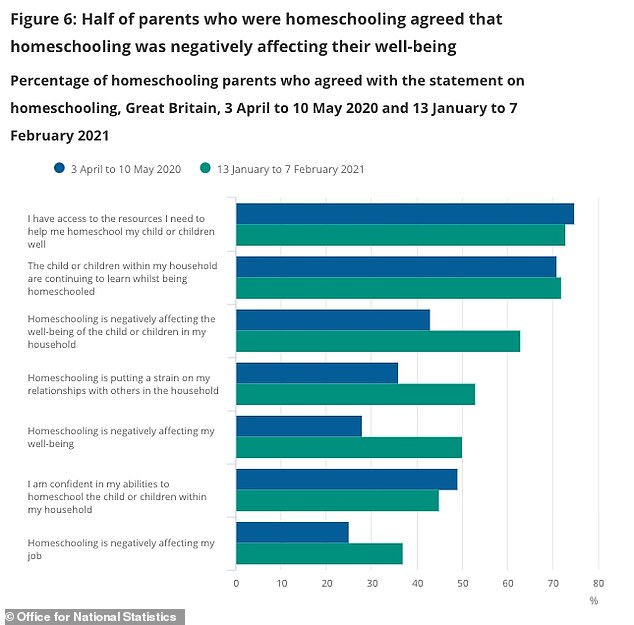 Half of parents who have been home-schooling children said it was negatively affecting their well-being, according to new data published by the Office for National Statistics

The latest numbers, collected between January 13 and February 7, were published just days before Boris Johnson is due to unveil his lockdown exit strategy on Monday.

The Prime Minister has repeatedly said he is aiming to reopen schools across England from March 8.

The ONS survey also asked 16 to 18-year-olds who are in full-time education about their experiences during the pandemic.

Two thirds (65 per cent) agreed they were concerned that their future life plans will be negatively affected by learning at home.

The overwhelming majority of 16 to 18-year-olds in full-time education (93 per cent) said they had accessed real-time interactive online learning.

But some 47 per cent said they had struggled to continue with their education during the pandemic.

The main reason cited by respondents to the survey was a lack of motivation (89 per cent).

A lack of guidance and support was given as a reason for struggling by 41 per cent of respondents. 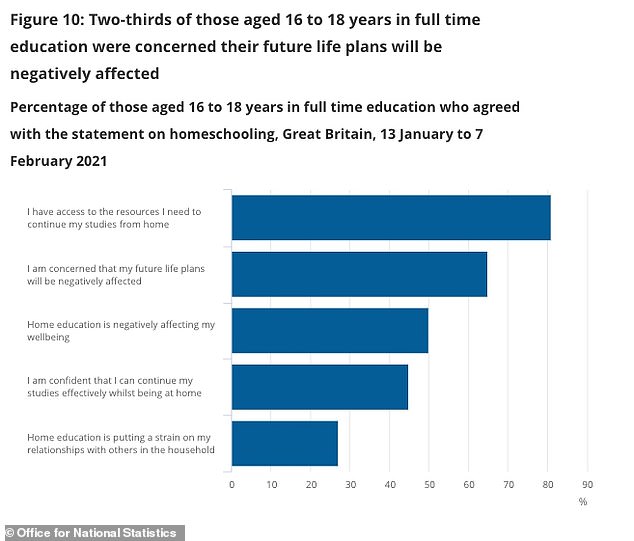 Half of 16 to 18-year-olds in full-time education said that learning at home was negatively affecting their wellbeing.

Hugh Stickland, head of strategy and engagement at the ONS, said: ‘While homeschooling seems to be delivered more effectively now than it was last year, with more resources available from schools, it appears to be taking a greater toll on parents and children.

‘Two thirds of parents say it is having a negative impact on their child’s well being – higher than in April last year.’