Patrick McEnroe and Billie Jean King tell Naomi Osaka, 23, it’s part of her job to speak to the press and without the media ‘no one would know who they are’ – as she doubles down on boycotting journalists to ‘protect her mental health’ 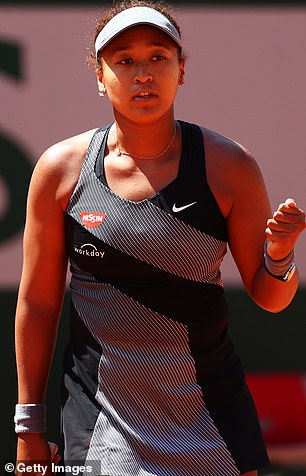 Naomi Osaka, 23, on Sunday at Roland Garros. She refused to take part in the press conference afterwards, saying she didn’t want to ‘subject’ herself to journalists because they ‘doubt’ her and she wanted to protect her mental health

Tennis veterans Patrick McEnroe and Billie Jean King weighed into the row over Naomi Osaka’s decision to boycott the press at the French Open, saying it’s part of her job to speak to the press as the highest paid female athlete ever, even if it makes her uncomfortable.

The row began on Wednesday ahead of the French Open when Osaka, 23, posted on social media that she would not be speaking to the media afterwards playing because she wanted to protect her mental health and not subject herself to ‘people who doubt her’.

‘I’m not going to do any press during Roland Garros. I’ve often felt that people have no regard for athletes’ mental health and this rings very true whenever I see a press conference or partake in one. We’re sat there and asked questions that we’ve been asked multiple times before or asked questions that bring doubt into our minds and I’m just not going to subject myself to people that doubt me.

‘I believe the whole situation is kicking a person while they’re down and I don’t understand the reasoning behind it.

‘If organizations think they can just keep saying “do press or you’re gonna be fired” and continue to ignore the mental health of the athletes… then I just gotta laugh,’ she said.

She was fined $15,000 – which she says she is donating to a mental health charity – and was given a stern warning by all four Grand Slam tournaments that she could face expulsion if she continued to dodge the press.

Osaka doubled down on her decision on Sunday, tweeting: ‘Anger is a lack of understanding. change makes people uncomfortable.’

Her coach sent a different message in an interview with Der Spiegel.

‘In the USA, the issue of athletes wanting more freedom in their dealings with the press is very topical right now. They simply don’t want to be threatened with punishments if they don’t feel well for a day. Naomi knows that it’s important to talk to the press.

‘She doesn’t want to change things for herself alone. It’s a matter of principle for her: she wants to bring about change here, too,’ Fissette – Wim Fissette – told Der Spiegel.

Her decision has divided opinion among tennis greats who say that while they praise her for drawing attention to mental health, it’s part of her job to speak to the media, no matter how uncomfortable it makes her.

Osaka was paid $37.4 million 2019, the highest amount a female athlete has ever earned in a single year. 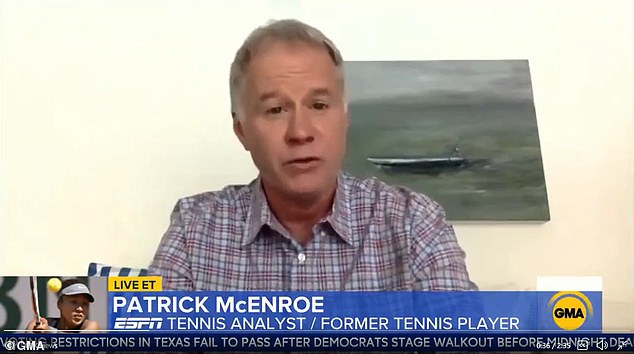 Patrick McEnroe, who won the 1989 French Open doubles, said Naomi still has to abide by certain rules even though it’s important to discuss mental health 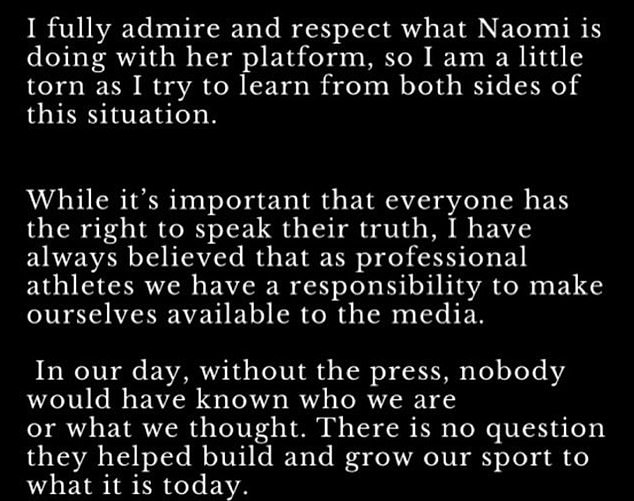 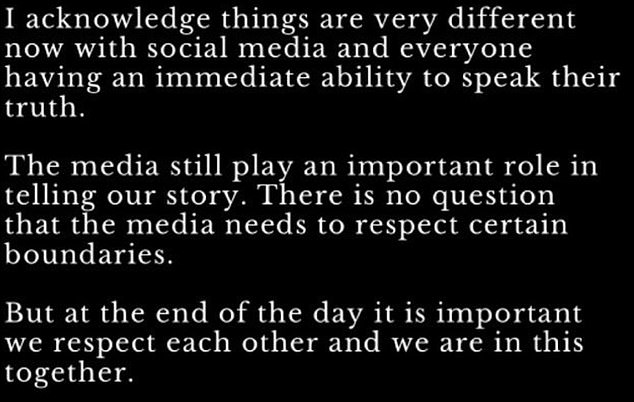 Billie Jean King, a tennis great who won 39 Grand Slams, tweeted this statement over the weekend saying the media still has an ‘important role’ in the sport

On Monday morning, Patrick McEnroe, who won doubles at the French Open in 1989, told Good Morning America that while he gave Osaka ‘a lot of credit’ for highlighting the issue of mental health, she ought to have worked with the tournament rather than refuse to show up to the press conference.

‘Quite frankly I was surprised initially to see her take this stance although she has been at the forefront of other very important issues – the Black Lives Matter issues last summer.

‘She is using her platform to bring awareness to certain issues, very important ones – mental health is an incredibly important topic. I think there may have been a few missteps along the way from Naomi and her team, at looking at how this was going to play out.

‘The federation has reached out to her, she apparently didn’t respond which is why they released this statement which I felt was a little bit heavy handed in sort of threatening her with disqualification. I didn’t like that at all I think the conversation needs to happen, there’s been a lot of other athletes who have dealt with this so I give Naomi an awful lot of credit for bringing this attention.

‘She is a professional tennis player she is an athlete so you have to abide by certain rules, one of which is speaking to the press on a regular basis. Now maybe that could be, we could work with her the powers at be – they’d like to have that discussion.

‘She is the highest paid female athlete on the planet. She has a huge platform, and a great player but I thought that was too much, going too far threatening her. The statement up until that was fine, they reached out to her about mental health awareness, they said is there any way we can work with this out maybe come to some compromise in the short term but in the long term, you can’t have players just deciding to do whatever they want to do.

Osaka, 23, is doubling down on her decision despite criticism from fellow athletes. She tweeted this on Sunday 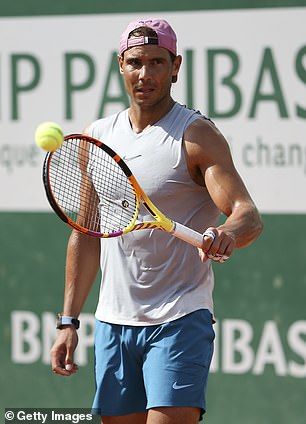 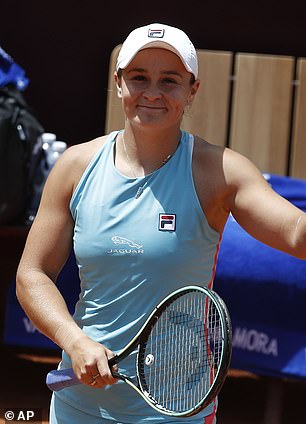 Rafael Nadal and Ashleigh Barty both said that they have no issue speaking with the media, and they acknowledged that without the media their careers would not look the same

‘Once you become a professional athlete, you decide to play by certain rules of the game,’ he said.

Billie Jean King tweeted on Sunday that she was ‘torn’ over the issue too.

‘I fully admire and respect what Naomi is doing with her platform, so I am a little torn as I try to learn from both sides of the situation.

‘While it’s important that everyone has the right to speak their truth, I have always believed that as professional athletes we have a responsibility to make ourselves available to the media.

‘In our day, without the press, nobody would have known who we are or what we thought. There is no question they helped build and grow our sport to what it is today.’

‘I acknowledge things are very different now with social media and everyone having an immediate ability to speak their truth.

‘The media still play an important role in telling our story. There is no question that the media needs to respect certain boundaries.

‘But at the end of the day, it is important that we respect each other and we are in this together.’

Kin, 77, is considered one of the greatest tennis players of all time, having won 39 Grand Slams throughout her career.

Fox Sports Radio host Rob Parker who said the French Open should have told Osaka not to show up for the tournament if she could not face answering questions.

Rafael Nadal made similar comments in the pre-tournament press day.

‘I respect her, of course, as an athlete and her personality. I respect her decision. I don’t know. I mean, we as sports people, I mean, we need to be ready to accept the questions and to try to produce an answer, no?

‘I understand her, but on the other hand, for me, I mean, without the press, without the people who normally travel, who are writing the news and achievements that we are having around the world, we probably will not be the athletes that we are today.

‘We [wouldn’t] have the recognition that we have around the world, and we will not be that popular, no?’

World Number 1 Ashley Barty said: ‘We know what we sign up for as professional tennis players. I can’t really comment on what Naomi is feeling or her decisions she makes.

‘At times press conferences are hard, of course, but it’s also not something that bothers me. I’ve never had problems answering questions or being completely honest with you guys. It’s not something that’s ever fazed me too much.’

Naomi’s sister, Mari, has back-tracked on a Reddit post after critics said it sounded as though Naomi was using the subject of mental health as leverage to get journalists to stop asking her tough questions.

She had tried to explain her sister’s decision by saying she was upset that whenever she takes part in press conferences, she is reminded that her clay record isn’t strong.