Plans for SpaceX-style rocket launch centre in Shetland is blocked

Scotland’s plans for a space station have been blocked by the nation’s historic environment watchdog after the Shetland site was deemed of ‘cultural significance’.

The proposed development of a Shetland Space Centre, which is being backed by Scotland’s richest man Anders Holch Povlsen, was rejected due to the site having once been a Second World War radar station.

Developers were denied scheduled monument consent to build on the former RAF radar station site in the village of Skaw, on the island of Unst in the Shetlands, by Historic Environment Scotland (HES), which described the site as a ‘remarkably well preserved and intact military complex which dates from the early 1940s’.

Shetland Space Centre chief executive Frank Strang vowed to ‘vigorously contest’ the environment watchdog’s decision and told The Herald he was ‘greatly surprised’ as HES had ‘done nothing to preserve the site for the last 50 years’.

Danish ASOS billionaire Anders Holch Povlsen, who is the largest landowner in Scotland, has invested £1.43m into the spaceport via Wild Ventures Ltd – the sister company of Wildland Ltd, which runs Povlsen’s estates.

The Shetland Space Centre has already been approved by the UK Space Agency to become part of the UK’s spaceflight programme, with Lockheed Martin planning to move its UK Pathfinder Launch to the island using a £23.5m grant. 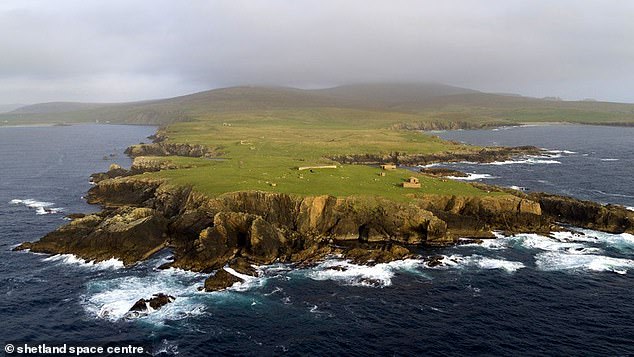 Located in the village of Skaw, on the island of Unst in the Shetlands, the radar station was denied scheduled monument consent by Historic Environment Scotland 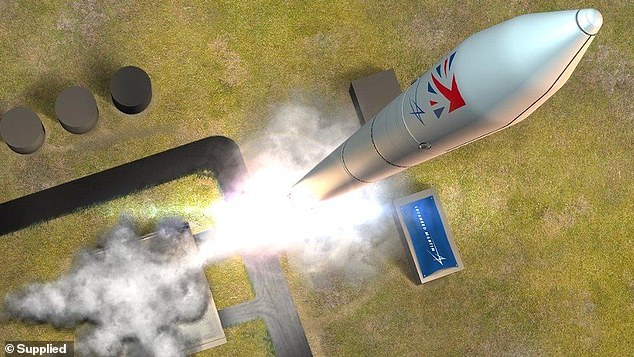 Lockheed Martin planned to move its UK Pathfinder Launch to the island using a £23.5m grant

According to Lockheed Martin the first satellite launched from the UK will be used to collect data from space that will ‘help drive growth across the country’.

The application contains a proposal for a launch site on the Lamba Ness peninsula on Unst, with various site buildings.

Around 140 jobs would be created at the launch site and a further 70 throughout Scotland if given the go ahead, bringing £7.8million gross value per year to the nation’s economy, The Herald reports.

In its decision HES said it had noted the ‘profitable benefits’ of the site but said there was ‘no compelling case’ for it to be built on the culturally significant location. 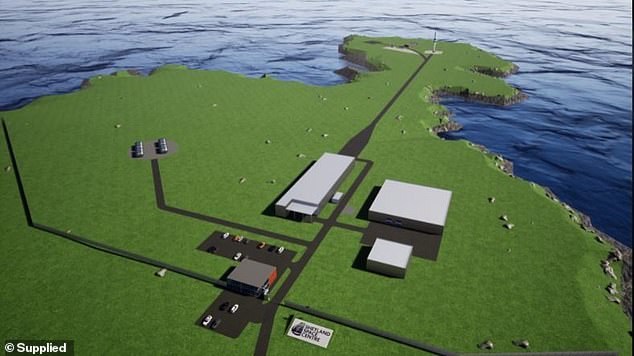 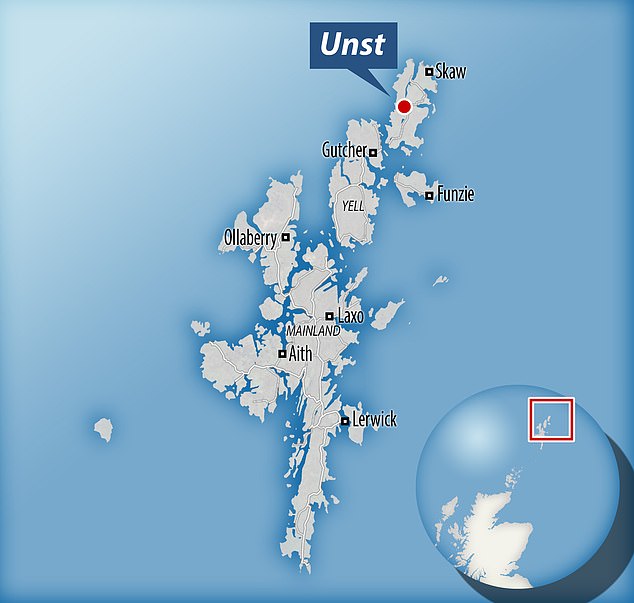 The application contains a proposal for a launch site on the Lamba Ness peninsula on Unst, with various site buildings. Unst is the most northerly island of the Shetlands 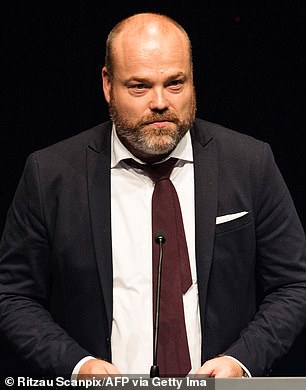 During World War II the site functioned as the UK’s most northern surveillance point, warning the British military of any incoming aircraft on its radar.

As Germany invaded Norway in 1940 the lookout became an invaluable part of the UK’s defence.

HES said in its decision: ‘The monument is of national importance because it has an inherent potential to make a significant addition to our understanding of the past, in particular the advance of radar technology and the development of an early warning system protecting the sea and airspace around the United Kingdom.

‘It survives in good condition as a complete example of the technical, support and domestic buildings and structures necessary to provide an early warning reporting function.

‘The loss of the monument would significantly diminish our future ability to appreciate and understand the scale of the efforts employed on the home front in the defence of Britain.’ 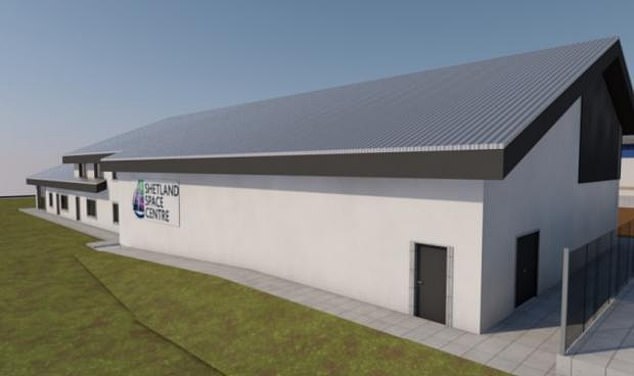 A proposed mock-up of the proposed Shetland Space Centre, which would have a number of site buildings as well as an aircraft hangar 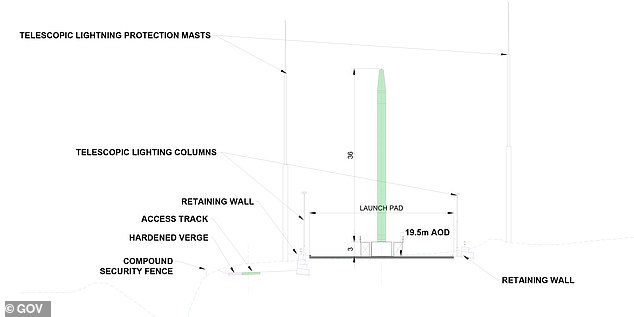 Shetland Space Centre has the right to appeal the decision.

The plans for a privately funded spaceport have been likened to that of SpaceX , Elon Musk’s manufacturer of rockets and spacecraft which has four launch sites across the United States – in Texas, Florida and California.

Mr Strang told The Herald: ‘But be in no doubt: we will vigorously contest HES’s refusal of permission to develop and enhance a site which, while evidently of national significance, has for years been left in a dilapidated state.’

He added that the proposal for the space station also included plans to restore the road leading into the site where ‘old RAF concrete buildings’ currently stand. He said he believed it was a positive to ‘meld the old with the new’.

Anders Holch Povlsen is the fabulously wealthy owner of the international fashion business Bestseller and the biggest shareholder in the British online fashion company ASOS, who bought Topshop in a cut-price £330million deal today.

The humble Danish retail mogul, 48, worth £6.1billion but known for liking a whisky down the pub and driving a bashed up VW Golf, is Scotland’s richest man with around 220,000 acres of the Highlands under his control after he started buying up some of the country’s grandest estates 14 years ago. As a result, the reclusive Dane has become Britain’s biggest private landowner, making Prince Charles, who owns a paltry 130,000 acres in the UK, look like a veritable pauper.

Povlsen became enchanted with Scotland when one summer in the 1980s the young boy from Denmark went fly fishing in the Scottish Highlands with his parents and brother.

Some have called it the most expensive family holiday in history because three decades later he has spent £100million quietly turning himself into a real-life Monarch of the Glen.

With his wife Anne, 43, they have formed a ‘200-year vision’ for their estates, which involves rewilding the land. In the vision, Povlsen said he planned to pass the estate along to his four children and that they would continue his work.

But their dream was hit by tragedy when three of their four children were killed in the Easter Sunday bombings in Sri Lanka in 2018. Alfred, Alma and Agnes all died. Only their youngest daughter, Astrid, then ten, survived the attacks and the couple said that they remain ‘genuinely grateful’ that she is still alive.