Podesta: Quad will demand Australia does more on climate change

London: Senior Democrat John Podesta has warned Australia will be confronted by its fellow Quad members over its weak carbon reduction targets as the Biden Administration places climate change at the heart of its security agenda. 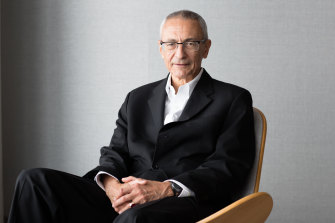 “The Biden Administration is going to expect a lot more than they got at the summit out of the government,” Podesta said. “Everybody’s moving and Australia is left behind and at the end of the day that’s going to have important consequences.”

Morrison is sticking to the Coalition’s goal of cutting Australia’s emissions by 26-28 per cent by 2030 and is resisting pressure to state a goal for the middle of the century. He told Biden’s virtual leaders summit last week that Australia was “on a pathway to net-zero” with a goal to “get there as soon as possible” through technology rather than carbon taxes.

Morrison has been criticised by Labor, which backs a net-zero target by 2050, but has not yet indicated its 2030 emissions and has no plans to revive a carbon price policy in the future.

Biden has praised Morrison’s technology-led approach in personal calls with the prime minister and has ever publicly rebuked Australia’s targets, although officials in his administration briefed The Age and The Sydney Morning Herald before the summit, saying that following the existing Australian trajectory was insuffient and a shift would be needed.

Australia’s major trading partners including the UK, USA, European Union, Japan and Canada have set targets for around 50 per cent emissions reduction by 2030, and have already committed to net-zero 2050 deadlines. 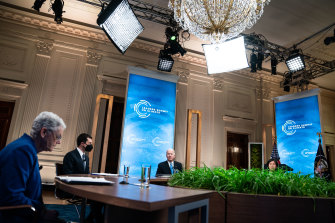 US President Joe Biden, centre, speaks during the virtual Leaders Summit on Climate in the East Room of the White House in Washington, DC. Credit:Bloomberg

While the focus of the reprised Quad, comprising India, the US, Australia and Japan, is currently focussed on dealing with China’s rising aggression in the region, Podesta said it would soon address climate change.

“Right now [Australia] can take some solace from the fact that the architecture around trying to compete [with] and confront China has taken precedence in the Quad but at some point, even in the Quad, India, Japan, and the US are going to turn to Australia and say ‘we’ve got to deal with this issue too,’” he said.

However, like Morrison, India’s Prime Minister Narendra Modi did not pledge any new goals for slashing India’s carbon output – the developing giant is the world’s third-largest emitter.

The informal Quad grouping was created in 2007 at the suggestion of Japan’s then-prime minister Shinzo Abe but was abandoned by Australia by former prime minister Kevin Rudd.

As a result of its revival, the four leaders held their first-ever virtual summit in March when they identified climate change as a “priority,” establishing a Quad Climate Working Group