Policemen in South Africa have been caught looting goods as the ransacking of stores and warehouses continued into a fifth day – with huge queues forming outside supermarkets amid fears of food shortages caused by the rioting.

Footage showed people accosting a man wearing a police jacket beside a hatchback filled with household supplies, including bread, milk and cooking oil. The woman filming says: ‘This is a police officer, in uniform, looting … This is our SAPS (South African Police Service), guys.’

A second video from the same woman showed another purported officer in plain clothes trying to hide his face from the camera after he was hauled out of his car by locals. His vehicle was laden with allegedly looted products, including a flat-screen television.

‘He has looted, he has threatened our lives with firearms, and this is all coming out of his Polo,’ the woman says as she films objects on the ground beside the open car boot.

The raging unrest first erupted last Friday after former president Jacob Zuma started serving a 15-month term for contempt, having snubbed a probe into the corruption that stained his nine years in power.

But the wanton lawlessness has lost any political motivation, with gang shoot-outs in the streets, people queuing up in their cars to loot warehouses and malls, and white farmers forming militias to defend their properties.

Law-abiding citizens were pictured this morning lining up outside a supermarket in Hillcrest in KwaZulu-Natal, trying to stock up amid fears of food shortages caused by the pillaging.

But these numbers are dwarfed by the more than 70,000 troops deployed to enforce last year’s coronavirus lockdown, and only a handful of soldiers were seen at some shopping centres.

Last year, the country’s GDP slumped by 7 per cent – the largest decline in more than 40 years. The unemployment rate stands at 32.6 per cent, while youth unemployment has soared to a staggering 75 per cent. 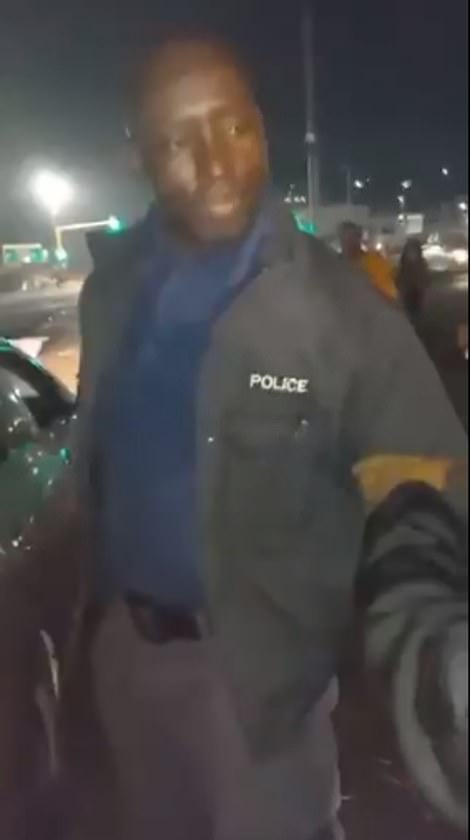 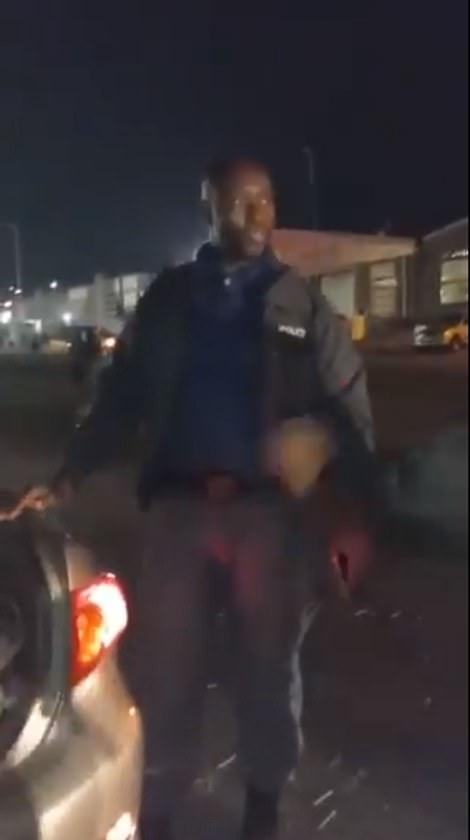 Footage showed people accosting a man wearing a police jacket beside a hatchback filled with household supplies, including bread, milk and cooking oil 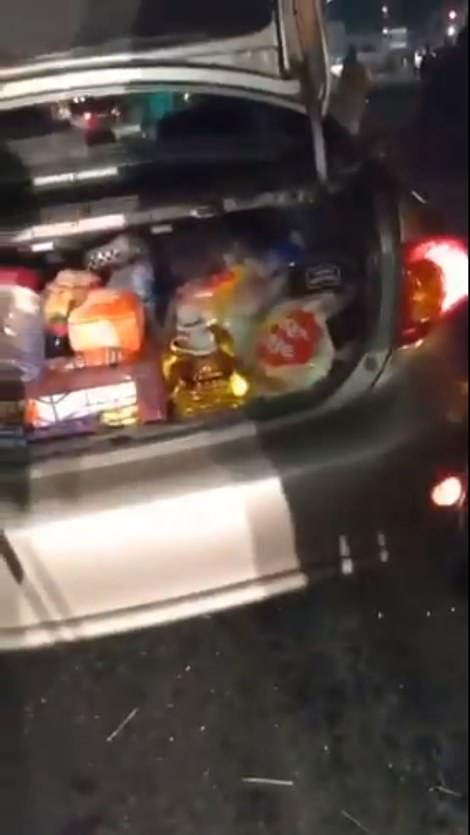 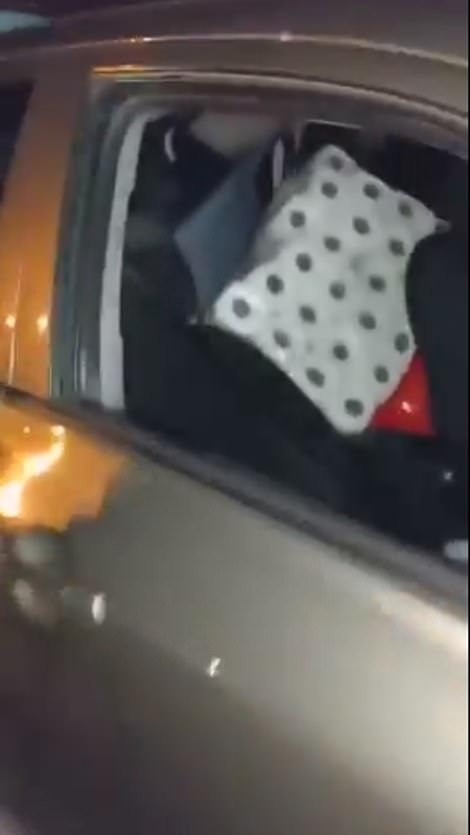 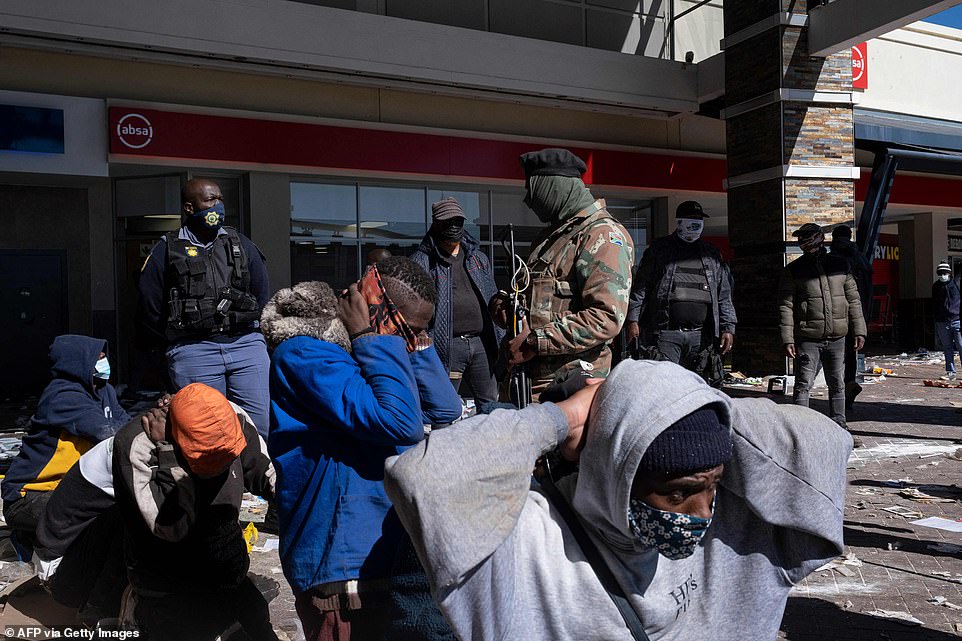 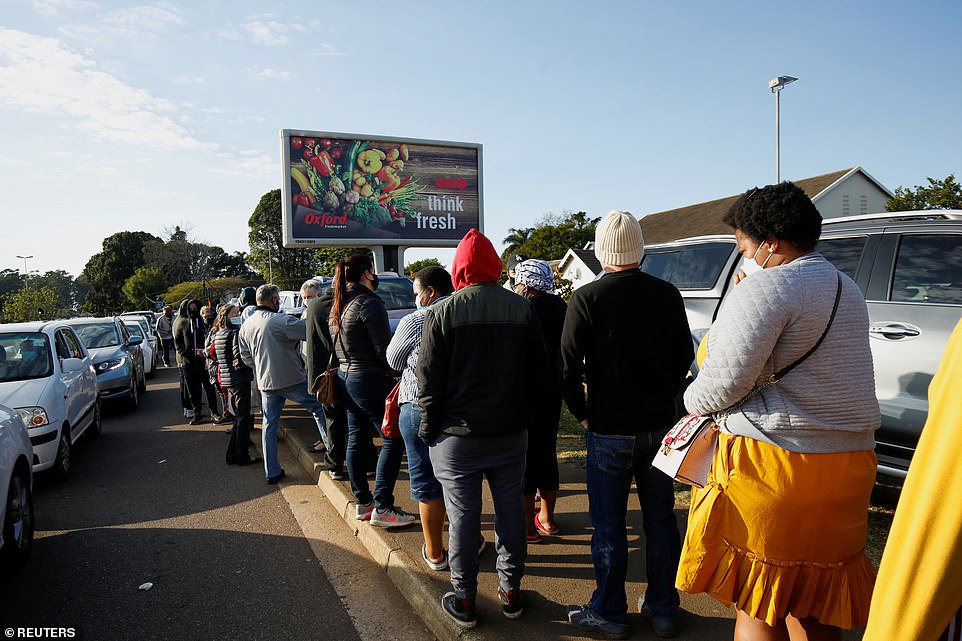 Residents queue at a supermarket which has been closed after violence erupted in the Hillcrest, in the KwaZulu-Natal province 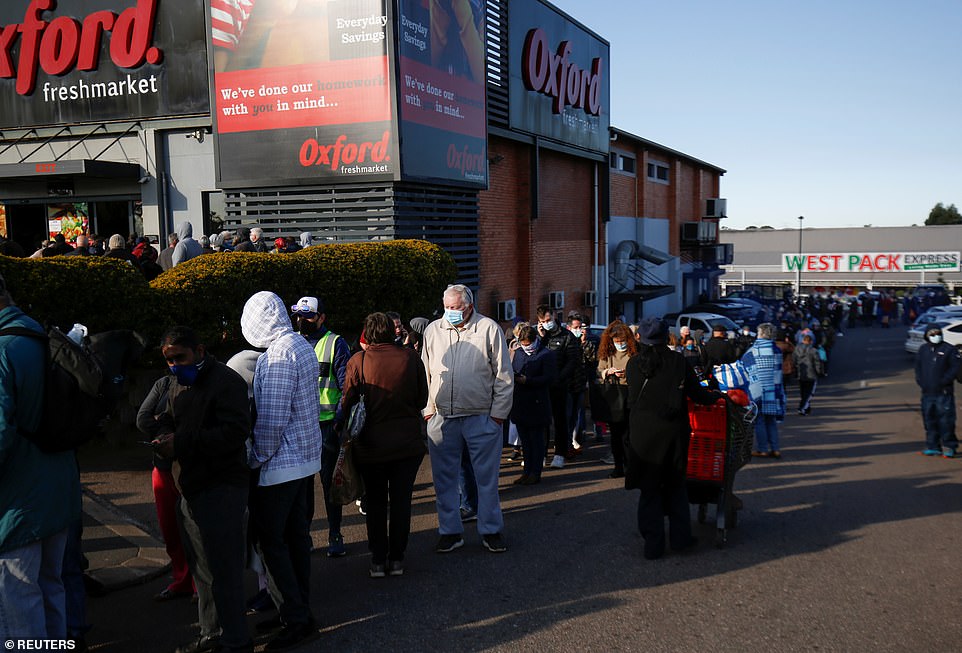 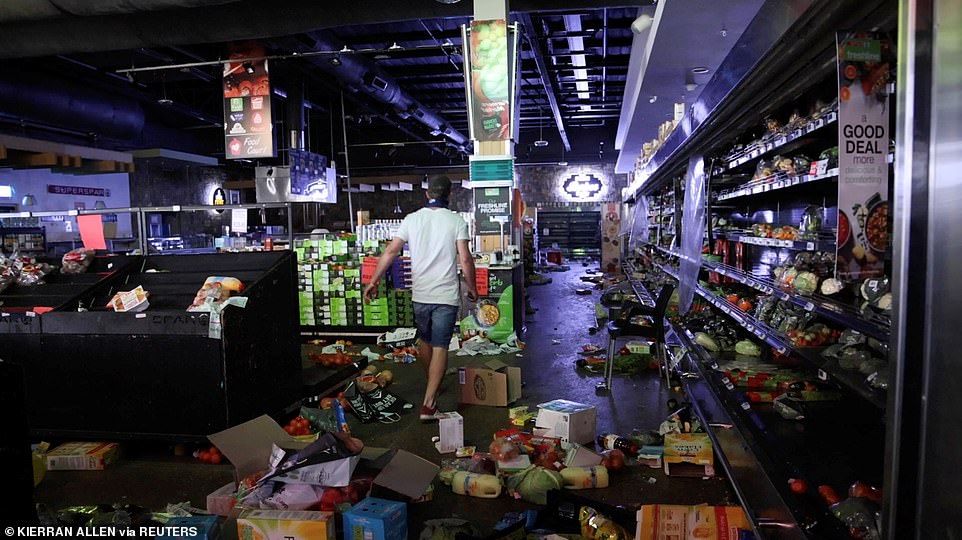 A self-armed local looks for looters inside a supermarket following protests that have widened into looting, in Durban, on Tuesday 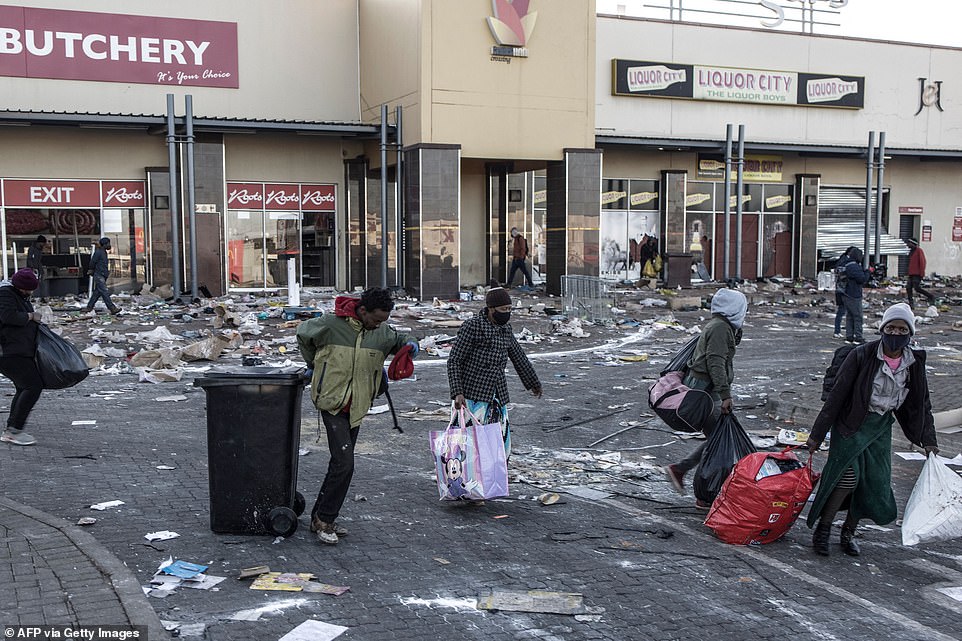 Looters pull few items they took from what was left to grab in a vandalised mall in Vosloorus, on Wednesday 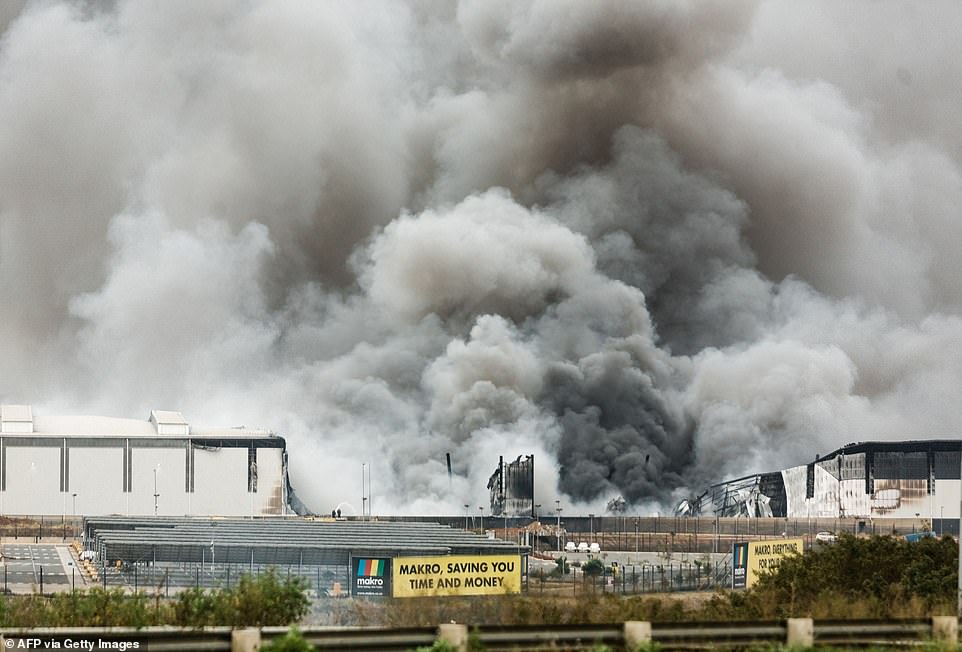 Smoke rises from a Makro building set on fire overnight in Umhlanga, north of Durban, on Tuesday 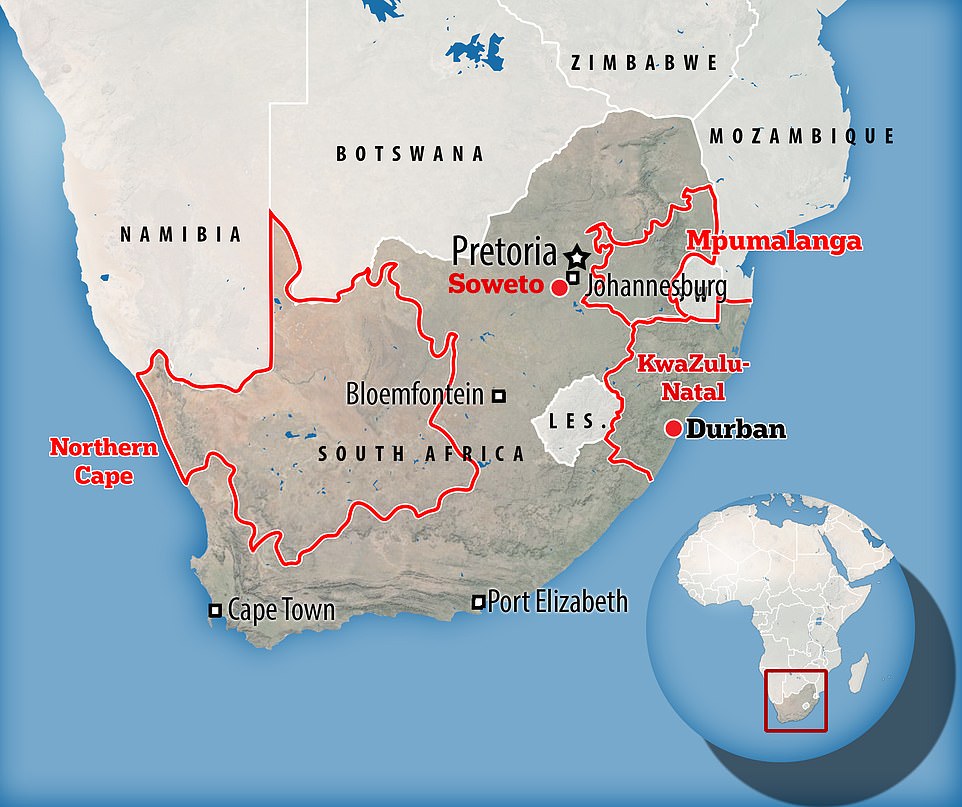 ‘The total number of people who have lost their lives since the beginning of these protests … has risen to 72,’ the police said in a statement late Tuesday.

Most of the deaths ‘relate to stampedes that occurred during incidents of looting of shops’, it said.

Others were linked to shootings and explosions of bank ATMs.

The number of arrests has risen to 1,234, although many thousands have been involved in the ransacking sprees.

Earlier TV footage showed dozens of women, some wearing their dressing gowns, men and even children strolling into a butcher in Soweto, coming out balancing heavy boxes of frozen meat on their heads or shoulders.

In Alexandra township north of Johannesburg, hundreds of people streamed in and out of a shopping mall, freely grabbing groceries.

Looters who spoke to AFP said they had got caught up in the rush, or saw the chance to ease a life blighted by poverty.

‘I’m really not concerned about Zuma. He is a corrupt old man that deserves to be in jail,’ said a 30-year-old man who works at a car wash.

He admitted to ‘taking things from the shop for my mum’ – stainless-steel pots, meat and groceries.

In Pietermaritzburg, KwaZulu-Natal’s capital, people hauled boxed refrigerators through bushes to a long line of cars that were parked along a highway. 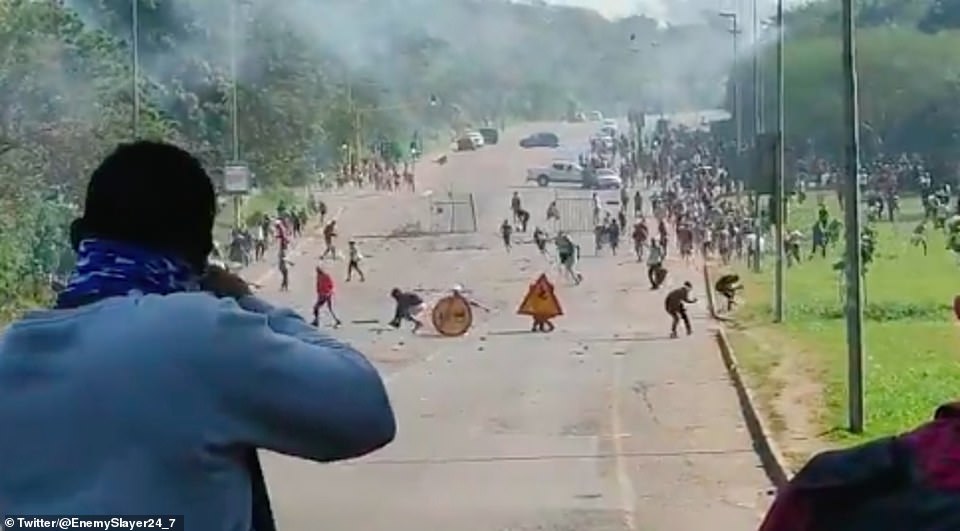 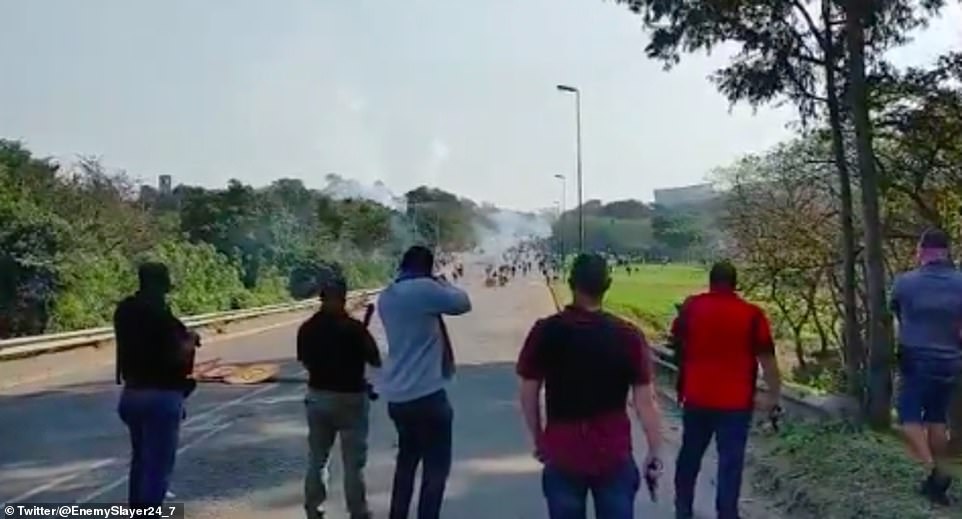 In the clip, a line of shop and property owners fired on the rioters from afar before running closer and continuing to shoot, while the crowds protected themselves behind road signs and ran off the road amid the chaos 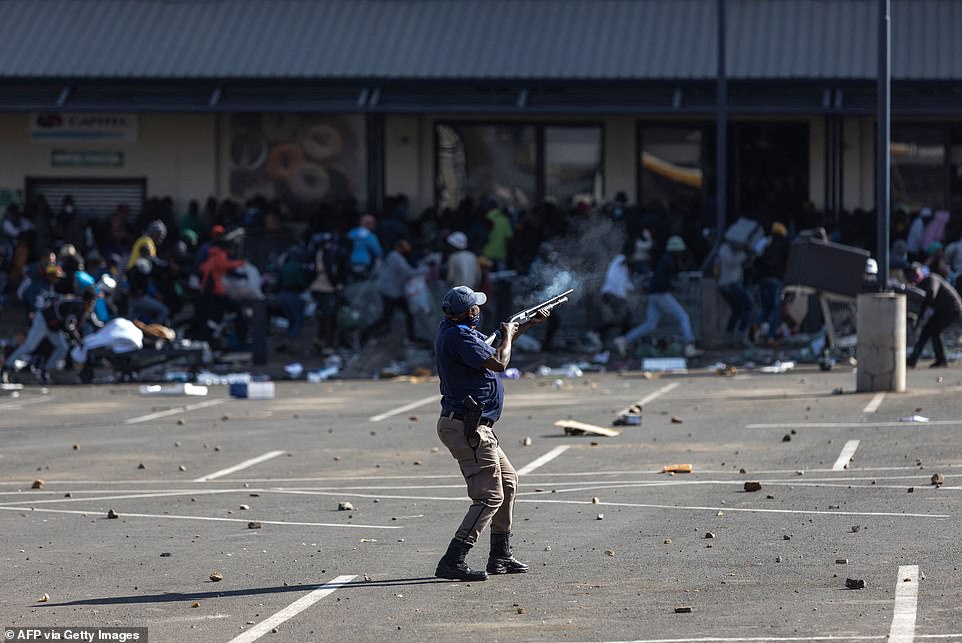 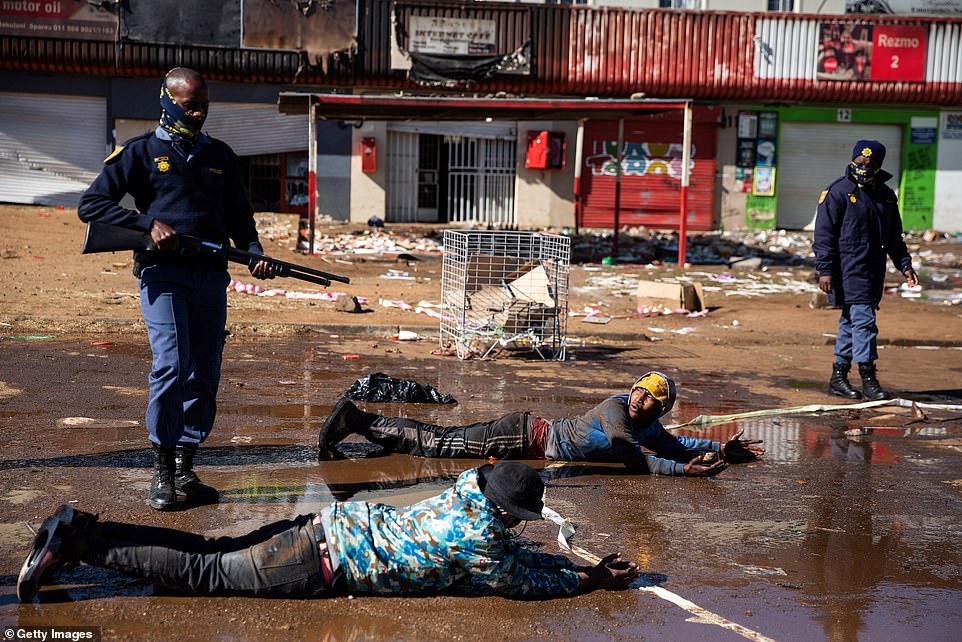 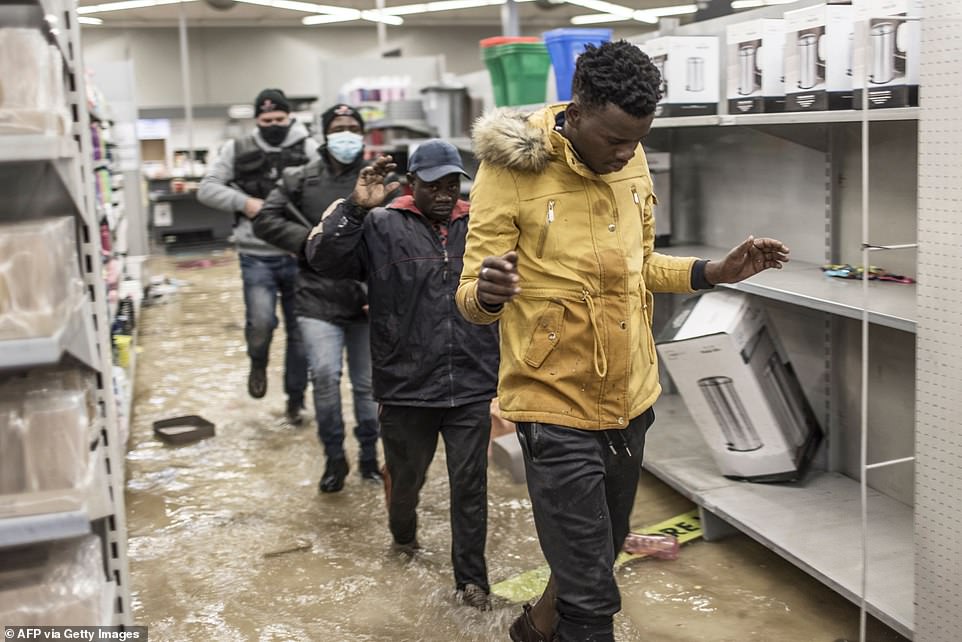 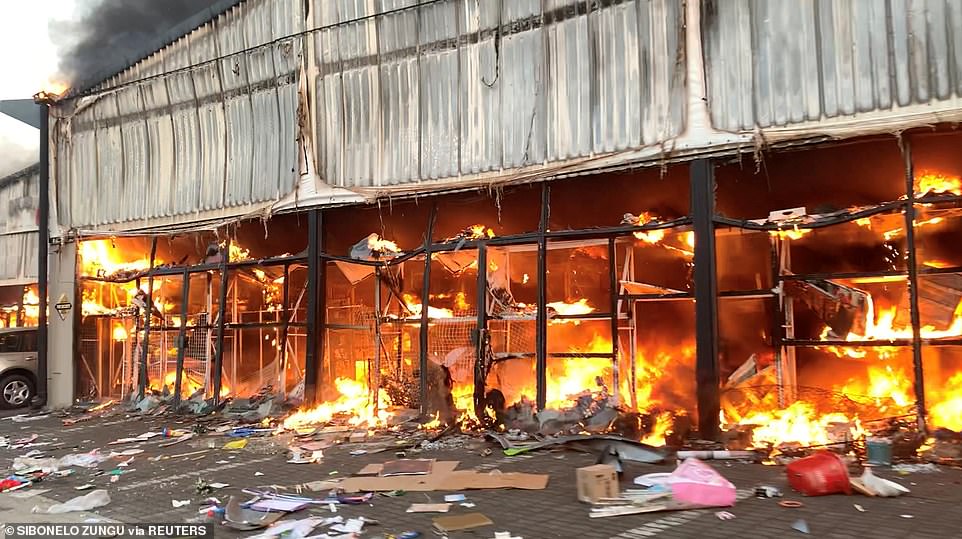 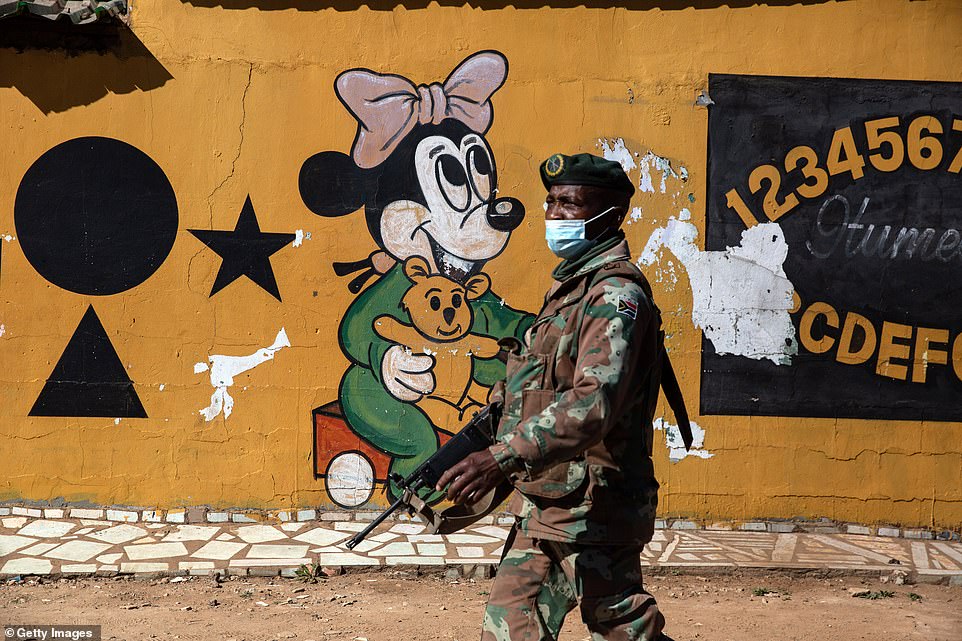 The deployment of 2,500 soldiers to support the South African police has so far failed to stop the rampant looting, although arrests were being made in some areas in Johannesburg, including Vosloorus in the eastern part of the city 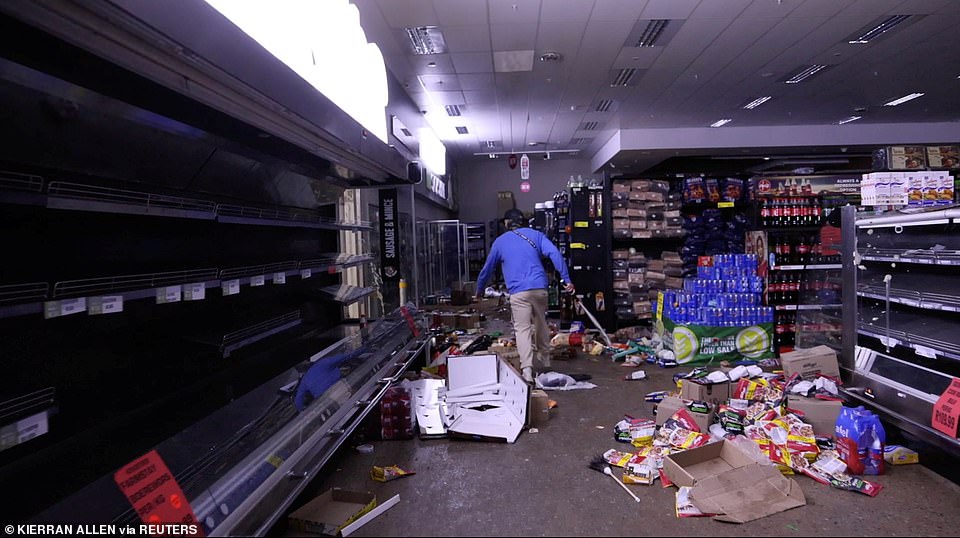 Shopkeepers have been firing at looters. Pictured: A self-armed local looks for looters inside a supermarket in Durban

In Durban, aerial footage showed hundreds of people looting a large shopping centre and carting off huge boxes of goods.

A woman was seen throwing her baby from the first floor of a building to save her from fire after shops below her apartment were set on fire. The child safely landed with a group of people on the street.

In his nationwide address Monday night, Ramaphosa lashed ‘opportunistic acts of criminality, with groups of people instigating chaos merely as a cover for looting and theft’.

‘The path of violence, of looting and anarchy, leads only to more violence and devastation,’ Ramaphosa said.

The chair of the African Union Commission condemned ‘the surge of violence that has resulted in the deaths of civilians and appalling scenes of the looting’, calling ‘for an urgent restoration of order’.

The largest opposition party, the Democratic Alliance, announced Tuesday it would file criminal charges against Zuma’s children and the leader of the leftist Economic Freedom Fighters (EFF), Julius Malema.

In a statement, the party accused them of using ‘social media to express comments which appear to encourage and incite the violence and looting.’ 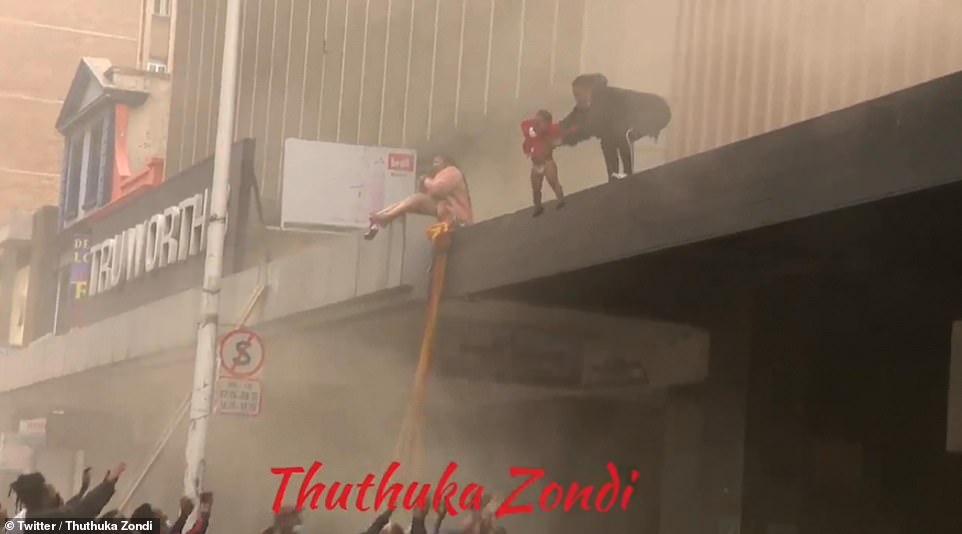 A woman was filed dropping her toddler from the roof of a burning shopping mall in Durban after looters ransacked the shops below and then set fire to them, threatening the apartment block above 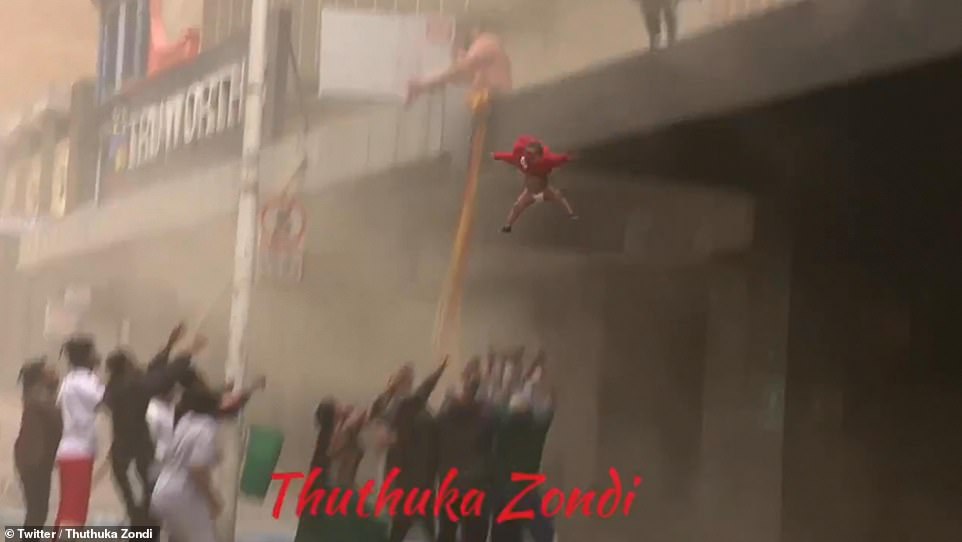 A crowd in the street could be seen catching the child and taking them to safety, leaving the mother to find another route out of the burning building 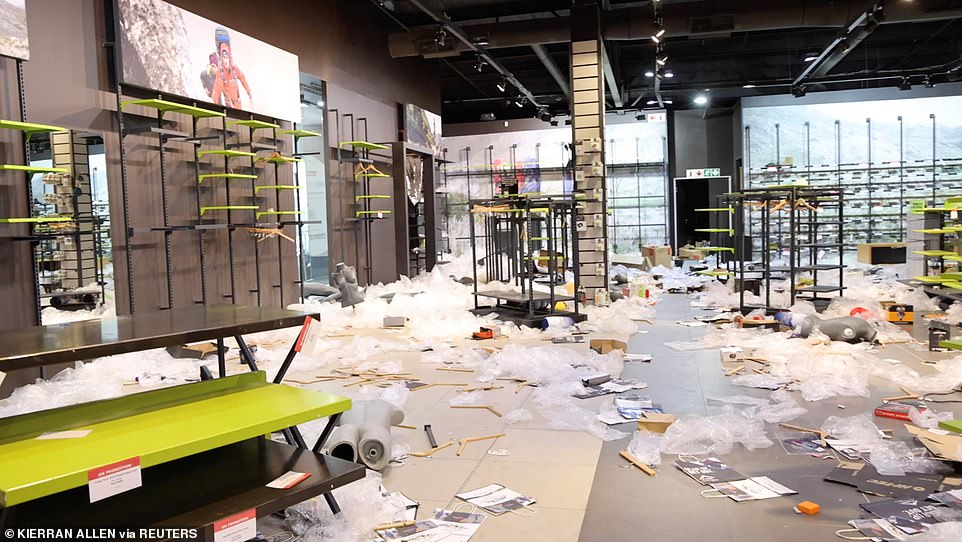 Empty shelves at a shopping mall in Durban, which has fallen victim to looting during the chaos following Zuma’s arrest 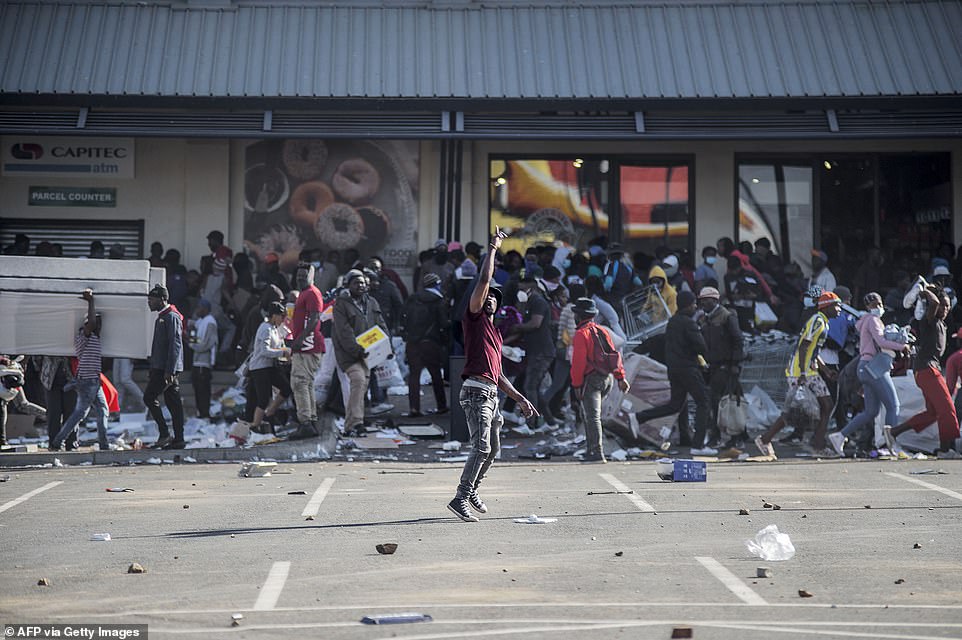 South Africa entered the fifth day of rioting on Tuesday with the death toll rising to 32 as police and the military struggle to quell the looting (pictured: Jabulani Mall in Soweto) and violence in Gauteng and KwaZulu-Natal provinces 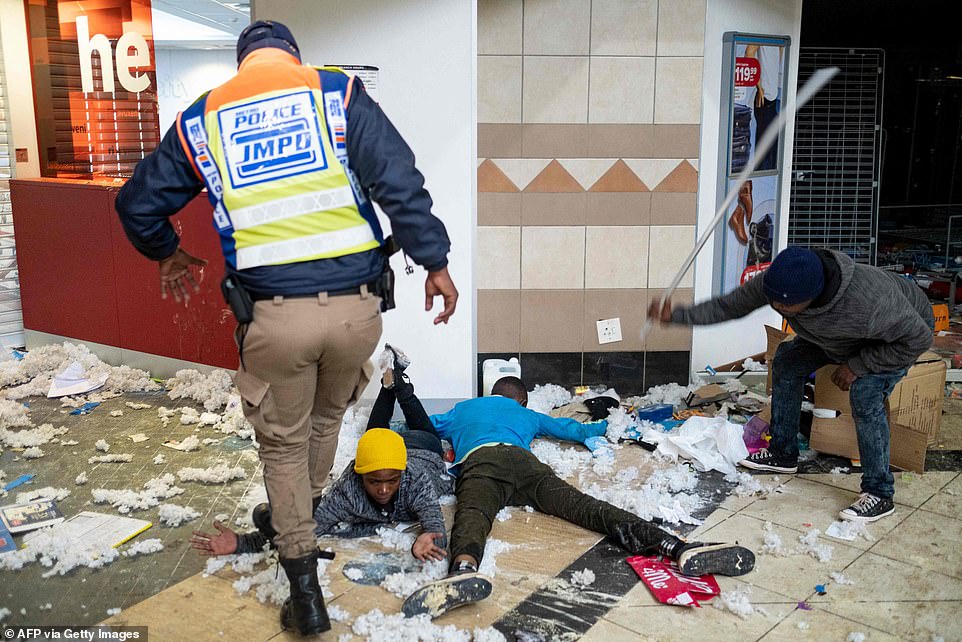 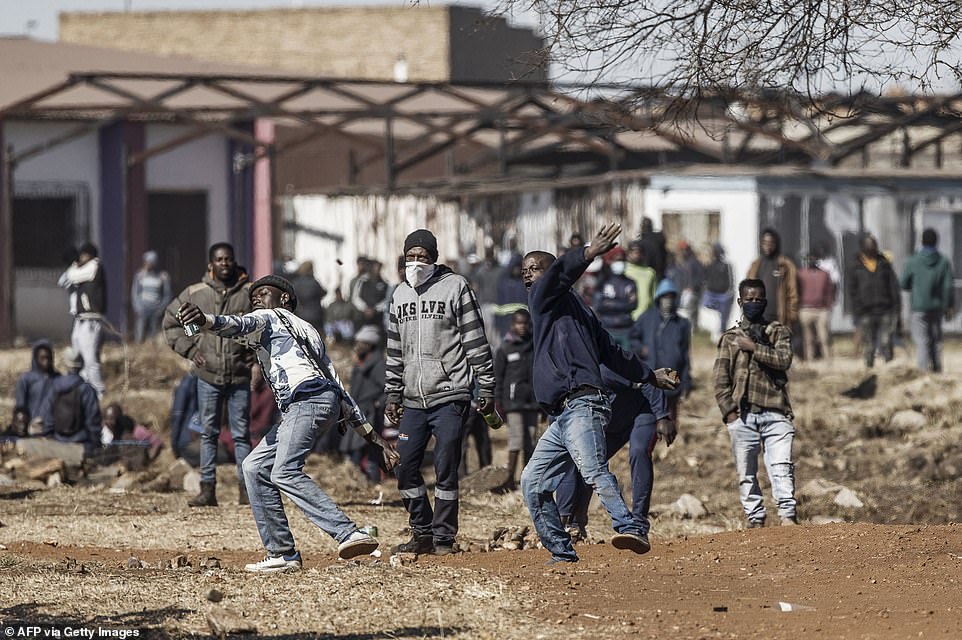 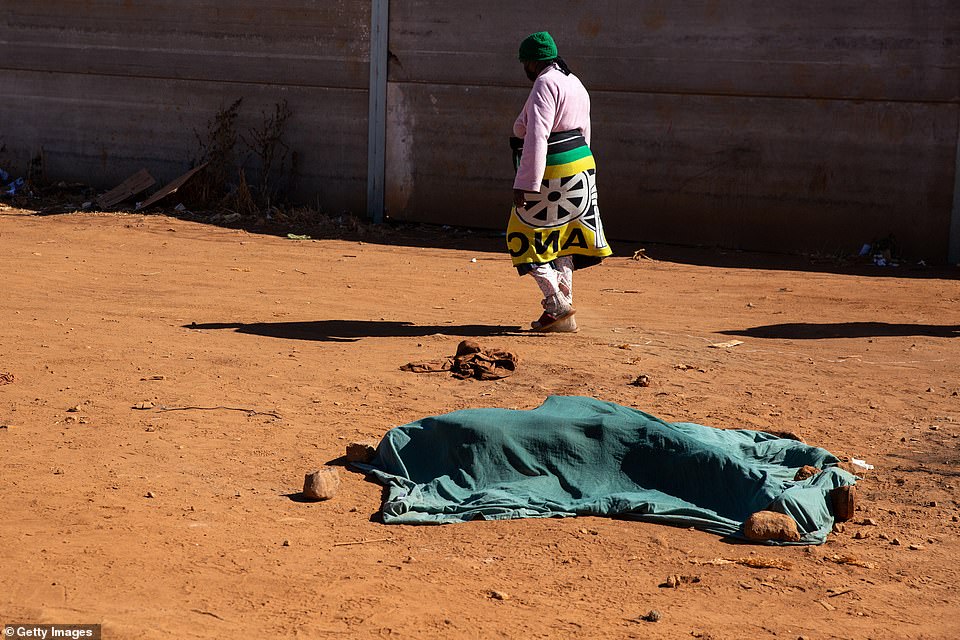 A woman wrapped in a blanket in the colours of the ruling ANC party walks past the bodies of two young men who were fleeing the police when they fell into a sewage pit and drowned in Vlakfontein, Johannesburg on Tuesday 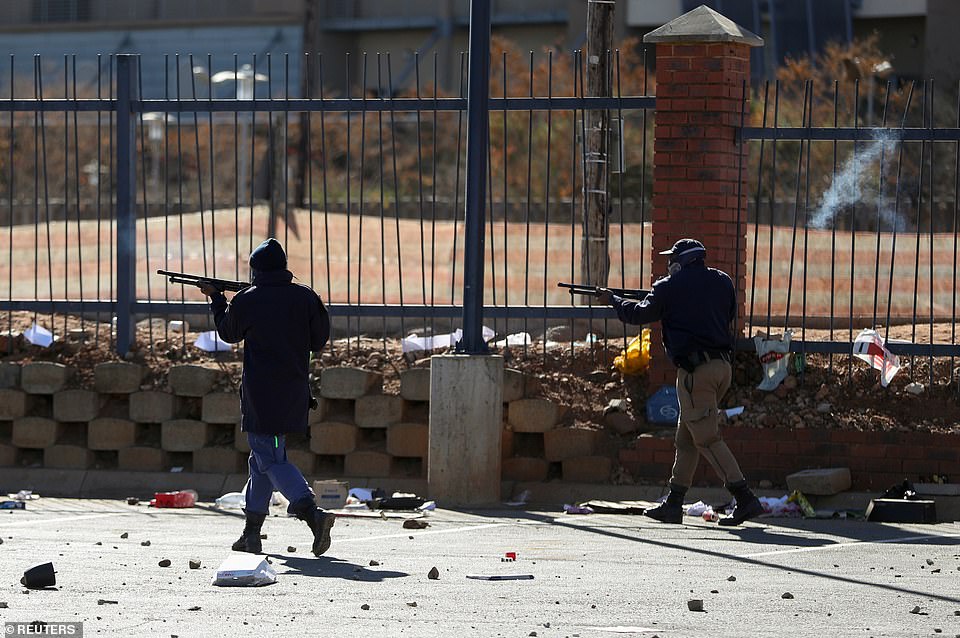 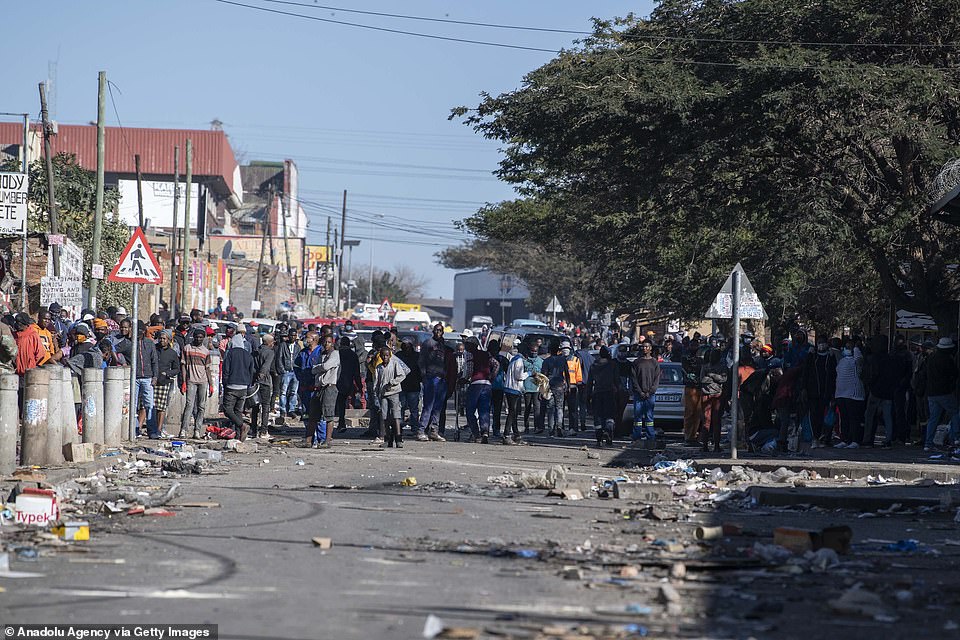 Police take to the streets in the Gauteng region on Tuesday

Once dubbed the ‘Teflon president’, Zuma was handed the jail term on June 29 by the Constitutional Court for bucking an order to appear before a commission probing the graft that proliferated under his administration.

He started serving the term on Thursday after handing himself in to authorities.

He is seeking to have the ruling set aside.

Zuma, 79, is a former anti-apartheid fighter who spent 10 years in jail in the notorious Robben Island jail off Cape Town.

He rose in democratic South Africa to vice president and then president, before being ousted by the ruling African National Congress (ANC) in 2018 as scandals proliferated.

But he remains popular among many poor South Africans, especially grassroots members of the ANC, who portray him as a defender of the disadvantaged.

South Africa is deep in an economic malaise, with cripplingly high levels of unemployment. Economic activity had already been badly affected by restrictions to stop the spread of coronavirus.