Police officer, 32, is jailed over Line of Duty-style corruption plot

Police officer, 32, is jailed for eight years over Line of Duty-style corruption plot after he helped crime gang rob from their rivals by stopping cars he knew had drug cash inside

A corrupt Metropolitan Police officer who helped an organised crime gang steal from their rivals in a Line of Duty-style multimillion-pound plot has been jailed.

Kashif Mahmood, 32, used his police car to stop vehicles he knew were carrying ‘significant quantities of criminal cash’ after being tipped off by the east London group.

He also travelled to locations where the gangsters knew money would be exchanged and took it himself while pretending to be doing his duties.

Judge David Tomlinson said Mahmood ‘abused his position of power, trust and responsibility’ and his actions were an ‘exploitation’ of his policing colleagues.

Mahmood’s eight-year sentence was reduced from 12 years due to an early guilty plea at Southwark Crown Court. 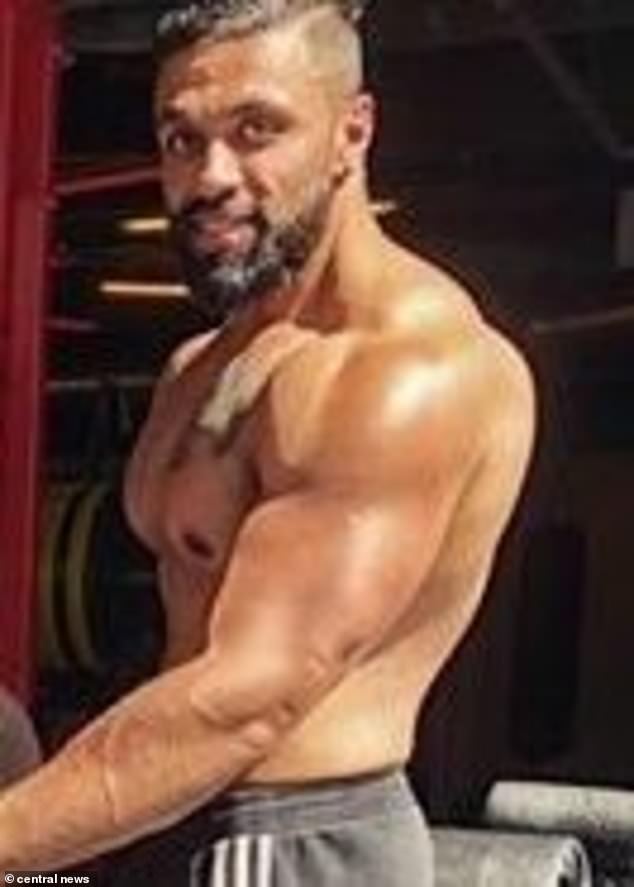 Kashif Mahmood, 32, used his police car to stop vehicles he knew were carrying ‘significant quantities of criminal cash’ after being tipped off by the east London group 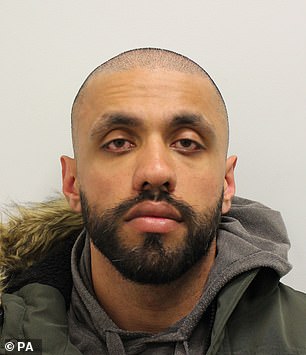 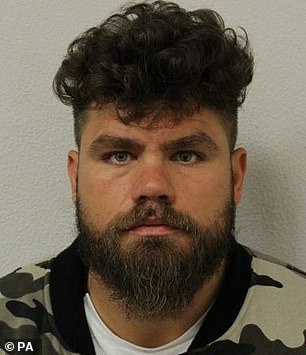 The court heard he was a member of a ‘highly lucrative’ operation which seized at least £850,000 from criminal couriers under the pretence of a ‘lawful exercise of his powers’.

He was accompanied by Romanian bodybuilder buddy Ioan Gherghel, 34, posing as his police partner, on two occasions last March.

Mahmood was sentenced after admitting conspiracy to acquire criminal property and misconduct in public office, although he did not receive any additional jail time for the latter charge.

Judge Tomlinson said the group put criminal couriers in harm’s way, as they would not have been able to explain to their bosses how the money had been seized.

Peter Ratliff, prosecuting, said: ‘Mahmood was at the heart of the most audacious aspect of the organised crime group’s criminal conduct, the conspiracy to acquire criminal property.

‘It was this aspect of the criminality which led to their downfall. 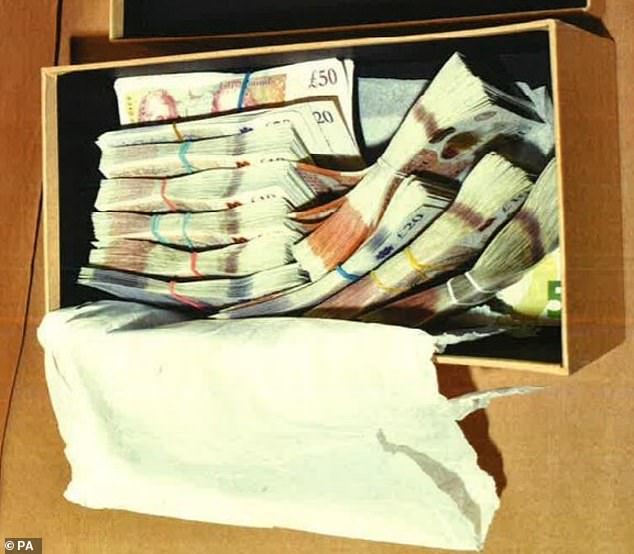 Pictured: Wads of cash found by the Metropolitan Police inside the home of Ioan Gherghel 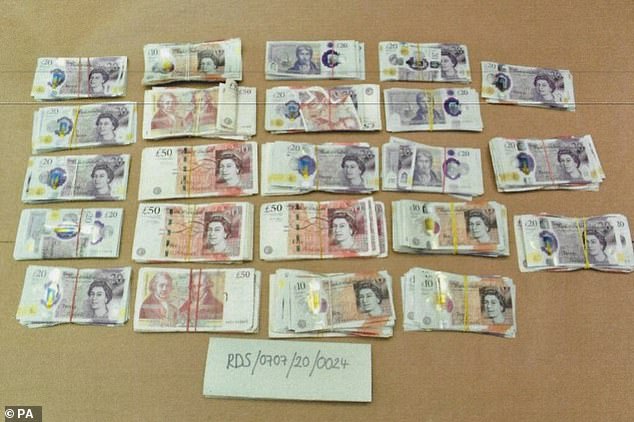 ‘As and when required by the organised crime group, Mahmood would take marked and unmarked police vehicles, and, dressed in his police uniform, travel to locations where the organised crime group were engaged in or aware of the transfer of significant quantities of criminal cash, which was either to be laundered or reflected payment for wholesale quantities of drugs.

‘Mahmood would then endeavour to seize this, under the pretence of the lawful exercise of his powers as a police officer.

‘In that regard he was assisted on two occasions by Gherghel, who would purport to be a police officer.

‘There was a further unknown but significant seizure on 8 March 2020; two incidents where at least attempts were made to seize substantial quantities of cash, and one attempt to seize £500,000 in cash.

‘It was focused on the criminal activity of a corrupt police officer and his criminal associates.

‘The investigation revealed Moshin Khan and his brothers Shazad Khan and Shabaz Khan were engaged in the wholesale movement of significant quantities of class A drugs and were laundering thousands of pounds in cash.’

Mahmood seized unsuspecting criminals cash ‘under the pretext of lawful exercise of his powers as a police officer’, said Mr Ratliff.

He also ‘misused police computers’ to gather intelligence on behalf of his criminal associates. 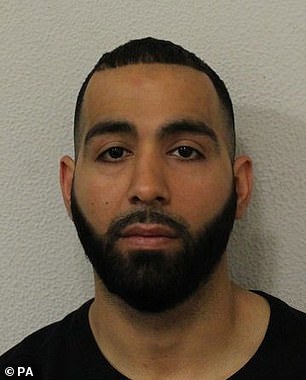 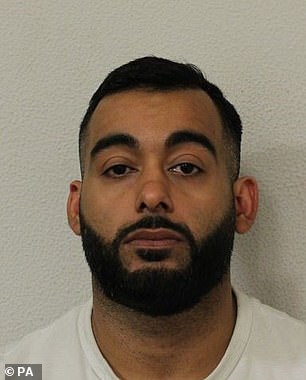 Mohsin Khan, 36, and Shazad Khan, 33, from Ilford, were sentenced alongside Mahmood 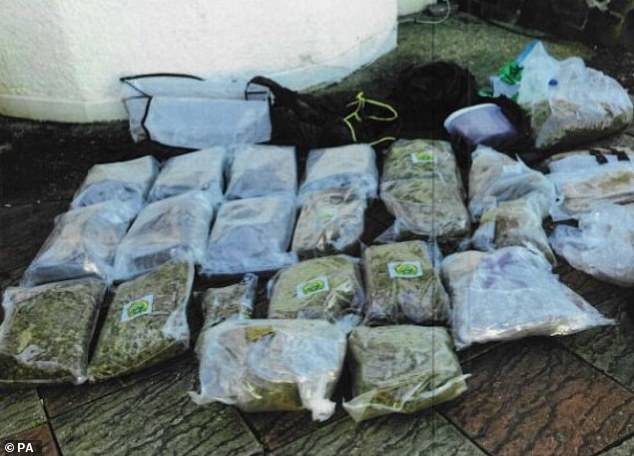 Pictured: Cannabis found inside the home of Shabaz Khan during the investigation

The defendant was working at the Emergency Response Team at Stoke Newington police station at the time of the plot, between November 2019 and July 2020.

He was formally kicked out of London’s police force at a disciplinary hearing last year.

The tribunal found he had driven a marked police car while his associate posed as an officer to seize cash which was due to be laundered or was payment for drugs.

He was dismissed without notice after the panel ruled he had breached standards of professional behaviour in respect of discreditable conduct, honesty and integrity and duties and responsibilities.

The officer had already survived a misconduct hearing after assaulting a man in Lower Clapton when he was based at Stoke Newington Police Station in May 2017.

Mahmood was sentenced to 200 hours community service at Hendon Magistrates’ Courti the following year but allowed to remain an officer. 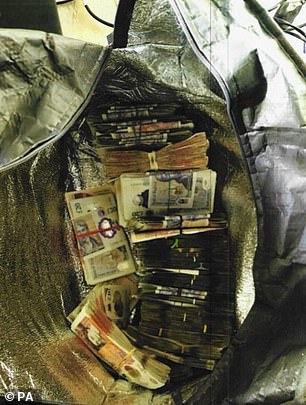 Pictured: Cash found at the home of Shabaz Kha

Mitigating, William Emlyn Jones told Southwark Crown Court today: ‘He accepts that this is no one’s fault but his own. It is his own fault he has lost his good character and his hard-earned reputation.’

He said Mahmood achieved his ‘boyhood dream’ of becoming a police officer at the age of 21, despite having a ‘challenging’ childhood during which he was stabbed when he refused to join a neighbourhood gang.

‘The punishment he has brought upon himself is substantial. It seems that in the end his background has caught up with him.

‘He thought he had escaped but it called him back in.’

Mr Emlyn Jones said Mahmood’s remorse was ‘genuine’, and added that he was ‘misled’ about the extent of the gang’s criminal activity and did not take a cut of the money seized.

He told the court Mahmood did not live a ‘lavish lifestyle’, as suggested, and three of the four designer watches submitted as evidence were ‘cheap knock-offs’.

Director of major investigations Steve Noonan said: ‘His actions were a complete betrayal of public trust and confidence, and have no place in policing.

‘As a body completely independent of the police, the IOPC oversaw this matter to provide assurance it was being investigated thoroughly and impartially by the Metropolitan Police Service.

‘This investigation has now resulted in a conviction and lengthy sentence for Pc Mahmood. It sends a clear signal to police officers who engage in corrupt activity that they will be caught and they can expect to pay a high price for their crimes. 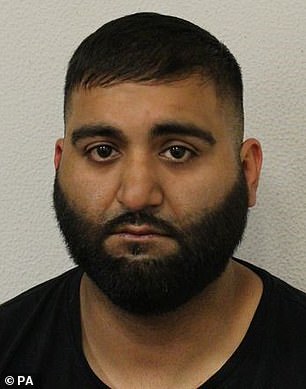 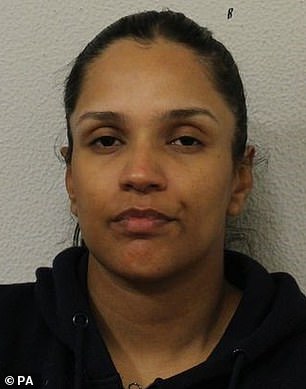 Shabaz Khan, 33, of Barkingside, east London, and Maria Shah, of Ilford, were sentenced

‘While all the evidence we have seen points towards this being an isolated case of police corruption on this scale, we have to remain vigilant and will continue to pursue allegations of corruption vigorously.’

All were banned from travelling outside of the UK for five years after their release.