Kuala Lumpur: Malaysian police raided the office of broadcaster Al Jazeera said in Kuala Lumpur on Tuesday, amid an investigation into a program it aired on the country's treatment of undocumented foreign workers during the coronavirus pandemic.

The July 3 program, titled Locked up in Malaysia's lockdown, prompted a backlash in the south-east Asia nation, with authorities branding the report inaccurate, misleading and unfair. 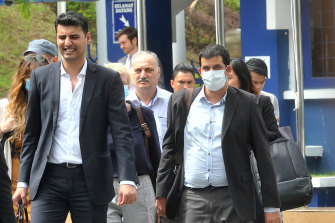 Australian Al Jazeera journalist Drew Ambrose, right, leaves the Bukit Aman police headquarters in Kuala Lumpur after being questioned by the police over the documentary on July 10.Credit:AP

Rights groups have accused the government of suppressing media freedom after Al Jazeera six journalists were called in for questioning by the police on July 10 and an investigation opened into alleged sedition, defamation and violation of a communications law. Five of the journalists are Australian, among them enior producer and correspondent Drew Ambrose, the network’s bureau chief, executive producer, cameraman, and digital crew.

Malaysian police seized two computers from the Al Jazeera office during Tuesday's raid, the Qatar-based broadcaster said in a statement.

The broadcaster condemned the raid in a statement, saying it came "on the back of international condemnation of the actions of the Malaysian authorities. Al Jazeera views this not only as an attack on itself but on press freedom as a whole."

"Conducting a raid on our office and seizing computers is a troubling escalation in the authorities' crackdown on media freedom and shows the lengths they are prepared to take to try to intimidate journalists," Al Jazeera said.

Al Jazeera said it stood by its report and called on authorities to drop the criminal investigation.

The police said in a statement the raid was conducted along with Malaysia's communications regulator, which will carry out "further analysis" on the seized computers. Statements were taken from additional witnesses during the raid.

"No individuals or entities can escape action if they clearly violate any laws enforced in Malaysia," it said.

Malaysia arrested hundreds of undocumented foreigners, including children and Rohingya refugees, after the country imposed a lockdown to contain the spread of the new coronavirus.

Human rights activists have condemned the arrests as inhumane. Malaysian officials have said they were necessary to prevent the spread of the virus.

Activists have voiced concern that the five-month-old administration of Prime Minister Muhyiddin Yassin is stifling dissent amid a series of clampdowns, an accusation it has denied.

Last month, authorities arrested a Bangladeshi man who criticised the government's treatment of migrant workers in the Al Jazeera program.