‘Prayed in Jesus’ name’: Killer truckie told boss he was too tired to drive and seeing witches, court hears

The truck driver who killed four police officers on the Eastern Freeway says hours before the fatal crash he told his boss he was tired and had been cursed by a witch, prompting his manager to “pray in Jesus’ name to take the curse away”.

Mr Tuteru, the 50-year-old supervisor at the trucking company Connect Logistics where Singh also worked, is facing a committal hearing after he was charged with dozens of offences, most of which are related to his duties overseeing Singh.

The most serious allegations are four counts of manslaughter over the deaths of four police officers who were killed on the Eastern Freeway on April 22 last year. 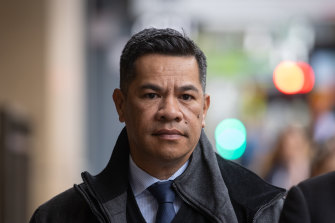 Trucking company manager Simiona Tuteru, who has been charged in connection to the Eastern Freeway crash, walks into court in early May.Credit:Simon Schluter

Six charges of obtaining financial advantage by deception were withdrawn by the prosecution on Wednesday.

The officers’ family members were present in court on Wednesday as Singh, jailed in April for a maximum 22 years after pleading guilty to four counts of culpable driving causing death, gave evidence.

Singh, dressed in a grey tracksuit and with shaved hair, told the court he had a conversation with Mr Tuteru before he started his shift on the afternoon of April 22 last year. 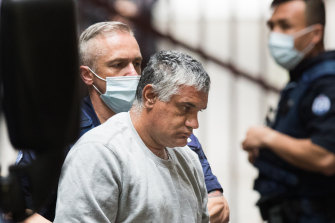 Mohinder Singh leaves the Supreme Court during his trial in March. He was jailed for 22 years.Credit:Jason South

He said he told his boss he was seeing things and had been cursed by a witch, which prompted Mr Tuteru to start praying.

“It was basically a prayer, he put his hand on top of my head and prayed in Jesus’ name, take the curse away of the witch,” he said. “[I told him] I am too tired to drive and haven’t slept for while.

“I definitely said I was unfit to drive and very tired.”

But Mr Tuteru’s lawyer David Hallowes put it to Singh that he had never raised any issues about his fitness to drive with his boss.

“Is it possible you didn’t actually say to Simon anything about you being too tired to drive?” he asked.

In Singh’s police statement tendered to the court, he claimed Mr Tuteru accompanied him to his car after he confided in his boss that he had been cursed by a witch and was seeing things.

“Simon told me that sometimes witches leave behind voodoo dolls or hair or something.

“We were looking for something that wasn’t mine. While we were doing this Simon talked to me about witches and curses and how they worked. I don’t remember the details of what he told me, at the time it made lots of sense to me though,” he wrote.

“After we did the search and didn’t find anything he placed his hand on my head and prayed – I don’t remember the exact words of the prayer but I do remember at the end of it he said ‘In Jesus name I cast the spell out of you’.

“I also remember while we were searching the car he said that he had experiences with witches in Africa and this is where he learnt how witches work. After he prayed on me he then said – OK you are right to go now – I just need you to do the load to Thomastown and then you can come back – see how you are feeling and go home.”

Singh says he agreed to drive because he didn’t want to be fired.

Following the crash, Singh says he was standing in the emergency lane of the freeway and he called Mr Tuteru and told him he had “killed some police officers”.

“He replied something like, ‘Don’t say nothing to no one’,” Singh said in his statement. “He didn’t ask me anything about the incident, I just remember saying to him that I fell asleep.”

The statement also details how on the day of the crash he told his kids he was “seeing stick figures that were coming out of the cracks and walls and attacking me”.

Singh told the court he had been seeing ghosts and other supernatural phenomena including “visions of parallel universes” for many years.

Mr Hallowes put it to Singh that he had tried to “shift the blame” of the collision, telling police officers in the aftermath of the crash that the “truck had wobbled”.

“I don’t remember that,” responded Singh. “I feel asleep, I was asleep.”

“Would it have been you trying to shift the blame a bit, saying maybe it was something wrong with the truck?” said Mr Hallowes.