Preparing for mayhem: Businesses board up as the NYPD braces for battle with looters and Australia and Canada tell their citizens not to travel to the US to avoid post-election violence (even though they’re already banned because of COVID)

Businesses are boarding up across New York City as special police units gear up to tackle looters and rioters and foreign countries are warning the few travelers who are not banned from entering the country to avoid it for fear of civil unrest after the election.

Dozens of retailers in Manhattan, including stores on Fifth Avenue and in SoHo, have already boarded up their windows in anticipation of unrest after Tuesday’s election and similar scenes are playing out in Washington DC and L.A.

While many offices remain closed due to the COVID-19 pandemic, a small number of doctors and dentists offices are quietly telling patients that they will close on November 4.

New York’s restaurants and bars – which are still struggling to recover after being forced closed for months – are waiting gingerly to see what unfolds.

Many are likely to pull their outdoor dining furniture inside but remain open in the hope of business, according to industry experts.

Small retailers are ‘scared’ of the potential looting but are ‘more scared’ of another lockdown so are choosing to stay open for the meantime, risking their inventory.

Canada and Australia are telling citizens to avoid parts of the US where there are demonstrations for fear of potential violence, even though travel from both countries is currently banned due to the pandemic. 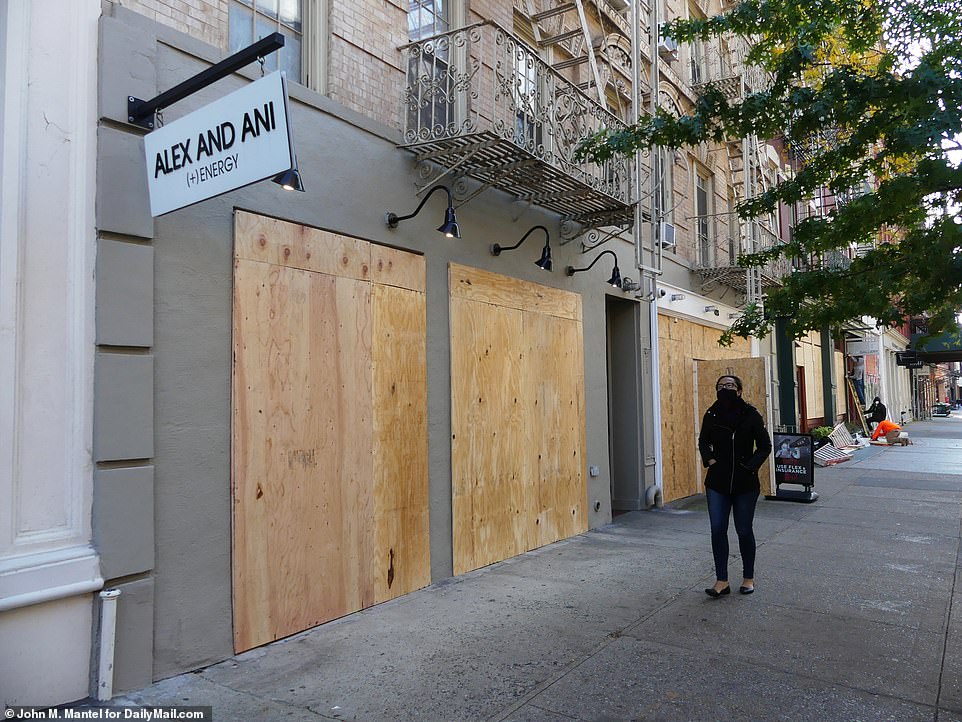 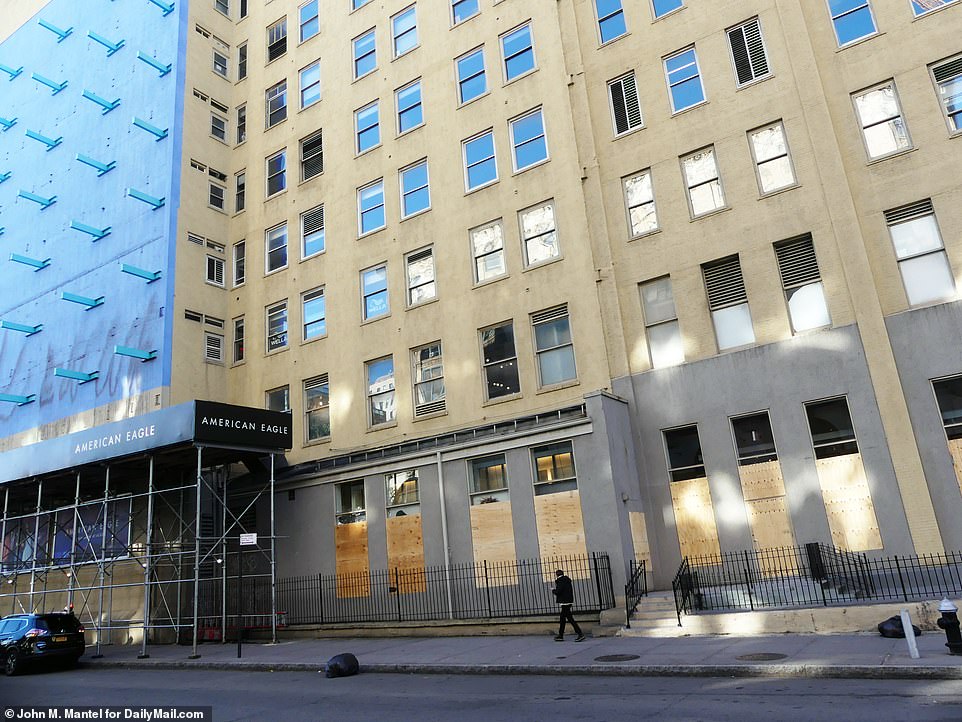 American Eagle on the corner of Broadway and Houston was also boarded up, as was the building next to it 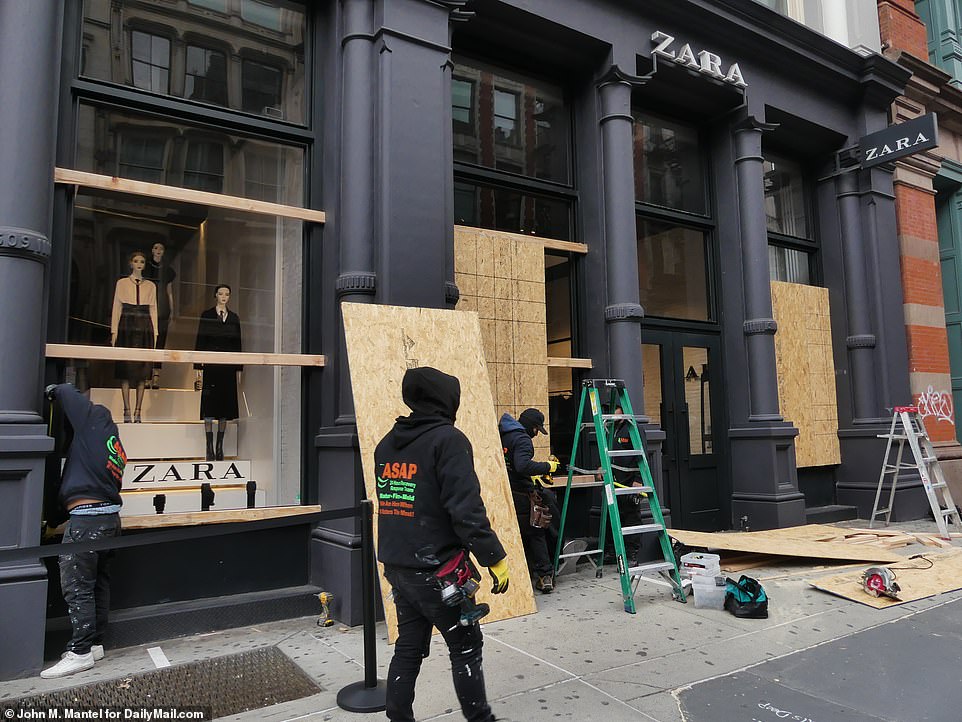 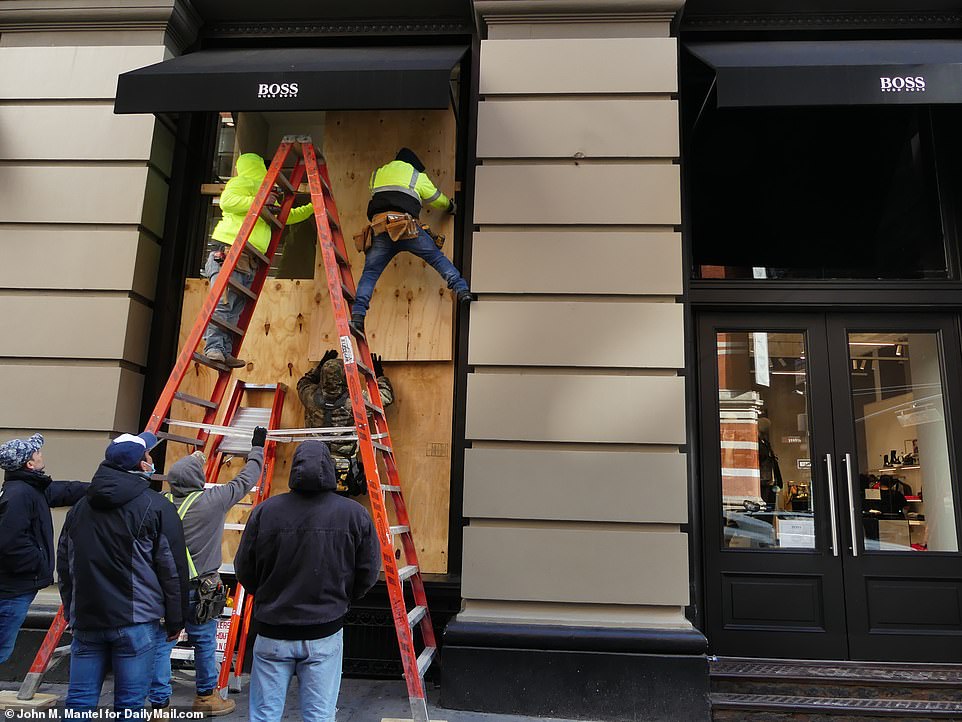 Hugo Boss in Soho on Monday. In June, many stores across the iconic shopping district were ravaged by looters 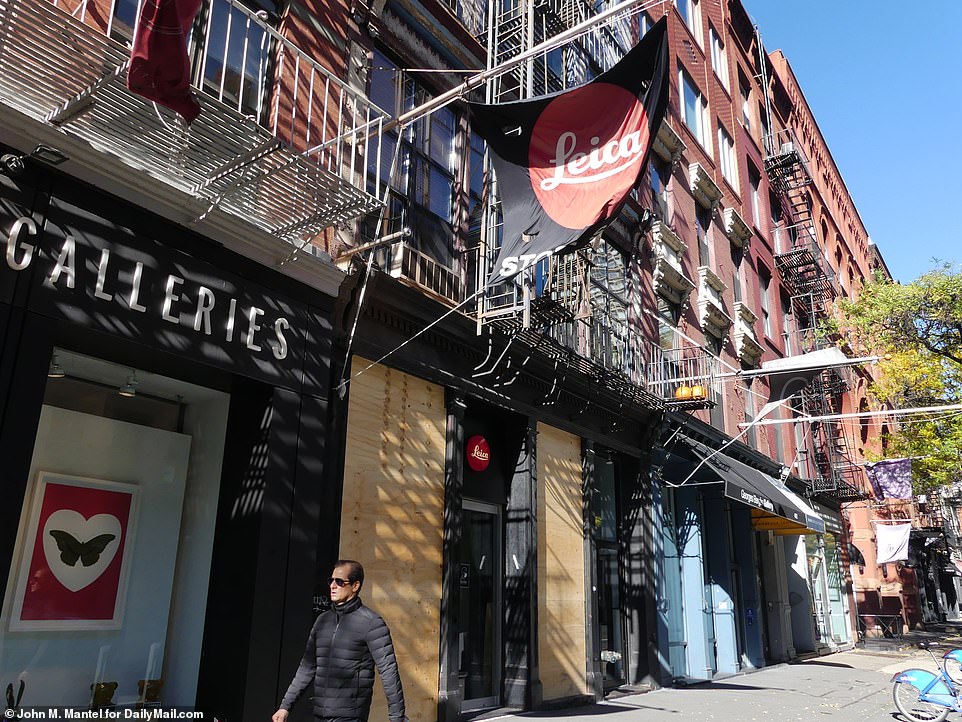 West Broadway in Soho on Monday. The streets of New York were emptier than usual due to a combination of the city being quieter because of COVID, cooler temperatures and anticipation for Tuesday’s election 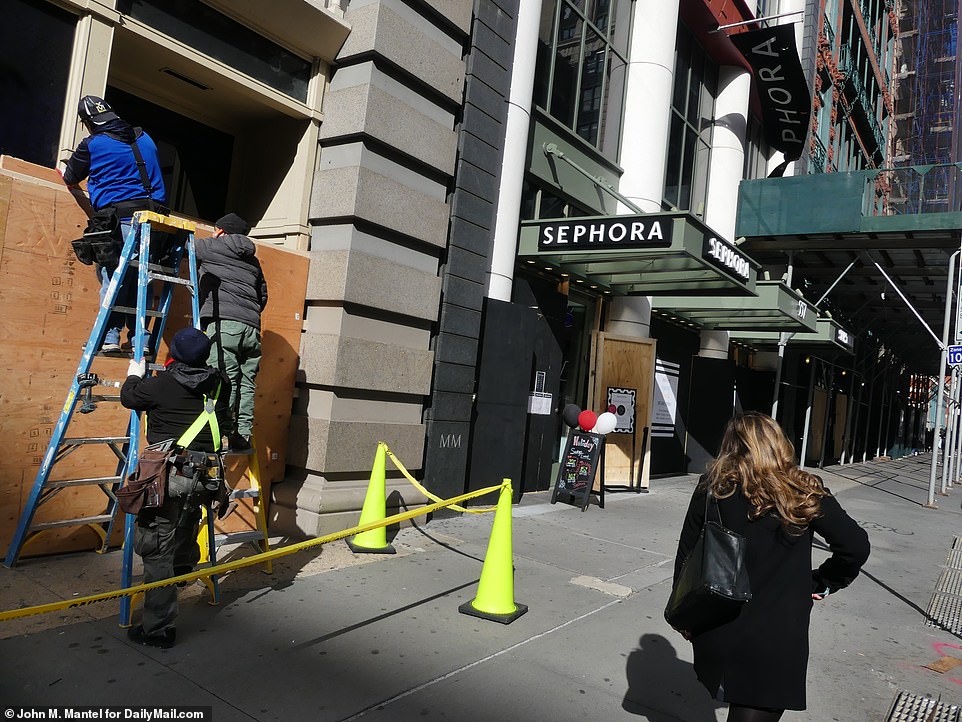 Sephora was also being boarded up on Monday. Most of the stores will remain open but with reduced hours on Tuesday to allow staff to vote 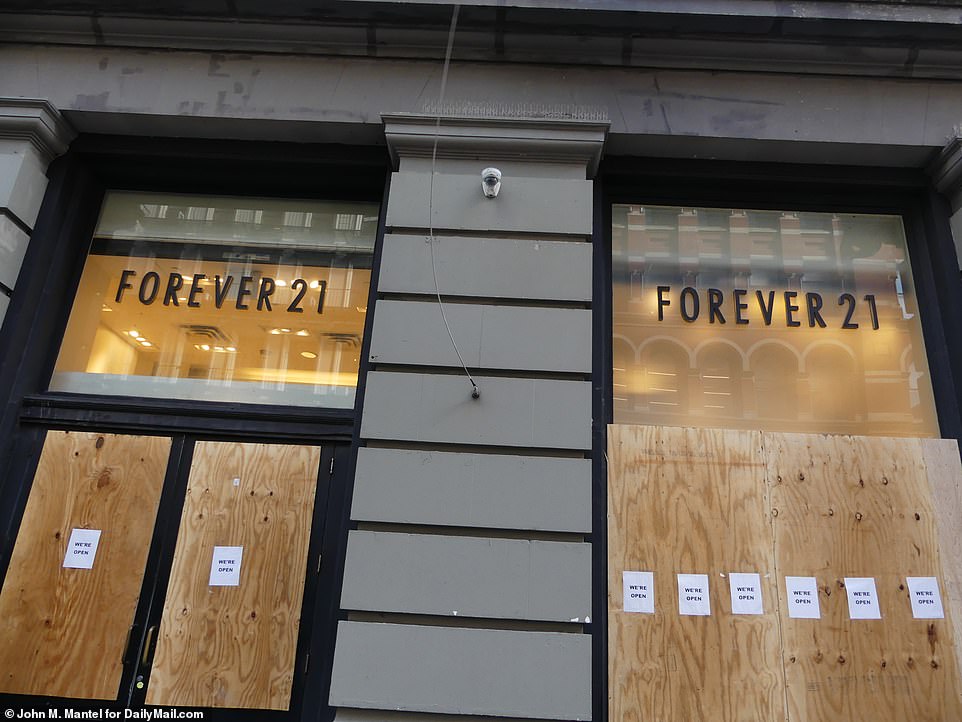 Forever 21 in Soho on Monday had ‘we’re open!’ signs plastered across the plywood boards to still try to attract customers 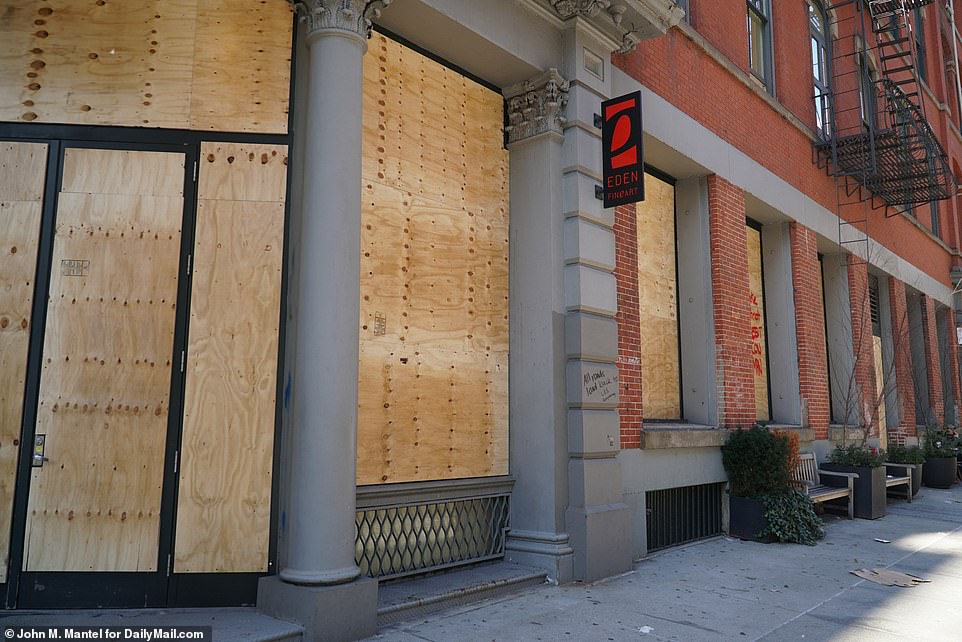 Eden art gallery in SoHo was also boarded up on Monday ahead of potential unrest. The art gallery will be closed until Friday

Despite Mayor Bill de Blasio claiming on Monday morning that there was no specific threat, the NYPD’s elite Strategic Response Group – which consists of a group of 600 cops on bikes – is preparing ‘for the worst’.

‘We’re hoping for the best this week but we’re prepared for the worst. People have gotten emboldened out there. 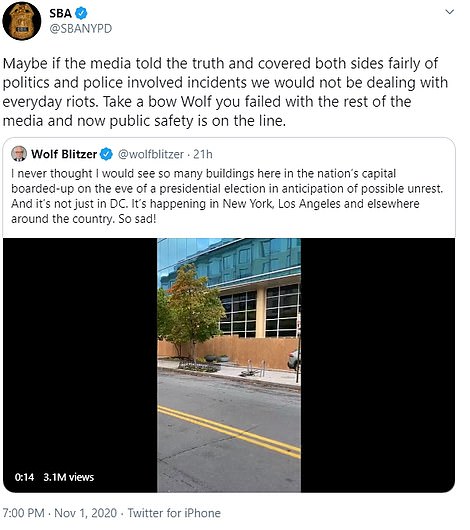 ‘We’re living through unprecedented times. But we’re prepared for whatever might happen,’ Deputy Chief John J. D’Adamo, the boss of the unit, told The New York Post this week.

The Sergeants’ Benevolent Association – the largest NYPD union – warned on Twitter that ‘public safety is on the line’.

‘NYC and NYS need a change. Laws are not enforced and violence continues to claim our streets,’ the union said in a tweet as it endorsed Republican Congressional candidate Nicole Malliotakis.

Earlier, the union responded angrily to a tweet from CNN’s Wolf Blitzer who had shared a video of boarded up streets in Washington DC, saying it was something he’d never seen before an election.

‘Maybe if the media told the truth and covered both sides fairly of politics and police involved incidents we would not be dealing with everyday riots.

‘Take a bow Wolf you failed with the rest of the media and now public safety is on the line,’ the union said.

Last week, cops clashed with BLM protesters in Downtown Brooklyn after what was intended to be a peaceful protest turned violent. 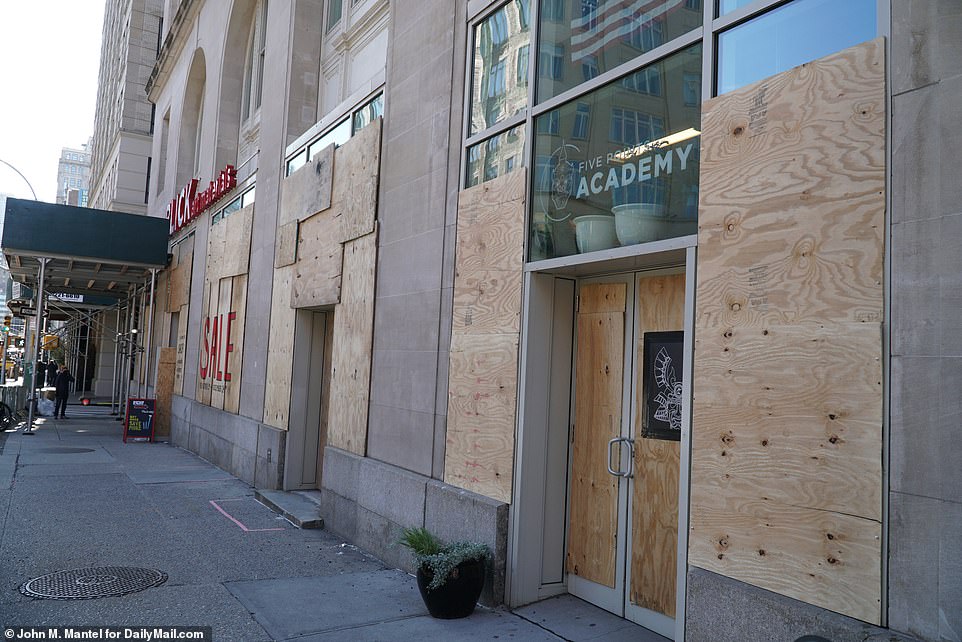 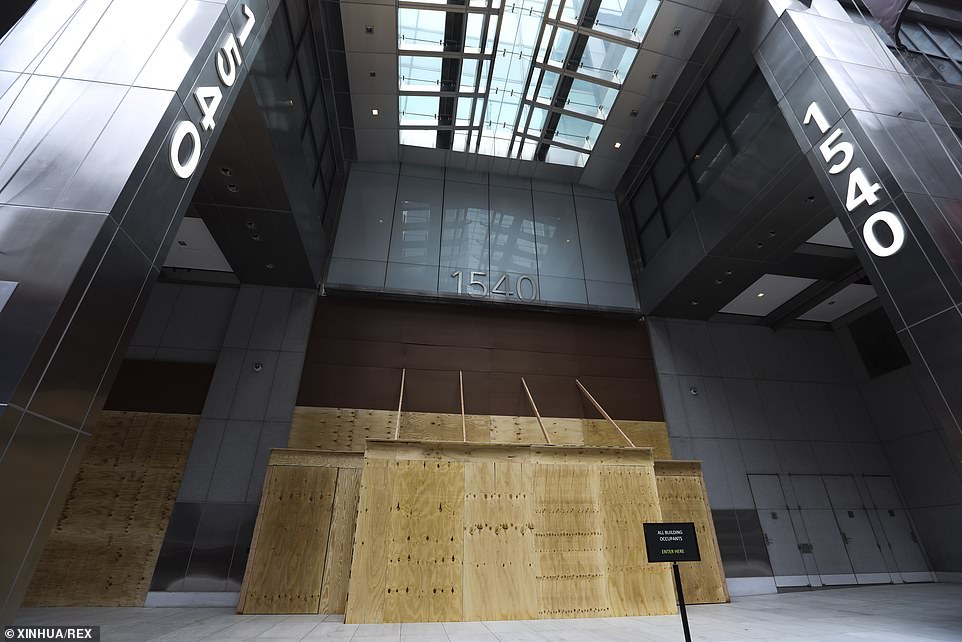 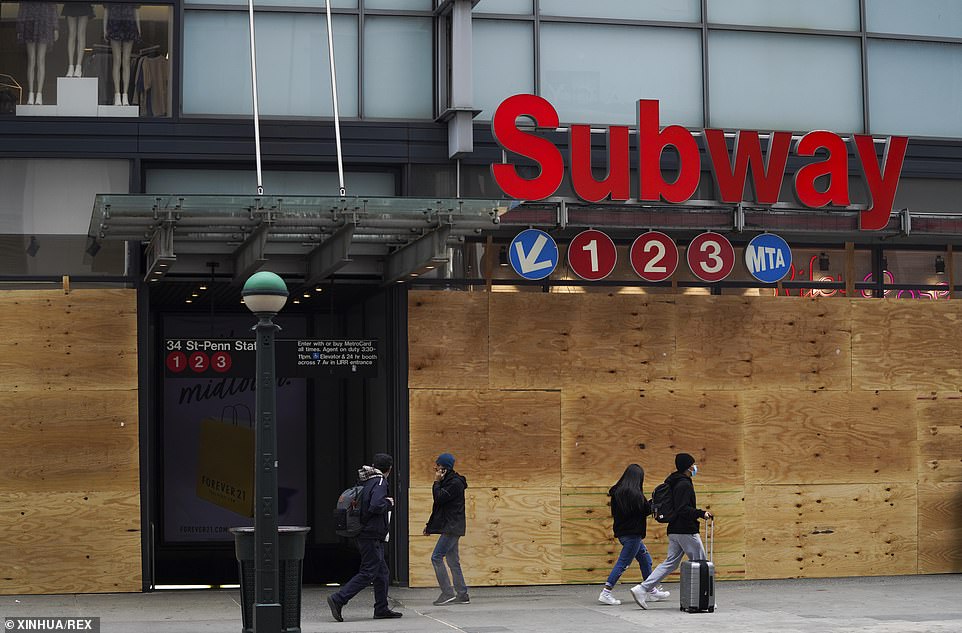 Stores surrounding the 34th Street Subway have also been boarded up ahead of Tuesday’s election. The subway is still being closed every night for intensive cleaning 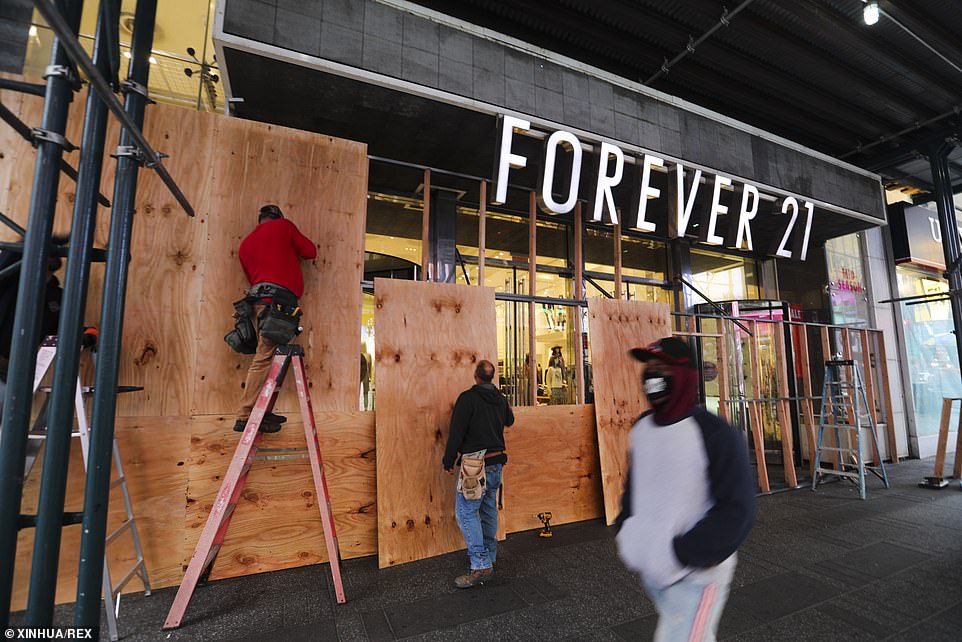 Workers board up a store in Times Square in New York, the United States, on Nov. 1, 2020 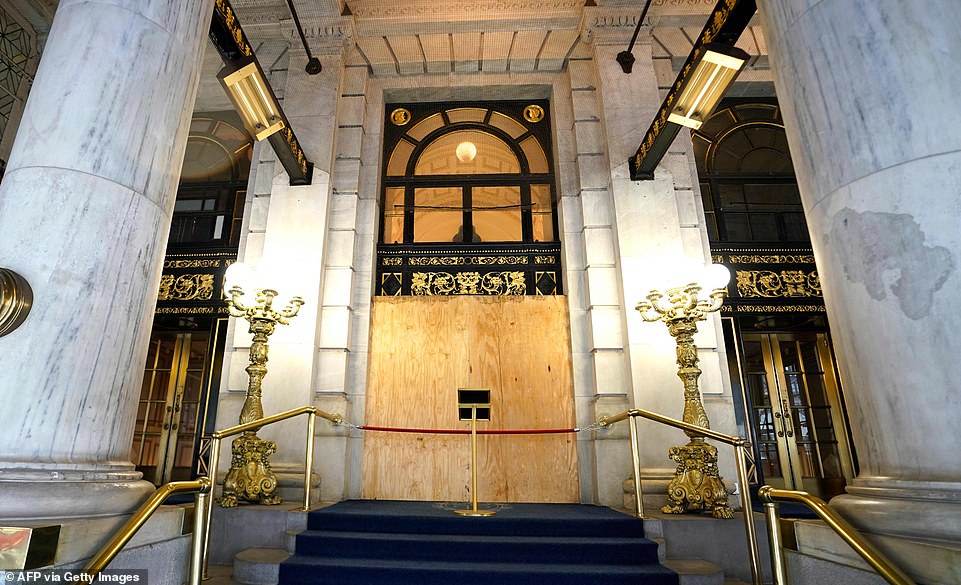 The above image shows the entrance to the Plaza Hotel, which is located on the corner of Fifth Avenue and Central Park South

The protests this week follow months of unrest and anger against police that many say they’ve never seen before.

‘I was a cop during Occupy Wall Street and I thought that would be the worst I’d ever see but I was wrong.

New York City’s wealthy elite are hiring armed guards in the run-up to the election.

At the Time Warner Center on Columbus Circle, managers are deploying off duty cops with ‘submachine guns’ to stand watch, according to the New York Post.

Other top buildings, such as 220 Central Park South on Billionaire’s Row, say they are already well guarded but will take extra precautions, like keeping entrances locked at night.

‘In 16 years I’ve never seen anything like what’s going on now. We’re getting bottles, bricks, you name it thrown at us now,’ one, who wished to remain anonymous, said.

While the police force is actively preparing for possible unrest this week, some businesses are waiting to see whether or not they should close.

Andrew Rigie, director of the New York Hospitality Alliance, told DailyMail.com on Monday morning that restaurants were not yet boarding up.

It is mostly retailers who are nervous about looting, especially given how much of it was seen across the city during the summer amid unrest over the killing of George Floyd.

‘Many are scared. Although it seems to depend on the neighborhood. It seems retail and restaurants are the pawns in a game that exceeds means and influence. Most just want to be left alone.

‘There is a lot of fear of future lockdowns beyond the potential for riots,’ Bruce Backman, a spokesman for a coalition of small retailers, said.

In Washington DC, Fannie Mae, a federal mortgage loan company,  said it would close its offices all week ‘out of an abundance of caution’.

FreedomWorks, a conservative advocacy group, has also closed its doors.

Most travelers from other countries are still prohibited from entering the US. However some of the few who are allowed entry are being told to avoid it.

Australia is advising citizens not to travel at all. In a statement, the Department of Foreign Affairs and Trade said: ‘Protests and demonstrations continue in several US cities.

‘Avoid areas where protests are occurring due to the ongoing potential for violence.’

People who have been in mainland Europe, China, Iran, Brazil, the UK and Ireland are still banned from entering the US under the COVID-19 rules.

Canada is still advising residents not to travel outside of the country but those who do are now also being told to avoid areas of protests and demonstrations after multiple nights of violence in Philadelphia over the police shooting of Walter Wallace Jr. 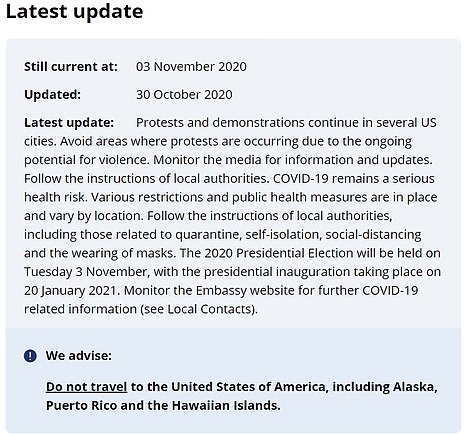 On its tourism website, Canada says: ‘Demonstrations have been taking place in Philadelphia, since the shooting of an American citizen by police on October 26, 2020.

Clashes have occurred between protesters and police.

‘Protests and demonstrations have occurred since May 25, 2020, in several US cities. Clashes have occurred between protesters and police, and have included the use of tear gas. Confrontations have resulted in casualties.

‘Further protests could occur and local authorities could impose additional curfews without notice.’

Both countries are issuing the guidance despite already having bans on people leaving their countries because of COVID-19.

In Washington, they have been boarding up stores for weeks.

‘We have to be ready.  They smashed the windows and just walked out with everything,’ said Ali Khan 66, who works at a now-barricaded downtown Washington liquor store where thousands of dollars in merchandise was stolen in June protests. 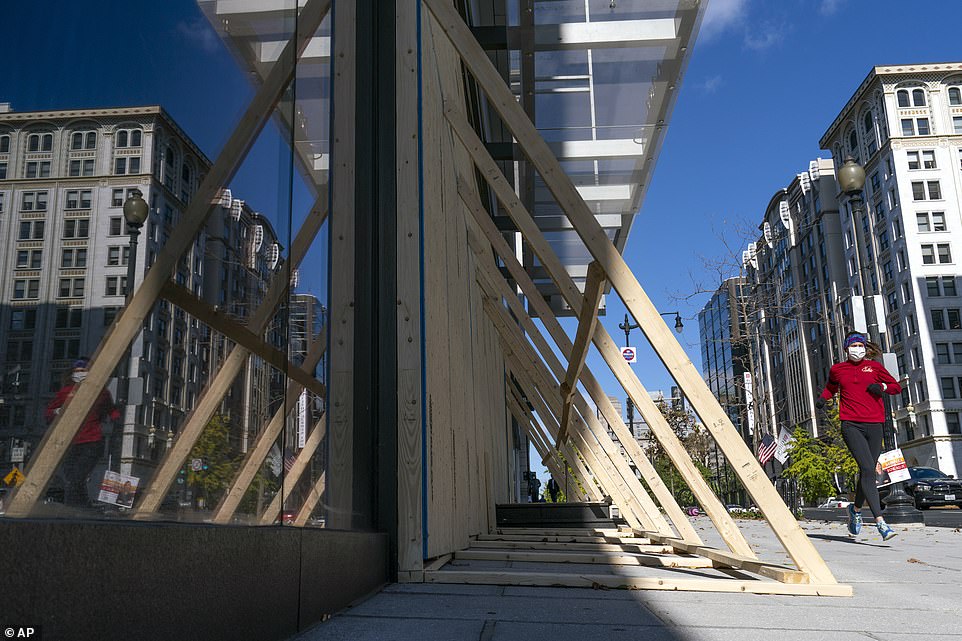 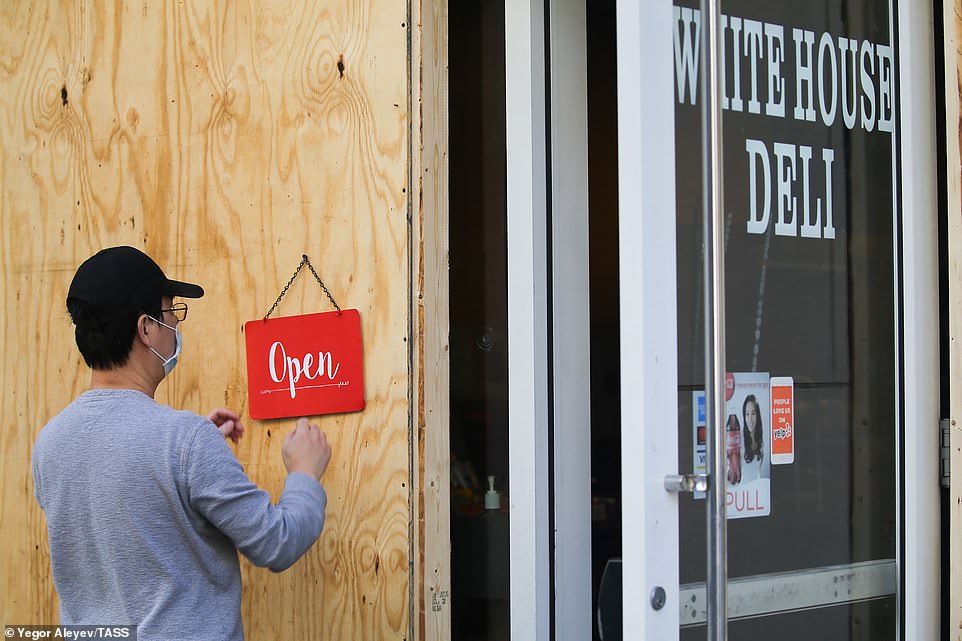 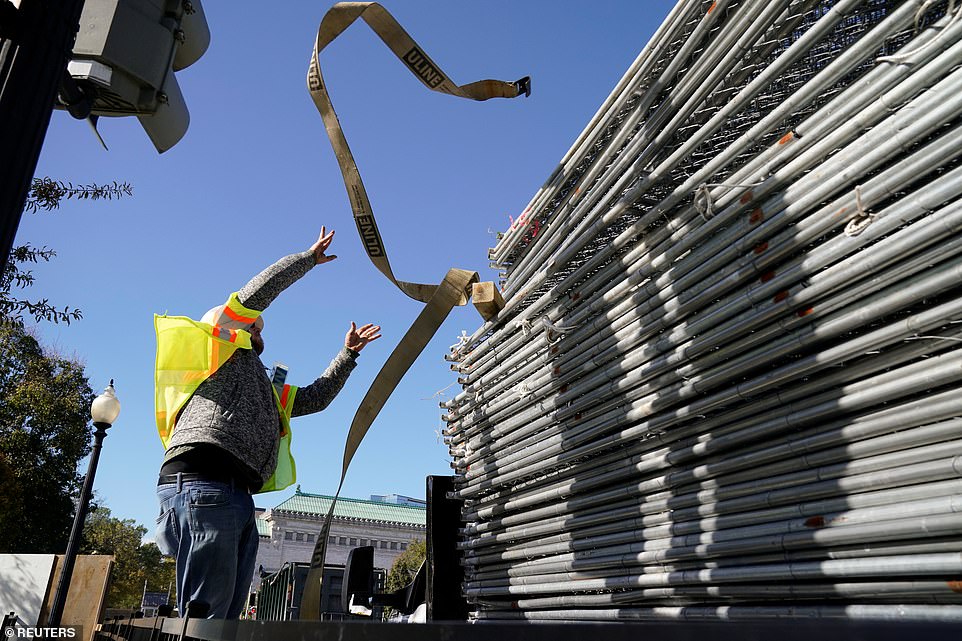 A workers works on a stack of fencing near a security checkpoint on the South side of the White House, the day before the U.S. presidential election, in Washington

Mayor Muriel Bowser said: ‘Some people would like to cause mayhem and trouble. We are preparing to ensure the city´s safety.’

In Kenosha, Wisconsin, there are fears of similar riots to those seen earlier this year. During those riots, 17-year-old Kyle Rittenhouse, a teenage vigilante, shot and killed two BLM protesters. He is now facing murder charges but his arrest has become a flashpoint in national divide. Many believe he is a patriot who was defending the town from looters.

“I´m always going to be concerned about violence, but at this point it´s all speculation,’  Andy Berg, a member of the Kenosha County board of supervisors said.

‘They came in and their intention was to intimidate, to scare and create confrontation. And they did exactly that,” Beth said in an October interview with the Wisconsin radio station WTMJ.

‘And we had a 17-year-old who shouldn´t have been carrying an assault rifle through the streets of Kenosha … I couldn’t have asked for a worse ending to that Tuesday night,’ he said. 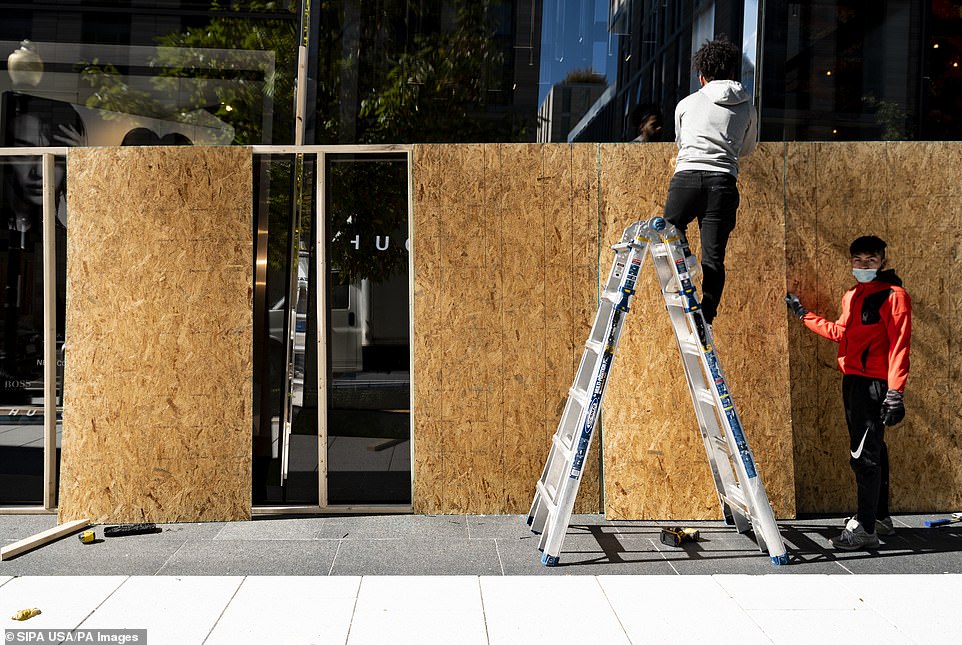 Workers board up the windows of the Hugo Boss store at City Center DC in Washington on Monday, Nov. 2, 2020 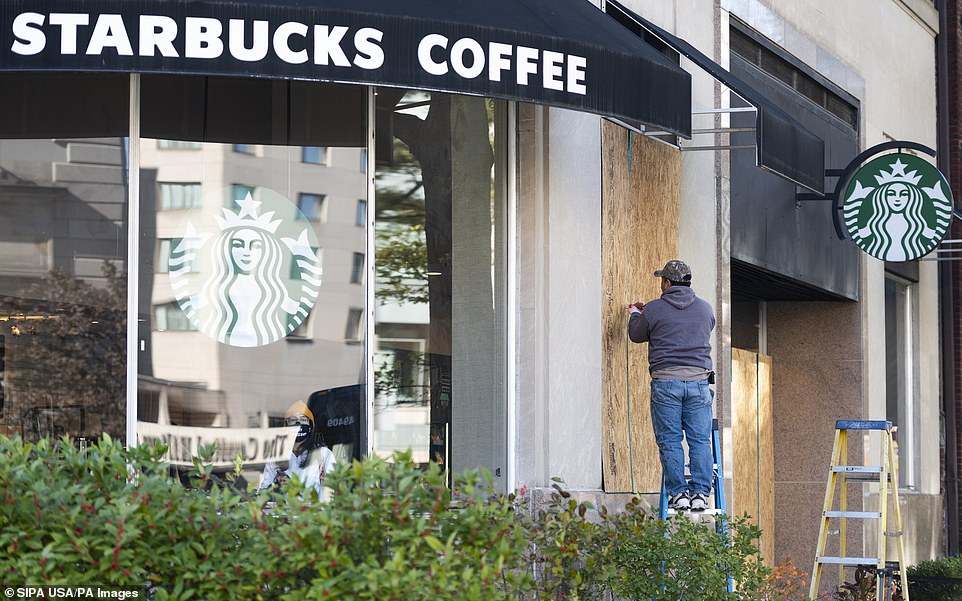