A primary school has been forced to close for two weeks after a member of the ‘external catering team’ tested positive for coronavirus.

Staff and parents at Epsom Primary School in Surrey were warned about the positive test and were advised to go into self isolation for two weeks.

Public Health England said anyone who had school dinners should go into self isolation as a precaution. 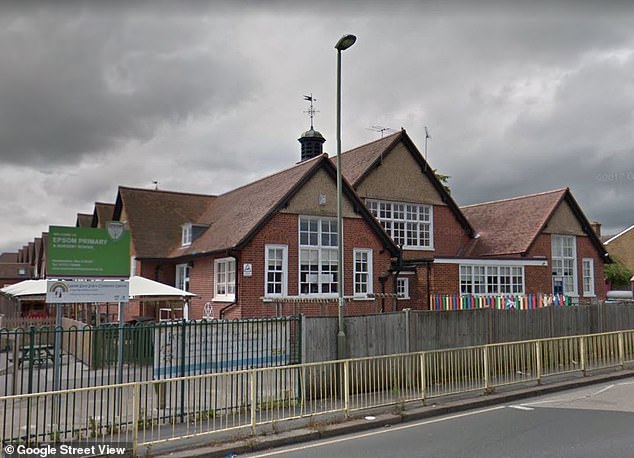 Epsom Primary School in Surrey, pictured, was forced to close for two weeks after a member of the external catering team tested positive for Covid-19

The school was forced to close less than two weeks after Reception, Year 1 and Year 6 students have been returning to the classroom.

For those who are not key worker children or vulnerable children, it would have been the first time since lockdown.

Head teacher Michelle Pollard said: ‘As head teacher, I am disappointed for our families that we have had to take these measures at a time when some normality was returning for our children.

‘However, I have a duty to mitigate any known risk, however low, to our children or our staff. We would all rather be in school this week, but after seeking advice from Public Health England, it was recommended that children self-isolate as a precaution.

‘Although the positive COVID-19 test was not a member of school staff, we have to put our children’s safety first and minimise the possibility of a local outbreak in our community.’

Parents were reassured by the school that the risk of infection was ‘low’.

The Prime Minister criticised councils, highlighting Labour-run authorities, for not opening their doors to reception, year one and year six pupils and suggested Sir Keir should press them to do so.

More than 1,500 paediatricians have called on the Prime Minister to make the opening of schools a priority or ‘risk scarring the life chances of a generation of young people’.

The doctors have signed a letter from the Royal College of Paediatrics and Child Health (RCPCH) asking for authorities in England and Northern Ireland to follow Wales and Scotland and lay out detailed plans for getting children back in to the classroom.

The note suggests that children have generally been spared the worst health impacts of coronavirus but are still at risk of the social consequences.

It reads: ‘The brunt of the impact of Covid-19 is and will continue to be borne by children and families who have the fewest resources and need the most support.’

The letter also raises concerns about children losing the ‘vital point of contact for public health services, safeguarding and other initiatives’.

It concludes: ‘Without such action, the effects of Covid-19 will linger far beyond the pandemic itself and will limit the life chances of children and young people for years to come.’

The letter received more than 500 signatures within an hour of being sent to 11,500 RCPCH members on Tuesday afternoon, which President Professor Russell Viner believes ‘shows the very real concern paediatricians have for the mental and physical health of children who have now missed many months of education’.

The doctors’ plea comes after it was suggested private schools may offer some of their space for catch-up sessions this summer.

The Independent Schools’ Council which represents more than 1,300 private schools, has written to the Education Secretary to offer their support in hosting courses in August to help ‘close the disadvantage gap’.

The letter to Gavin Williamson said: ‘If a national scheme can be organised and catch-up courses can be delivered regionally, independent schools will willingly support extra tuition provision in whatever practical ways they can: providing classrooms, catering and other staffing as far as they are able.’