Prince Harry called for vaccines to be “distributed to everyone everywhere” while Jennifer Lopez embraced her fully-vaccinated mother on stage at a star-studded charity concert in Los Angeles on Sunday night.

Addressing thousands of guests at the SoFi Stadium in Los Angeles, the Duke of Sussex praised the efforts of frontline workers during the pandemic.

“Tonight is a celebration of each of you here, the vaccinated frontline workers in the audience and the millions of frontline heroes around the world,” he told the audience. 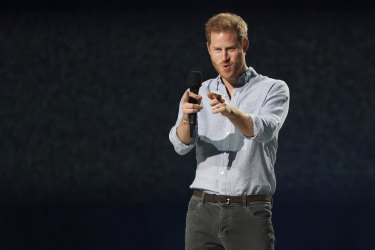 Prince Harry, Duke of Sussex, speaks at “Vax Live: The Concert to Reunite the World” in Los Angeles.Credit:

Everyone in the audience was fully vaccinated. Media and production staff needed to show a negative COVID test before entering the stadium.

“The vaccines are safe. I promise you. They work,” said US President Joe Biden, who was accompanied in a video message with first lady Jill Biden. Both appeared as part of the “We Can Do This” initiative to increase confidence in COVID-19 vaccines. 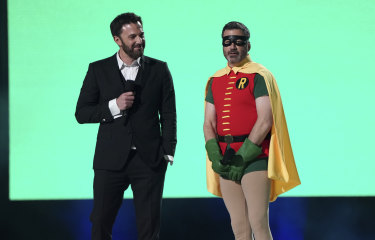 Ben Affleck and Jimmy Kimmel were among the celebrities at the star-studded event.Credit:

“We’re working with leaders around the world to share more vaccines and boost production to make sure every country has the vaccines they need,” the president continued. “If we get this done, we won’t have to miss another moment.”

The event was part of a growing chorus seeking wider, more equitable distribution of COVID-19 vaccines.

Prince Harry said providing vaccines across the globe was imperative, particularly for those in the poorest countries. He said that he was standing in solidarity with India, who is experiencing a “devastating” second wave of the virus.

“The vaccine must be distributed to everyone everywhere,” he said. He along with his wife Meghan, who was not at the concert, are leading an effort to raise money for the vaccine-sharing program COVAX.

“We cannot rest or truly recover until there is fair distribution to every corner of the world,” he said. “The virus does not respect borders and access to the vaccine cannot be determined by geography.”

“Many of us had to stay home, but you all didn’t have a choice,” the singer said. “You set an example for all of us, both in how you stayed on the job and that we need to get vaccinated as soon as possible.”