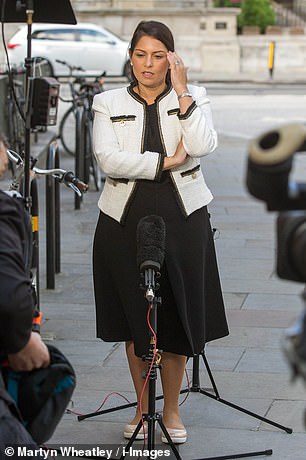 Priti Patel reignited her war of words with ethnic minority  Labour MPs today as she branded them ‘racist’ for accusing her of ‘gaslighting’ black people.

She used an appearance on Sky’s Sophy Ridge on Sunday to hit out again at a group of black, Asian and minority ethnic (BAME) Labour MPs.

Last month they accused the Home Secretary of using her Indian heritage to cast doubt on black communities’ experience of racism in the UK.

The Cabinet minister had previously told the 33 MPs who wrote to her that she would ‘not be silenced’ by those suggesting she had used her own experiences of prejudice to undermine the ‘very real racism’ faced by black people.

Ms Patel, asked on Sky News’ Sophy Ridge On Sunday programme whether her rivals had an issue with her, said she thought they did.

‘I think clearly in the case of those Labour MPs, they simply do primarily because they clearly take the stance or the position that I don’t conform to their preconceived idea or stereotypical view of what an ethnic minority woman should stand for and represent,’ she said.

‘In my view, that in itself is racist.

‘It is very disappointing and I have made it quite clear I’m not going to dignify that letter any further.’ 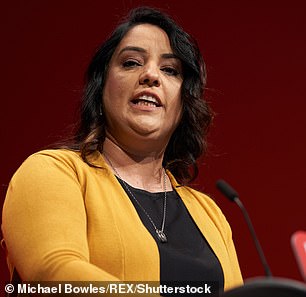 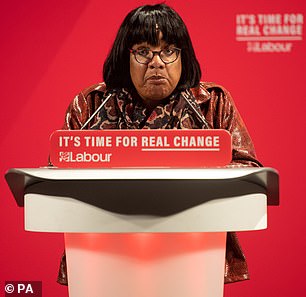 Shadow minister Naz Shah (left) and other Labour MPs, including Diane Abbott (right), Tan Dhesi and Rosena Allin-Khan, were among those to question Ms Patel’s attitude towards the Black Lives Matter protests. 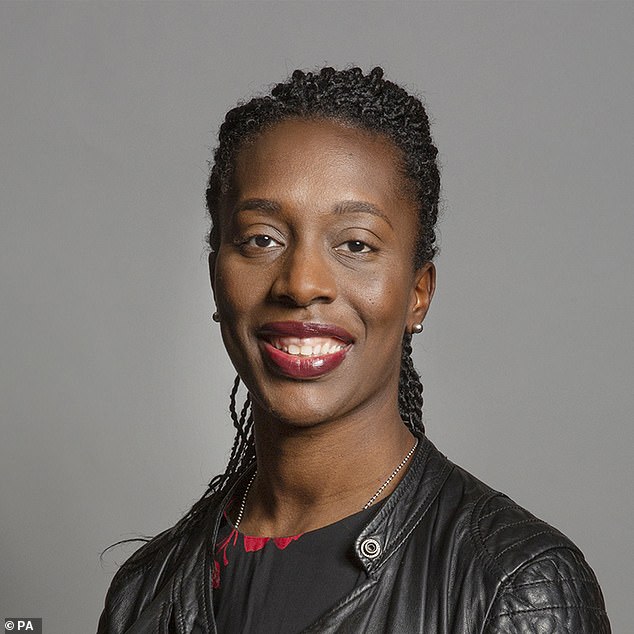 Gaslighting refers to the act of psychologically manipulating someone to doubt their own experiences.

Shadow minister Naz Shah and other Labour MPs, including Diane Abbott, Tan Dhesi and Rosena Allin-Khan, were among those to question Ms Patel’s attitude towards the Black Lives Matter protests.

They said: ‘We write to you as black, Asian and ethnic minority Labour MPs to highlight our dismay at the way you used your heritage and experiences of racism to gaslight the very real racism faced by black people and communities across the UK.

‘Being a person of colour does not automatically make you an authority on all forms of racism.’

The letter came after the former international development secretary had responded to calls for her to ‘act now’ on racism in the wake of the police killing of George Floyd in Minneapolis, US, by detailing her own experience of prejudice.

Ms Patel, replying to comments made by Labour MP Florence Eshalomi in the Commons, replied: ‘Well, on that basis, it must have been a very different Home Secretary who as a child was frequently called a P*** in the playground, a very different Home Secretary who was racially abused in the streets or even advised to drop her surname and use her husband’s in order to advance her career.

‘So, when it comes to racism, sexism, tolerance for social justice, I will not take lectures from the other side of the House.’

During interviews with broadcasters on Sunday, Ms Patel called on those involved with the Black Lives Matter movement to avoid gathering for further protests, warning it risked a second wave of coronavirus.

Ms Patel told Sophy Ridge: ‘When it comes to protests, there are other ways people can express their views and opinions.

‘With Black Lives Matter, there are legitimate voices, legitimate causes, legitimate issues that were being aired at the time … but protesting right now will not help us get control of this awful disease, this horrible virus and stop the spread of it.’