Keenan Mundine can still smell the prison cell he was locked up in when he was 14 after breaking into a car to steal a laptop.

“My first night in that cell was the loneliest of my life,” the Biripi and Waka Waka man told the United Nations in Geneva in 2018, almost two decades after he was first incarcerated in a youth detention centre.

“Right now, children as young as 10 are being locked away in prison cells across Australia.” 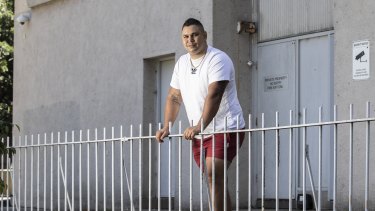 Keenan Mundine is a passionate advocate for Australia to raise the age of criminal responsibility from 10 to 14.Credit:Louie Douvis

Mr Mundine, who had spent half his life in prison by the time he addressed the United Nations, has become a passionate advocate for Australia to raise the age of criminal responsibility from 10 to 14 years in line with most European nations.

In Australia children as young as 10 can be held criminally responsible for their actions, which means they can be arrested by police, remanded in custody, convicted by the courts and jailed.

“It traumatised and broke me,” says Mr Mundine, who estimates he entered and exited the youth justice system 50 times between the ages of 14 and 18. He now runs Deadly Connections, which aims to break the cycle of disadvantage facing many Indigenous Australians.

After Mr Mundine’s parents died, before he was seven, he was separated from his siblings and sent to stay with family members. By 14 he was living on the streets of Redfern, breaking into cars and stealing laptops, mobile phones, handbags and wallets.

“I was so young. And then, you know, having these things written about me by the police in the court, and all of that combined really, really made me feel like a second-class citizen. And like, that's where I belong, because I'm no good.”

Andrew Walter, an assistant secretary from the Attorney-General’s Department, told the UN on Wednesday night it would be up to each jurisdiction in Australia to decide whether to raise the minimum age.

“Two Australian jurisdictions, the Northern Territory and the Australian Capital Territory, have expressed an intention to do so; however, this has not yet occurred.”

Mr Walter said that while Indigenous Australians comprised only 6 per cent of young people aged between 10 and 17, they made up approximately 57 per cent of those of in youth detention.

“This proportion rises to 78 per cent for young people between the ages of 10 and 13,” Mr Walter said.

In 2018 the attorneys-general in each jurisdiction in Australia agreed to review whether to raise the age of criminal responsibility.

Mr Walter said in July last year the attorneys-general asked the working group to conduct further work regarding the adequacy of processes and services for children who exhibit offending behaviour.

“A key concern is to ensure there are appropriate supports for young people and their families to prevent ongoing offending behaviour and to keep the community safe,” he said.

Federal Attorney-General Christian Porter said the issue was primarily a matter for the states and territories as there were currently no children under the age of 14 serving a custodial sentence for Commonwealth offences.

“I personally have not been an enthusiast for lifting the age, based on current evidence. Currently, children aged 10 to 14 can only be found criminally responsible where the prosecution can prove that they knew their conduct was wrong,” Mr Porter said.

“This sets a particularly high bar that prosecutors must clear before a case can proceed.”

A Victorian government spokesperson said the best outcome for young people was to avoid contact with the justice system in the first place.

“[This] is why tackling the root causes of youth offending is our first priority.”

The spokesperson said the Victorian government had committed $11.8 million in the Victorian budget to address the over-representation of young Aboriginal and Torres Strait Island people in custody.

NSW Attorney-General Mark Speakman said any reform in this area would need to be in the best interests of the NSW community, with the safety of the community a key consideration.

Organisations including the Law Council of Australia, the Royal Australasian College of Physicians and Aboriginal-led justice coalition Change the Record have repeatedly lobbied for the age of criminal responsibility to be raised to 14.

They argue Indigenous children are disproportionately affected, the brain development of children under 14 means they do not understand the consequences of their actions and detaining young children is likely to entrench criminality.

“These are some of the most vulnerable children in society – who have frequently experienced issues such as parental incarceration, homelessness, neglect and poor health,” said Law Council president Dr Jacoba Brasch, QC.

“The Law Council is not discounting that there are some legitimate concerns held amongst some parts of the community about community safety and juvenile crime. However, children aged 10-14 are statistically very unlikely to commit serious crimes such as homicide.”

Chris Cunneen, a professor of criminology from the University of Technology Sydney, said Australia could draw on the experience of European jurisdictions, where welfare agencies focused on the wellbeing and safe development of children instead of police, courts and punishment.