Russia issued a new nuclear threat to the West today by ostentatiously readying a Yars strategic missile for combat use at a location southwest of Moscow.

A video shows the installation of the huge rocket into a silo at the Kozelsk military compound in Russia’s western Kaluga region. The missile is capable of striking targets in the United States and Britain.

President Vladimir Putin was seen in late October overseeing the launch of a similar Yars nuclear missile on a mock attack on the West amid high tension over his February 24 invasion of Ukraine and fears he could resort to a nuclear strike.

Russia, whose nuclear sabre-rattling has been a constant tactic since the invasion began as a means to intimidate the west, is building up to more nuclear showboating as it marks the annual Strategic Missile Forces Day on December 17. 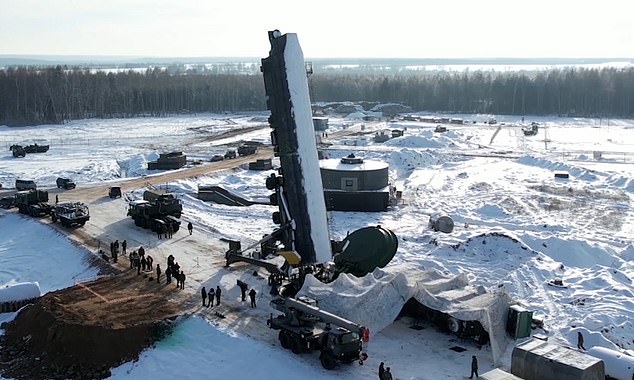 The Yars intercontinental ballistic missile with a 7,500 mile range was installed in a silo launch pad using a special transport and loading unit.

Division commander Col. Alexei Sokolov made clear the exercise was aimed at sending a message to the West, with both the UK and US within range.

‘The importance of this operation lies in the fact that the next missile will be put on combat duty on schedule,’ he said.

‘The homeland will get another nuclear missile weapon, which will make it possible to solve any tasks at the strategic level.’ 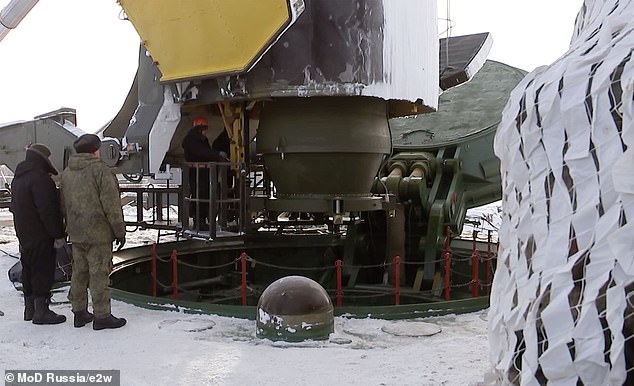 Pictured: Footage from Russia shows the Yars missile being loaded into a silo on Wednesday 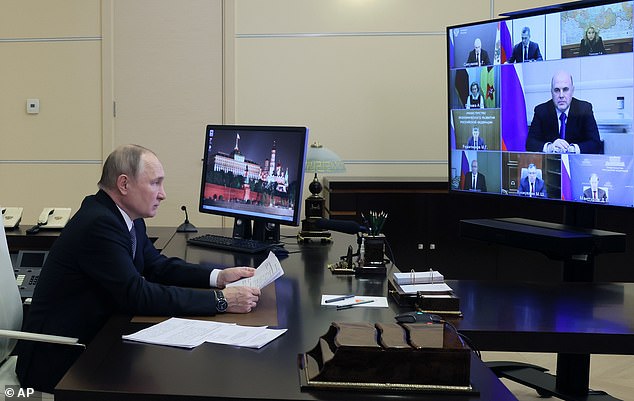 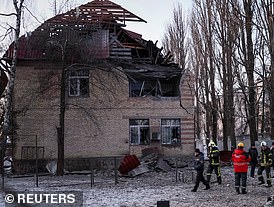 Combat engineer Vadim Vyazovsky told TV Zvezda, the Russian defence ministry’s own channel: ‘I feel proud of Russia that my country is putting such products into service so that the Motherland can sleep well.’

The Kozelsk missile is undergoing modernisation and a revamp, said reports.

The Yars is a modification of the Topol-M missile system, and was first deployed in 2009. In the October drill, Russia allegedly practiced its response to a Western nuclear attack.

Russian state TV said the Putin drills were aimed at targeting the UK and US.

The footage showed the huge missile being transported on a lorry through a snowy forest, escorted by Russian military vehicles, before arriving at the silo in the middle of a snow-covered field.

The missile was then shown in a time-lapse being lifted up by the lorry’s detachable lifting mechanism to a 90-degree angle, so that it was over the top of the silo and ready to be lowered in.

The base of the missile is then seen appearing from the bottom of the lorry’s container, before it slowly descends into the hole the hole in the ground. 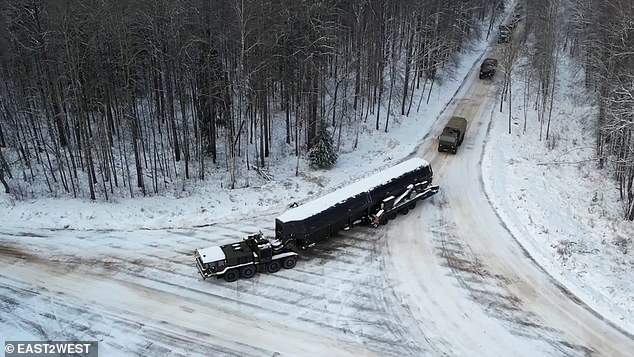 The missile was transported on a huge lorry, that doubled as the silo loading mechanism 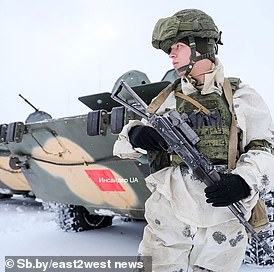 Release of the footage came after US intelligence claimed that Putin could seek to help Iran develop its nuclear weapons programme in exchange for Tehran’s continued support of his war in Ukraine.

Weapons supplied by the Islamic republic have been used by the Russian military in the conflict – particularly Iranian-manufactured Shahed-136 ‘suicide drones’ which are playing a central role in attacks on civilian populations and energy network.

This ‘sordid’ alliance yesterday led British foreign secretary James Cleverly to announce a sanctions package targeting ‘high-level’ figures from both countries as he condemned the embattled Iranian regime for making deals with Russia in ‘a desperate attempt to survive’.

But a former US intelligence terrorism expert on Tuesday claimed that financial payments alone may not provide enough of an incentive to Tehran to continue providing military assistance in the face of stiff sanctions.

At least ten of the Shahed-136 drones were shot down by Kyiv’s air defences early Wednesday, mayor Vitali Klitschko said, after being fired at the central Shevchenkivskyi district.

Drone fragments struck two administrative buildings in the city centre, emergency services said, while one picture showed a house with the upper floors blown away.

There has been no report yet of casualties. It is also unclear what exactly the drones were targeting and if any of them made it through, but they were likely to be aimed at the city’s electricity, water and heating network.