Follow MailOnline’s liveblog for updates today after Her Majesty The Queen died aged 96 at Balmoral yesterday, and the nation begins a period of mourning:

He told Times Radio: ‘All, most of us, our generation, we have grown up with the Queen as our head of state.

‘And as the sort of absolute guarantor, in my view, of our stability – through hard times, through bad times, through thick and thin, the Queen was always there, wonderfully reassuring, calm, I think, sage figure, fortified and sustained, obviously by a profound faith.

‘So my feeling is one of desperate sadness. I really am so sad for her family, and I think it’s also worth remembering that the King has lost his father only quite recently, and now loses his mother. And for all the royal family, this is on every account, a very, very bad day indeed.’

The London Stock Exchange said it will open and trade as normal today following the Queen’s death.

The Exchange confirmed trading will also ‘close at the normal times’ this afternoon.

Trading will continue at the usual times during the national mourning, which is expected to continue for roughly 12 days.

The Exchange did say, however, it will close if a public or bank holiday is announced for England and Wales.

The Dalai Lama has expressed his ‘deep sadness’ over the death of the Queen in a letter to King Charles III.

‘I remember seeing photographs of her coronation in magazines when I was young in Tibet,’ he told the King.

‘Her reign, as Britain’s longest-serving monarch, represented celebration, inspiration and a reassuring sense of continuity for so many people alive today.

‘Your mother lived a meaningful life with dignity, grace, a strong sense of service and a warm heart, qualities we all should treasure.’

It is with deep sadness that I have learned this morning that Queen Elizabeth II, has passed away. I pray for her and offer heartfelt condolences to His Majesty Charles III, the Royal Family and the people of the United Kingdom. https://t.co/FgSoWtutcq

Audience with the PM – Despite his grief, duty calls for new sovereign Charles who will have his first audience as monarch with Prime Minister Liz Truss.

Confirming funeral plans – Charles is likely to meet the Earl Marshal – the Duke of Norfolk – who is in charge of the accession and the Queen’s funeral, to approve the carefully choreographed schedule for the coming days.

Court mourning – Charles will decide on the length of court or royal mourning for members of the royal family and royal households. It is expected to last a month.

National mourning – The Government will confirm the length of national mourning, which is likely to be around 12 days, from now up to the day after the Queen’s funeral.

Flags – Union flags on royal buildings are flying at half-mast.

Gun salutes – One round for every year of the Queen’s life – will be fired in Hyde Park and at other stations.

The new King will be formally proclaimed monarch at a historic Accession Council tomorrow.

Charles has automatically become King on the death of his mother, but an Accession Council is usually convened at St James’s Palace in London within 24 hours of the death of a sovereign.

It will be later following the death of the Queen because the announcement of her death did not come until early evening yesterday, meaning there was not enough time to set the plans in motion for this morning.

Buckingham Palace said in a statement at 6.30pm yesterday: ‘The Queen died peacefully at Balmoral this afternoon.

‘The King and The Queen Consort will remain at Balmoral this evening and will return to London tomorrow.’

The BBC has announced that the Last Night Of The Proms has been cancelled as a mark of respect, following the death of the Queen.

The conclusion of the eight-week summer season of daily orchestral classical music concerts, which takes place predominantly in the Royal Albert Hall in central London, was due to conclude on Saturday September 10.

But following the historic news yesterday, the organisation announced that the final two nights of concerts today and tomorrow would no longer go ahead:

Following the very sad news of the death of Her Majesty The Queen, as a mark of respect we will not be going ahead with Prom 71 on Friday 9 September, or the Last Night of the Proms on Saturday 10 September.

People have gathered at the gates of Buckingham Palace, Balmoral and Windsor Castle to pay tribute to The Queen since her death was announced. Here is a video clip of some of the mourners in London today:

The official website of the royal family has been updated following the death of the Queen, with Charles now listed as His Majesty The King.

Charles automatically succeeded his mother as the nation’s monarch upon her passing, but he will not be formally proclaimed King until an Accession Council is held at St James’s Palace in London tomorrow.

However royal.uk already lists Charles as King, with his wife Camilla officially listed as Queen Consort.

The website’s home page has also been updated with a list of feature articles dedicated to the Queen’s life and reign.

Police are starting to let members of the public stand at the gates of Balmoral Castle to pay their respects to the Queen.

Several people walked to the entrance of the grounds of the Scottish royal retreat from 6.30am today to lay bouquets of flowers as a tribute to the late monarch.

One woman was spotted lighting a candle while others were seen reading personal notes written on the flowers.

The area was blocked off for a period last night when members of the royal family arrived at the castle as news broke of the Queen dying. 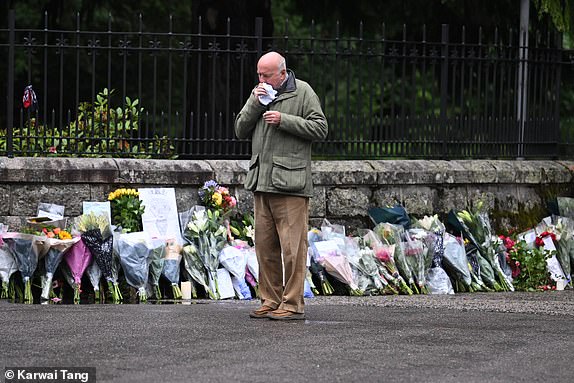 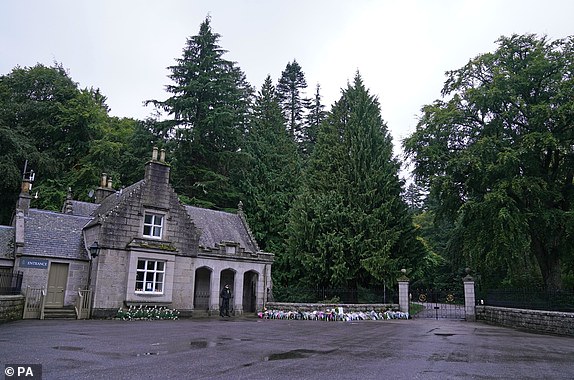 The death of the Queen has sparked an outpouring of grief and tributes from the nation’s papers.

The Times carries a striking image of the Queen at her coronation on June 2, 1953 – a picture which several papers deemed the perfect background to their tributes.

The Guardian opts to let the Queen’s coronation image stand alone, bar some simple text on the left-hand side which reads: ‘Queen Elizabeth II 1926 – 2022’.

And the Daily Mail mourns the Queen’s death with the headline: ‘Our hearts are broken.’ 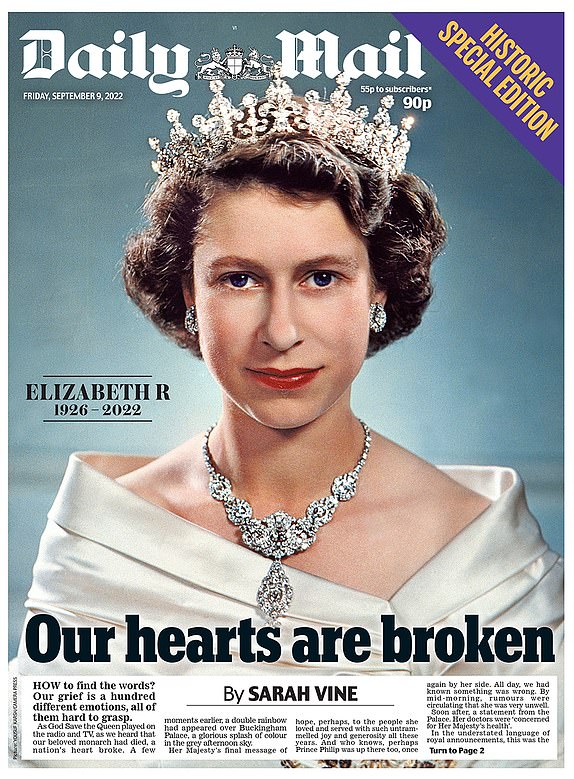 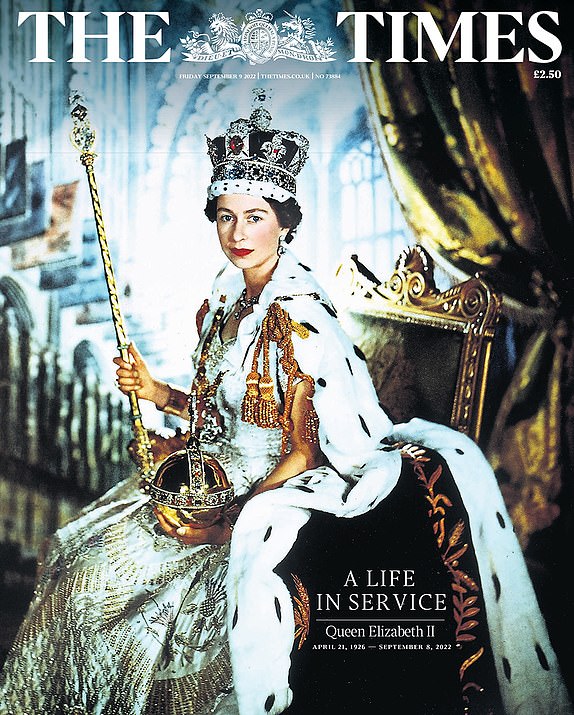 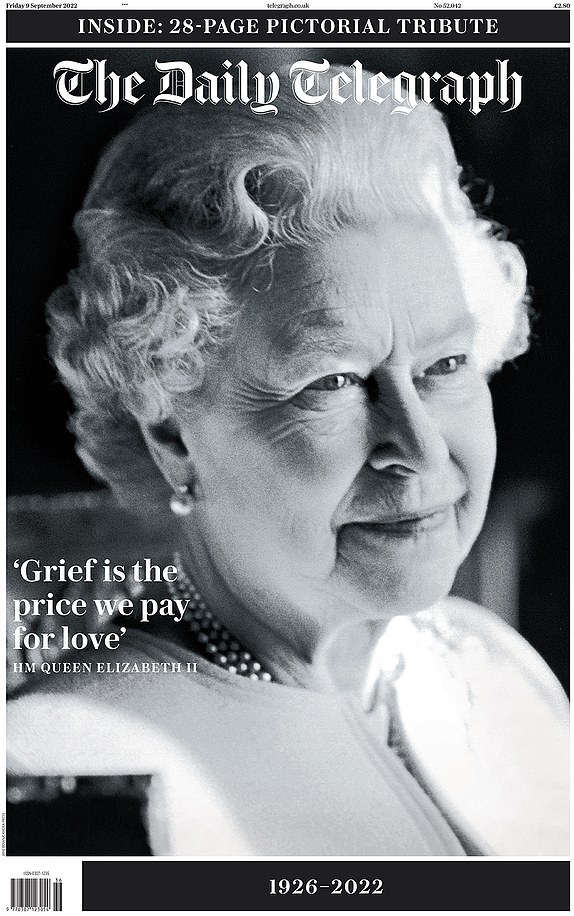 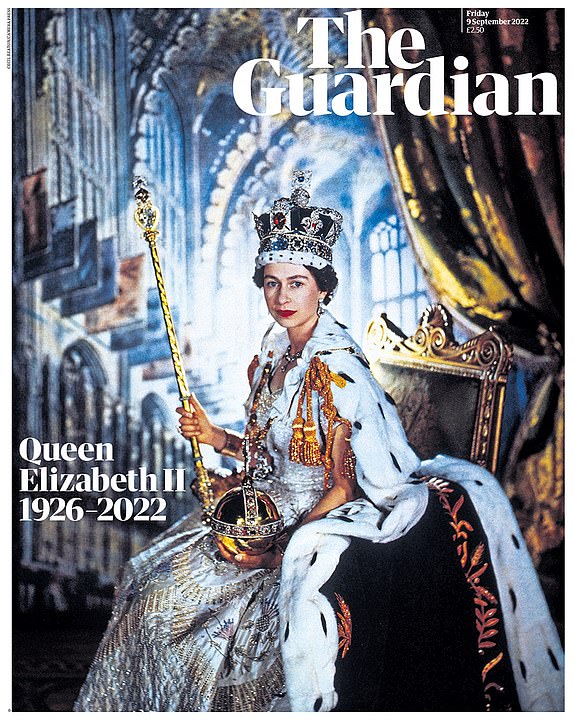 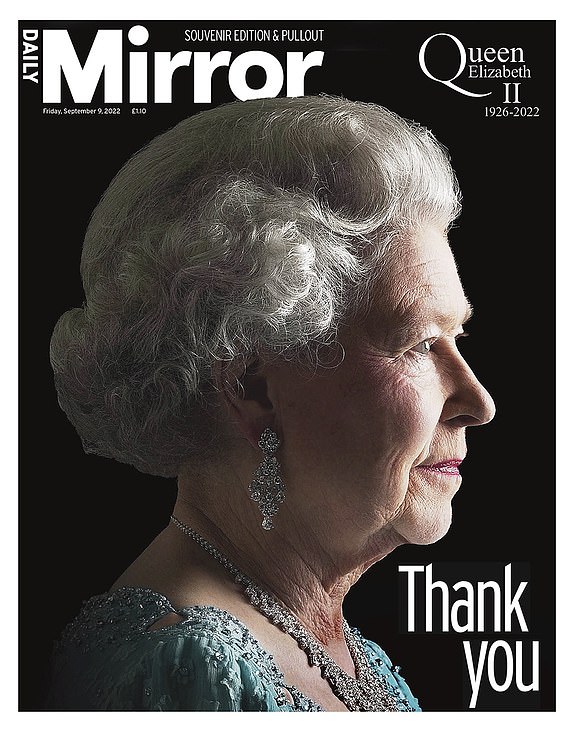 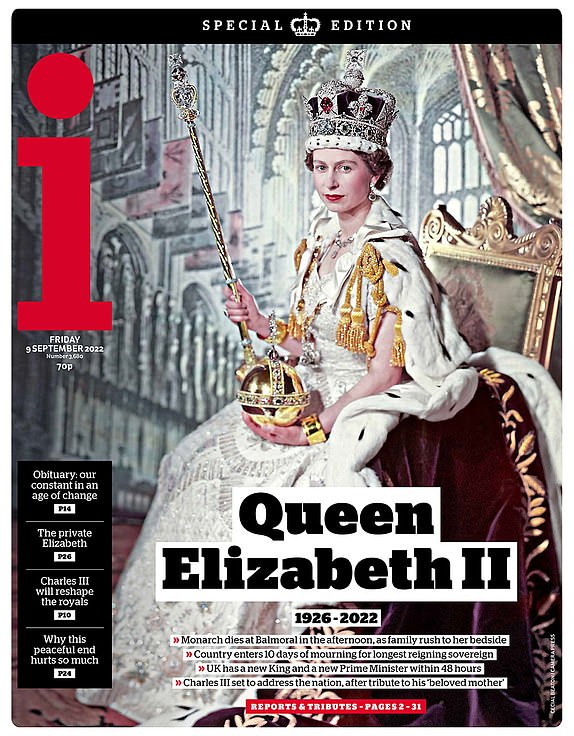 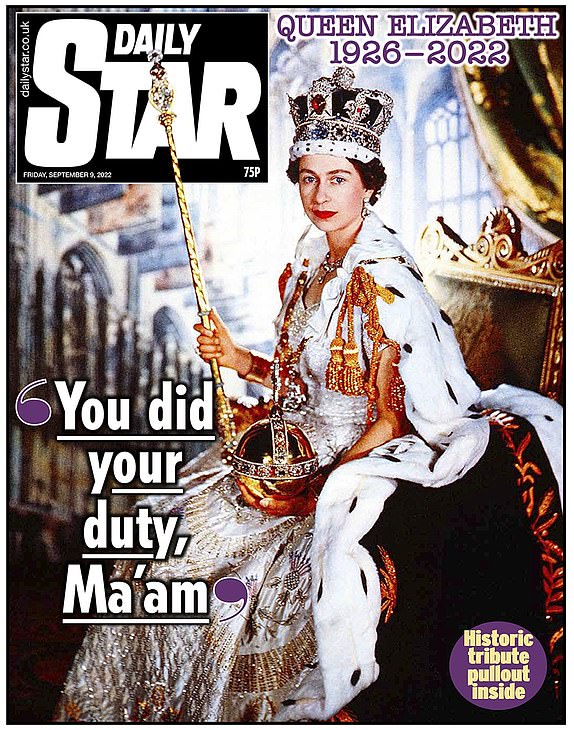 Good morning and welcome to MailOnline’s liveblog on this sombre day as the nation begins a period of mourning to mark the death of Her Majesty The Queen.

Elizabeth II’s son and successor King Charles III spoke of his grief soon after Buckingham Palace announced the death of the 96-year-old monarch, who died ‘peacefully’ yesterday afternoon at Balmoral.

Charles will now turn his mind to matters of state as he begins his first full day as the nation’s new monarch having spent much of his 73 years in preparation for the role.

As tributes continue to flood in from around the globe, follow our liveblog today for updates.