Two reputed MS-13 gang members were sentenced to life in prison without the possibility of parole Thursday in connection with a brutal 2019 murder north of Baltimore.

On Tuesday, a jury convicted defendants Hugo Chavez, 33, and Jonathan Hernandez, 21, on charges of first-degree premeditated murder and conspiracy to commit first-degree murder in the July 31 killing of 21-year-old Daniel Alvarado Cuellar.

Cuellar was found lying dead outside an apartment complex in the Parkville-Towson area, according to FOX 45 of Baltimore. An autopsy revealed Cuellar had been stabbed roughly 40 times in the head, neck, and torso with a knife and machete. 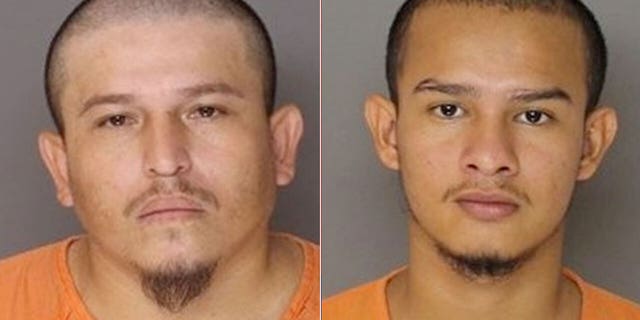 Hugo Chavez, 33, and Jonathan Hernandez, 21, were sentenced to life in prison without the possibility of parole in connection to the brutal 2019 murder of a man in Maryland. (Baltimore County Police)

“Something as horrific as this act to a good, hard-working young man must be and has been addressed. We must continue to be vigilant in assuring that gang violence will not tolerated and must be eliminated,” Baltimore County State’s Attorney Scott Shellenberger said.

Baltimore County Police learned that Cuellar had been at a laundromat earlier in the night prior to his death. A review of surveillance footage revealed that a large number of individuals were either stalking or watching the victim at the location, Baltimore’s WJZ-TV reported. Detectives were able to identify one of the cars used to watch the victim.

Weeks later, the car was found in Mississippi traveling toward Texas, and investigators were able to connect the people in the vehicle to Cuellar’s murder, reports said.

Police determined that Chavez had directed the victim to be killed and got others to help, according to FOX 45. Cuellar was attacked outside his home and Hernandez was one of three people who stabbed him, the station reported.

Officials added that Chavez believed the victim was a member of a rival gang.

“The type of pain inflicted upon another human being is beyond what one can imagine,” he said, according to FOX 45.