‘Right thing to do’: Big business swings behind Indigenous recognition

Gilbert + Tobin founding partner Danny Gilbert has a simple message on Indigenous recognition and the long-running effort to create an Indigenous Voice to Parliament.

“It’s time,” he said. “As in, what is wrong with this idea that after 240 odd years it is still so difficult as a nation to face into it? It is the right thing to do.” 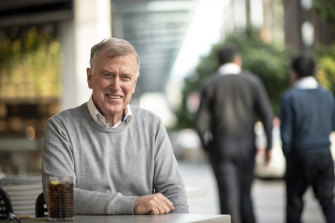 The lawyer is co-chair of the Cape York Partnership and has been recognised with an Order of Australia for his contribution to law and the community and Indigenous Australians. He is now at the forefront of a group of well-heeled business leaders and philanthropists intent on upping the pace of efforts in Canberra to establish a genuinely representative Indigenous Voice to Federal Parliament.

Together with Cape York Partnership founder Noel Pearson and fellow Uluru statement signatories Dean Parkin and filmmaker Rachel Perkins, Gilbert is leading an effort to raise funds for From The Heart – a campaign committed to educating the public on the need for constitutional and legislative change to close the gap and to empower Aboriginal and Torres Strait Islander communities.

Last week, the business leader hosted a fundraiser at his Sydney home in aid of the initiative. Pearson, Parkin and Perkins all spoke at the event as did veteran pollster Mark Textor who is advising on the campaign in his first public initiative in three years.

The group is still in discussions regarding the funds committed, with cash expected to come from corporates and individuals to reach a target of several million dollars. The BHP Foundation committed an initial sum to fund the first 18 months.

The attendees are adamant now is the time to prioritise an Indigenous Voice.

“In three decades of [Australian] politics, I’ve seen government after government claiming to be focused on practical solutions on Aboriginal issues yet failing … Why? Nothing really compels them to truly listen to the actual experts on those issues in front line in communities – you know, the Aboriginal people themselves, rather than the Canberra bureaucratic bubble,” Textor said. 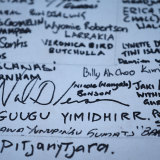 Signatories to the Uluru Statement alongside their nation.Credit:Alex Ellinghausen

“In my view and in the view of nearly two-thirds of the everyday Australians I have polled, only an enshrined Voice to Parliament ensures Voices outside the failed Canberra bubble are heard on Indigenous health, jobs and the rule of law.”

For Gilbert, it’s a two-part strategy. Supporters who gathered last week are prepared to use their business clout to keep the heat on federal policymakers to make sure Indigenous recognition and a Voice to Parliament remain a priority. At the same time, the group is funding a lobbying effort headed by campaign whisperer Textor to ensure the push – and ultimately, a referendum – is successful.

“It’s a public education program,” Gilbert said. “Our aim is to educate Australians about the importance of a Voice … for that to happen we need to get bodies on the ground, we need to get out to communities, we need to employ people, we need articles published, visits to Canberra.”

The result? “It will give our First Nations people greater recognition in the country and importance to the country … it will be practical and will give them a say and about how they live their lives.

Business Council of Australia president Tim Reed agreed. “We support the Uluru statement from the heart as it is foundational to creating the type of opportunities that can deliver real, genuine and lasting change,” he said.

And to the critics who insist businesses and corporate leaders have no place weighing in on social issues, Gilbert is adamant business has no choice. Large corporations are increasingly expected to stand up for important social issues at the peril of losing legitimacy if they don’t.

“People want corporations to be seen to be doing the right thing and to play a role in nationhood … to act in their own economic interests, but those of the nation as well.”

At the same time, a growing chunk of the population is becoming more frustrated and impatient at the glacial pace of improvement in the gap between Indigenous and mainstream living standards and life expectancy. “This is unsolved business in this country,” he said.