Washington: Roger Waters says Mark Zuckerberg asked to use one of Pink Floyd’s most famous songs to promote Instagram. Waters’ response to the man he calls “one of the most powerful idiots in the world”? “No f—ing way!”

At a recent New York City event at the People’s Forum to advocate for the release of Julian Assange — the WikiLeaks founder imprisoned in London — Waters produced a printed page of a message he said he had received “on the internet” that morning. 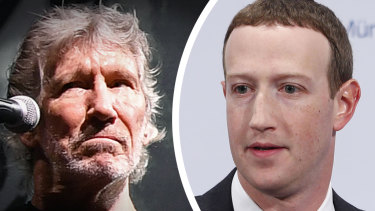 In a video shared on Twitter, the 77-year-old former frontman and main songwriter for Pink Floyd said, “It’s a request for the rights to use my song Another Brick in the Wall 2 in the making of a film to promote Instagram.

“So it’s a missive from Mark Zuckerberg to me, right? Arrived this morning with an offer of a huge, huge amount of money. And the answer is ‘F— you!,’” he added as the crowd cheered. “‘No f—ing way!’

“I only mention that because it’s the insidious movement of them to take over absolutely everything. So those of us who do have any power, and I do have a little bit — in terms of the control of the publishing of my songs I do, anyway — so I will not be a party to this bullshit, Zuckerberg.”

Apart from co-founding Pink Floyd and writing or co-writing songs such as Money, Another Brick in the Wall Pt. 2, Comfortably Numb and Wish You Were Here, Waters has been a vocal activist for a number of causes.

His support of a cultural boycott of Israel in response to the Israeli-Palestinian conflict, in particular, has been controversial. He has been vociferously anti-Trump, anti-Brexit and has spoken at rallies for years in support of Assange.

Waters read the rights request from a printed page at the People’s Forum event, held June 10: “‘We want to thank you for considering this project. We feel that the core sentiment of this song is still so prevalent and necessary today, which speaks to how timeless a work …,’

“And yet they want to use it to make Facebook and Instagram even bigger and more powerful than it already is so that it can continue to censor all of us in this room and prevent this story about Julian Assange getting out to the general public so the general public could go, ‘What?! What?’ No. No more.”

Waters, whose concerts have featured Trump’s head attached to a pig’s body, elaborated on his disdain for the Facebook founder, hinting that Zuckerberg’s likeness will feature in his next show.

He asked how someone who famously got his start with a site rating the attractiveness of female college students became so powerful: “And yet here he is, one of the most powerful idiots in the world.” 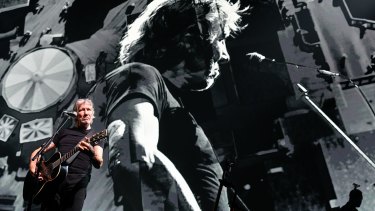 Former member of Pink Floyd, Roger Waters performs during a concert in Zurich, Switzerland, in 2018. Credit:Walter Bieri/Keystone via AP

A Facebook spokeswoman confirmed that Instagram’s marketing team had asked for permission to use the song in a campaign, adding that Zuckerberg had no role in the decision.

Waters does have an official Facebook page (though, as he says, he is banned by former bandmate David Gilmour from posting on Pink Floyd’s Facebook page, with its 30 million followers).

As word got out about Waters’ remarks, he invited “trolls” to challenge him: “Call me a hypocrite for posting this on Zuckerberg’s crappy censored platform.”