The head of RSL Victoria has been stood down in the wake of an investigation into his behaviour following an ‘internal complaint’.

Chief executive Jamie Twidale is now on leave while the RSL’s state leaders consider the results of an investigation into his conduct. 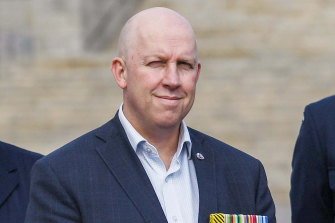 RSL Victoria said in a statement that an independent investigation had been commissioned by the organisation into the conduct of Mr Twidale and any concerns regarding the behaviour of staff was taken seriously.

The organisation said the results of the investigation are now being considered by the Victorian RSL’s executive leadership team, and “additional steps will be taken in accordance with RSL policy and procedures”.

“We take any concerns regarding staff behaviour extremely seriously and ensure proper processes are followed,” the statement said.

“RSL Victoria is committed to providing a safe, supportive and inclusive workplace.

“It would be inappropriate to make further comment while this process is under way.”

Mr Twidale, who started his role at the organisation in December 2019, was previously an emergency operations manager at the Environment Protection Authority, and had also held roles at the State Emergency Service and Emergency Management Victoria.

He completed 22 years of military service with the Royal Australian Engineer Corps, with deployments to Afghanistan, East Timor and the Solomon Islands. Mr Twidale received the Conspicuous Service Medal in the 2006 Australia Day Awards for his dedication to military duty.

Mr Twidale declined to comment when contacted by The Age on Sunday.

Glen Ferrarotto, who is on the state’s executive board, said the investigation into Mr Twidale’s behaviour was based on an “internal complaint”.

“I can say that the CEO has not acted illegally in anyway, it’s an internal complaint,” he told 3AW News. 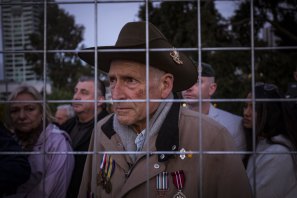 Hundreds of people, including John Murphy, wishing to pay their respects were locked out of the Shrine and the ANZAC Day Dawn Service this year.Credit:Chris Hopkins

RSL Victoria and the Shrine of Remembrance were under fire on Anzac Day this year after the dawn service was capped at 1400 people, leaving dozens of spectators including veterans gathered behind a high wire fence, erected in line with the state’s COVID-19 public event requirements.

At the time, Mr Twidale said he could understand the frustration from veterans around the fence controversy, but with Victoria not being in lockdown and celebrations able to go ahead, it was a “great day”.