Russia releases never-before-seen footage of the Tsar Bomba test – the largest nuclear explosion ever that was 3,333 times more powerful than the blast which destroyed Hiroshima

Russia has released previously-unseen top secret footage of the largest nuclear explosion ever to take place – caused when the country detonated its Tsar Bomba device over the Barents Sea in 1961.

Soviet photographers struggled to capture the scale of the blast caused by the 50 megaton thermonuclear bomb, which exploded with the force of 50million tons of conventional explosives, or 3,333 times the force of the bomb that levelled Hiroshima.

Cameras positioned hundreds of miles from the blast and set up for low-light conditions so as not to be blinded by the flash, captured a fireball rising into the sky for a full 40 seconds before it dissipated into a mushroom cloud.

More footage from an aircraft that was 100 miles from the blast then captured the mushroom cloud rising into the atmosphere. At its peak, the cloud rose 213,000ft into the air – or six times the cruising altitude of a passenger jet. 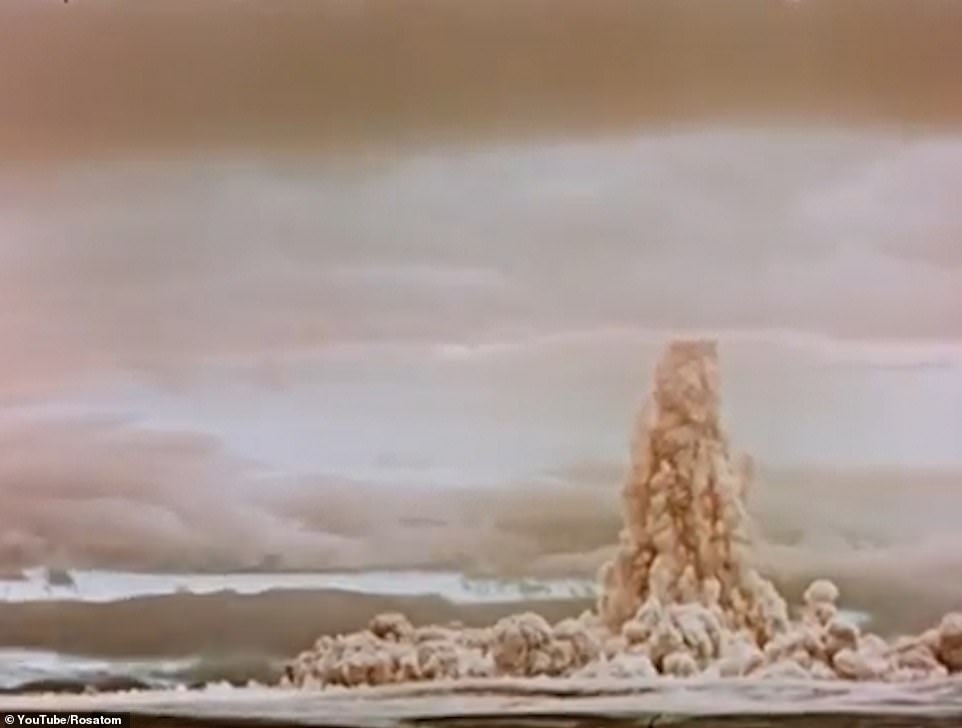 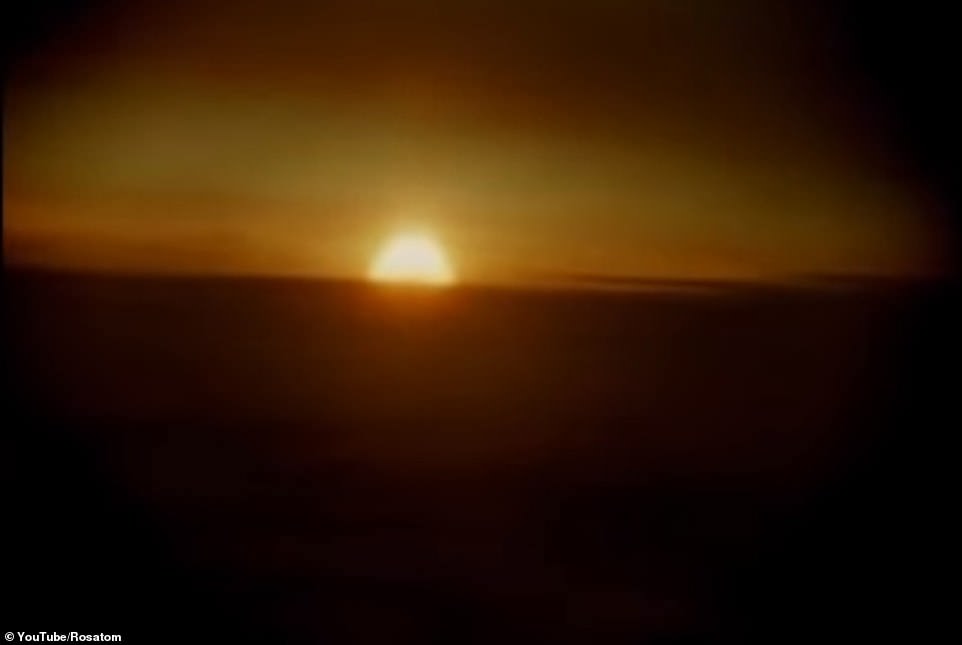 The bomb was detonated 13,000ft above an island in the Arctic Circle, exploding with 3,333 times the power of the bomb that destroyed Hiroshima as Soviet cameramen filmed from hundreds of miles away (pictured, the resulting fireball) 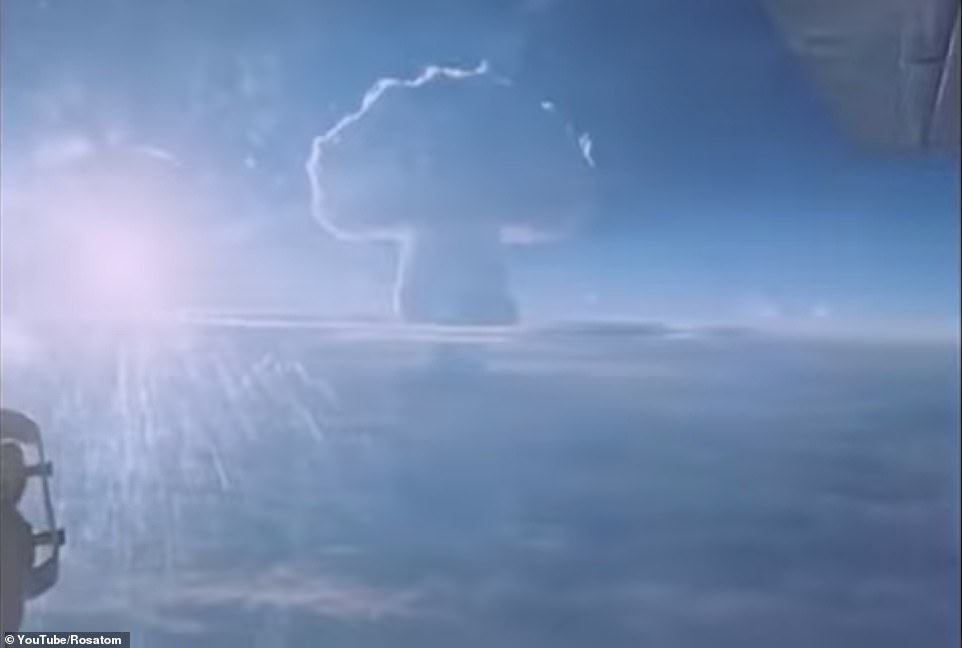 A blinding flash that was seen as far away as Norway gave way to a 40-second fireball and then a mushroom cloud that extended 213,000ft into the atmosphere – six times the height of a passenger plane’s cruising altitude 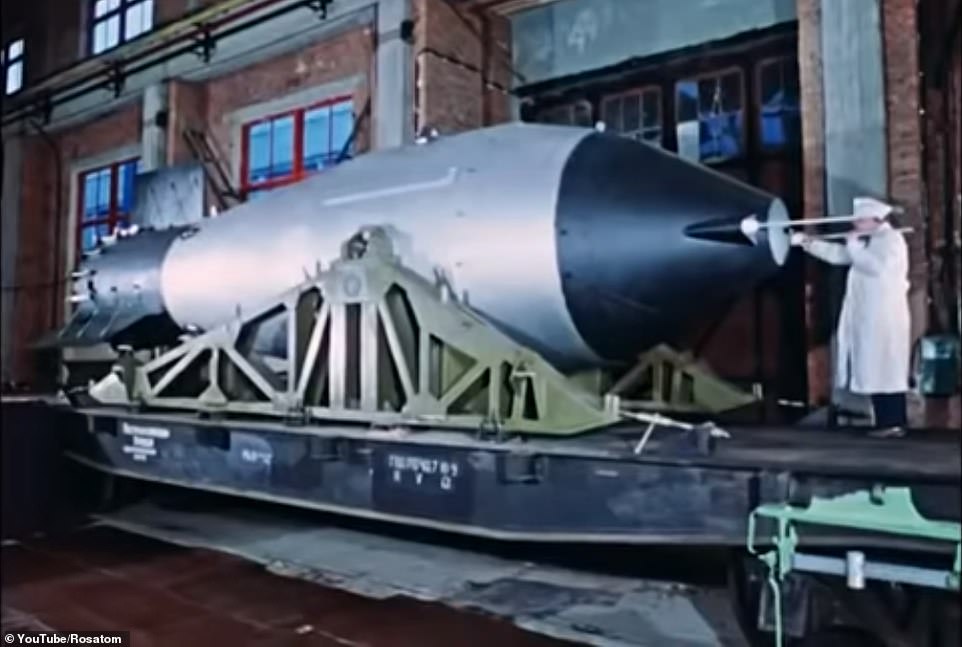 The footage, which has been kept secret by the Kremlin for almost six decades, was released on August 20 by Rosatom, the Russian state nuclear agency, to celebrate the 75th anniversary of the agency’s founding.

The Tsar Bomba, officially designated RDS-220 by the Russian military, was the largest nuclear bomb ever created, and was developed at the height of the Cold War to compete with thermonuclear devices produced by the USA.

In 1954, America had detonated its largest thermonuclear device – designed to be far more powerful than earlier atomic bombs – which was named Castle Bravo and exploded in the Marshall Islands with 15 megatons of force.

The Soviet military quickly set about trying to top it, and by 1961 had constructed a much larger bomb – which would set a record the largest nuclear device ever built.

Placed inside an aircraft bomb case, the nuclear device was taken by train to the Olenya airbase where it was loaded into the belly of a Tu-95 long-range bomber.

On October 30, the bomber flew 600 miles to Severny Island – deep inside the Arctic Circle – where the bomb was dropped while attached to a parachute, giving the aircraft enough time to escape the blast radius.

When the bomb had reached 13,000ft above the ground it was detonated, generating the most powerful man-made explosion in history. 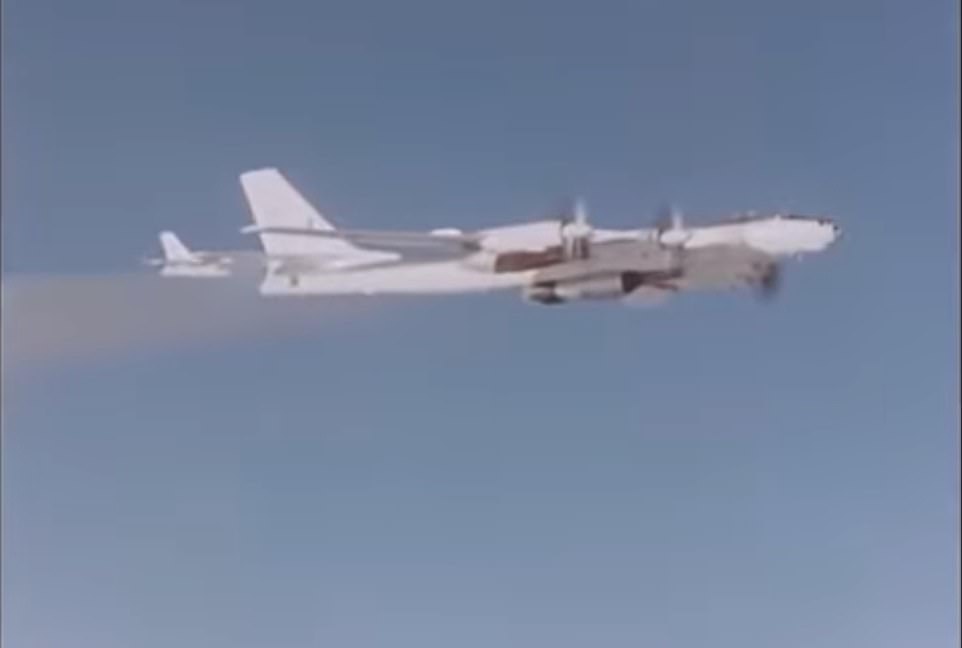 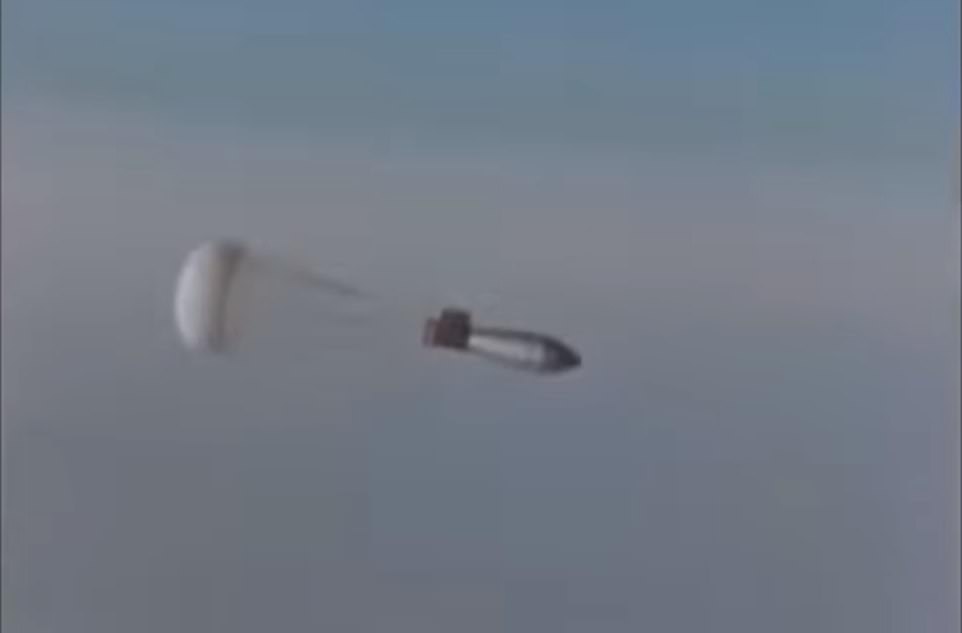 The bomb was attached to a parachute for the drop, slowing its descent so the pilot of the bomber could get outside of the blast radius before the device was detonated 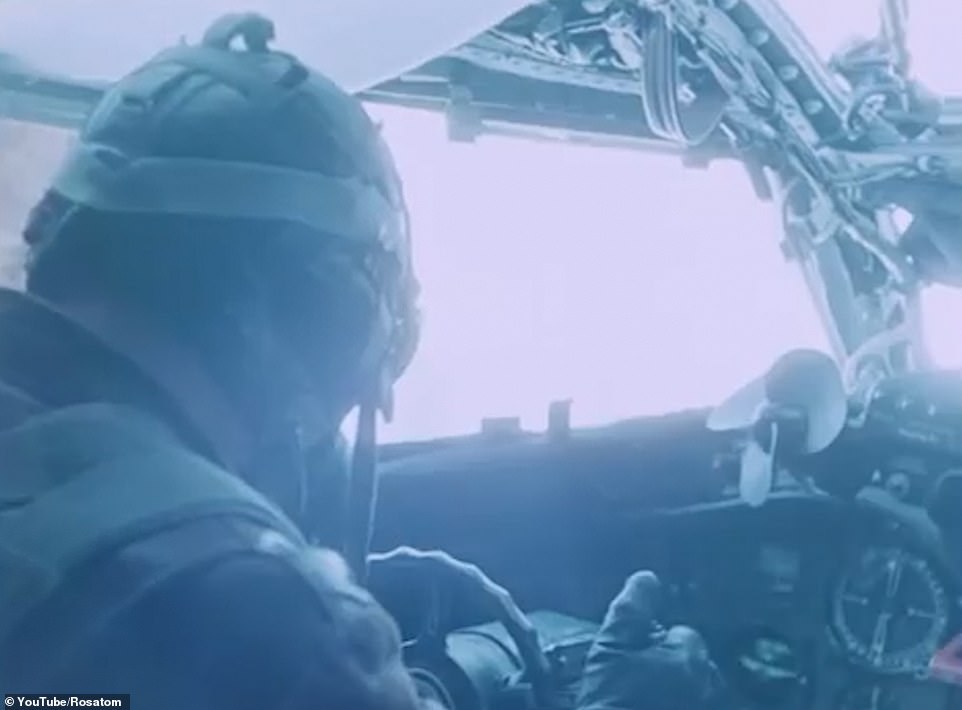 Footage from inside the cockpit of the bomber shows how bright the flash from the device was. The aircraft lost 1,000ft of altitude as the shockwave from the blast hit, but still managed to land safely 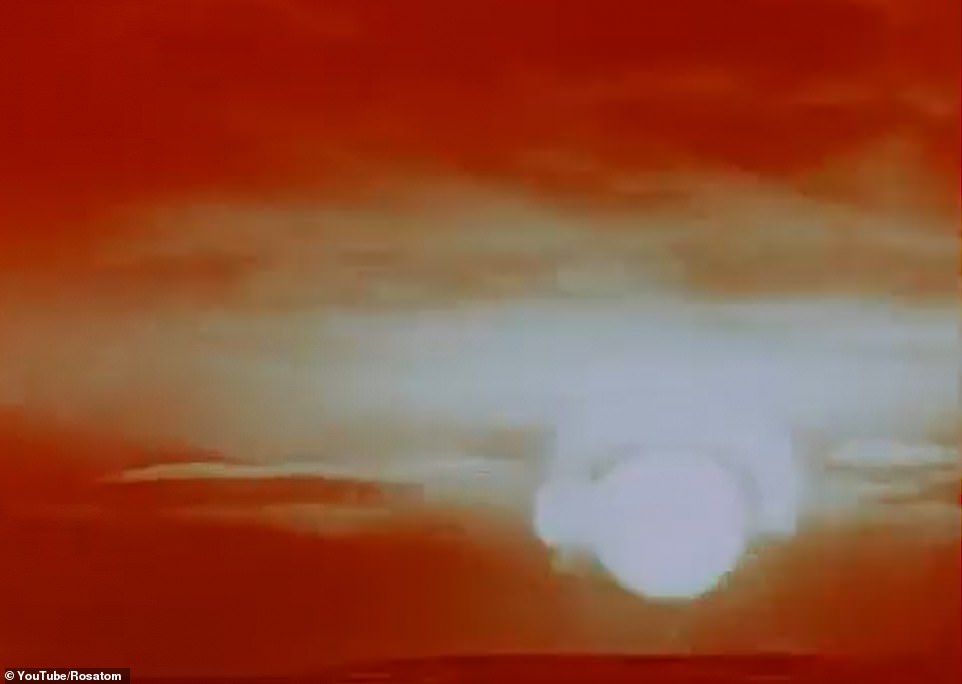 The shockwave from the blast caused an earthquake that measured 5.0 on the Richter scale, with radioactive fallout recorded across Scandinavia. Partly as a result of the blast, Russia and the USA agreed to ban open-air nuclear testing in 1963

For context, if dropped in the centre of London, the bomb and resulting shockwave would wipe the city off the map – causing third-degree burns to people as far away as Reading.

The blast was also big enough to register as a 5.0 earthquake on the Richter scale, and was picked up by seismological centres around the world.

The flash from the blast could be seen in Norway, while radioactive fallout ended up distributing itself widely across Scandinavia, prompting international condemnation of the test.

In 1963, partly as a result of the fallout from the Tsar Bomba test, the United States and Russia signed a treaty banning all atmospheric tests of nuclear weapons – meaning they had to be tested underground.

Instead of building a bigger device than the Tsar Bomba, the US decided it would be impractical for use in conflict and instead raced to miniturize the bombs so they could be fitted on missiles. A subsequent treaty in 1990 banned all nuclear testing.

In 2017, 84 nations singed the UN’s Nuclear Ban Treaty, forbidding signatories from developing, testing, building or stockpiling nuclear arms. However, not a single nuclear-armed nation agreed to sign the pact.