A team of entomologists in full-body protective gear vacuumed Asian giant hornets out of a tree in Washington state on Saturday, eradicating the first nest of the so-called murder hornets found in the United States.

The state's agricultural department said it had spent weeks searching for and trapping the hornets, which attack honeybee hives and could pose a threat to humans, because they can sting repeatedly with venom that is stronger than a honeybee's. 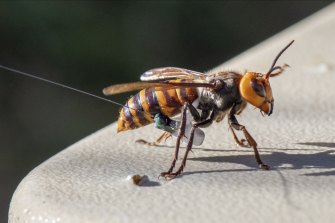 The state's entomologists found the nest close to the city of Blaine near the Canadian border on Thursday and returned on Saturday with protective suits and gloves to make the extraction.

"Got 'em. Vacuumed out several #AsianGiantHornets from a tree cavity near Blaine this morning," the agricultural department said on Twitter, adding that more details would be provided at a news conference on Monday. 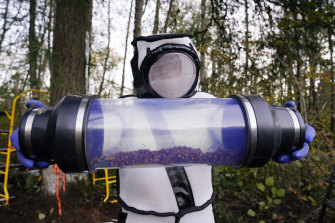 The stinging hornet, the world's largest, can grow as large as 2-1/2 inches (6.4 cm) in length and is native to south-east Asia, China and Taiwan. It was first discovered in the United States in December by a homeowner in Blaine.

Aside from the danger to humans, the hornet presents a threat to agriculture and the apiary industry, officials have said, because it is a known predator of honey bees, with a few of the hornets capable of wiping out an entire hive in hours.