Serco has won a new contract worth up to £322 million to continue running Covid-19 testing sites for another year.

Bosses said they signed a new deal with the Department of Health and Social Care (DHSC) to operate regional, local and mobile testing centres in England and Northern Ireland following a competitive tendering process.

The value of the new 12-month contract, with the option of a six-month extension, could change significantly depending on levels of demand in coming months, they added.

It means Serco will continue operating around 20% of sites across England and Northern Ireland, including drive-through and walk-in test centres, alongside mobile sites.

Serco has come under scrutiny for the large profits it has made from the pandemic and also faced criticism after the accidental sharing of the email addresses of 300 of its recruits for the government’s contract tracing efforts.

In 2013, it was claimed that the firm had charged the government for electronically monitoring people who were either dead, in jail, or had left the country. 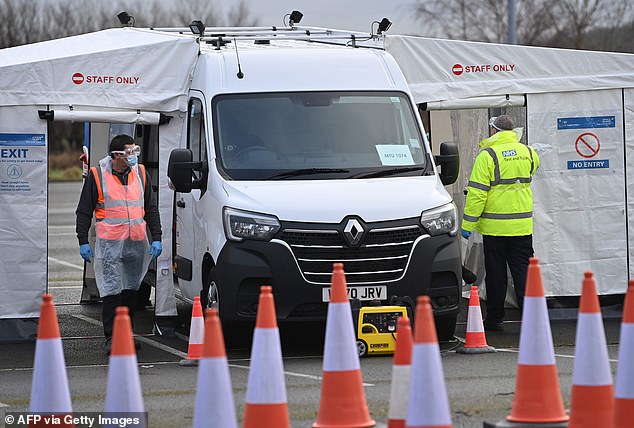 NHS Test and Trace employees work at a drive through testing site in Southport, north west England. Serco will continue operating around 20% of sites across England and Northern Ireland

Serco chief executive Rupert Soames, who received £4.9 million during 2020, said: ‘We are proud of the part we have played in building and operating the UK’s highly successful Covid-19 testing infrastructure.

‘From a standing start in March 2020, NHS Test & Trace has grown a network of regional, local and mobile sites which have delivered over 18.5 million individual tests, an average of 51,000 tests a day.

‘We are delighted that the DHSC has selected us to continue to support them in providing these services for at least the next 12 months.’

He added that the new contract is unlikely to increase profits beyond previous guidance set out earlier this month.

On June 14, Serco said it expects underlying trading profit to hit £200 million this year – £15 million more than previously forecast due to the extension of Covid-19 restrictions.

Serco has faced criticism over the large profits it has made from the pandemic and its decision to start paying a dividend to shareholders.

Labour leader Sir Keir Starmer said in February it was ‘outrageous’ that dividends would be reintroduced this year. 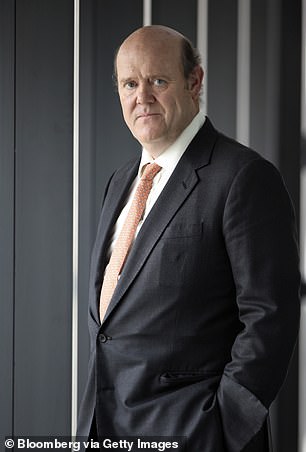 He tweeted at the time: ‘Taxpayers’ money shouldn’t be given to Serco’s shareholders via dividends.

‘The Government should have placed Test and Trace in the hands of our NHS and local communities.’

But Serco has defended its role, pointing out it repaid previously claimed furlough cash and shared a £5 million bonus among 50,000 frontline workers.

Bosses previously revealed they banked £400 million in extra revenues from Covid-19-related services, although profits from the pandemic were minimal – at £2 million.

They also said other services in parts of the economy that had shut were hit.

In March, a leaked government email revealed that Serco had been invited to put their staff forward for New Year honours.

Sources confirmed the leak after it was reported that Rupert Soames, the chief executive of outsourcing giant Serco, was among those to have received the email.

The request from BEIS permanent secretary Sarah Munby said: ‘I would like to invite you to submit honours nominations on behalf of your organisation as well as for any other individuals you think worthy of recognition.’

The Hampshire-based private contractor has been hit by a string of controversies in the past few years, including claims in 2013 that it had charged the government for electronically monitoring people who were either dead, in jail, or had left the country. 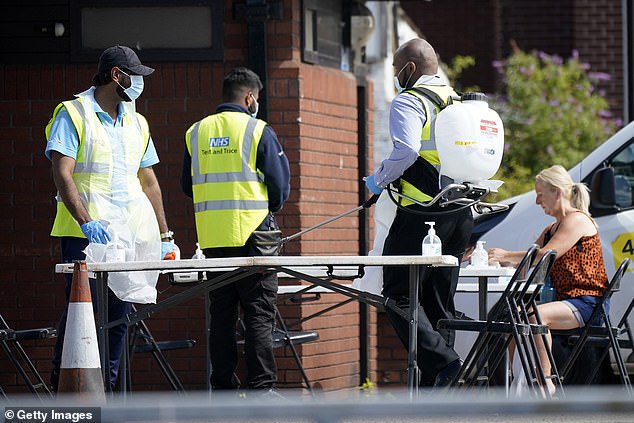 In May 2020, Serco, whose chief executive is Sir Winston Churchill’s grandson Rupert Soames, faced fresh criticism after accidentally sharing the email address of 300 of its recruits for the government’s contract tracing efforts.

But the blunder, which will do little for the confidence of millions of Britons who will be asked to hand over their personal details as part of the contact tracing system, is far from the first time Serco has faced criticism.

In July 2013, Serco, along with security firm G4S, who are also in the running to provide call centre staff for the contact tracing app, were accused of overcharging for their work tagging criminals.

Reports revealed that up to one in six of the 18,000 tags the government was billed for every day were not real.

The tags had been placed on criminals who were either dead, in jail or had left the country, it was claimed. 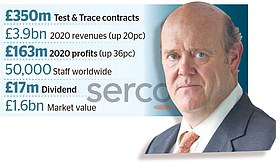 Serco has faced criticism for its role in NHS Test and Trace, which took months to become effective after it was launched last May to tackle the Covid pandemic.

The firm runs about a quarter of testing centres and half of contact tracing operations, with contracts worth about £350million.

He said it was ‘symptomatic of what’s wrong with outsourcing’ which also saw ‘low-paid workers lose the rights, pay and protections of public sector employees’.

Serco’s annual report said the bonus awarded to Mr Soames, left, was ‘a true and fair reflection of the underlying performance of the company and the executive directors throughout what has been an incredibly challenging year’.

The accusations prompted Whitehall to scrutinise every government contract given to the two private firms.

Serco and G4S were both stripped of their respective contracts by the government over the claims.

G4S agreed to pay back more than £100million in 2014, while Serco was fined nearly £19.2million and pay costs of £3.7million in 2019 as part of a settlement with the Serious Fraud Office.

In September 2013, just months after the tagging allegations emerged, a Serco-run immigration centre was stung by sexual abuse allegations after a 23-year-old Roma woman claimed she was assaulted.

The woman – who wasn’t identified – was awaiting deportation at Yarl’s Wood in Bedfordshire after committing an unspecified crime.

Two male members of staff were sacked a month later due to ‘inappropriate behaviour’ with a detainee.

Despite the troubles, the Home Office awarded Serco £70million in 2014 to keep operating Yarl’s Wood for another eight years.

In August 2014, campaigners claimed Serco was among a list of private contractors who used immigrant detainees for cheap labour.

Corporate Watch, the organisation behind the report, alleged Serco, G4S and others were ‘exploiting their captive migrant workforce’.

The Guardian reported some detainees held at detention centres were paid as little as £1 an hour.

Serco claimed at the time that the paid work was voluntary and in accordance with strict government rules.

Just months later, in January 2015, a refugee charity claimed female immigrants being held at the Serco-ran Yarl’s Wood were ‘treated like animals and sexually abused by staff’.

Women for Refugee Women said females held at the centre were watched by male staff in intimate situations including when using the toilet.

The charity interviewed 38 women who were recently or currently detained in Yarl’s Wood.

Six women claimed staff had made sexual suggestions and three alleged they were touched sexually. Seven reported being physically assaulted.

Serco hit headlines once again in November 2017, when leaked Paradise Papers revealed a law firm branded Serco a ‘high risk’ client for its troubled past.

The Guardian reported that concerns had been raised about Serco’s ‘history of problems, failures, fatal errors and overcharging’.

In August 2018, Serco sparked fury after it emerged it planned to evict hundreds of asylum seekers living in private accommodation in Glasgow without court orders.

Officials provide free housing for asylum seekers until their applications are accepted.

Serco paused the move to evict tenants whose application was denied after the criticism over the planned action, the BBC reported.

The firm was taken to court over the move, which furious activists described as a form of ‘housing apartheid’.

But Scotland’s highest court ruled in November 2019 the eviction of asylum seekers without court orders was lawful.