Sharks sink teeth into RAC: Staff get ‘1% wage rise as bosses’ deals soar by 25%’… and who is in charge? Private equity fat cats who preyed on Debenhams

The RAC is facing what would be its first strike after offering staff a ‘derisory’ 1 per cent pay rise.

Executive directors at the private equity-owned firm however are understood to have awarded themselves a 25 per cent hike.

The salary of the highest-paid director rose even more – by 27 per cent.

The owners, CVC Capital and Singaporean wealth fund GIC, are thought to be paying themselves a £44million dividend for last year.

Over the previous four years, they have extracted more than £400million, equal to one and a half times the operating profit.

CVC previously co-owned the AA – a rival motoring operation brought to the brink of collapse after it was loaded with huge debts and paid out massive dividends. 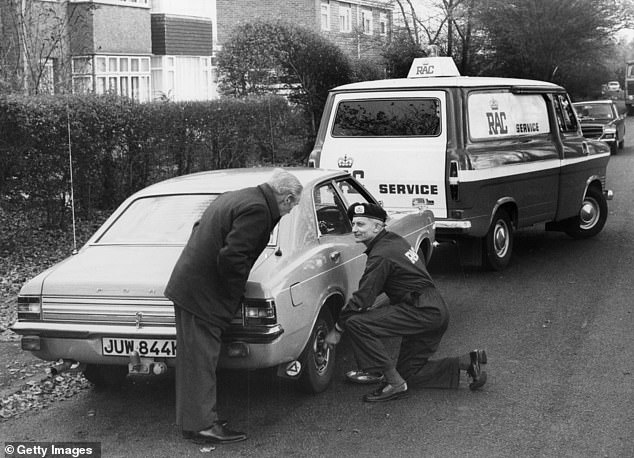 An RAC man fixing a broken down Ford Cortina around 1970. Executive directors at the private equity-owned firm are understood to have awarded themselves a 25 per cent pay hike

Lord Sikka, a Labour peer and accountant, described the size of the dividends extracted from the RAC as ‘worrying’, adding: ‘It’s an absolute disgrace.’

Nick Hood, an insolvency expert, said the strategy pursued by the RAC’s owners was risky in terms of debt levels and payouts.

He added: ‘The thing about the private equity model is it’s absolutely fine in good times, providing the business is profitable and cash generative. When you end up in any serious downturn, that structure is highly dangerous.’

CVC is one of the three former private equity co-owners of Debenhams, who piled it with debt, pocketing £1.2billion in dividends and selling store freeholds. Debt and soaring rent bills were major factors in the department store chain’s eventual demise. 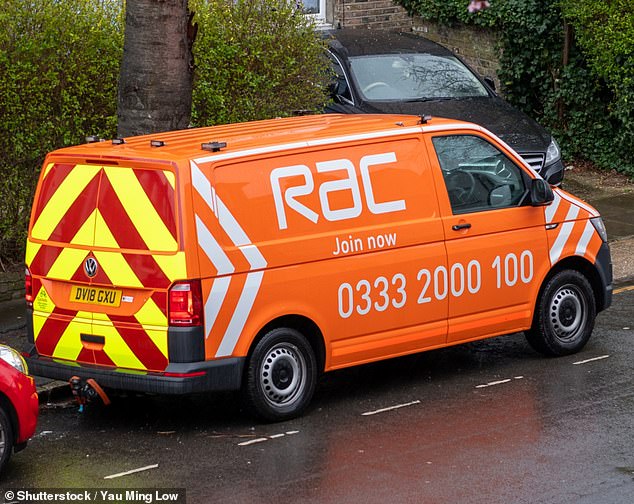 Lord Sikka, a Labour peer and accountant, described the size of the dividends extracted from the RAC as ‘worrying’, adding: ‘It’s an absolute disgrace’ (file image)

And the RAC’s chairman is Rob Templeman, who was installed as chief executive of Debenhams by its one-time private equity owners. The high street chain, once one of Britain’s great retail institutions, closed its doors for the final time this month.

Breakdown firms such as the RAC are attractive to private equity outfits because of the ‘goodwill’ they have built up.

This covers factors such as a loyal customer base or brand reputation and – in the case of the RAC – its goodwill is estimated to be worth £2billion.

The Unite trade union has called the 1 per cent pay offer at the RAC ‘derisory’. It comes even when annual staffing costs have fallen 3 per cent in 12 months through natural wastage and despite crews working through the pandemic at risk to their health.

Talks are taking place between management and Unite to thrash out an improved deal but, if they fail, ‘all options’ are said to be on the table including industrial action.

The ‘£80million alpha male’ chairman who never loses out

Rob Templeman has been a top executive in the private equity world for 20 years.

His stint as chairman of the RAC follows a controversial spell until 2011 as chief executive of Debenhams, which finally closed its doors this month after struggling with massive debts built up under buy-out owners.

The 63-year-old made his name in the 1990s when he ran the furniture company Harveys, owned by Lord Harris of Peckham, a Tory life peer and party donor. 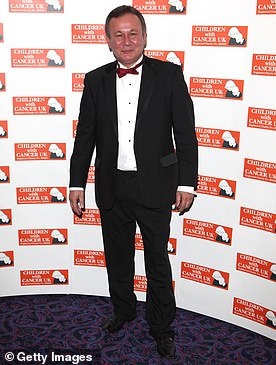 In 2001, he was made chief executive of Homebase following its £750million sale by Sainsbury’s to private equity firm Schroders – which later became Permira.

Permira quickly made a big profit – offloading Homebase to Great Universal Stores for £900million in 2002.

Mr Templeman – known in City circles as an ‘alpha male’ and with a fortune estimated at £79million – became executive chairman at Halfords when it was bought by CVC Capital for £427million in 2002.

Efficiency savings followed and when Halfords was relisted on the stock market, Mr Templeman, pictured above, is said to have shared in a £30million windfall with three other directors.

He took over at Debenhams in 2003 and was paid £7.9million in salary over eight years. According to a Financial Times report, the married father of two may also have made as much as £41million from its stock market listing in 2006.

After leaving Debenhams he moved to the British Retail Consortium and then the RAC – becoming reunited with CVC after it took over the motoring group in late 2015.

Neither the RAC nor the union was able to point to a previous example of a strike in the institution’s 124-year history. Unite has voiced concerns about rising debt levels and over how much money is being extracted from the RAC in dividends.

Analysis of the accounts for 2016-2019 shows that while operating profit was £283million, £446million was extracted in dividends.

Public companies generally pay out less. Bank debt at the RAC rose over the same period, from £1.1billion to £1.4billion.

A source close to Unite said: ‘Our concern at the RAC would be that asset stripping and loading a company with unmanageable debt is ultimately a road to disaster.

‘We monitor the previous history and track record of investors – and the alarm bells will ring if you compare what’s happening in RAC to what happened in the AA.’

The RAC was owned by US private equity firm Carlyle Group before being taken over by CVC and GIC in late 2015. An RAC spokesman said: ‘Unite and the RAC enjoy a good working relationship built up over many years and there’s no prospect of any change to that.

‘We are both confident of a mutually acceptable outcome.

‘Over the last few years, the growth in market share and revenues has led to over 300 new colleagues joining.’

The AA’s near-demise was averted by another private equity takeover last year when it was valued at just £219million, against debts of £2.65billion. Its share price had fallen from 250p in 2014 to a low of just 15p.

Back in 2003, the AA – then part of Centrica – was a highly profitable, award-winning business with surging customer numbers. Overall profits had jumped by 27 per cent in a year to £93million.

Unions believe the company’s changing fortunes are down to its ownership in the intervening years by ‘marauding financial predators’.

CVC Capital and Permira bought the firm in 2004. They are thought to have paid only £500million toward the takeover, while the remaining £1.25billion of the purchase price was debt loaded on to the AA’s books.

Tim Parker was installed as chief executive and was nicknamed the ‘Prince of Darkness’ for his role in slashing jobs.

He is chairman of the Post Office – under fire for its treatment of staff wrongly accused of fraud – but remains an adviser to CVC.

Some 3,400 of the AA’s 10,000 staff were made redundant in ‘efficiency savings’. Services were also pared back, including the axing of overnight patrols.

Meanwhile, £500million in dividends was paid to the private equity owners in the three years to 2007.

In a House of Commons motion that year, MPs accused CVC and Permira of ‘blatant asset stripping’ at the breakdown firm – a mutual owned by its members until 1999.

Further debt was piled on to the books from a later merger with Saga – owned by another private equity firm, Charterhouse. Combined borrowing at the AA and Saga increased to nearly £5billion, funding a £2billion windfall for private equity.

Forced out, hotel inspector who stood up to ‘bullying’ private equity bosses

by Richard Marsden for The Daily Mail

An AA hotel inspector unfairly dismissed after opposing cuts to terms and conditions accused private equity bosses of ‘putting lives and mental health at risk to earn their money’.

Jayne Wyatt, 61, was sacked by the organisation after 30 years of service. She claims the ordeal drove her to the brink of suicide. Her dismissal came after the AA’s then private equity owners CVC and Permira appointed a new manager in the hotels division to oversee changes in work contracts.

The GMB union, which represents several thousand AA staff, backed Miss Wyatt, saying the changes amounted to a pay cut of £9,000 a year. The union said the rewritten contracts also gave bosses the right to change pay and conditions without negotiation. 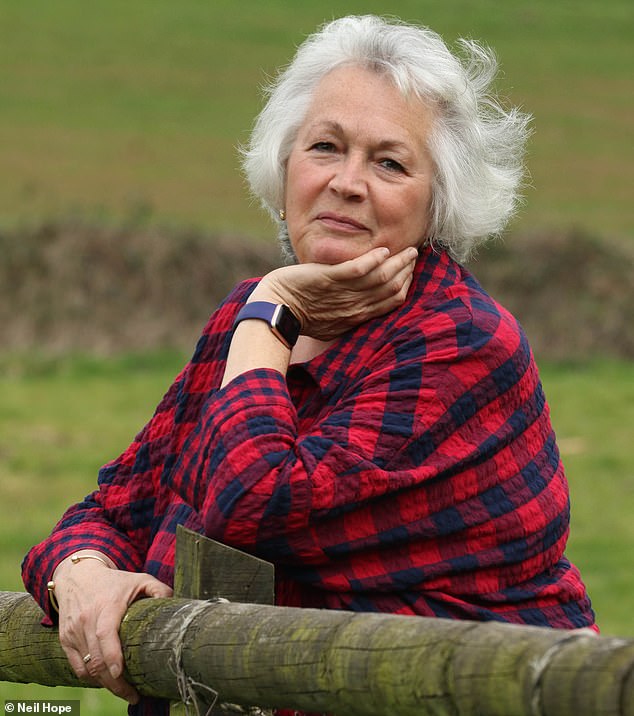 Jayne Wyatt (pictured), 61, was sacked by the organisation after 30 years of service. She claims the ordeal drove her to the brink of suicide

When Miss Wyatt voiced her opposition, she claimed she was victimised and bullied before being dismissed in 2007. Unfounded accusations were made that she had sent a colleague pornographic material.

Miss Wyatt, of Taunton, said that without the support she received from her trade union she may have taken her own life.

She said: ‘The people who ran the AA have gone away with fortunes which were taken out of the company. What they’ve done to earn their money is they’ve actually put people’s lives and mental health at risk.

‘It absolutely stinks. I was a real problem to them because I opposed what they were trying to do yet they couldn’t get rid of me because of my performance. They used seriously underhand tactics. I would call it bullying.

‘Everyone used to look up to the AA. It was known as the fourth emergency service and was like a big extended family. As hotel inspectors, we were revered within the travel industry.

‘Now the brand means diddly squat and so it should after what has happened to it. Under private equity they took away all the passion for doing a job well.

‘The GMB funded my legal fees and provided me with enormous support. I was in a terrible place at the time and went from travelling all over the country, spending five out of seven nights away, to being unable to go out anywhere.

‘Without the help of union officials, I wouldn’t be here. That’s how awful it was.’

Speaking after her tribunal victory, Paul Maloney, GMB national officer, said: ‘Jayne Wyatt stood up to the bullying and harassment visited on the workforce of the AA by the private equity owners.

‘She was sacked for refusing to give a blank cheque to the AA. She was victimised for her stand and she was the subject of scurrilous and spurious allegations.’

In a statement at the time, the AA said: ‘The tribunal accepted that the dismissal was because of a breakdown in relationships and not because Miss Wyatt had rejected new terms and conditions offered by the company.’