Preparing for battle: Soldiers complete transformation of London’s ExCel centre into new NHS Nightingale hospital ahead of toughest week yet in coronavirus fight

Officers in uniform took to the international convention centre in Newham, East London, to assist construction workers and NHS staff in the final touches of the new Nightingale hospital as the UK tries to control the spread of the deadly virus which has now claimed the lives of 1,228 in the country.

Incredible images from inside the new hospital showed military personnel help workers in erecting cubicles and carrying equipment into the transformed centre- which is set to hold up to 4,000 COVID-19 patients and will initially have 500 beds.

Yesterday the nation was given their very first glimpse of the new field hospital as construction work began and and NHS staff helped unload medical equipment including oxygen tanks, heart monitors and defibrillators. 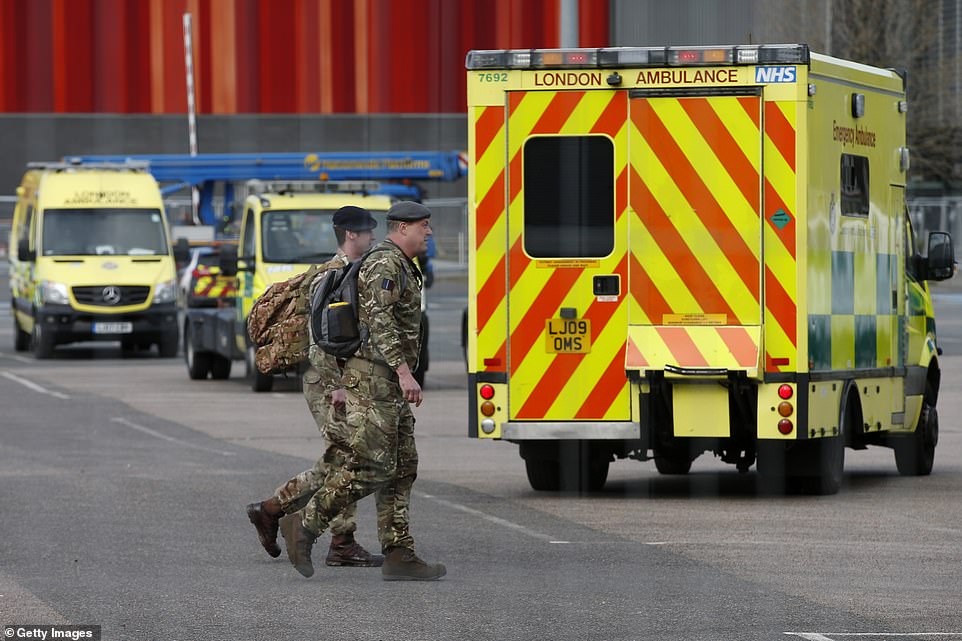 Soldiers arrive at the new NHS Nightingale Hospital at the ExCeL centre in Newham, East London, today as the hospital gears up to receive its first patients next week 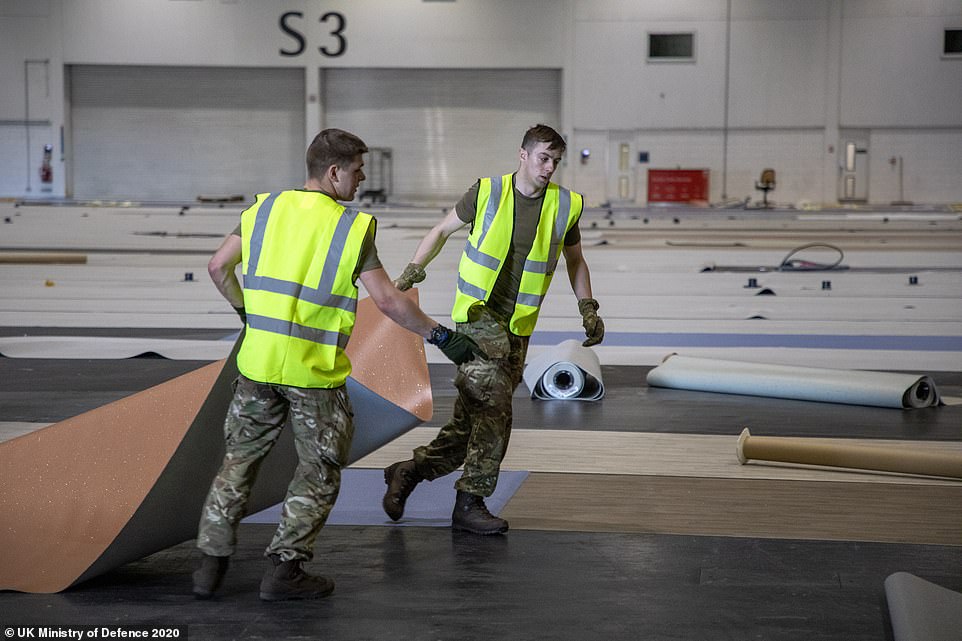 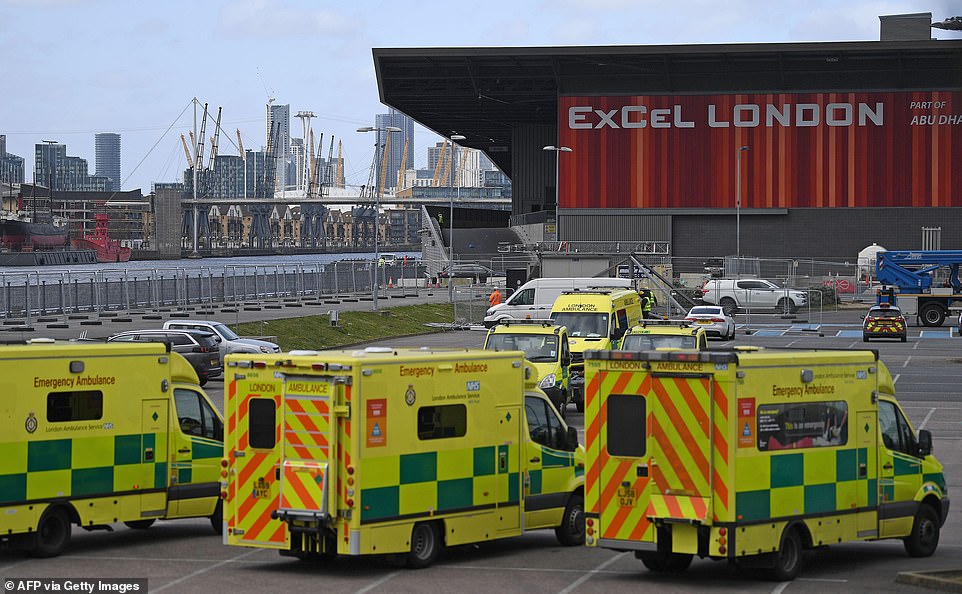 As military planners continue to work with Health Service officials to help create the new hospital in the capital, ambulances were seen lining up outside the centre to give up their services to the effort and help prepare for the hospital’s first patients who are set to arrive next week.

Extraordinary pictures from inside the new hospital, which will join two other hospital NHS Nightingale hospitals being built in Birmingham and Manchester, showed how hundreds of cubicles had been erected inside the vast space in an effort to facilitate for the thousands of patients due to arrive.

The hospital, which is expected to open next Saturday, April 4, will comprise of two wards which will each be able to care for 2,000 sick patients.

Yesterday medical staff were seen carrying out ‘dummy runs’, wheeling a model of a fake patient on a trolley into the ExCel exhibition centre. 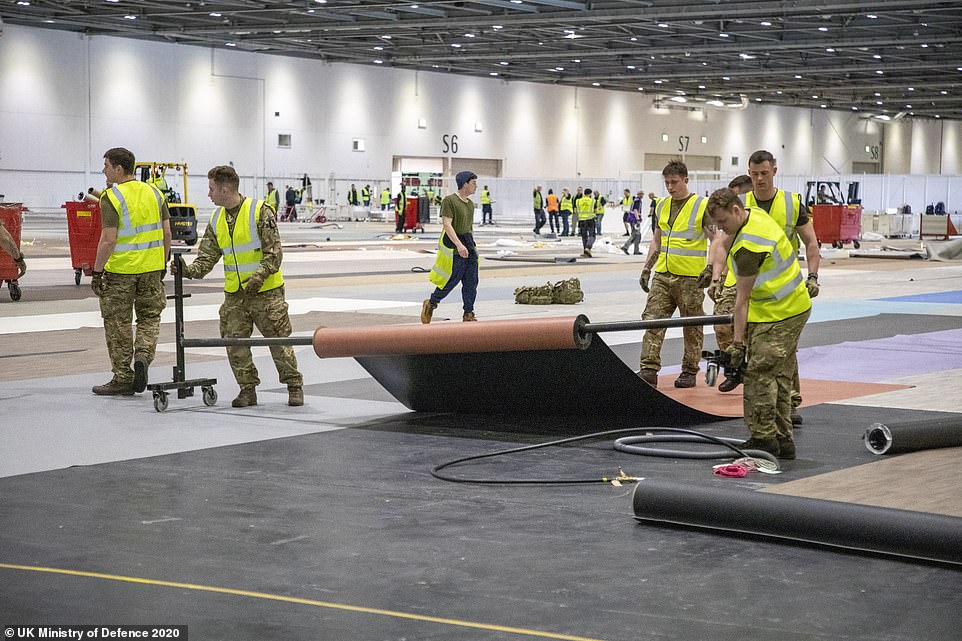 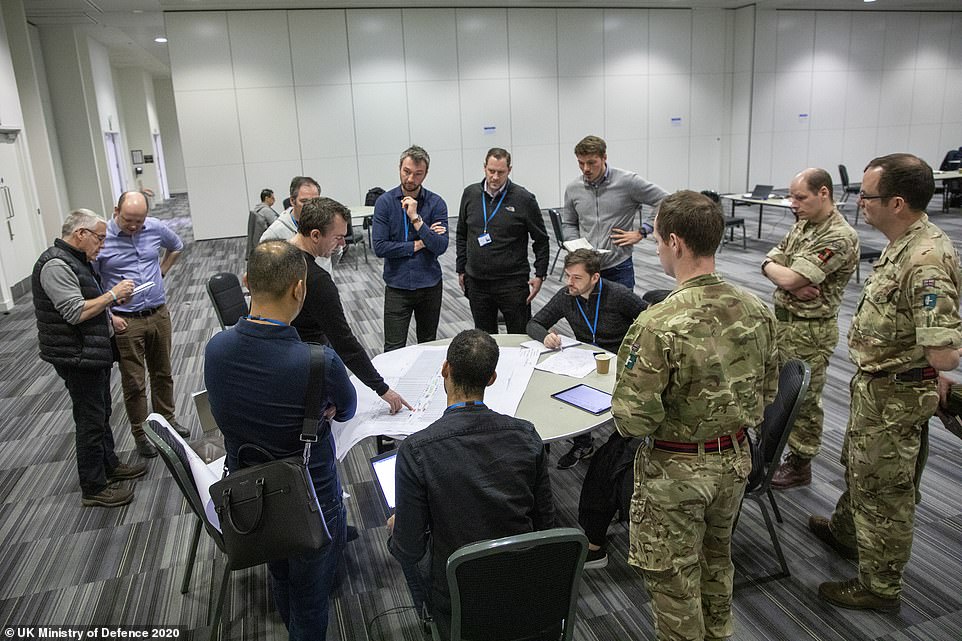 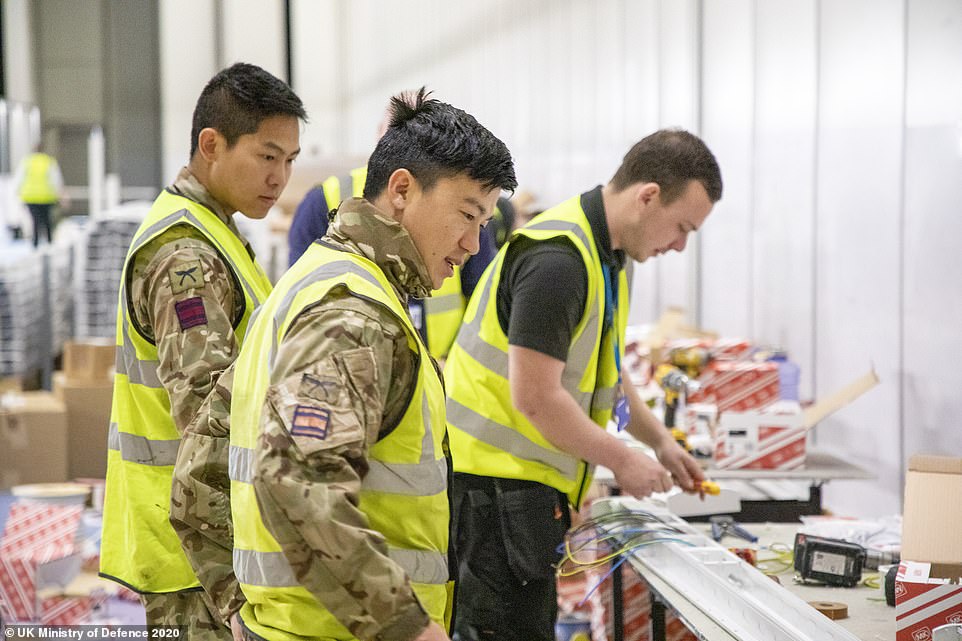 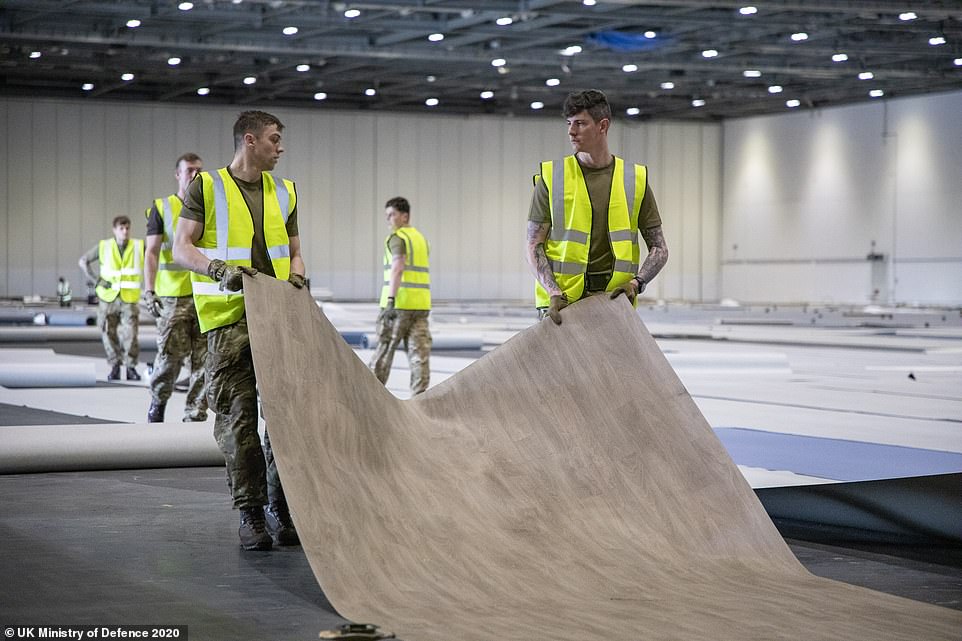 The latest images come after it was revealed that the new hospital in London would be offering help desk staff an annual salary of £37,500 at the new site.

Online recruitment adverts showed how administration staff at the centre would be offered an annual salary that was £13,500 more than the average nurse’s starting salary of £24,000.

Those taking on the admin role would also be entitled to claim £15 a day for travel expenses and £10 for food, unlike frontline nurses.

A message on their job advertisement also assured staff that they would be provided with ‘full personal protective equipment (PPE)’.

On Friday Mayor Sadiq Khan warned Londoners that the situation could become ‘a lot worse’ over the next few weeks but ‘we are going to do what we can’.

He said: ‘I need to warn people that it is going to a lot worse over the next few weeks.

‘But we are going to do what we can for that eventuality. The number of people we are talking about are large and we need to be ready for that. 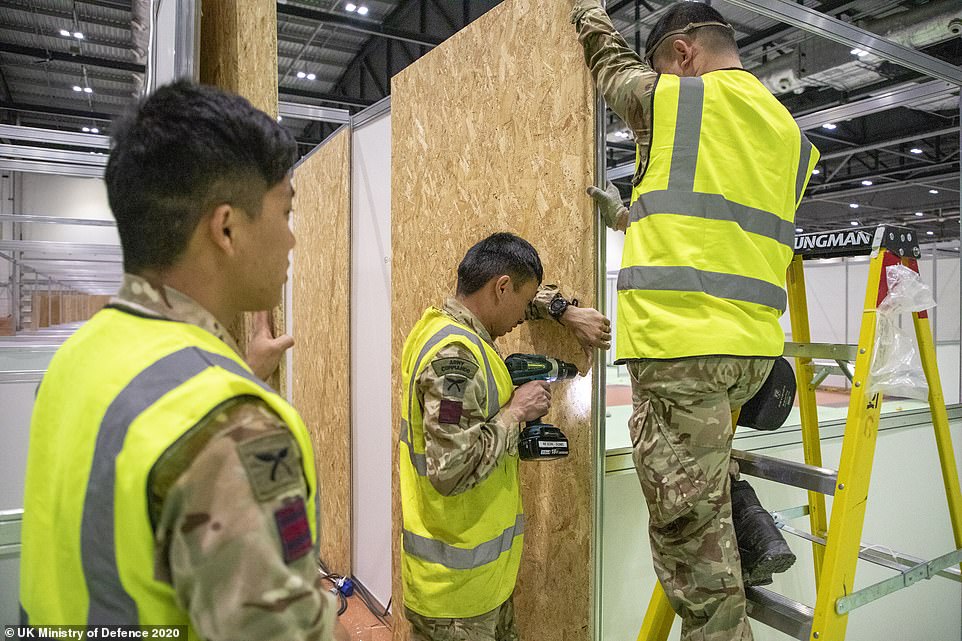 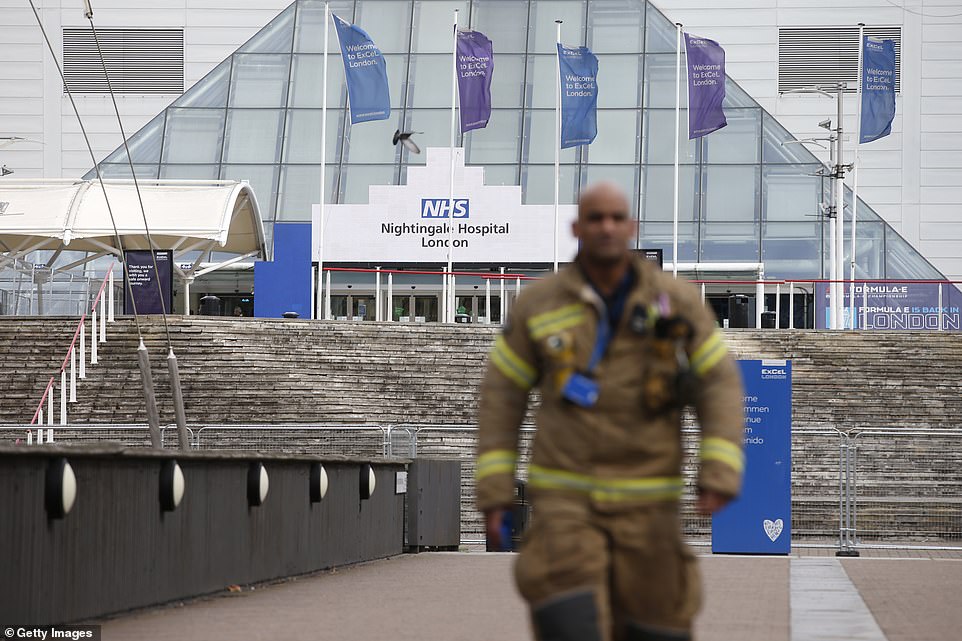 Pictured: A firefighter stands outside the new NHS Nightingale Hospital at ExCeL London, as the country tries to cope with the number of coronavirus patients 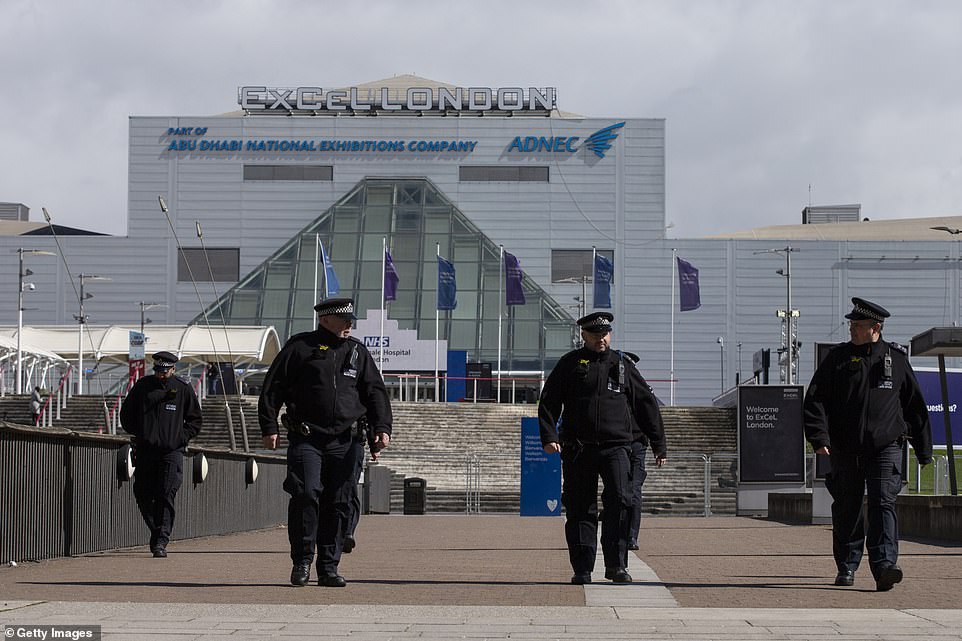 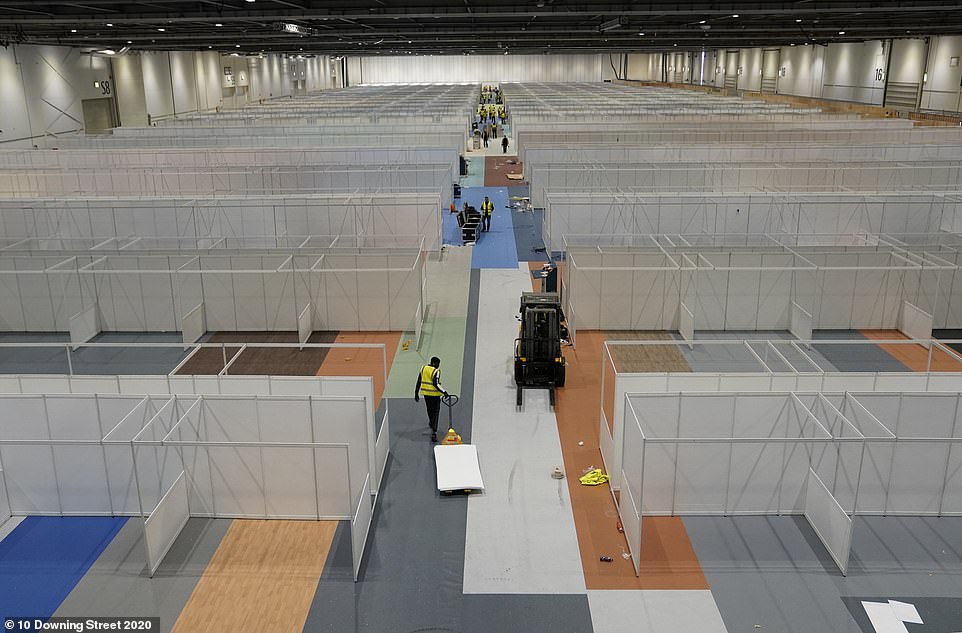 The new hospital, which is set to open next Saturday,  will initially contain 500 beds and will be able tohold up to 4,000 COVID-19 patients 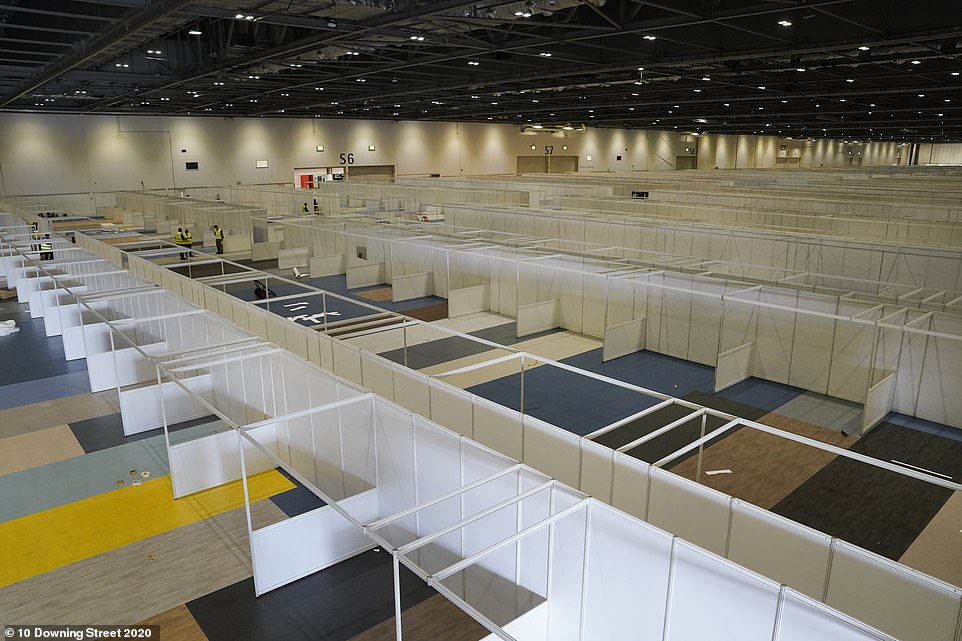 The new hospital in London will comprise of two wards which will each be able to house 2,000 sick patients

‘You will have seen the amount of dead already in London, we are two or three weeks ahead of the rest of the country and we know the peak is coming soon, three to five weeks away.’

Earlier today it was revealed that a petition to name Birmingham’s temporary field hospital after Crimean War nurse Mary Seacole had reached 1,000 signatures.

The NHS chief executive of the NHS Sir Simon Stevens confirmed the city’s National Exhibition Centre (NEC) would be transformed into a site to treat coronavirus patients on Friday.

The NEC is one of the latest proposals for a temporary field hospital after the ExCeL site in London, which has been equipped with 4,000 beds to cope with any patient surge in the capital.

Speaking about the two new NHS Nightingale Hospitals due to open in Birmingham and Manchester, the NHS chief said: ‘It will take a monumental effort from everyone across the country to beat this epidemic, but the NHS is mobilising like never before to deliver care in new ways, to thousands more people – starting with the opening of the first NHS Nightingale in London later next week.

‘These are extraordinary steps the NHS is taking, and clinicians, managers and military planners are working day and night to create, equip and staff these hospitals from scratch and prepare for the surge that is likely to be coming.’

The head of the NHS Sir Simon Stevens confirmed the city’s National Exhibition Centre (NEC) would be transformed into a site to treat coronavirus patients on Friday.

The NEC is one of the latest proposals for a temporary field hospital after the ExCeL site in London, which has been equipped with 4,000 beds to cope with any patient surge in the capital.

The London hospital was named NHS Nightingale after the founder of modern nursing, Florence Nightingale.

Activist Patrick Vernon has launched a petition to name the latest field hospital after British-Jamaican Mary Seacole – who nursed wounded soldiers during the Crimean War.

Mr Vernon said the move would act as a ‘beacon of hope and diversity for the country’.

Addressing his reasons for setting up the petition, Mr Vernon wrote: ‘With the Excel conference centre at the Docklands being named NHS Nightingale after Florence Nightingale, it is important that the second emergency hospital tackling Covid-19 at the NEC in Birmingham should be called the NHS Seacole.

‘Mary Seacole is a Jamaican British war hero who supported British troops as a nurse during the Crimean war.

‘Despite being rejected by Florence Nightingale to join her band of nurses, she travelled to the front line of the war in Crimea. She was so widely loved for her healing powers, the soldiers nicknamed her ‘Mother Seacole’.’

Mr Vernon continued: ‘Mary inspired thousands of women and people of colour to dedicate their lives to the NHS.

‘Recently the Royal College of Nursing recognised her contribution to British nursing, publicly declaring her on the same footing as Florence Nightingale.

‘I am an activist and campaigner who has been fighting for years to get black Britons recognised for their contribution to history. In 2003 I launched an initiative called 100 Great Black Britons, where the public voted Mary Seacole as the greatest black Briton of all time for the heroic way she served the country during war.’

Calling on people to support the cause, Mr Vernon said: ‘The lack of ethnic minority representation needs to change, especially in the NHS, especially at senior level and in the national narrative of the country.’

‘Naming Mary Seacole as part of the fight against Covid-19 would be a major step forward highlighting the contribution of BAME staff who have worked tirelessly for the NHS since its creation in 1948 and highlight the collective spirit of the country to fight the pandemic and reduce the impact of infection.

‘Please sign this petition so Matt Hancock the Secretary State for Health can name the NEC building as the Seacole NHS as a beacon of hope and diversity for the country.’