Who do you think you’re robin? Spectacular images show birds fighting over seeds at nature reserve

Sharing food convivially is a pastime enjoyed by most.

But it seems these birds don’t hold the same opinion, scrapping over some succulent seeds at Brockholes Nature Reserve near Preston.

The robin and a blue tit were photographed in a beak-to-beak brawl by David Bennion, 62, after the tit cheekily swooped in to pinch a seed or two.

The food had been left on a post for the reserve’s residents to enjoy. 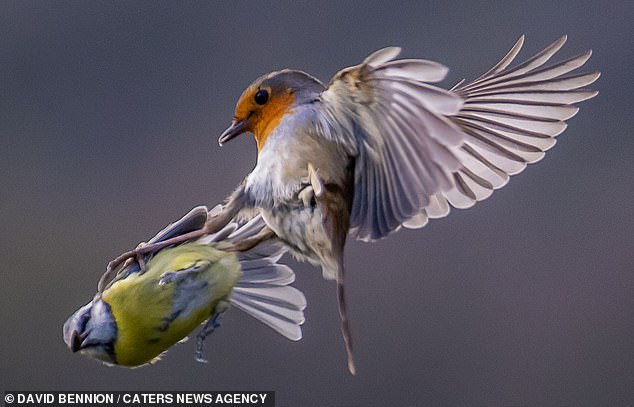 But what was meant as a sharing platter ended up as a battle of furious wings and talons – with the robin emerging victorious to claim the whole stash, while the tit was forced into a humiliating retreat.

Mr Bennion said: ‘I had put some seed on a fence post to lure the birds – my plan then is to take shots as they fly away so I’d get them in flight with the wing details.

‘A robin landed and started to feed- they are always the most difficult to capture in flight because they are bold and will feed for quite a while hence it is not easy to predict when they will take off.

‘Normally all the other birds will stay away while a Robin is feeding because they are quite aggressive and territorial.

‘While the robin was feeding a little bluetit decided he wasn’t going to wait and tried to land on the fence post.

‘This triggered a firm rebuff from the robin and it attacked the blue tit very aggressively.

‘The blue tit flew off and normally that would be the end of it but this time the Robin pursued it and actually grabbed it in mid air before throwing it like a tennis ball.

‘The blue tit wasn’t harmed and actually came back for seed a few minutes later.

‘Everything was so fast so I was pleased to have captured the details and was surprised at how aggressively the robin had stuck its claws into the blue tit.’