The Andrews government is facing calls to pour more cash into walking and cycling paths in the wake of targets it set to boost active modes of travel under its new climate strategy.

There was less funding for walking and cycling projects in this year’s state budget compared with the previous year, despite warnings that a drop in public transport use caused by COVID-19 infection fears would worsen the city’s traffic unless viable cycling and walking options were rolled out quickly. 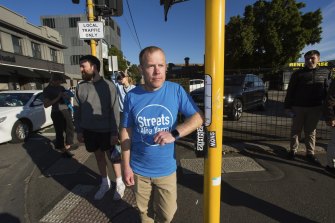 Jeremy Lawrence is pushing for more pedestrian crossings and wider footpaths in his suburb.Credit:Paul Jeffers

The state government allocated $21 million for new walking and cycling upgrades in its budget handed down last week, compared to the $38 million it set aside the year before. The cash represents a fraction of the money spent on road and rail works across the state.

Failing to do this would put the government in danger of falling short on its new target of 25 per cent of all trips being cycling or walking by 2030, he warned. It is currently 18 per cent.

“We don’t have a ministry of magic to simply wave a wand to reach our targets, it requires significant investment,” Mr Rossiter said.

“We need to act now or else people will continue to drive short trips over the long term … these behaviours will become entrenched.”

Craig Richards, chief executive of cycling lobby group Bicycle Network, welcomed new funding for a shared trail between Eltham and Greensborough in Melbourne’s north-east and shared bike and walking lanes along the Kew to Highett Strategic Cycling Corridor at Toorak Road in the south-east, alongside the government’s promise to build 100 kilometres of pop-up bike lanes.

But he described the budget as largely “vanilla” when it came to cycling and active transport upgrades. “We’re not confident it [the new funding] does enough to harness the recent burst in bike riding.”

A state government spokeswoman said more than 250 kilometres of walking paths were being built or had already been delivered as part of the state’s major road and rail projects.

Under the $100 million TAC Safer Cyclists and Pedestrian Fund unveiled ahead of the 2014 state election, the government had built 20 of the 44 walking and cycling projects it committed to, she said.

“We’re delivering hundreds of kilometres of new walking and cycling infrastructure across the state to improve safety and give Victorians more choice about how they travel,” she said.

John Stanley, one of the authors of Plan Melbourne, the state’s planning blueprint towards 2050, said new cycling and walking paths being built across the states as part of major infrastructure projects were “incidental” upgrades.

A broader program was needed that put jobs and services within a 20-minute return walk from people’s homes — a key recommendation of Plan Melbourne. This was needed now more than ever, as more people worked from home, he said.

“This has to be the government’s main focus, not something you add on to a major road project or rail extension,” Professor Stanley said.

Jeremy Lawrence, the president of community group Streets Alive Yarra, is pushing for more pedestrian crossings in the inner-city suburb of Cremorne.

Two weeks ago, his group painted temporary zebra crossings at Cremorne and Balmain streets under a resident-led trial designed to slow down traffic and give pedestrians more priority.

The suburb is expected to be flooded with new residents and workers due to a major building boom.

Mr Lawrence said this would worsen traffic already clogging up the streets in the small suburb ringed by major arterial roads — Punt Road, Swan and Church streets and CityLink. The problem was made worse by the lack of safe footpaths.

“There’s always a safety concern when the volume and speeds of traffic increase,” Mr Lawrence said.

“You only have to spend a little bit of time walking around Cremorne to see how narrow and non-existent the footpaths are. Prams or wheelchair users are often forced to go on the asphalt.

“Everybody wants a liveable suburb and us no more or less than anyone else.”