A STUNNING crop circle has appeared in the British countryside to raise awareness of locally grown food.

Cereal maker Weetabix is the brains behind the creation, which was carefully produced by a team of just four people over a period of 36 hours. 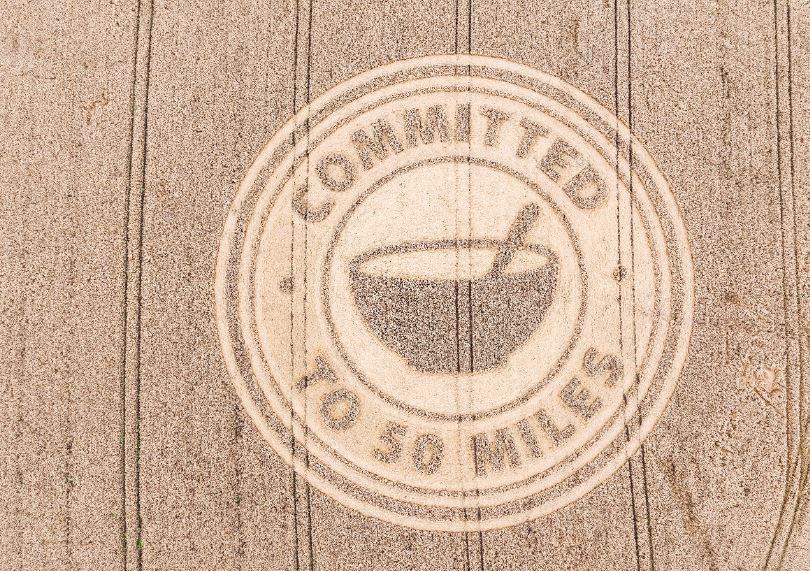 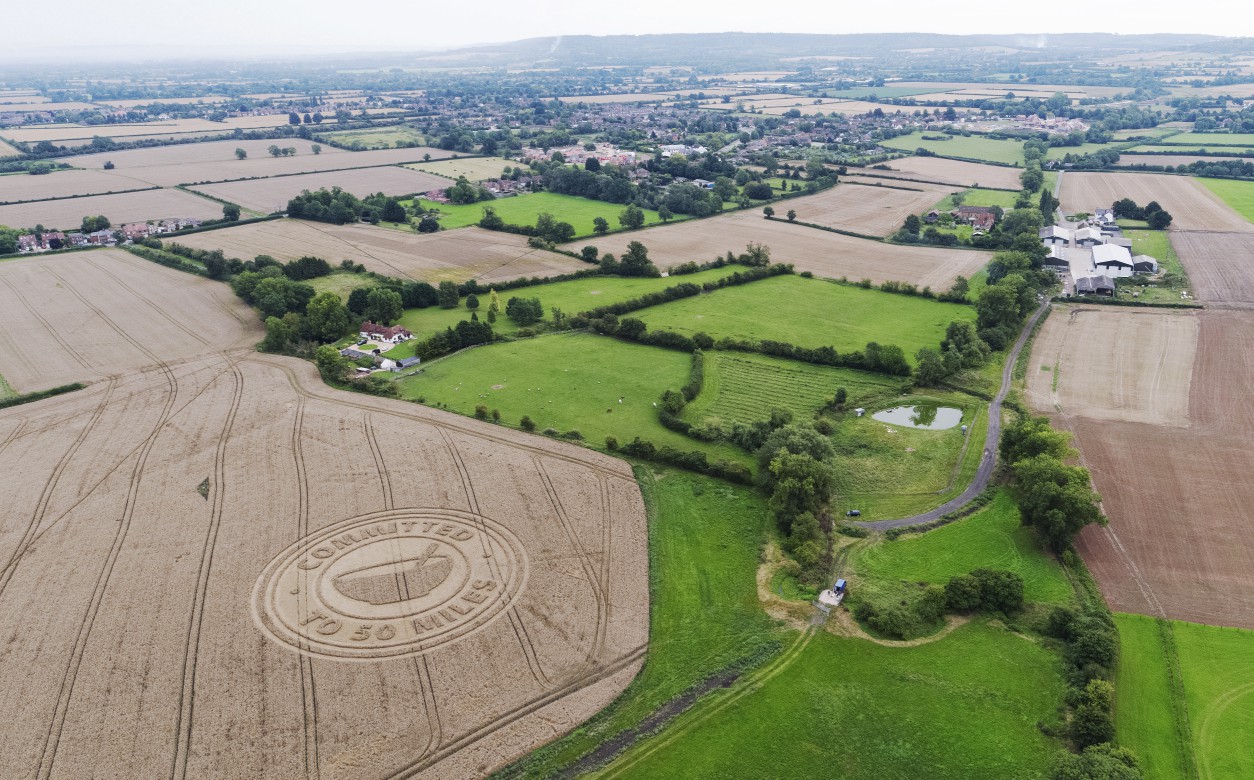 The images from Moat Farm wheat field in Stoke Mandeville feature a cereal bowl and spoon, along with the words, "committed to 50 miles".

The proclamation highlights the Northamptonshire-based company’s commitment to only using wheat produced within 50 miles of its factory.

Anthony Pearce, owner of Moat Farm, said: “As a British farmer it's comforting to see some positives emerge from the first half of the year with people looking to support local businesses more and seeking to have a greater understanding of where their food comes from.

“We have grown wheat to meet Weetabix’s high standards for 10 years and are proud to be one of the farms that fall within the 50-mile radius of their factory.”

The crop circle comes after it was revealed shoppers estimate just 28 per cent of their shopping basket is made up of local produce.

Research of 2,000 adults, also commissioned by Weetabix, found while 48 per cent actively look for locally sourced items in the supermarket, 52 per cent do not.

Of the 48 per cent, more than a third do so to be more ethical in their shopping habits, 68 per cent to support local farmers and 48 per cent for healthier and fresher produce.

A further 51 per cent like to help out the economy and 45 per cent hope to reduce the food miles items have travelled. 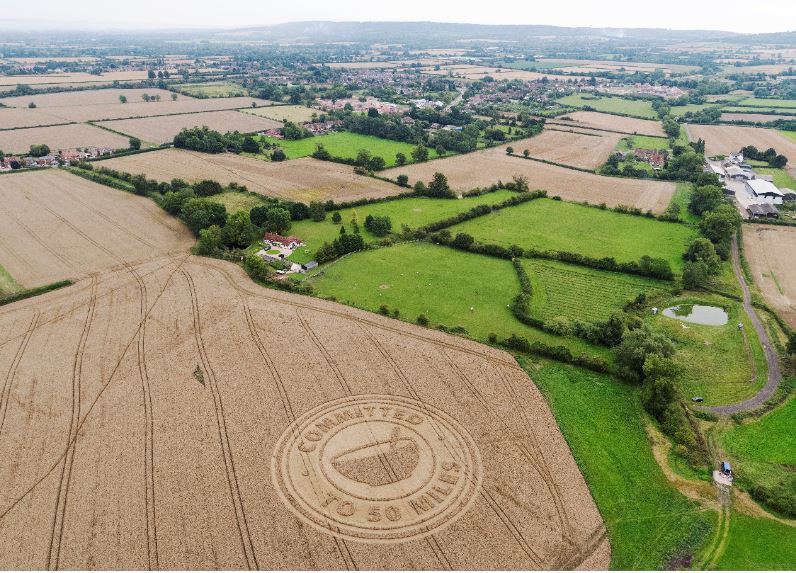 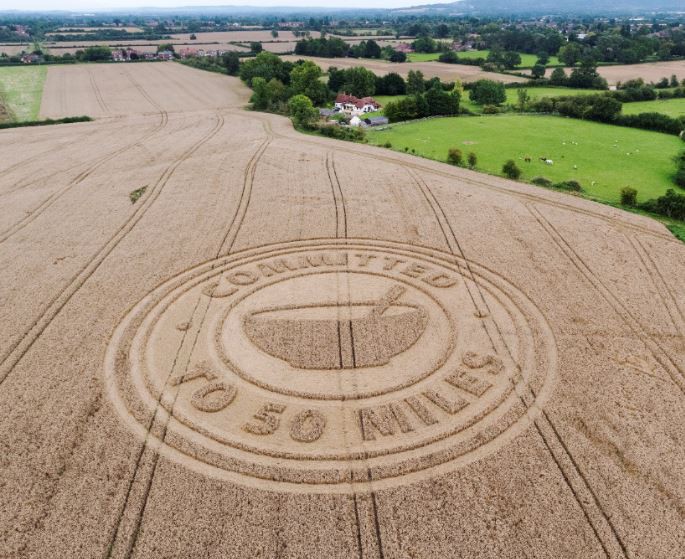 But of those who do not seek out locally sourced goods, a sixth admitted they have never thought of it and a third are under the impression such items are expensive.

A further 31 per cent feel there are limited options and as a result, 45 per cent of Brits would like to see the big brands sourcing local ingredients to lead the way.

More than a third do check the food miles of items when shopping– the distance it has travelled – by looking up the country of origin.

A further 29 per cent also believe they will receive healthier food and 58 per cent think the goods will be fresher as they have travelled less.

Almost a third even said the distance something has travelled would make them decide against buying a product – with a quarter refusing to buy an item which has travelled up to 1,000 miles.

When it comes to meals, breakfast is believed to be the dish with the fewest food miles behind it – possibly due to the likes of eggs, cereals and milk.

Half of those polled believe food miles and locally sourced goods should be highlighted more to educate consumers.

And 83 per cent admitted they are likely to be more supportive of brands which use  locally sourced ingredients – if they are aware of them.

Items people are likely to buy which have been grown and produced in the UK were found to include butter, eggs and strawberries.

Whereas the likes of teabags, bananas and chocolate are believed to be difficult to purchase "locally".

Almost a third of those surveyed via OnePoll said they have supported local businesses more during lockdown, and since, than ever before.

And 30 per cent admitted the pandemic has made them realise how important locally sourced products are to the economy.

Weetabix marketing director Francesca Theokli commented: “Our study showed more than two thirds believe companies are not transparent enough about where their food is grown and produced.

"So we wanted to create this crop circle to highlight our ongoing commitment to locally sourcing the highest quality wheat from a 50 mile radius of our home in Burton Latimer, Northamptonshire and help consumers make an informed choice when selecting what to have for breakfast.

"There are many ways Brits can support local farmers and being careful about where breakfast is sourced is one simple step."