A TEEN is facing charges for making a terroristic threat after she posted a series of videos where she said she was going to willingly infect people with coronavirus.

Lorraine Maradiaga, 18, posted a a series of videos on social media that appear to show her going to get a coronavirus test, and then going around a store saying she's going to infect people with COVID-19. 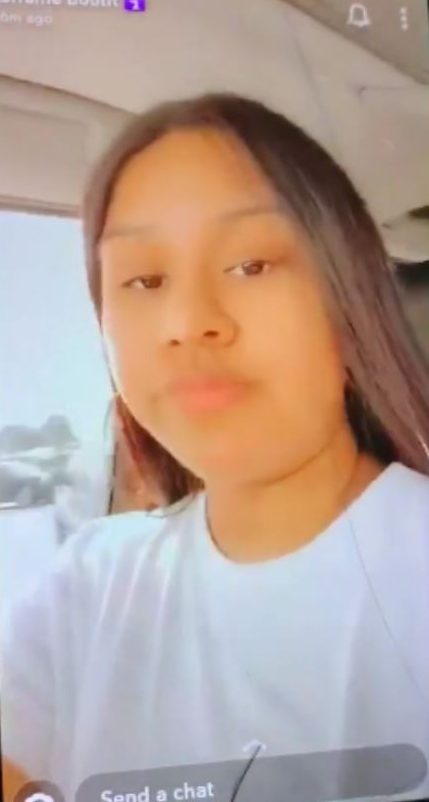 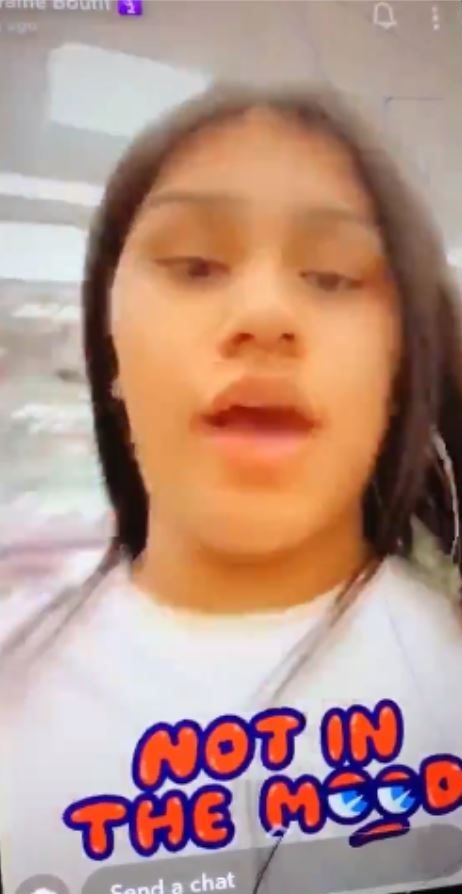 One video shows the teen going through what appears to be a drive-through testing site.

A nurse tells the teen to go home and await test results.

However, in a later series of videos, the woman goes to a store she says is Walmart, as she says she is going to infect other people.

"I'm here at Walmart about to infest every (expletive), because if I'm going down, all you (expletive) are going down," she says in the video, as reported by KXAS.

In a separate video, she adds: "If you want to get the coronavirus and (expletive) die, call me."

"I'll meet you up and (cough, cough) and I will shorten your life," she says.

In another video, the teen says that she doesn't care if the videos are being screen recorded.

She says she "doesn't give a f**k" about people, and added her parents told her to stay home as well.

Carrollton, Texas police identified the woman in the videos as Maradiaga, and said they are charging her for the threats.

"We have identified the woman seen on social media claiming to be COVID-19 positive as 18-year-old Lorraine Maradiaga and are charging her with Terroristic Threat, Texas Penal Code 22.07," police said in a statement. 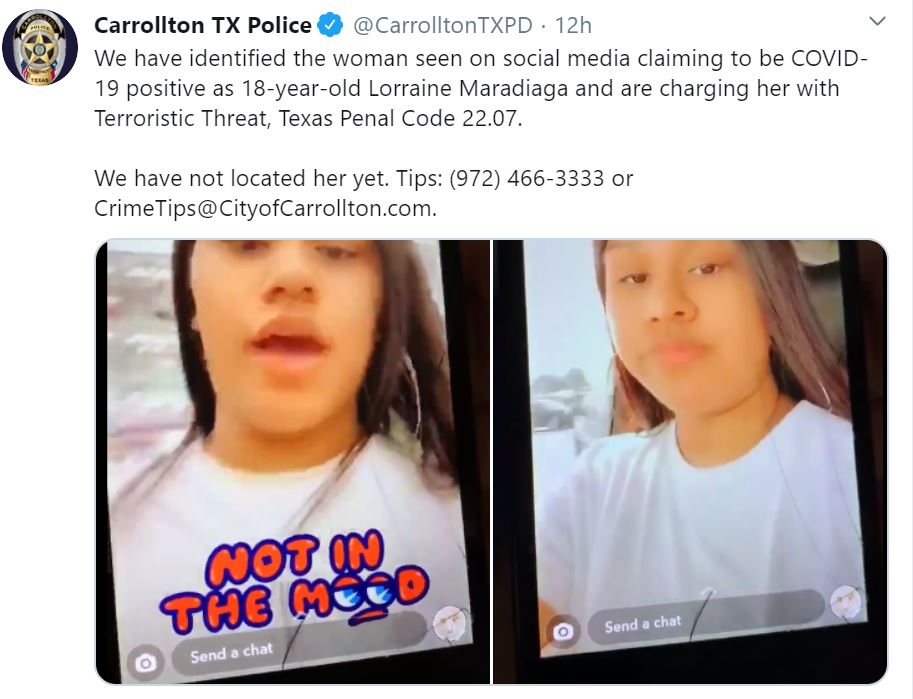 Cops said in a statement it's not known if the teen actually has the virus – but they say they are not taking the threat lightly.

"We have no confirmation Maradiaga is actually a threat to public health," police said.

"We are, however, taking her social media actions very seriously."

A spokesperson for the Carrollton Police told KXAS that cops went to Maradiaga's house on Sunday – but she was not there.

Police hope Maradiaga turns herself in, and said that her family is cooperating.

The video comes after Surgeon General Jerome Adams warned that this coming week will be one that will leave a lasting effect on the nation.

Coronavirus cases in the U.S. continue to climb, as the total passed 337,933 on Monday morning.

More than 9,653 people around the nation have died from the virus. 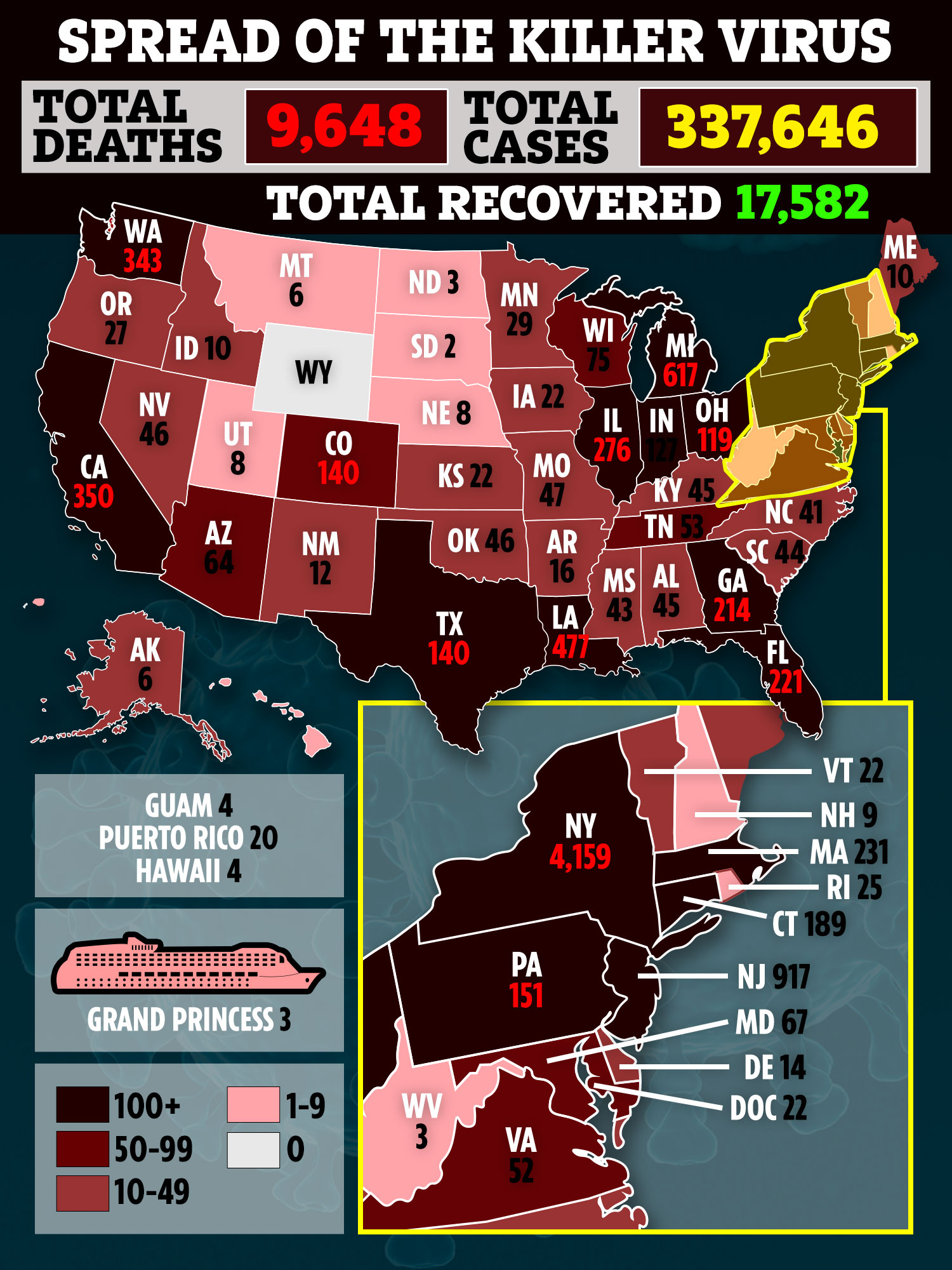 As New York City remains the virus epicenter, one tearful nurse shared she did a FaceTime call with the family member of someone who died from coronavirus so they could see their loved one for a last time.

"If we could do at least one thing to make this hard time for them a little [bit] easier, that’s what we’re going to do, no matter how crazy our day is and how much work we have to get done," Lisa Kilfeather, who works at Long Island Jewish Medical Center told Sky News.