Melburnians awoke to a much quieter city amid renewed restrictions on Wednesday. 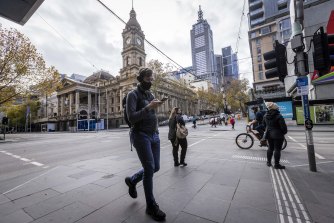 The number of pedestrians was down by almost half in some of the busiest parts of the city as new restrictions took effect.Credit:Wayne Taylor

“Unfortunately, this outbreak is likely to affect confidence levels and set back some of the recent promotional measures put in place to help drive workers and visitors back to the CBD,” Australian Retailers Association chief executive Paul Zahra said.

“Businesses in the CBD can expect a downturn in trade while the new restrictions are in place.

“There are less people out and about in the city with a large number of people working from home due to the mask mandate in indoor venues. With reduced foot-traffic in the city, impacts to sales are inevitable.”

While the government in March issued a new policy decreeing public sector workers should return to their offices three days a week as a “default”, some departments have this week told staff they can work from home for the duration of restrictions.

Between 6am and 9am on Wednesday, City of Melbourne foot traffic sensors showed the number of pedestrians across the municipality had fallen by up to 40 per cent, compared with the past month’s average.

Pedestrian numbers were down 49.4 per cent across the city compared with pre-pandemic levels.

Foot traffic was also well down in Bourke Street Mall, one of the busiest locations for shoppers and visitors to the city, where pedestrian numbers were down almost 40 per cent.

Outside a quiet Flinders Street Station, just before lunchtime, jewellery wholesaler David Paterson had finished meeting with clients before heading to his Moorabbin office.

He predicted mask compliance inside workplaces would be a 60-40 proposition at best.

“Everyone I’ve just been in to see, as soon as they’re in the office, their masks are off,” he said. 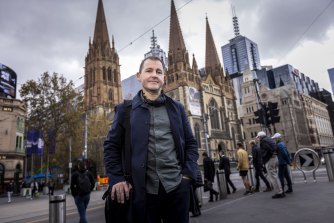 “I think people are wearing them, but they take them off the first chance they get.”

Paul Guerra, chief executive of the Victorian Chamber of Commerce and Industry, was thankful businesses had remained open despite the tightened restrictions.

That would have flow-on effects to city businesses, which rely on office workers for their customer base. “The city’s a lot emptier today than what it was yesterday.” 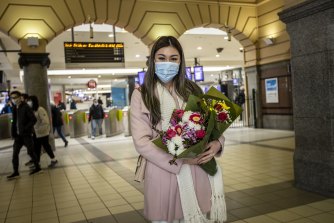 Beauty therapist Valerie Tra, who works in Collins Street, has worn a mask at work for months. But she said clients had begun cancelling their appointments almost immediately after news of the northern suburbs cluster broke.

“I feel like in the last couple of days, there’s less people [in the city] and there’s lots of cancellations at work anyway.”

“This unfolding situation is understandably causing anxiety and frustration for many Melburnians,” she said.

“We have surpassed this virus before and as a community we know what to do to slow the spread of the virus. If everyone does the right thing, the more likely it is that our city will stay open and that is absolutely critical for our economic recovery.”

Jennifer Burns, who is retired but learning both French and Vietnamese at a CBD language school, was bracing on Wednesday for further restrictions to be announced in coming days.

While she supported the masks requirement as an important public health measures, she wryly observed it would add a unique complexity to her studies, particularly of the intricate Vietnamese language.

“There’s 11 vowels … and each of those vowels has got six tones, so that’s 66 individual tones,” she laughed. 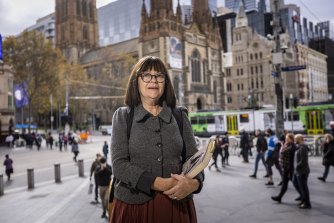 Jennifer Burns is learning a new language because her daughter-in-law is Vietnamese, but says masks will make that task harder.Credit:Wayne Taylor

“And you can just imagine trying to conquer all of that with a mask on.”

Criminal lawyer Rafael Aviles has been largely working from home during the pandemic, appearing via the online conferencing platform Webex for his Magistrates Court cases.

Mr Aviles, who was taking a rare trip into the CBD to meet with a client, predicted the outbreaks and restrictions would damage Melburnians’ confidence in returning to office work.

“I think we’ve all noticed the influx of people coming into the city and on the roads haven’t been as busy, so I think it does have an effect on the confidence of people,” he said. 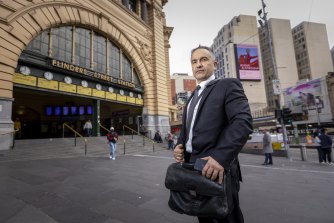 Mr Zahra said his members hoped Victorian health authorities could get on top of the latest outbreak quickly, to avoid the need for more severe restrictions.

“This week’s events highlight the critical importance of the vaccination rollout,” he said.

Stay across the most crucial developments related to the pandemic with information you can trust. Sign up to receive it weekly.