The family feud behind a $32 million T-Rex named Stan

The family feud behind $32million T-Rex ‘Stan’: Rock-star fossil hunter brothers who dug up the world’s most expensive dinosaur are locked in bitter battle as auction smashes records

The rock-star fossil hunter brothers who dug up the most expensive dinosaur bones in the world have been locked in a bitter dispute after a family fall out.

For years, legendary paleontologist brothers Peter and Neal Larson worked together on some of the most monumental fossil finds but tensions mounted several years ago when younger brother Neal called for a larger percentage of their business.

The escalating feud resulted in Peter, 68, firing his 65-year-old brother and Neal filing a lawsuit in retaliation, according to a report from the Wall Street Journal.

The suit lead to a deal in which the brothers would split their assets with Neal acquiring their star find, the T-Rex Stan, thought to be worth between $6million to $8million.

Yet earlier this month, Stan smashed all fossil sale records at auction, selling for a massive $32million and leaving the brothers’ feud even more tense. 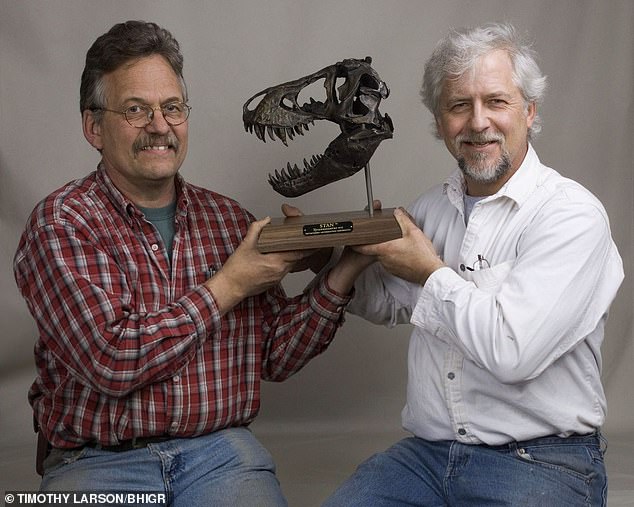 Legendary paleontologists Peter Larson, left, and his younger brother Neal Larson engaged in a family feud that became more bitter after their prized discovery, a T-Rex named Stan, sold for $32million on October 6. Pictured in 2007 holding a miniature bronze cast of Stan’s skull 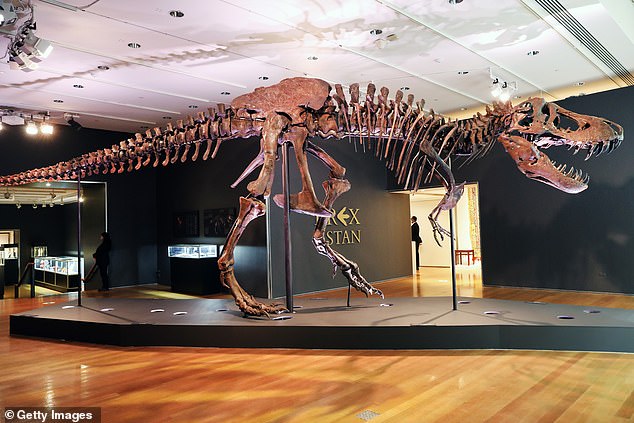 Stan became the world’s most expensive dinosaur earlier this month when it sold for $32million to an unknown buyer Pictured, the fossil at Christie’s auction house in September

The Larsons first dug up the 40-foot-long Tyrannosaurus rex from the South Dakota soil 28 years ago and it went on to become the main money-earner for their Black Hills Institute of Geological Research in Hill City.

Their 1992 discovery changed the way scientists thought about the dinosaur and had an incredibly well-preserved skull that could be used to make casts other institutes could use for research.

The brothers were able to sell more than 60 Stan casts for $100,000 apiece over the years and also ran a Rent-a-Rex program which allowed people to borrow Stan casts for $20,000 a month.

Money from these sales were generally reinvested into further digs and so cash shortfalls at the company were not uncommon.

Since the 1970s, the brothers worked together, excavating 11 T-rexes and thousands of specimens as they built one of the West’s first fossil-hunting enterprises, the WSJ reports.

They traveled between different sites to excavate, asking landowners for permission and often paying a fee to do so.

They are also famed for excavating the T-Rex known as Sue which is held in the Field’s Museum in Chicago.

Sue was previously the priciest fossil sold, going for $8.4million. 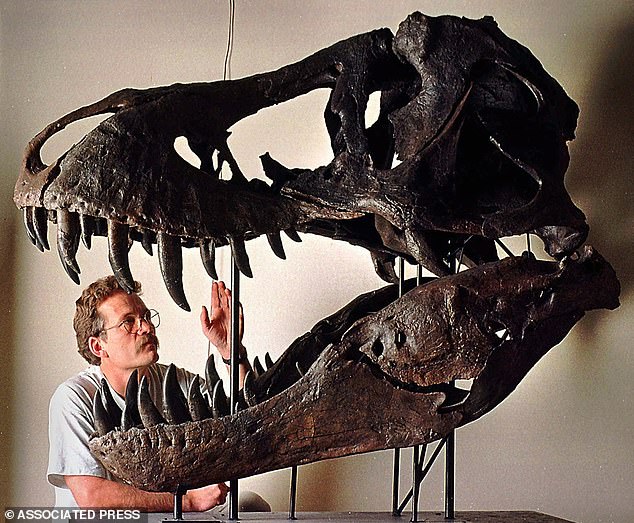 Peter Larson pictured with the skull of Stan in the 1990s 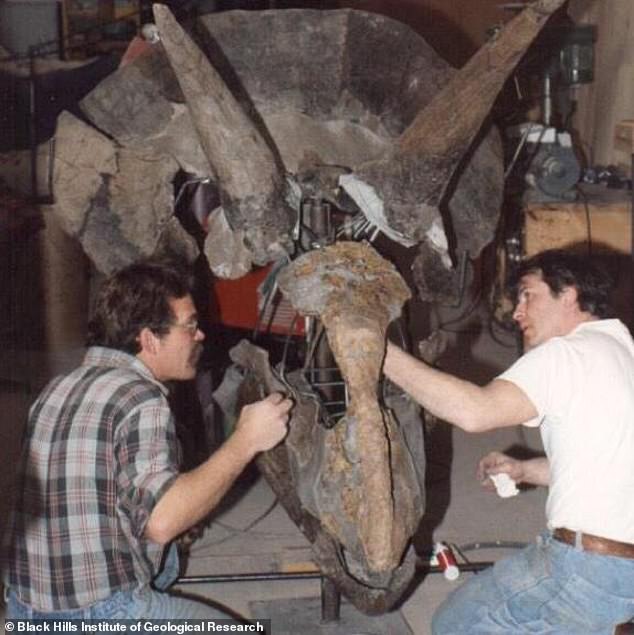 The Larson brothers were once inseparable in their work, as pictured above

When the brothers discovered Stan they had been inseparable, but tensions were mounting for years thanks to younger brother Neal’s eagerness to prove himself, as well as other disputes.

‘Watching two brilliant people not be able to get along is so sad, but that’s also human nature. We’re an unusual species.’

The tensions first arose as Neal felt competitive toward his older brother.

Peter transformed his small mineral shop into a fossil-hunting partnership, giving himself 60 percent of the company, Neal 35 percent and another partner, Bob Farrar, 5 percent.

The older Larson drew larger crowds at shows and when Neal asked him for a larger stake in the business, he was turned down.

‘I was always trying to prove to everyone that I was as good as Pete,’ Neal said.

In the mid-1990s, their forced sale of Sue added further to the disagreement.

While the brothers dug up the bones, they had to hand them over to a local ranger who then sold them at Sotheby’s. 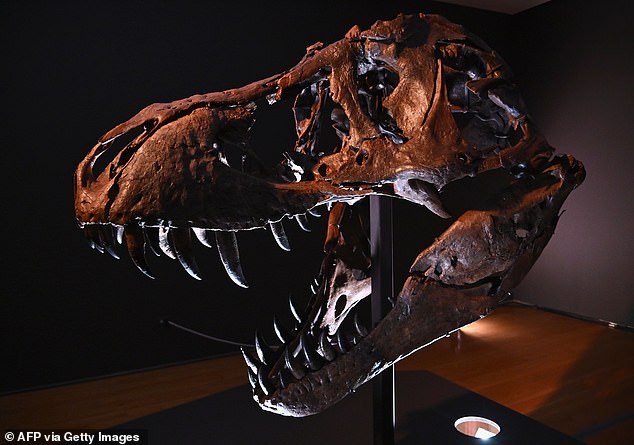 ‘The trauma from that older case still grates on this family, and I think it exacerbated any existing cracks,’ said Kristin Donnan, Peter’s former wife. ‘Stan did what Sue couldn’t do: It broke up the family.’

It wasn’t until eight years ago, however, that the conflict fully came out into the open, and Peter suspended and then fired Neal.

The reasons for the firing are not clear and neither brother agrees on what happened.

Neal told the WSJ is was ‘blindsided and hurt’ by the firing while Peter said he was simple ‘done’.

In 2015, Neal filed the lawsuit that claimed he had been oppressed as a share holder in the firing.

He wanted to liquidate the company to get his 35 percent share and a judge agreed that his rights had been violated.

It took several years more until the Stan arrangement was agreed.

The brothers had hoped that Stan would always stay with them but without enough cash available to buy Neal out, he took the fossil to sell. 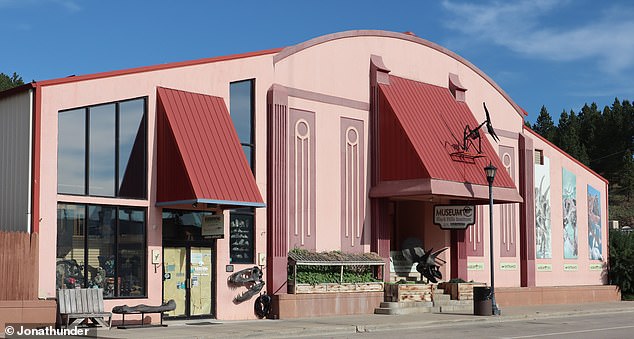 The Black Hills Museum of Natural History in Hill City, South Dakota, owned by the Larsons

‘As kids, we had a dream of starting a museum and Stan was always meant to stay with us,’ he said, but added that he needed to pay his bills.

A circuit court judge had also hoped that it would finally settle the complex ownership dispute between them.

Peter agreed it felt like a ‘solution’ to the problem as he was to still keep the copyright and trademark to Stan so the institute could still keep making money with the casts.

The deal was intended to be financially equal, with Neal keeping the proceeds of the sale of Stan, and Peter keeping the the institute, with its 100,000-plus fossils and 5,000-square-foot private museum, which had been valued at roughly $5 million.

Yet, the T-Rex eventually sold for four times the estimated price during the Christie’s 20-monute bidding war on October 6, showing a thriving market for fossils despite the pandemic.

‘That’s more than we’ve grossed in the entire history of our business,’ Peter told the WSJ.

His new owners remain unknown but is speculated to be a private buyer outside of the US.

‘If you noticed, it was sold on the London desk,’ Mark Norell, a paleontologist at the American Museum of Natural History, told the New York Times of the auction. ‘That usually means it’s Middle Eastern money, and I know for a fact that there was Middle Eastern interest in the fossil.’

The sale has also angered other paleontologists as scientific institutions do not have the funs to complete with that kind of private buyer.

‘I figured they might still dislike each other, but there’s no way they’ll ever get over this,’ said Mark Norell, chair of paleontology at the American Museum of Natural History.

The brothers revealed they have seen each other since the sale as they live less than two miles apart but have still not spoken.

Peter said that he is now focusing on restructuring the institute so that ‘something horrible like this never happens again’.

Yet he says that he couldn’t help root for Stan once the auction started breaking records.