Traditional owners fighting to protect thousands of trees along the Western Highway are taking the federal Environment Minister to court for a third time in a move that threatens to further delay the road project, which is already running two years late.

The Andrews government is pushing ahead with work on the $157 million highway duplication between Buangor and Ararat, north-west of Melbourne, resisting calls for them to wait until the court case is resolved. 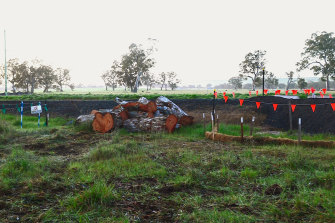 Trees were felled along the Western Highway, as the state government resisted traditional owner calls for works to halt until an upcoming court case is resolved.

Construction crews have marked several trees in red paint to identify which will be felled, as they advance towards centuries-old trees considered sacred by the Djab Wurrung.

Workers are within kilometres of the "Directions Tree" — a towering yellow-box with a distinctive serpent-like swirl on its trunk – and even closer to a 700-year-old eucalypt "Grandfather" tree.

These trees have been fiercely guarded by the Djab Wurrung Embassy and hundreds of supporters since mid-2018, with protesters staring down police efforts to carry out eviction orders on several occasions. 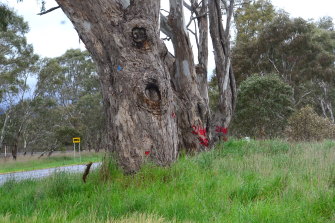 Trees marked with red paint along the Western Highway that are set for the chop, as the state government resists calls from traditional owners for works to halt until an upcoming court case is resolved.

The Djab Wurrung have filed proceedings in the Federal Court, requesting a review of federal Environment Minister Sussan Ley’s approval for the project in August.

This is the third time the traditional owners have requested a judicial review of an environmental minister’s approval following two earlier successful bids.

Ms Ley was forced to review her decision and in August gave the project another tick of approval — a decision the Djab Wurrung are challenging in court, with hearings scheduled for December. The traditional owners want to protect thousands of trees and all vegetation along the 12½-kilometre highway duplication route. 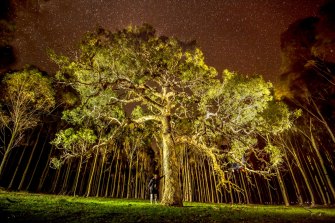 Zellanach Djab Mara next to the Directions Tree, which is set to be chopped to widen the highway. This tree has not yet been cut down.Credit:Justin McManus

"Here in Victoria, it's no better," Ms Onus said. "I'm sick of our cultural heritage being destroyed."

"There are very few left of these trees due to bad farming practices, tree clearance and roads.

"We’ve shown them a better way to do this and they're not listening to us," Ms Onus said of the government. "They’re being bloody-minded, as far as I’m concerned." 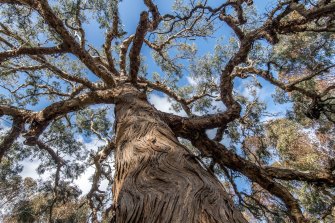 The Djab Wurrung call this ancient Indigenous tree the Directions Tree, which they believe grew from a seed and the placenta of their ancestor many centuries ago. It is set to be chopped down, but this has not yet occurred. Credit:Justin McManus

Lawyer for the Djab Wurrung, Michael Kennedy, has sought a moratorium from the federal Department of Agriculture, Water and Environment until the court case is resolved.

He also applied for an emergency declaration for protection of the area under the federal Aboriginal heritage protection act.

When asked why Ms Ley continued approving the project despite mounting concern about sacred Aboriginal trees, Mr Kennedy said: "The Commonwealth is funding 66 per cent of the cost of this project, so she [Ms Ley] may be guided by that.

"We say this money has been badly spent."

The state government has issued a warning to the handful of protesters who remain on site, saying it was now time for them to leave.

A spokesman for Major Road Projects Victoria said: "The project's design has been approved by both relevant traditional owner groups, an independent Environmental Effects Statement process, the Supreme Court, the federal Environment Minister and the Victorian Ombudsman — it's time for the handful of protesters that remain on the site to dismantle their camp and allow us to get on with the urgently needed safety upgrade."

Planning for the duplication of the single-lane truck route between Melbourne and Adelaide started 12 years ago, but construction has been delayed by two years and the project faces a $60 million cost blowout, following a wave of legal challenges — pursued separately by private landowners and traditional owners — ongoing protests and a number of Federal Court-imposed injunctions. 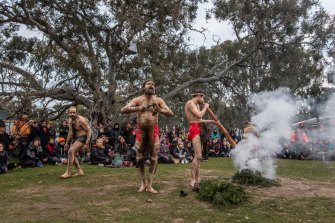 Dancers performing ceremony in front of the Grandfather tree at Djab Wurrung Embassy camp, which is set to be cut down. This has not yet occurred.Credit:Justin McManus

Last year the Andrews government agreed to change the road's design to spare 16 of the 22 trees identified as culturally significant by the Eastern Maar Aboriginal Corporation, including two "birthing trees".

Sisters MairiAnne and Iona Mackenzie, whose land was compulsorily acquired for the project, lost their case against the government over the road in the Supreme Court last month.

The Victorian Ombudsman found in a recent audit that the government agencies overseeing the project consulted in good faith while carrying out negotiations with traditional owner groups. 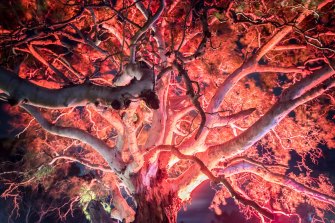 The “Grandfather” tree at the Djab Wurrung Embassy camp, which is set to be cut down. This has not yet occurred. Credit:Justin McManus

A spokesman for Ms Ley said it was not appropriate to comment on any new legal proceedings.

Djab Wurrung traditional owners have been custodians of their country for more than 12,500 years.

In the late 1850s a road was built between Buangor and the gold diggings in Ararat, which became the Western Highway.