Thousands of people across UK join in to applaud NHS

Poorly looking Boris Johnson takes to his doorstep from coronavirus quarantine in Downing Street as he joins thousands of people across UK clapping, cheering and setting off fireworks to applaud the NHS and keyworkers for second week in a row

A sickly-looking Boris Johnson tonight took to his doorstep amid his coronavirus quarantine in Downing Street to applaud NHS workers up and down the country.

Stepping out in a suit, the Prime Minister made sure he showed his support after he himself was forced to self-isolate after he tested positive for the coronavirus last Friday. Downing Street today said he would be coming out of self-isolation tomorrow.

Britons also flocked to their doorways, balconies, gardens and windows to give a heartwarming round of applause as the country came together for the NHS.

People up and down the country joined in for the Clap For Carers campaign this evening at 8pm, with many seen cheering and voicing their gratitude for the workers who have been dealing with the coronavirus fight.

The Clap For Carers campaign, which started online, has been staged because ‘during these unprecedented times they need to know we are grateful’, the organisers said.

It follows similar moves in Italy and Spain – which have the world’s highest death tolls – which created astonishing scenes over the last month as they applauded from terraces in the countries’ cities.

This is while in New York, many people have made the clapping part of their every day routines, with social media videos showing people clapping every night at 7pm local time for key workers.

Tonight the tip of the Shard in London was also lit up in blue as were the arches at Wembley. Kensington Palace also released a statement thanking the workers. 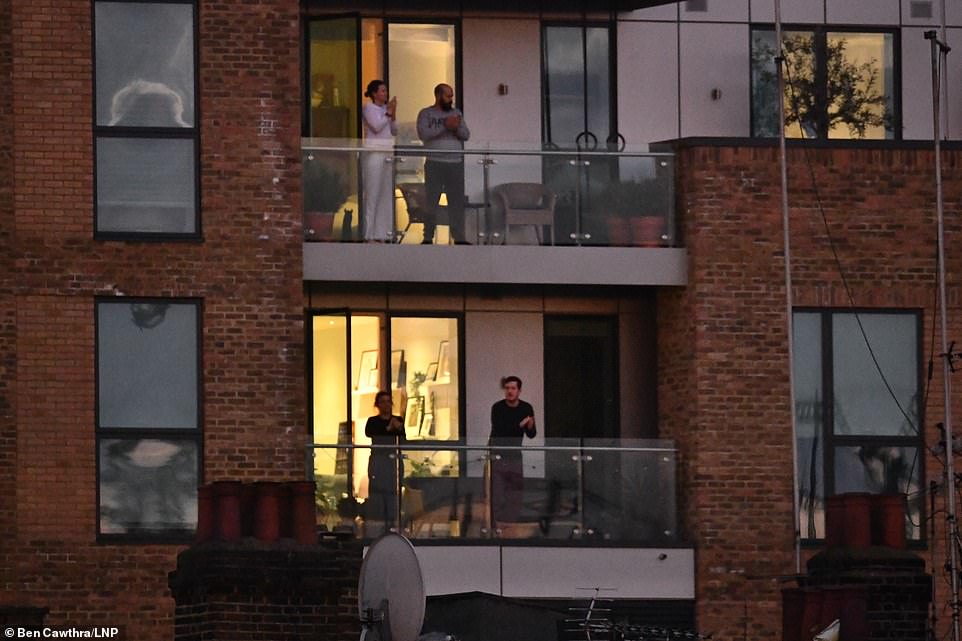 Members of the public in Kensal Green, North West London take part in Clap For Our Carers by applauding NHS workers, carers and key workers from their windows, balconies and doorsteps 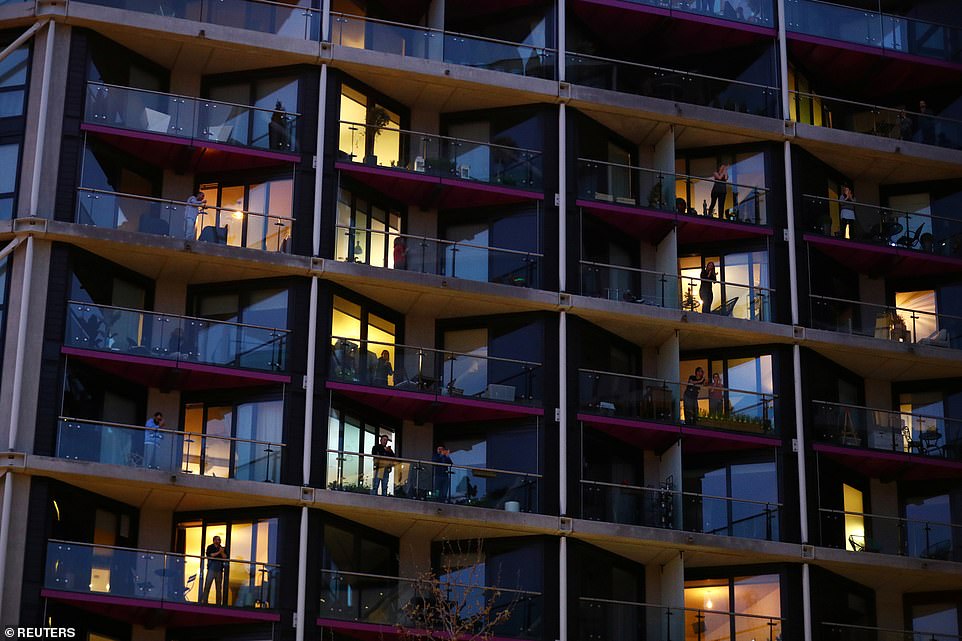 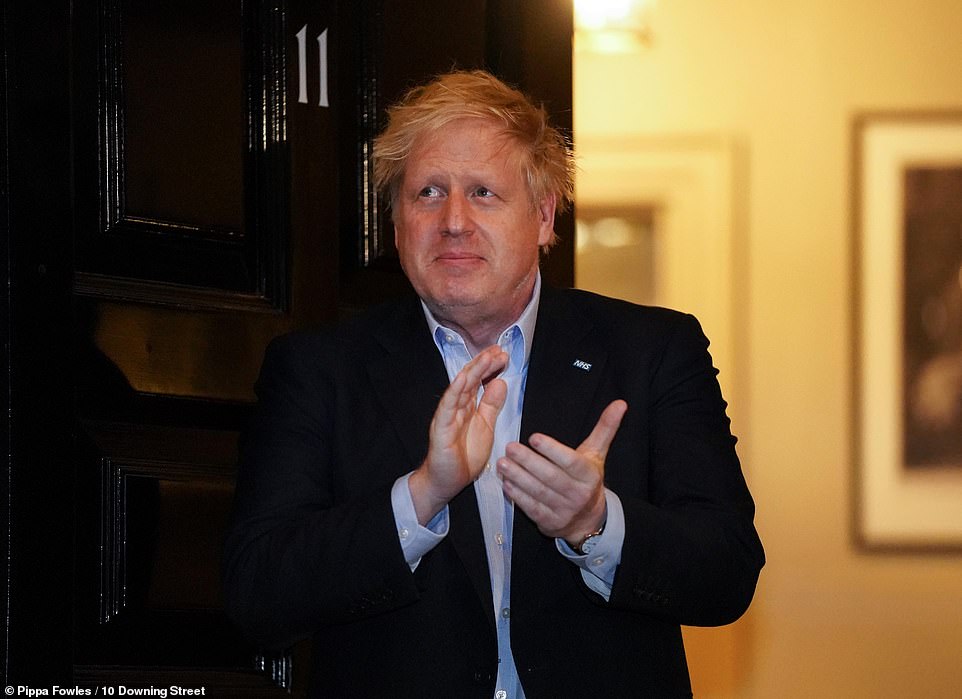 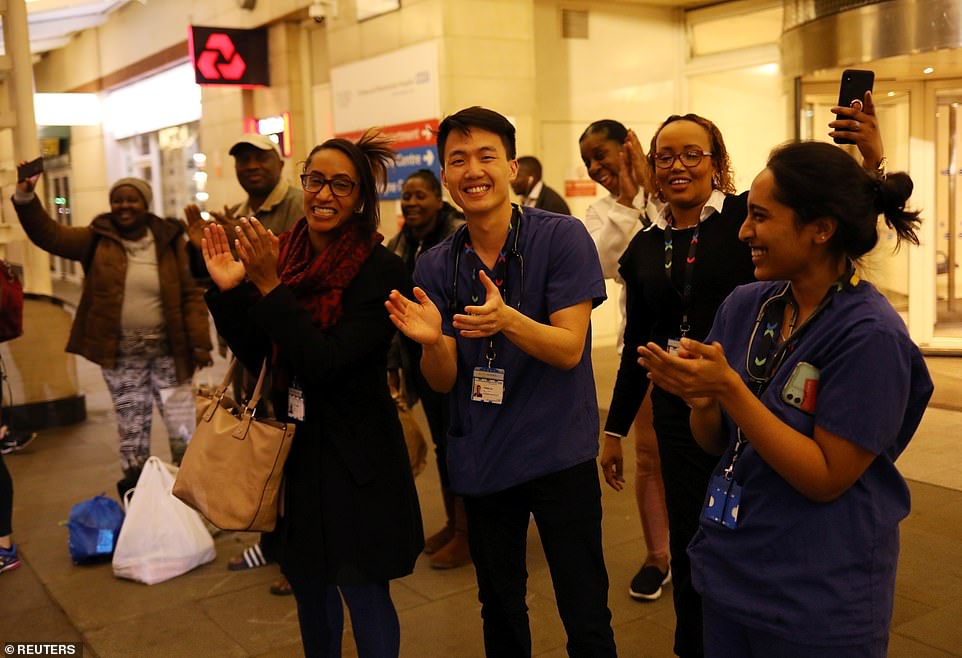 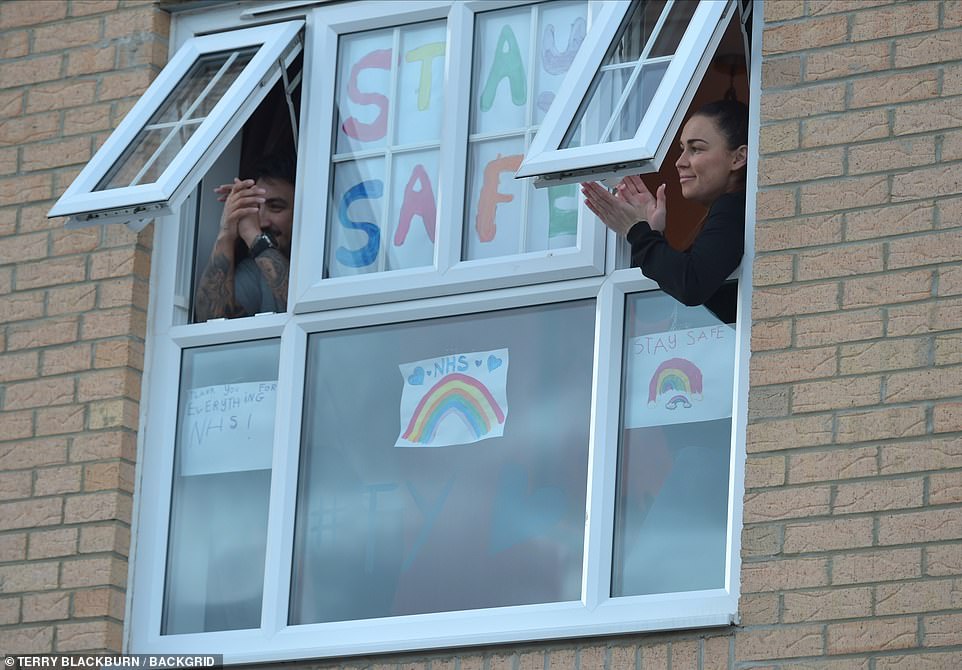 People in Stockton, Teesside joining in for the national clap to recognise the work of our NHS Staff and Careers. This couple were seen in their window where they had placed pictures for the NHS 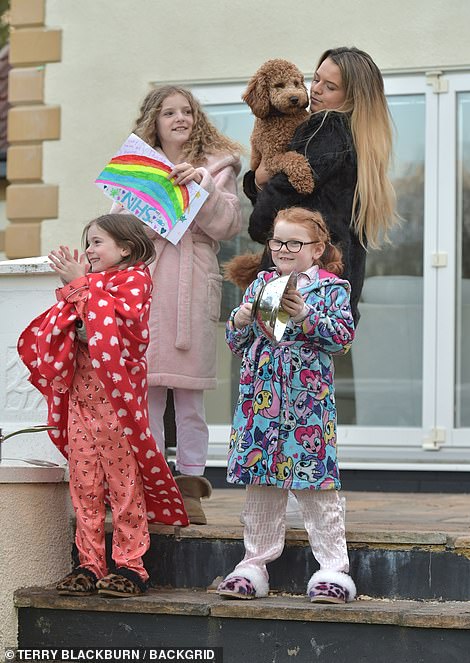 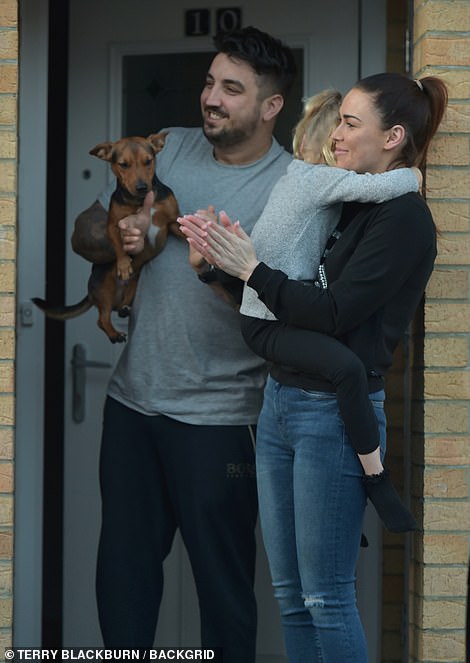 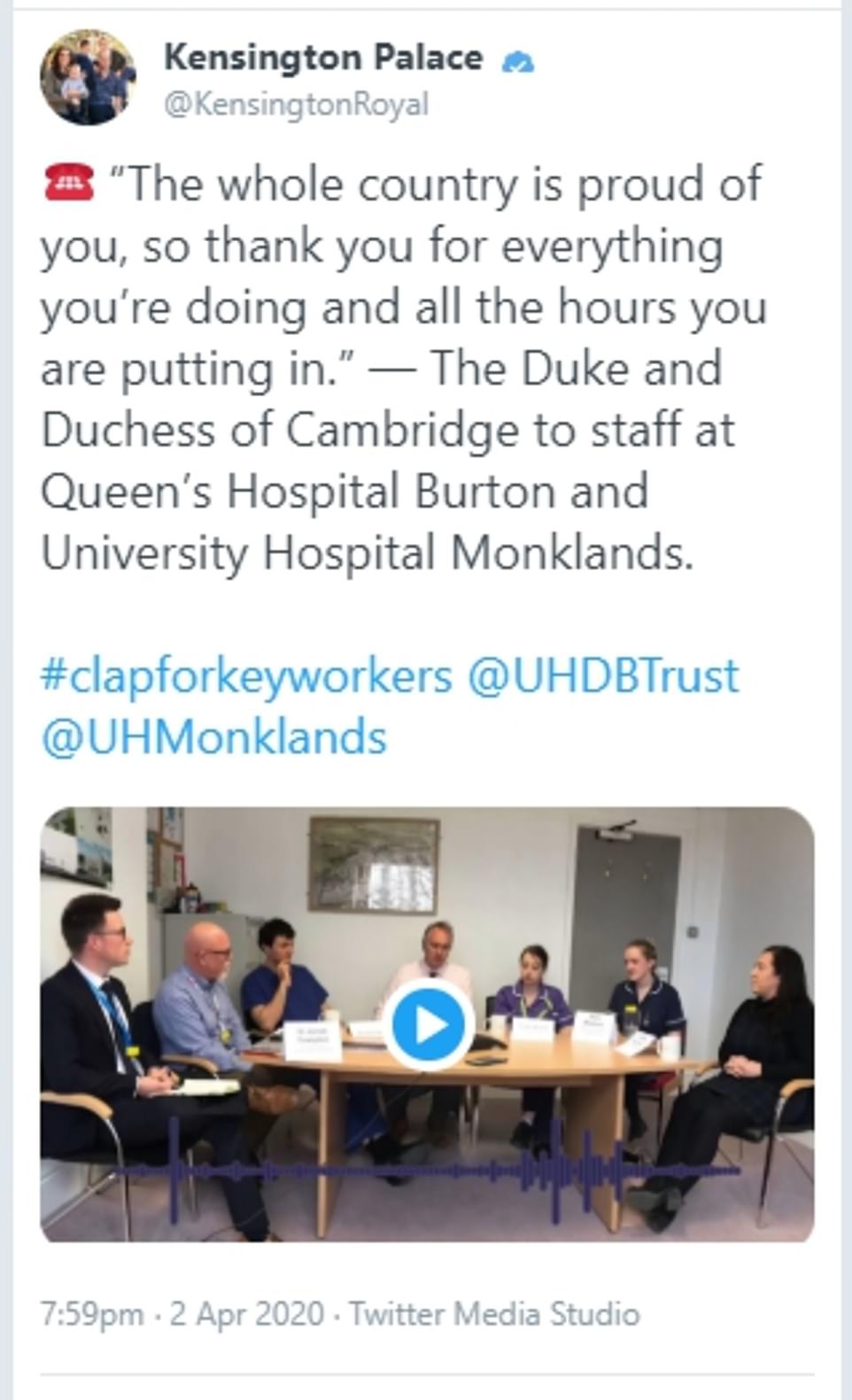 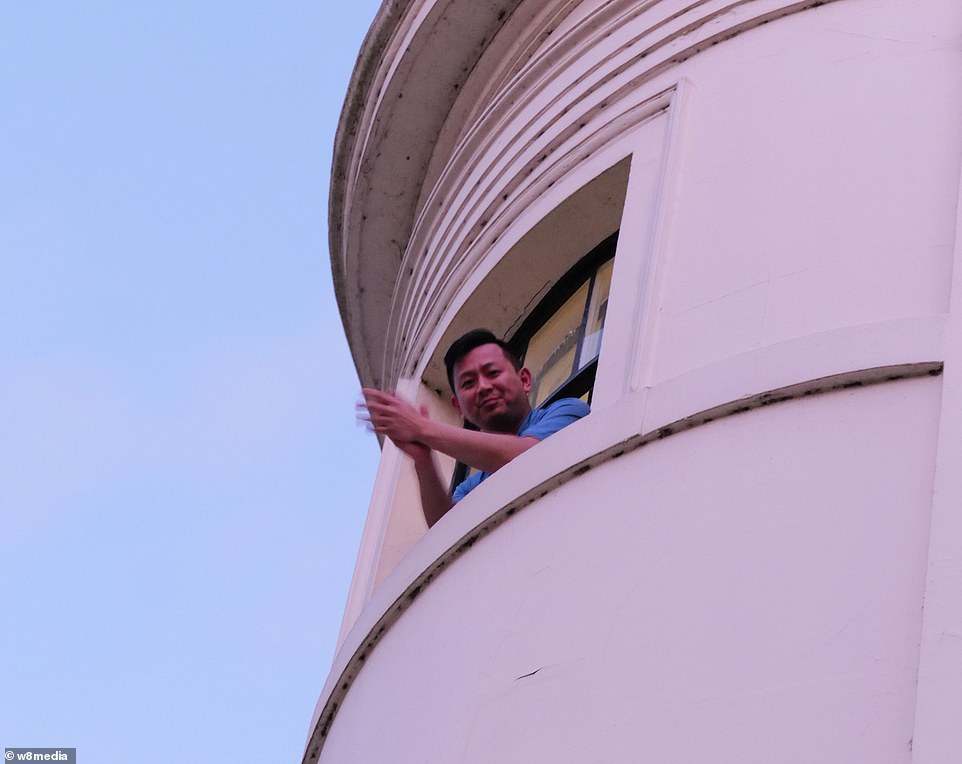 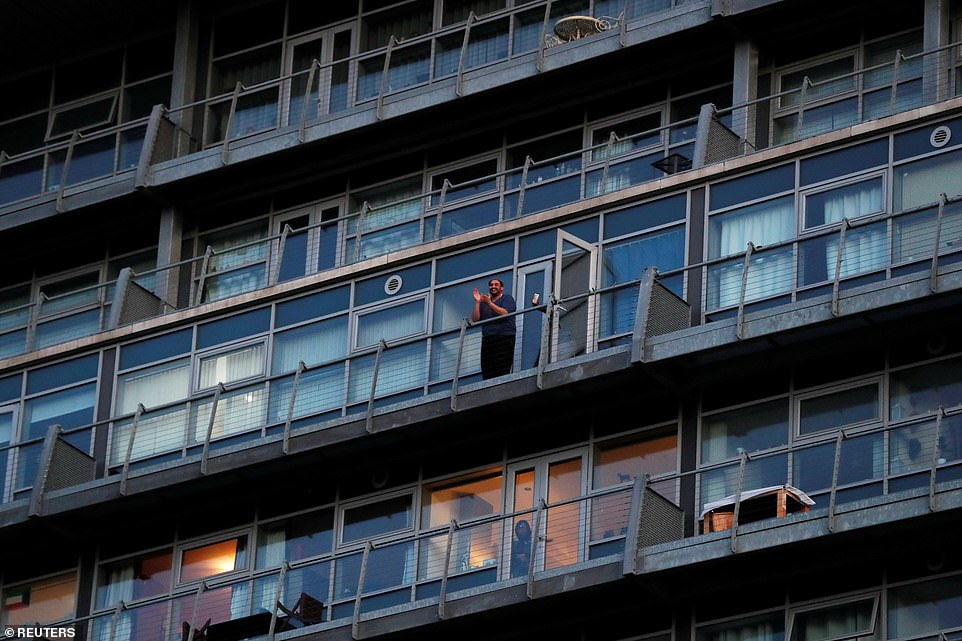 Just before the clapping started this evening Kensington Palace posted the below message to its Twitter page: ‘The whole country is proud of you, so thank you for everything you’re doing and all the hours you are putting in.’ — The Duke and Duchess of Cambridge to staff at Queen’s Hospital Burton and University Hospital Monklands’.

Prime Minister Boris Johnson also opened to door at Number 11 this evening and emerged to show his support for key workers.

Last week Britons were praised by NHS workers after many took time out of their evenings in isolation to say thank you to those workers who are risking their lives day in day out for others who have been struck down by the coronavirus.

So far in the UK 2,921 people have died for the illness and there have now been over 33,000 confirmed cases up and down the country.

People were seen up and down the country and NHS workers tonight took a small break from their duties at Chelsea and Westminster Hospital in London to enjoy the round of applause and to also clap for their colleagues working alongside them.

Doctors, nurses and other healthcare professionals from the hospital were seen outside in their scrubs and uniforms, smiling as they joined in with the campaign.

Broadcaster ITV said it would pause programming tonight in order to encourage the nation to open their windows and doors and clap for the carers.

As normal programming ceased it displayed messages to key workers up and down the country, encouraging others to donate to the NHS Charities Together Covid-19 fundraiser. 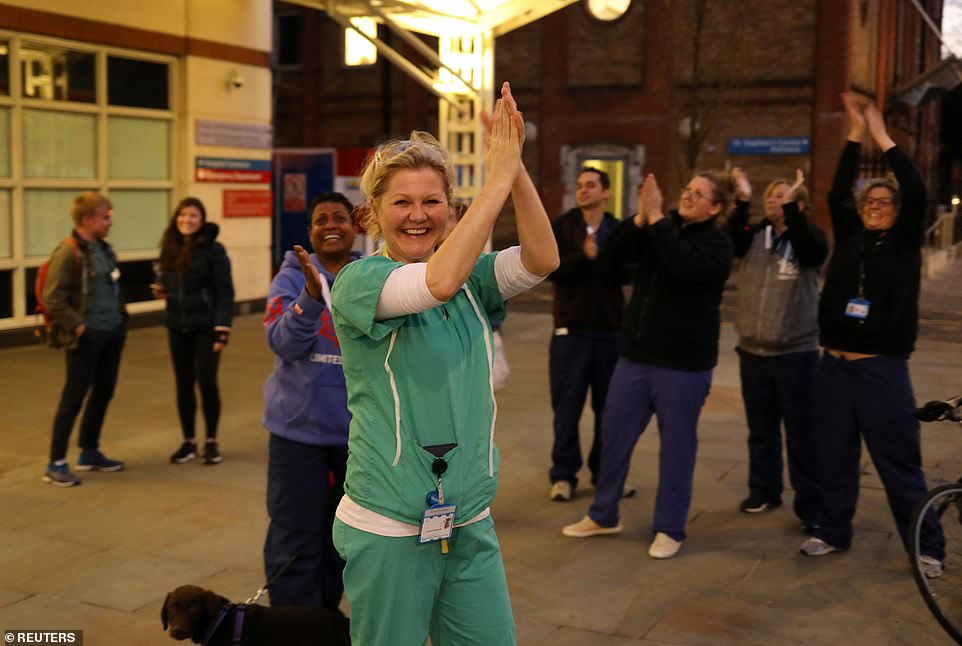 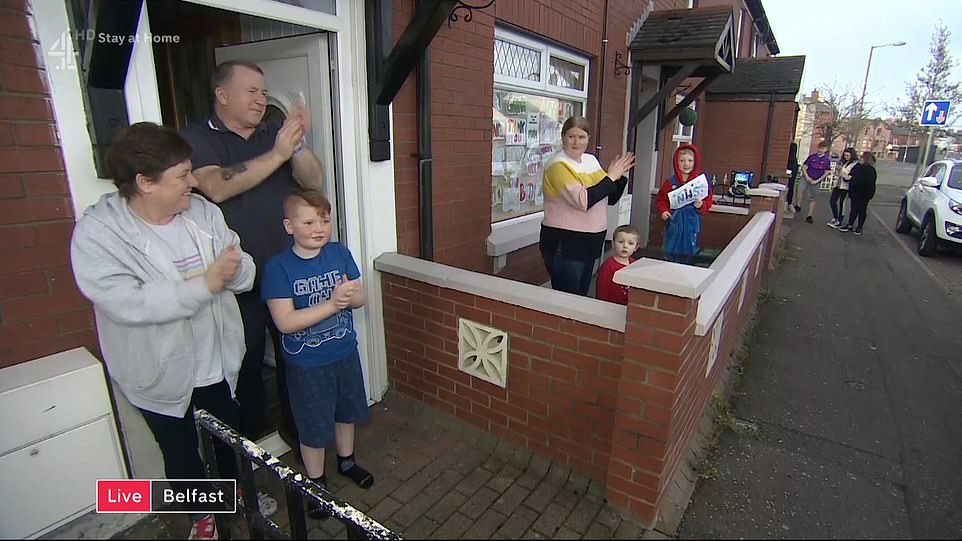 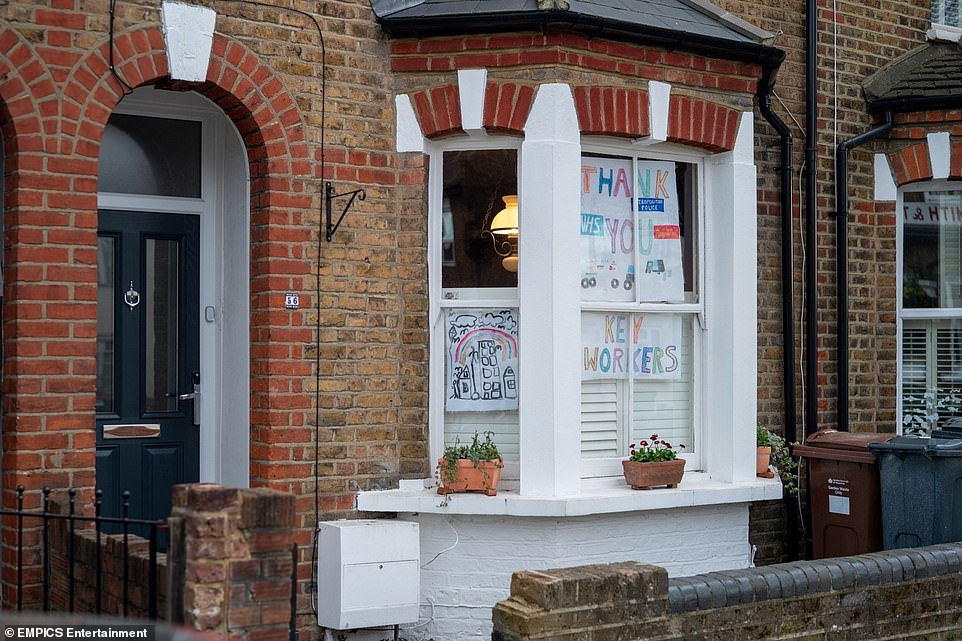 Signs in a street in Brentford in support of NHS staff and carers. This evening people from up and down the country came outside to thank key workers 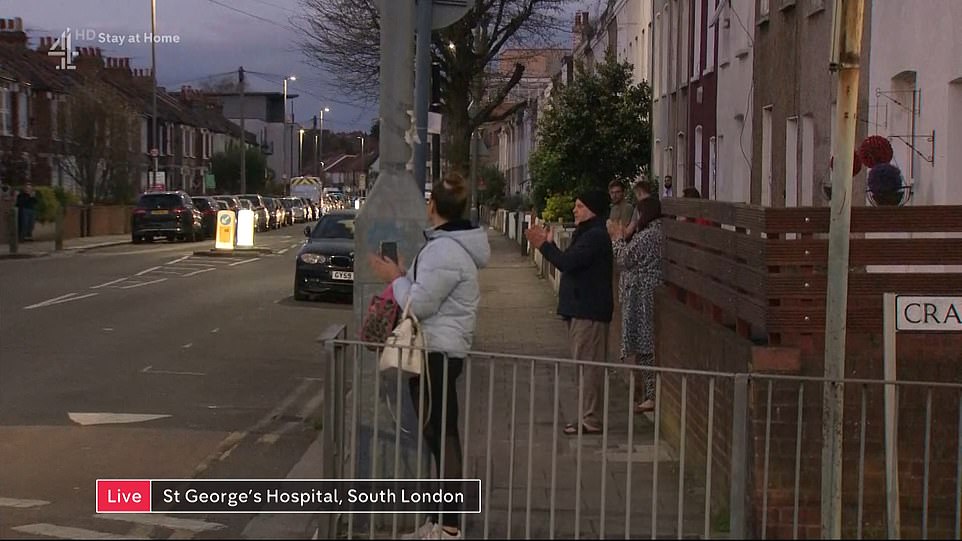 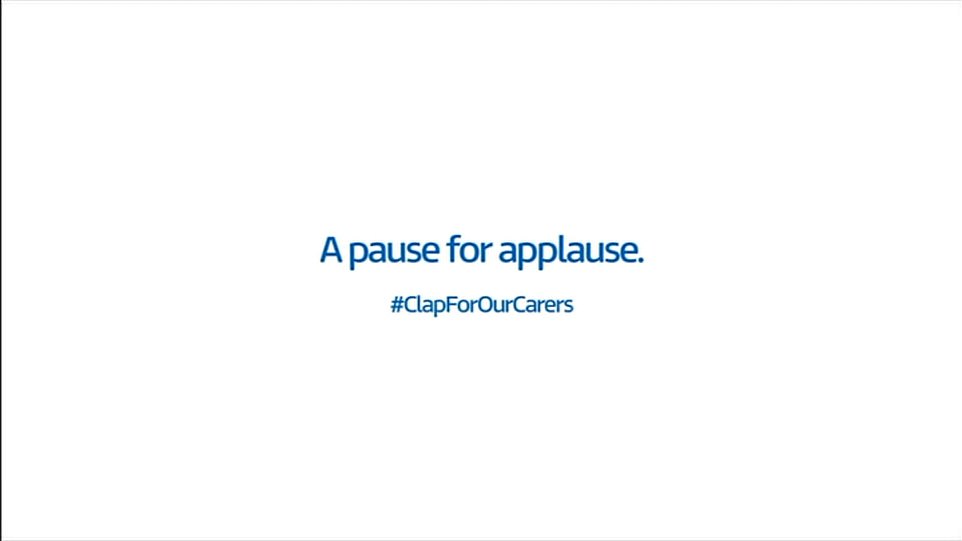 On another tumultuous day of coronavirus developments:

One healthcare worker tonight told Sky News that the campaign was also important to recognise not only doctors or nurses but also people like porters who work in the hospitals.

The money raised by the NHS Charities Together Covid-19 fundraiser will go towards providing well-being packages for NHS staff and volunteers.

It will also help provide items that have been requested by various NHS Charities in response to health care practitioners who are dealing with patients who have Covid-19.

Carolyn McCall, Chief Executive at ITV, said: ‘ITV is joining the rest of the country in thanking everyone in the NHS and carers who are doing such a vital and fantastic role – so we will pause our programming at 8pm to applaud the heroes within the NHS for the remarkable efforts they are making, and raise as much money for NHS charities as we can thanks to our viewers’ generosity.’

This is while Annemarie Plas, creator of the Clap For Carers movement in the UK, said: ‘I am really delighted that ITV is backing the initiative to clap for all who there are out there taking care of us, and helping keep that Thursday 8pm moment alive.’

NHS Charities Together chief executive Ellie Orton said: ‘Joining the wonderful wave of support for the NHS to say a massive thank you together with Clap For Our Carers is already making such a difference and today, and because of the brilliant British people, we have already raised nearly £17 million for our Covid-19 Urgent Appeal.

‘Now with ITV’s generosity to give free air time to remind everyone of the opportunity to express their love and thanks and to also give back, we are even more grateful so thank you.

‘We are distributing funds to over 140 NHS charities who are the legal way that the NHS receives, holds and spends charitable funds.

‘These funds are above and beyond the funds that the Government has provided and together we help provide the very best care for NHS patients.’

Clap For Carers is also part of the #lightitblue campaign which has been organised by members of the events and entertainment industry as a way to say thank you. Last week major landmarks such as Blackpool Tower and Wembley Stadium lit up blue to thank the NHS.

Tonight marks the second night Britons have clapped for carers and it comes after health secretary Matt Hancock declared the UK will be conducting 100,000 coronavirus tests a day by the end of the month as finally signalled a U-turn on the UK screening regime. 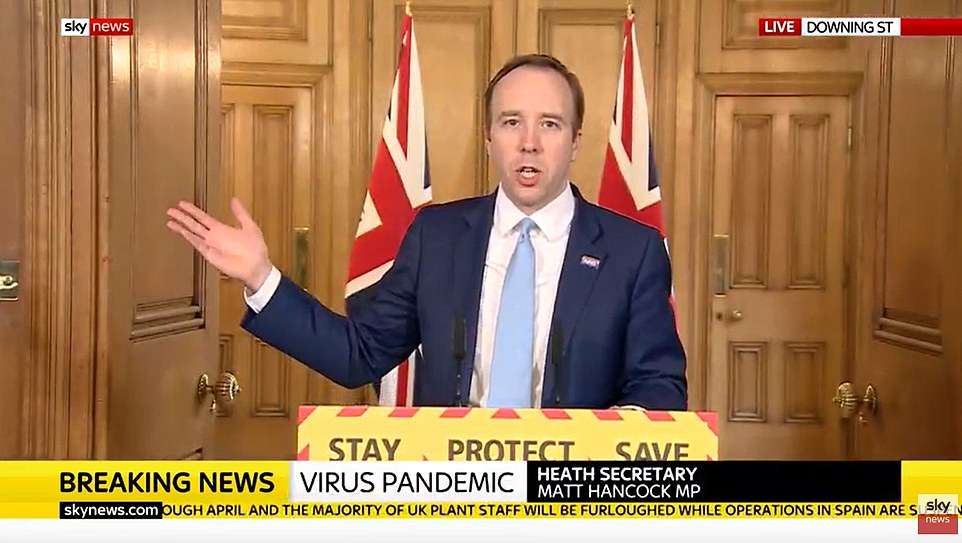 Emerging for the first time since being struck down by the disease himself, the Health Secretary said he ‘gets’ why there has been criticism as he abandoned the previous centralised approach and urged the wider science industry to help boost capacity.

Defending the government’s response, a querulous and at times emotional Mr Hancock said that Public Health England had been ‘working round the clock’ and could be ‘proud’ of what it had done.

Taking the press briefing in No10 this evening after a week in isolation recovering from the virus, he listed five ‘pillars’ for the new strategy.

Swab tests at PHE labs will be increased dramatically to 25,000 a day; research institutions and private sector firms like Boots and Amazon will be brought into the screening system; antibody tests will be introduced if they can be proved effective; community testing will be bolstered; and the overall UK diagnostics industry will be enlarged.

Mr Hancock rejected comparisons with huge testing numbers in Germany, saying the UK was building from a ‘lower base’ when it came to biotech capacity.

He said some of the prototype tests he was being urged to buy had failed trials. One missed three out of four cases, he said.

But he admitted that even with his new ‘five point plan’ testing capacity will not hit 100,000 per day until the end of the month – by which point he guaranteed that all frontline NHS staff will have access to checks.