Victoria's top public servant said he doesn't know who made the decision to use private security in Victoria's ill-fated hotel quarantine program.

Department of Premier and Cabinet Secretary Chris Eccles told the state inquiry into the program this morning he was unaware how it came to be that private security was deployed as the first line of security inside the hotels over police or the Defence troops. 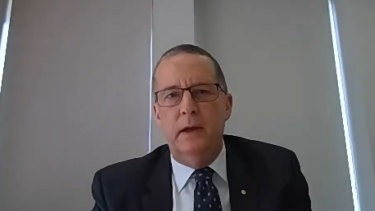 Chris Eccles, Secretary, Department of Premier and Cabinet, gave evidence to the inquiry on Monday.

The decision to deploy private security over the Australian Defence Force or police is a critical issue before the inquiry.

More than 30 security guards ended up catching coronavirus from quarantined returned travellers while working in the hotels.

Mr Eccles said his first thoughts after he emerged from a meeting of National Cabinet on March 27, in which the decision to enforce mandatory quarantine of international arrivals was made, was to deal with a "need for hotels and a need for people with deep logistical experience".

The inquiry has heard the view that hotel quarantine in Victoria was more of a logistics and accommodation program, rather than having a health focus, permeated throughout the scheme and potentially resulted in a lack of clarity and processes around infection control.

Mr Eccles told the inquiry this morning that he didn't contemplate enforcement of mandatory quarantine until Victorian Services Board meeting on March 27 at 4.30pm.

At the Board's meeting was then Chief Commissioner Graham Ashton and the heads of the departments, including the Jobs Department, who understood from Mr Eccles after National Cabinet that it was their job to source the hotels as the first priority.

Notes of the VSB meeting were shown to the inquiry.

Next to the letters GA [Graham Ashton] the notes read: "ADF will be assisting in spot-checking processes from what the PM and the Premier confirmed…we're trying to keep the ADF presence back of house – to prevent the ADF presence obvious to the community etc" and "police wont [sic] guard but will be doing the checks?"

Mr Eccles said he couldn't recall the discussions in VSB and said the note "could be as high or as low as me making a deduction based on the narrative through the VSB at that point rather than me drawing a conclusion that there will inevitably be a role for private security."

He also couldn't remember if his department had any involvement in providing advice about who would be enforcing quarantine.

Text messages between a top public servant and an emergency services boss revealed the role of the Defence force was being considered before hotel quarantine started.

In the messages, shown to the inquiry on Monday morning, Emergency Management Commissioner Andrew Crisp texted Deputy Secretary of the Department and Premier and Cabinet Kate Houghton about 2pm on March 27: "Just wanted to update post national cabinet on use of ADF."

Ms Houghton, the second most powerful public servant in Victoria, texted Mr Crisp back: "Thanks – I think my Minister has some idea of ADF and that's what we're discussing with Graham Ashton [Chief Commissioner of Victoria Police] at the moment. Will call."

Related Posts:
World News
Trump rails against Supreme Court for extending ballot deadlines
Bond girl Naomie Harris & Idris Elba speak to Commonwealth youngsters to mark Black History Month for Prince's Trust
Trump ‘CANCELS plan to attend his election night party at his own DC hotel’ as polls put Biden well in front
'Tell my children I love them': Final words of mum killed in Nice terror attack
Thousands flock to Halloween parade in Wuhan, China
Recent Posts
This website uses cookies to improve your user experience and to provide you with advertisements that are relevant to your interests. By continuing to browse the site you are agreeing to our use of cookies.Ok