Facebook has banned the sharing or viewing of our news articles on its platform. For independent journalism straight from the source, download our app and sign up to our newsletters.

Washington: The Republican civil war over former President Donald Trump is far from over.

House Minority Leader Kevin McCarthy and Representative Liz Cheney briefly sparred at a news conference on Wednesday (US time) over Trump and his future role in the GOP.

Asked about Trump’s upcoming speech at the Conservative Political Action Committee convention in Orlando, Florida, McCarthy suggested he can’t wait for the return of the GOP’s most popular leader. 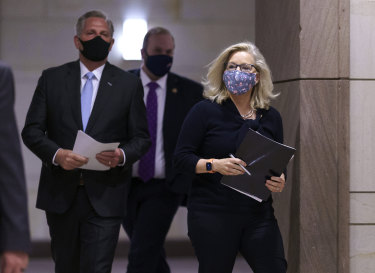 “Yes, he should [speak],” McCarthy said curtly, turning quickly away from the reporter who asked the question.

But the reporter interjected by asking Cheney if she agreed.

“That’s up to CPAC,” said Cheney, who voted to impeach Trump over his role in the January 6 storming of the Capitol.

“I don’t believe that he should be playing a role in the future of the party or the country.” 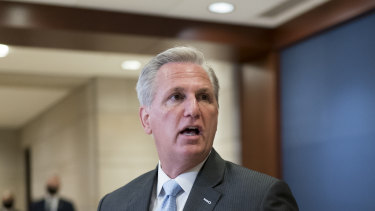 McCarthy fidgeted uncomfortably with his notes as Cheney, the No. 3 Republican in the House, spoke.

When she was done, there was a brief silence. Then McCarthy signalled he was done talking about the former president.

“On that high note, thank you,” said McCarthy as he turned on his heel and left.

The back-and-forth suggests that it may not be easy for Republicans to paper over their deep differences over Trump, especially as the former president returns to public life.

After briefly criticising Trump for his role in the January 6 attack, McCarthy and the vast majority of GOP lawmakers have returned to supporting him. That stance has been backed by polls showing most Republican voters still back the former president.

Despite swimming against the political tide, Cheney and a few other critics have shown no sign of backing down from their fierce criticism of Trump.

Trump plans to make a splashy political return when he delivers the speech at CPAC, where he will likely enjoy a rapturous reception.