Every Tory MP, councillor and member has been urged to sign up to the Great British September Clean.

The party’s co-chairman, Amanda Milling, has written to her 363 fellow MPs, more than 8,000 councillors and 180,000 members asking them to join the fight.

The party has also created a pledge card that those who back the scheme can share online.

The Mail and Keep Britain Tidy are encouraging businesses and the public to help pick up litter between September 11 and September 27. 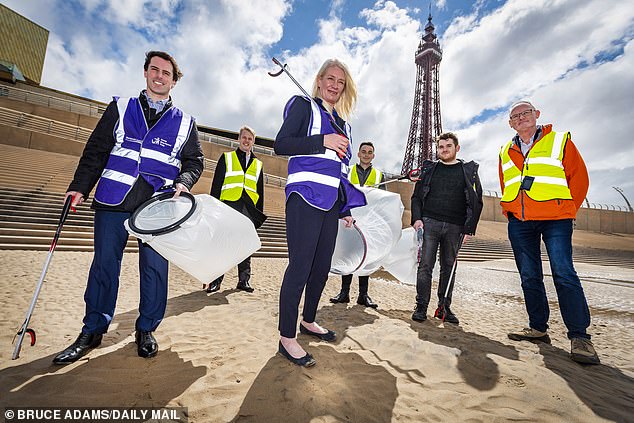 Amanda Milling, co-chairman of the Conservatives, has backed the campaign (pictured centre with MP Scott Benton, far left, and other Blackpool council staff and volunteers)

So far, the Prime Minister, leaders of the main parties in Westminster, big companies, and conservation groups have thrown their weight behind the campaign.

Yesterday, Miss Milling pledged her own support and vowed to take part in a socially-distanced litter pick in September. She said: ‘The Great British September Clean is a brilliant initiative that will improve the environment and our local communities.

‘Today I’m calling on the Conservative family to sign up to this fantastic campaign and get out in their communities and pick up litter. We all have a responsibility to clean up our country. The Conservative Party has a strong track record in tackling waste and protecting our environment for future generations.’

Miss Milling made the pledge as she took part in a litter pick on Blackpool beach, which saw a build-up of rubbish over lockdown. The MP for Cannock Chase was joined by local MP Scott Benton and activists who regularly hold litter picks in the area.

Her letter will say: ‘The greatest part of my job is getting to represent my communities in Cannock Chase, and as a Conservative member I know that, like me, you will also take pride in supporting and improving where you live.

‘In government, we have a proud history of tackling waste and protecting our environment for future generations, and this is your opportunity to directly support our work. We all have a responsibility to play our part, so I hope you will join me in supporting this campaign and keeping our beautiful country clean.’ 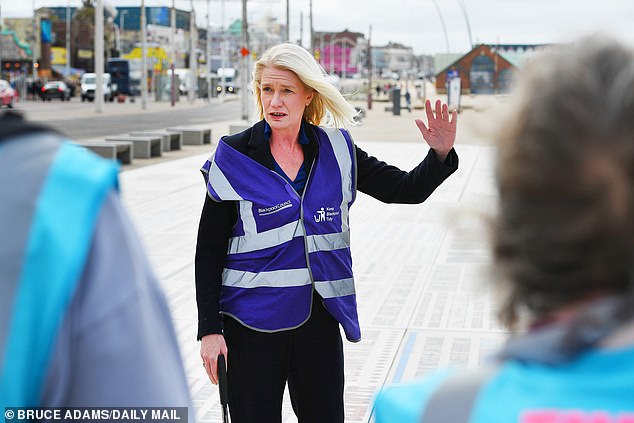 Amanda, pictured preparing to litterpick on Blackpool beach, said she would write to her 363 fellow Conservative MPs to ask them to back the scheme

The pledge card will say: ‘I pledge to do a litter pick so we can all enjoy our local spaces.’ It will also have the supporter’s name on it. Miss Milling is co-chairman of the party with Ben Elliot, the nephew of Camilla, Duchess of Cornwall, and the Government’s food waste tsar.

The Great British September Clean is encouraging everyone to hit the streets, parks and beaches to pick up litter.

It is already backed by the National Trust the Woodland Trust and The Post Office. Carers and thousands of furloughed workers have also signed up, as well as some of Britain’s top companies.

Princess Anne has also backed the cause, speaking of her irritation with fly tippers and urging people to take responsibility for their waste.